The politicians who went to fight during WWI

A new book has revealed the bravery of wartime MPs who ‘led like lions’ from the front during World War One.

Contrary to popular belief many of the country’s politicians did not simply watch the war from the comfort of their armchairs, but rather signed up to lead at the front and many times campaigned to be allowed into the field of battle.

Nearly a third of all MPs (28 per cent) were actively engaged in the war according to statistics published by The Times in April 1915.

Many of them were already in the military and serving in office jobs, before the war broke out, while others decided to put themselves forward for the frontline.

Cyril Gordon Reuss Hibbert was the only son of Sir Henry Flemming Hibbert, Baronet – the Conservative MP for the Chorley Division of Lancashire (1913 to 1918).  Pictured is Hibbert standing, second from right, with four fellow officers from Chorley. From left to right: Capt. Brindle, Capt. Hibbert, Lt-Col. Hindle, Capt. Whitfield, and Capt. Rennard 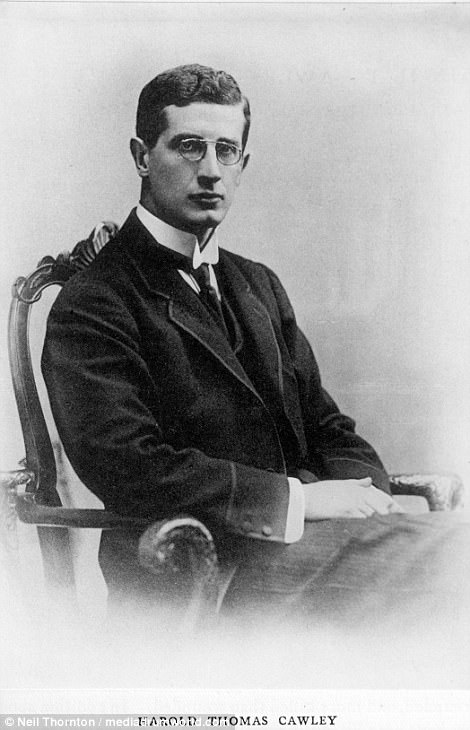 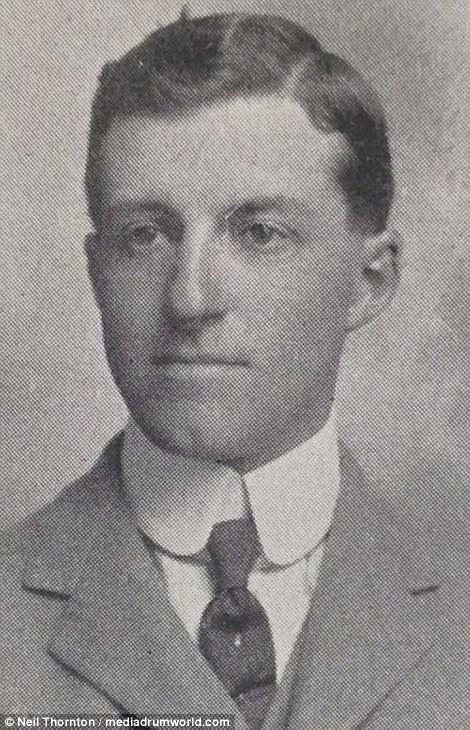 Harold Cawley (left) MP for Heywood in Lancashire from January 1910 until his death in Gallipoli in September 1915 and Arthur O’Neill (right) – the Unionist politician and MP for Mid Antrim. He was a veteran of the Boer War and the first MP to fall in the First World War 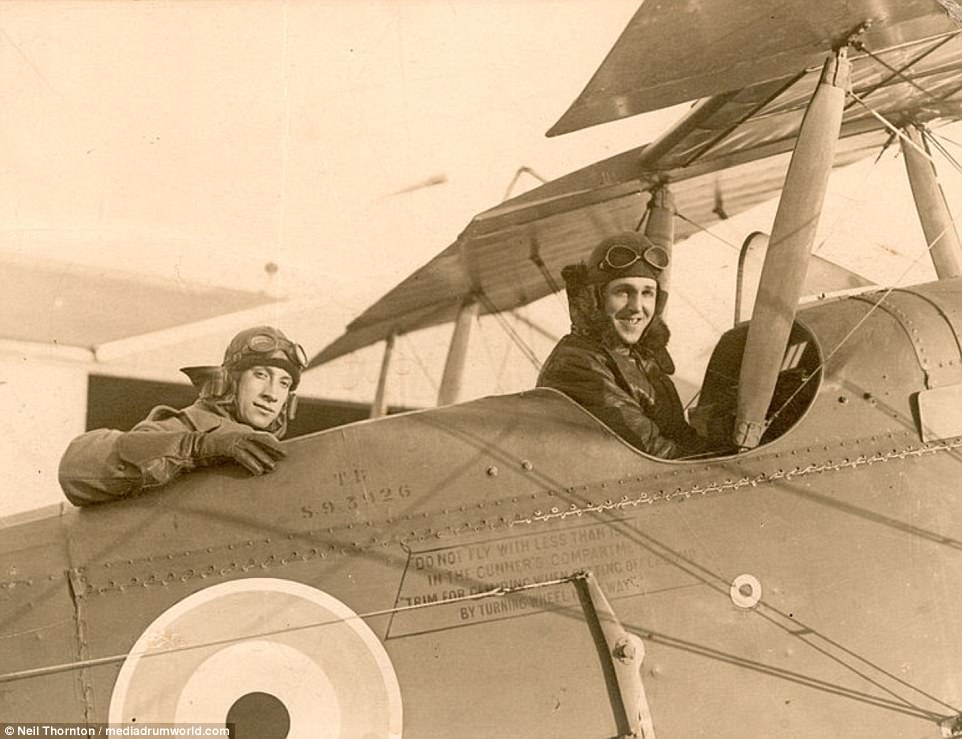 Martin Sheehan, MP for Munster, (right) with his pilot, 2Lt William McCaig, in 1918. Both men were killed when their plane was shot down 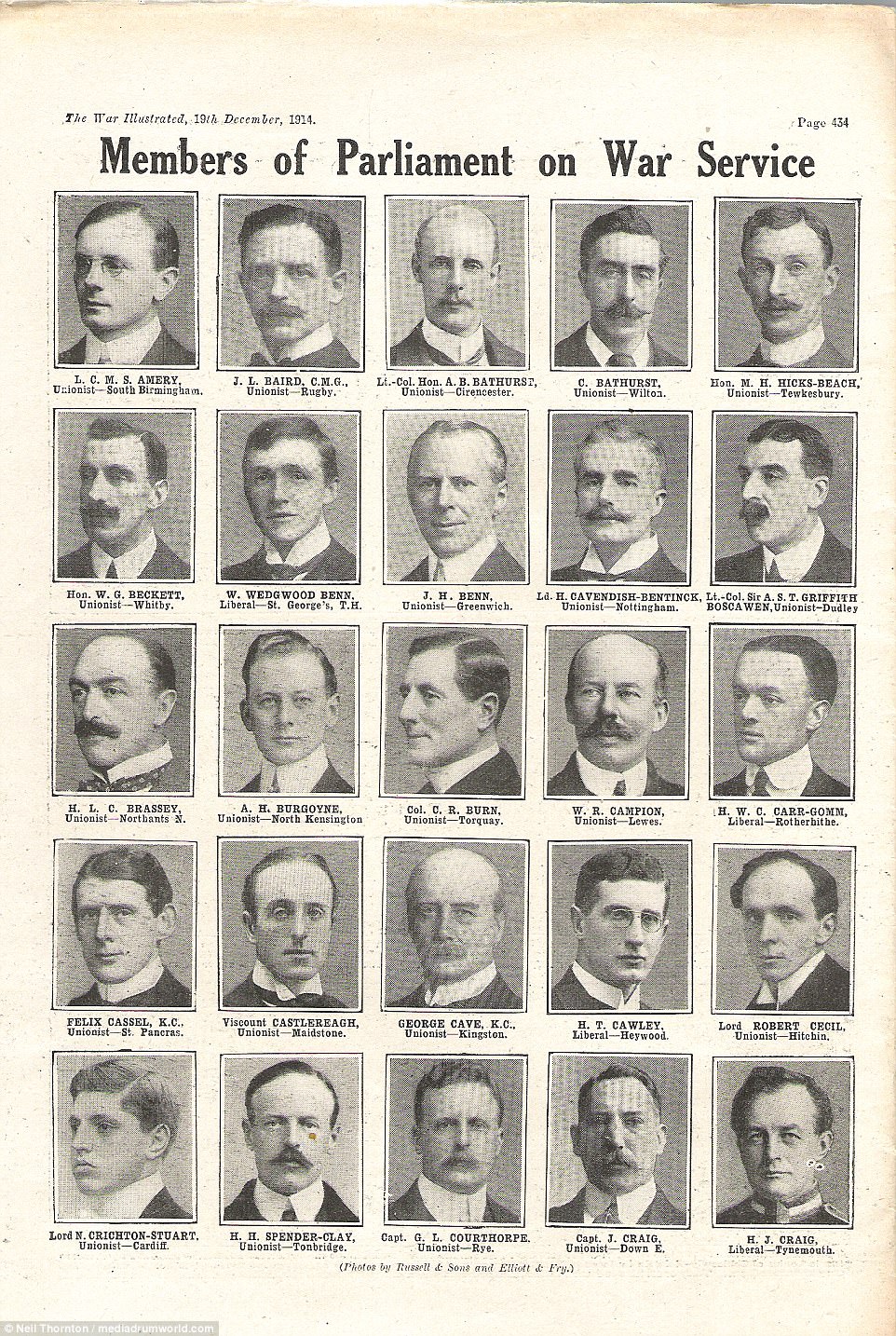 In January 1916, the government saw no alternative but to increase numbers by conscription – compulsory active service.

Parliament was deeply divided but recognised that because of the imminent collapse of the morale of the French army, immediate action was essential and the Military Service Act was passed.

This imposed conscription on all single men aged between 18 and 41, but exempted the medically unfit, clergymen, teachers and certain classes of industrial worker.

Conscientious objectors – men who objected to fighting on moral grounds– were also exempted, and were in most cases given civilian jobs or non-fighting roles at the front. A second Act passed in May 1916 extended conscription to married men.

Conscription was not applied to Ireland because of the 1916 Easter Rising, although in fact many Irishmen volunteered to fight.

Their stories and those of MPs’ sons serving in the war have been told in Neil Thornton’s new book, Led by Lions, published by Fonthill Media.

Harold Cawley was MP for Heywood in Lancashire from January 1910 until his death in Gallipoli in September 1915.

Dissatisfied with a non-combative staff role, Harold moaned for, and succeeded in getting, a return to his battalion.

A detonated Turkish mine created a large crater in no-man’s-land which Cawley sought to make an advanced post.

A desperate fight ensued, with the men exchanging grenades with the enemy in their forward line just 10 yards away.

One of the men was killed after being shot through the head and another was temporarily blinded and deafened by the explosion of a grenade, but the small party maintained their grip throughout the day and night. 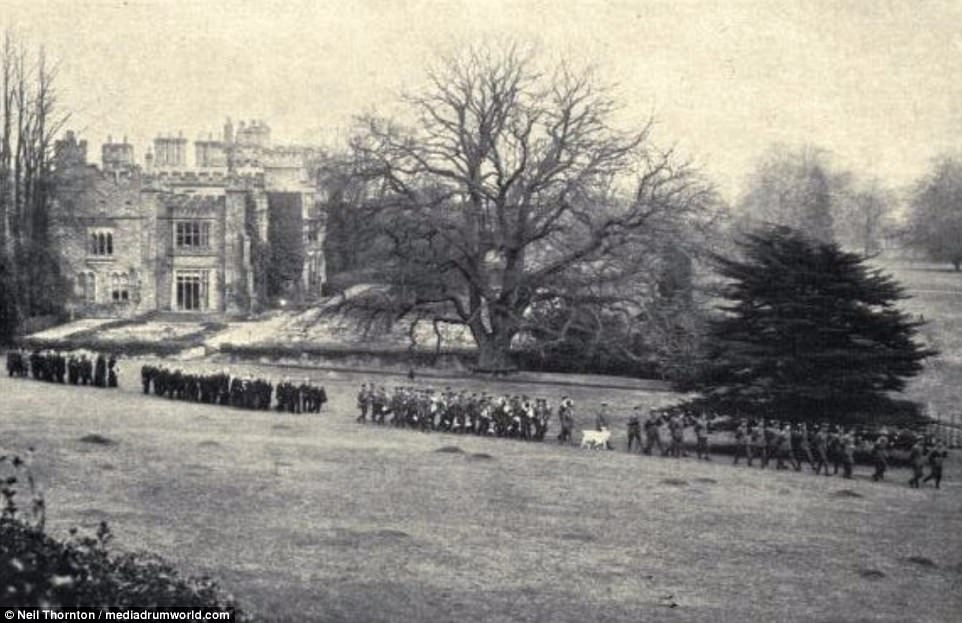 The funeral procession of Lt William Gladstone, 2nd Battalion Royal Welsh Fusiliers, departs from Hawarden. The procession went on to pass through the streets of Hawarden where crowds of well-wishers lined the streets and buildings. Despite his popularity, the repatriation of William’s body from France would influence the decision to cease the future return of fallen soldiers 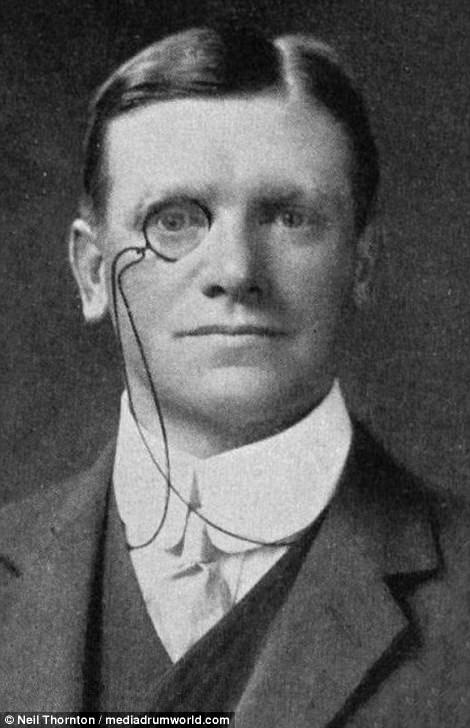 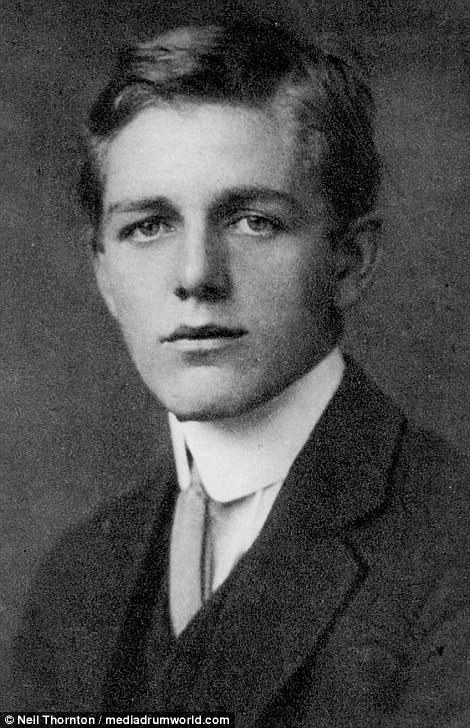 Liberal Party Politician Edward Shortt KC (left). His only son, Dudley, was killed in action by shellfire while employed at Battalion HQ. Pictured (right) is Francis McLaren, known as ‘Macauley’ to his friends, MP for Spalding at the age of 24. He served with distinction in the Dardanelles before transferring to the RFC. He was discharged without his knowledge but after much effort was reinstated before losing his life 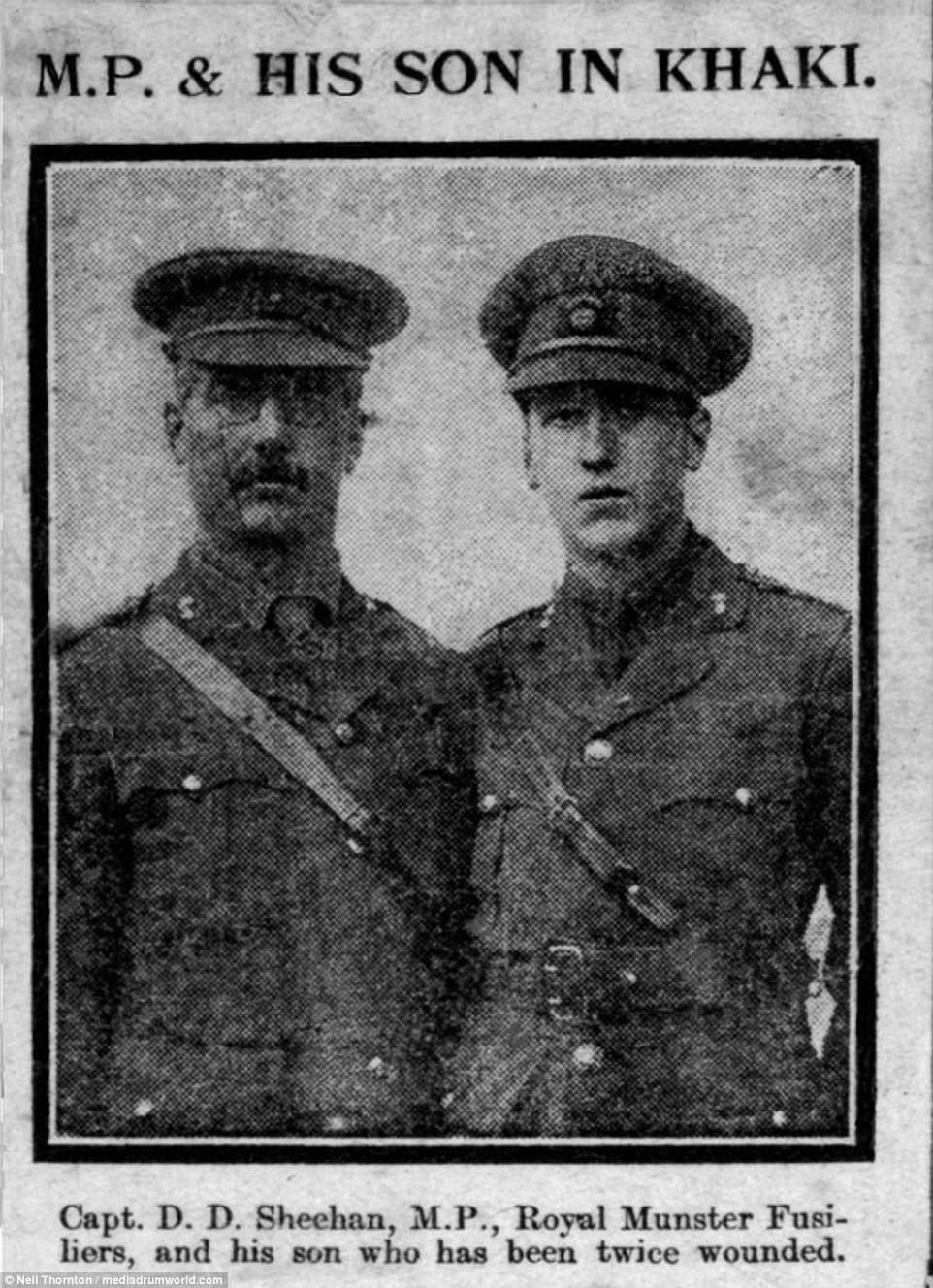 Michael Sheehan, the younger brother of Daniel and Martin, pictured here with his father, Capt. D. D. Sheehan MP, both of whom served with the Royal Munster Fusiliers 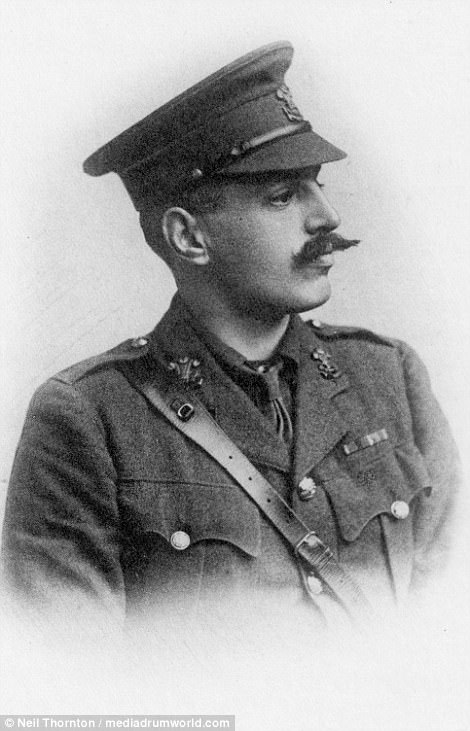 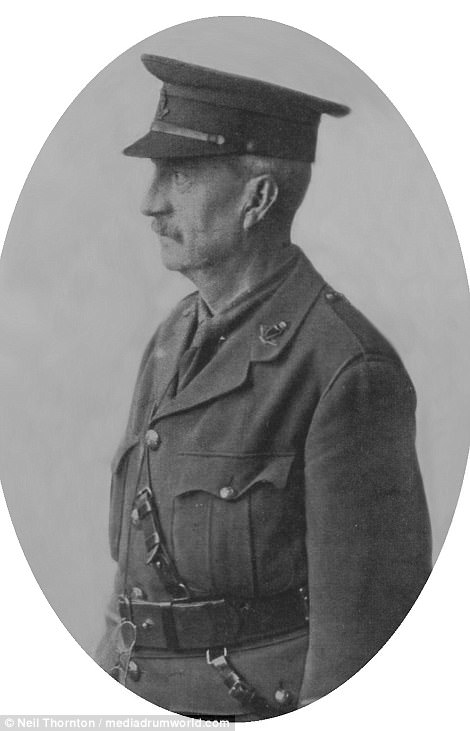 By the following night, it was suspected that the Turks were digging a trench towards the crater. This was a serious concern as it could serve as a ‘jumping off’ position for them to rush the crater, or they could be planning another explosion.

Just after midnight, Cawley, while endeavouring to see what they were doing, was shot through the temple by an enemy sniper. The crater in which he was killed defending was named ‘Cawley’s Crater’ in his honour.

‘It is not widely recognised or, indeed, appreciated that politicians were shedding their own blood on the field of battle, and those that were not, be it through age or other reason, certainly were affected, just like the public they represented,’ writes Thornton in the book’s introduction. 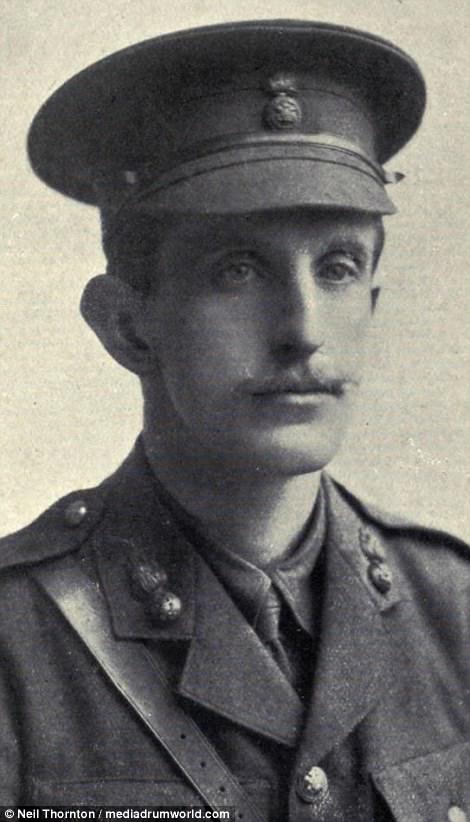 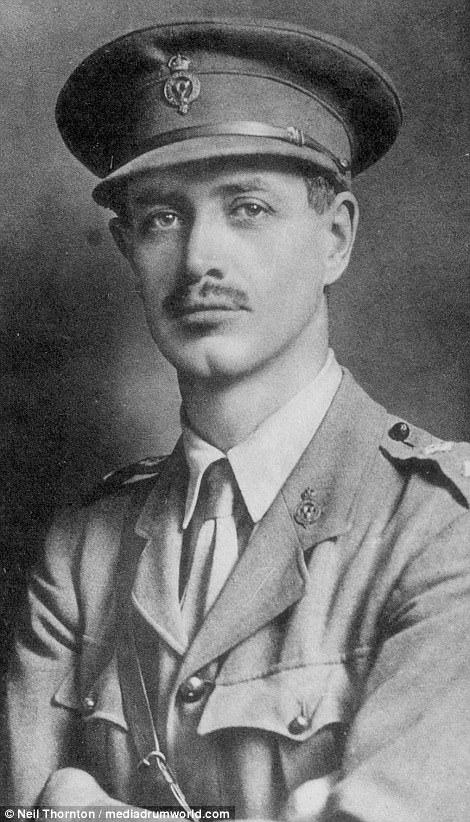 Lt William Gladstone, 2nd Battalion Royal Welsh Fusiliers, in 1915 (left). His main worry was that he would let his men down. He was killed in action while looking for a sniper that had been firing on them. Oswald Cawley MP for Prestwich (right). Oswald was wounded twice in the action that ultimately cost him his life. He lies buried near his brother, John, who was killed in September 1914 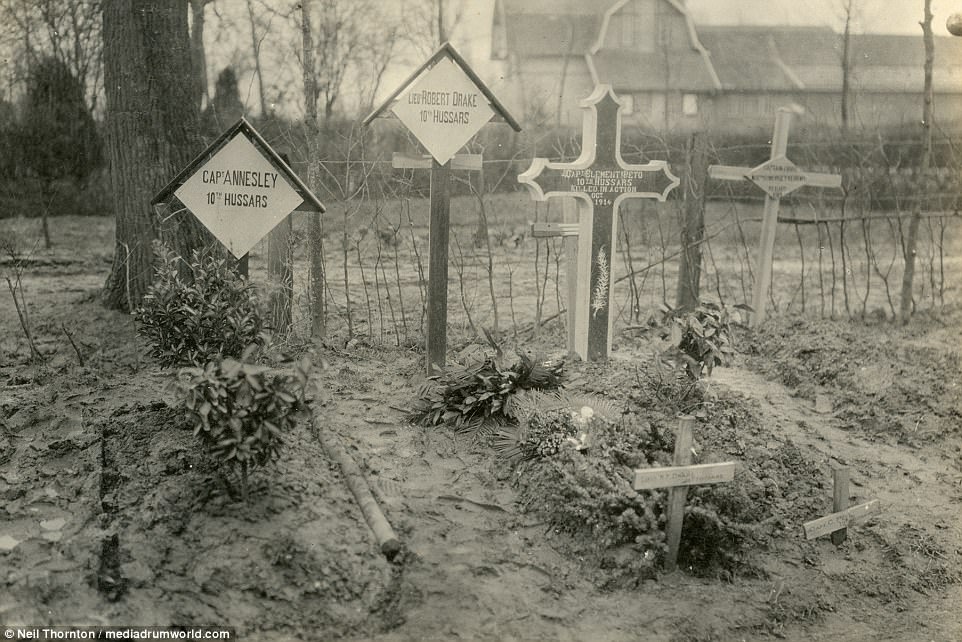 Pictured is a contemporary grave marker for Captain Annesley. Nearly a third of all MPs (28 per cent) were actively engaged in the war according to statistics published by The Times in April 1915 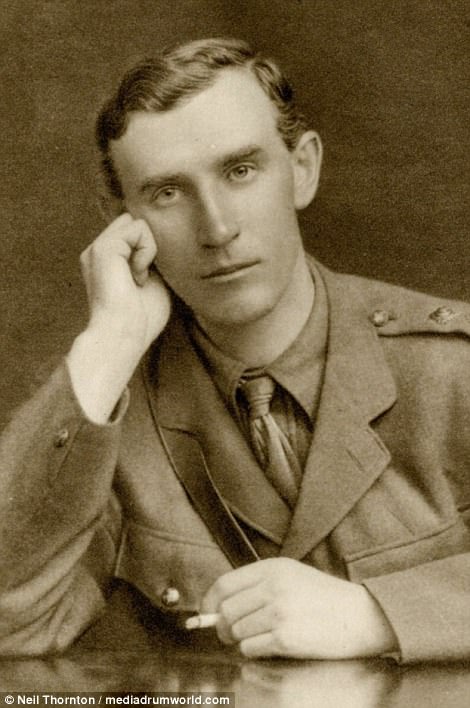 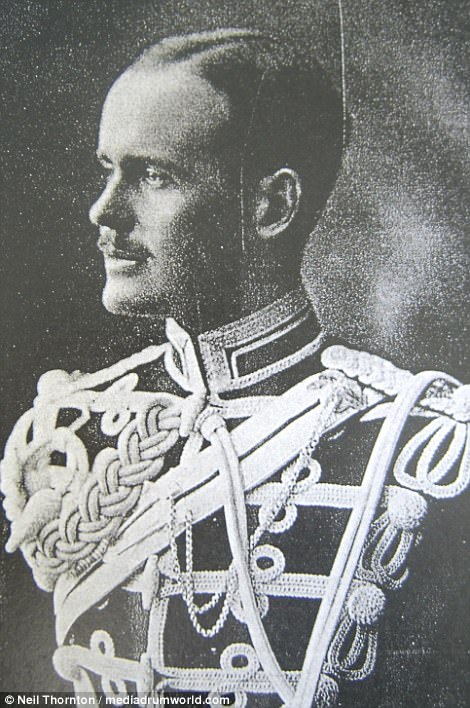 Lt Raymond Asquith (left) with his trademark cigarette. His efforts to get back to his men prior to the Somme offensive would earn him widespread respect and admiration, but it would also cost him his life. His father, Herbert Henry Asquith, served as the Prime Minister 1908 to 1916. Maj. Valentine Fleming (right) was killed in action while running across the open during a heavy enemy barrage in an attempt to reach his men who were manning a forward position

‘The ‘Lions Led by Donkeys’ school of thought—a phrase aimed at high-ranking officers and politicians—is a sweeping generalisation that often falls extremely wide of the mark.

‘Through their own efforts to seek active service, and despite being exempt due to their occupation, many would go to extraordinary lengths to enter a theatre of war and fight.’

The bravery of many MPs extended to their own families and a lot of politicians felt the loss of a loved one as many sons signed up and died in the Great War. 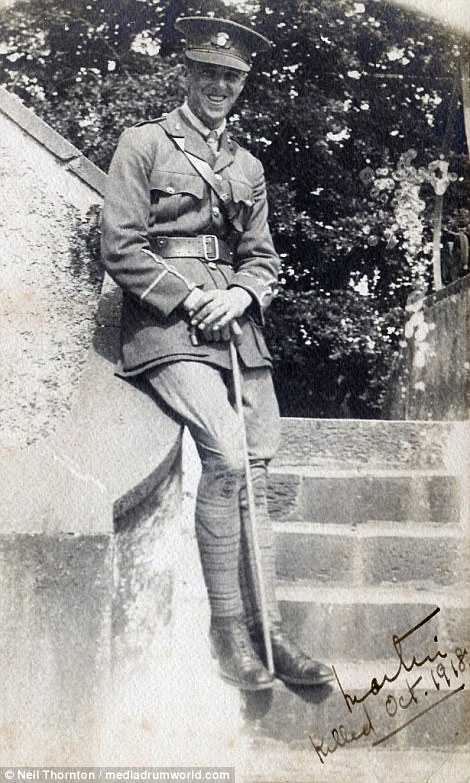 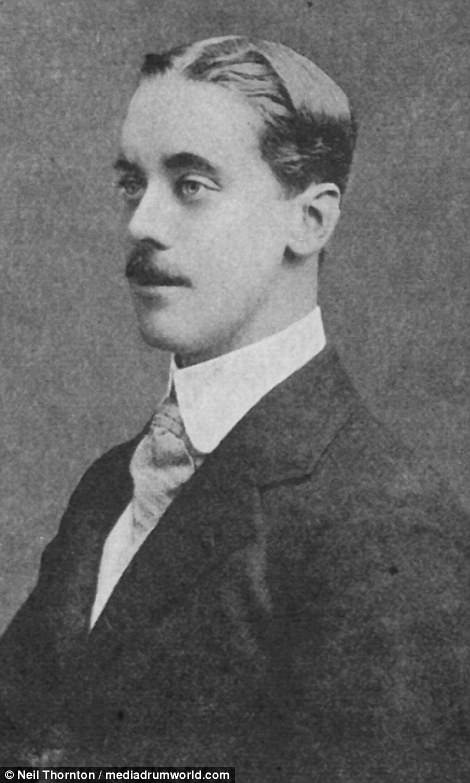 Martin Sheehan in 1917 in Cork while at home on leave (left). He would return to his duties only to be shot down, the specific circumstances of which are not known. Thomas Charles Reginald Agar-Robartes, MP for St Austell (1908 to 1915) – dubbed a most-eligible bachelor and the best-dressed man in Parliament. He was described as ‘absolutely fearless’ in battle and was recommended for the Victoria Cross 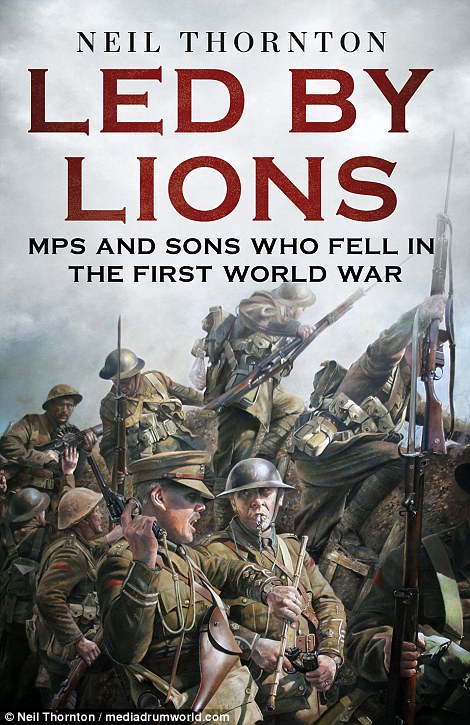 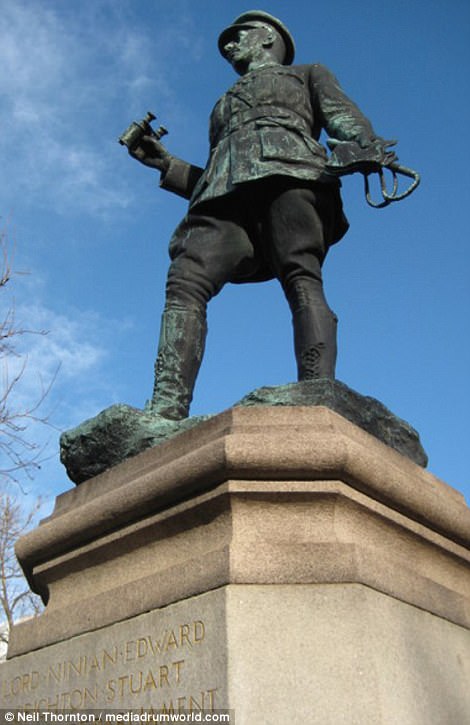 Led by Lions: MPs and Sons Who Fell in the First World War, by Neil Thornton and published by Fonthill Media is available now (left). In 1919, the statue of Lord Ninian was unveiled in Gorsedd Gardens in Cardiff (right) 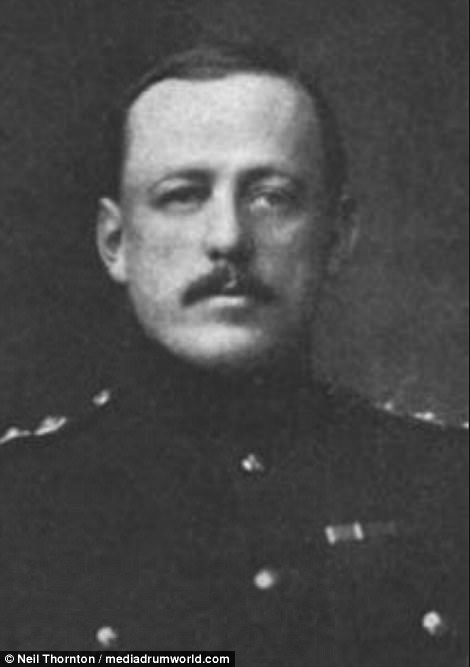 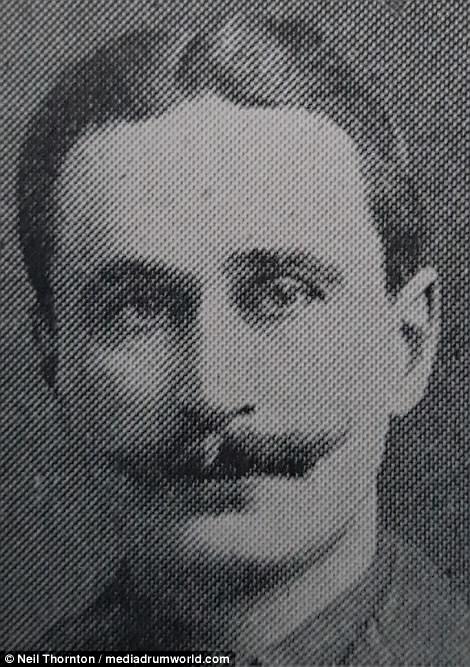 Lt-Col. Duncan Campbell – wounded at Spion Kop during the Boer War and severely wounded in November 1914 (left). Gallant to his last breath. Mortally wounded while leading his men into an enemy trench, Basil Moon (right), died of his wounds, but not before writing a note to his commanding officer, apologising for being shot

One such example is the Counsel to the Speaker of the House of Commons, Sir Ernest Moon, KCB, KC, who received notification that, on May 24 1915, his son, Lieutenant Basil Moon of the Post Office Rifles, had died of wounds received in action at Festubert.

Gallant to his last breath and mortally wounded while leading his men into an enemy trench, Basil Moon died of his wounds, but not before writing a note to his commanding officer, apologising for being shot.

Led by Lions: MPs and Sons Who Fell in the First World War, by Neil Thornton and published by Fonthill Media is available now.

How did World War One start? The shooting of Austro-Hungarian Archduke and the bloody campaign that followed

In the event, which is widely accepted to have sparked the outbreak of World War One, Archduke Franz Ferdinand – the nephew of Emperor Franz Joseph and heir to the Austro-Hungarian Empire – was shot dead.

He was assassinated in Sarajevo, the capital of Bosnia and Herzegovina, along with his Serbian wife, Sophie, on June 28, 1914.

Eventually killed by 19-year-old Gavrilo Princip, the couple had earlier that day been attacked by another man who threw a grenade at their car.

Archduke Ferdinand was shot in the neck, while his wife was hit in the abdomen. The assassination is believed to have started a domino effect which led to the break out of World War One a month later.

Princip and others wanted Bosnia to become part of Serbia.  Austria-Hungary, like many in countries around the world, blamed the Serbian government for the attack and hoped to use the incident as justification for settling the question of Slav nationalism once and for all.

As Russia supported Serbia, an Austro-Hungarian declaration of war was delayed until its leaders received assurances from German leader Kaiser Wilhelm that Germany would support their cause in the event of a Russian intervention–which would likely involve Russia’s ally, France, and possibly Britain as well.

On July 28, Austria-Hungary declared war on Serbia, and the tenuous peace between Europe’s great powers collapsed. Within a week, Russia, Belgium, France, Great Britain and Serbia had lined up against Austria-Hungary and Germany, and World War One had begun.

Artillery units of Austria-Hungary began to rain down shells on Belgrade, the Serbian capital – the very first shots of World War One.

That attack was to start a chain reaction that, within weeks, embroiled all of the world’s great powers into a global war which mobilised more than 70 million military personnel. The Great War – as it was soon to be known – was the first military conflict to be fought on an industrial scale.

But the technological advances that led to increases in the lethality of weapons were not matched by changes in strategy, with both sides resorting to practically suicidal human wave attacks.

Although much of the warfare took place in Europe, battle was soon joined across the planet via the colonies of the European imperial powers.

By 1918, the powers of Central Europe were exhausted by fighting. A final last-ditch offensive along the Western Front by Germany was successfully repelled and, as U.S. forces began to enter the trenches, the Allies staged a series of successful advances, forcing the enemy to surrender on November 11.