A shocking number of parents aren’t properly positioning their newborns in their car seats – and it’s a mistake that could be potentially fatal.

A study, first published in the Journal of Pediatrics, found as many as 95 per cent of parents were making at least one major error when installing car seats and securing their child.

However, one mistake was found to be most prevalent among 86 per cent of parents taking part in the 300-strong research group.

This mistake was failing to place a newborn in the correct position in their car seats.

Tips for a rear-facing car seat:

* Ensure the chest clip is at armpit level

* The harness should be snug and not twisted

* Rear-facing shoulder straps should be level with, or just below, shoulders

Researchers questioned a group of mothers aged between 24 – 35 after they had been observed by certified child passenger safety technicians as they used their car seats.

‘A number of studies have shown that an incorrect angle of recline can lead to injury to babies, especially if too upright, as the baby’s head can flop forward and obstruct the airway,’ said study author Dr Benjamin Hoffman, speaking to Popsugar.

‘Having a chest clip too low can allow the baby to slump, and there have been cases of strangulation as a result.’

Findings from the study also revealed 77 per cent of car seats were installed incorrectly. 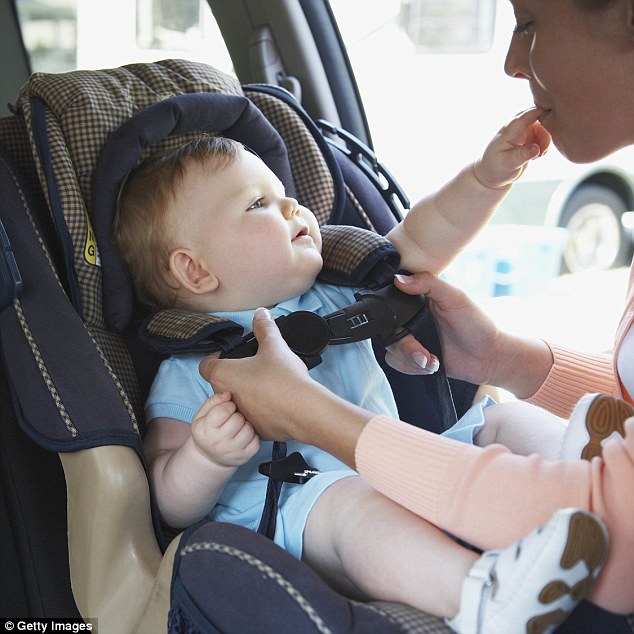 ‘A number of studies have shown that an incorrect angle of recline can lead to injury to babies, especially if too upright,’ said study author Dr Benjamin Hoffman

Other results also showed half of the participants made up to five errors, while just 20 per cent only made a single mistake.

The results of the study note 89 per cent of the mistakes were deemed ‘critical’.

The most common errors made by close to 70 per cent of families were not correctly placing the harness webbing snugly over the child.

This was followed by one-third placing the harness retainer clip too low, and 31 per cent using an incorrect harness slot.

Children under six months must use a rear-facing child restraint with an inbuilt harness. They must not sit in the front row if the vehicle has two or more rows of seats.

Children aged six months to under four years must use a rear-facing or forward-facing child restraint with an inbuilt harness. They must not sit in the front row if the vehicle has two or more rows of seats.

Children aged four years up to seven years must use a forward-facing approved child restraint with an inbuilt harness, or an approved booster seat with a properly fastened and adjusted seatbelt or child safety harness.

They can sit in the front row only if all other rear seats are occupied by children under seven years, in vehicles with two or more rows of seats.