Anyone who hopes that taking regular exercise can compensate for being overweight should think again.

For women, there really is no such thing as being fat and fit, a study has found.

Even if you are free from high blood pressure, high cholesterol or type 2 diabetes, you are still far more likely to have a heart attack or stroke if you’re overweight, researchers say.

The ‘fat but fit’ theory suggests that, in those who are obese, extra weight is not harmful if other metabolic factors such as blood pressure and blood sugar are within recommended limits.

Anyone who hopes that taking regular exercise can compensate for being overweight should think again. Stock photo

But German researchers who studied more than 90,000 women aged 35 to 55 found those who were obese but metabolically healthy still had a more than 50 per cent greater risk of cardiovascular disease than those of normal weight.

Professor Matthias Schulze, of the German Institute of Human Nutrition, said: ‘Metabolically healthy obesity is not a harmless condition, and even women who remain free of metabolic diseases for decades face an increased risk of cardiovascular events.’

Obesity – having a body mass index of over 30 – is linked to a range of health problems, yet around a third of obese people are considered metabolically healthy.

Last year, Dutch research claimed people could wipe out the dangers of obesity if they were active for at least four hours a day. 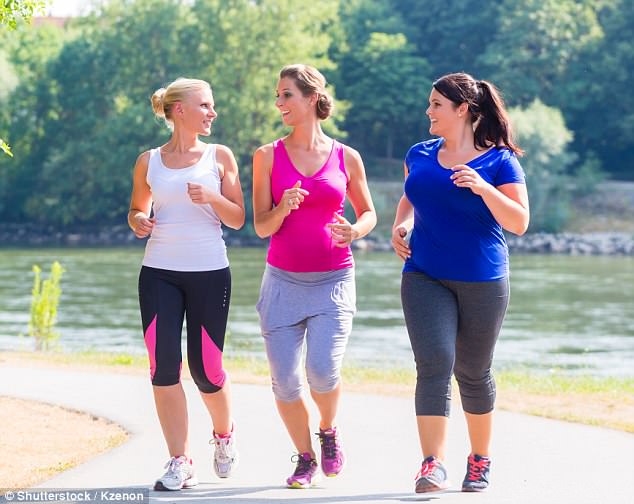 But the German study adds to the evidence that carrying too many pounds is bad for your health however much you exercise.

It asked 90,257 women to complete questionnaires about their BMI, health and lifestyle every two years between 1980 and 2010.

Obese women who were metabolically healthy still had a 57 per cent higher risk of developing cardiovascular disease.

All metabolically unhealthy women had an especially high risk – even those of normal weight were around two and a half times more likely to develop it.

Professor Schulze said: ‘Long-term maintenance of metabolic health is a challenge for overweight/obese, but also for normal-weight women.’