This is the moment an angry mob pummels a bloodied thief while he is handcuffed to a lamp-post after he allegedly broke into a flat in Argentina.

Two men, 35 and 41, are alleged to have tied up a female shopkeeper in Buenos Aires last Wednesday.

They are said to have robbed her shop before taking her flat keys and breaking into her home where they came across her husband who summoned help.

Disturbing footage shows a mob surrounding one of the alleged crooks, who bleeds profusely from the head, his blood spattering the pavement as they land blows. 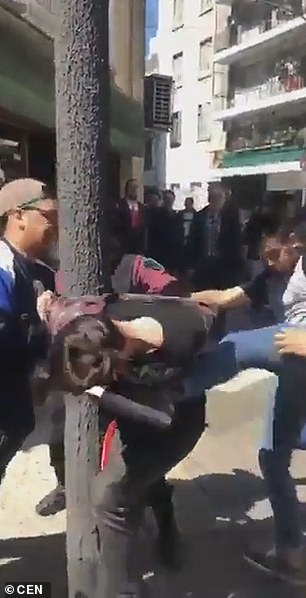 The alleged thief buckles (left) after being battered (right) by furious men on the roadside in Buenos Aires, Argentina last week

A female police officer can be seen frantically trying to radio for help as she handcuffs the suspect to a lamp-post.

She tries to protect him from the angry men but they are too many and one can be seen kicking him across the midriff.

Another slaps the suspect across the top of his head before his legs give way and he falls to the floor. 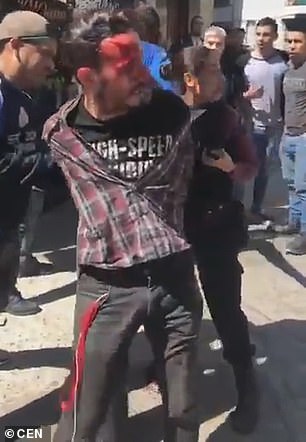 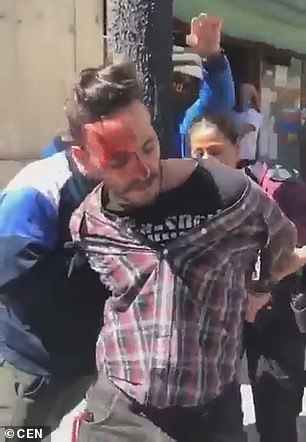 The other criminal was also arrested at a nearby road junction, local media reported.

A criminal case into attempted robbery, unlawful deprivation of liberty and causing injuries has been opened, reports said.

Paramedics treated the female shop owner for an injury to her head and her husband was attended for injuries to his hands after he tried to break a window and ask for help.