‘This is disgusting’: Mum shares her kid’s VERY unusual lunchbox request – and she’s not the only one sending bizarre food combinations to school

A mum has shared the unusual request she received from her son when preparing his school lunchbox.

Sharing images to a popular parenting Facebook group, mum Jenni said her son asked if she could add cheese to his Nutella sandwiches.

Rather than questioning his taste, she instead embraced his appreciation for the odd combination of ingredients, which inspired hundreds of other parents online to do the same. 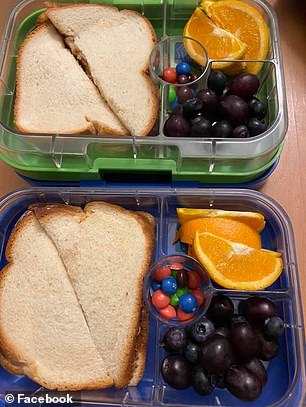 Sharing images to a popular parenting Facebook group, mum Jenni said her son asked if she could add cheese to his Nutella sandwiches

Jenni, believed to be from the US, shared a photo of the lunchbox filled with the sandwich along with sliced oranges, grapes, blueberries and m&m’s.

‘I would like bonus points for practicing what I preach and not “yucking'”my son’s “yum”, which is Nutella and cheese sandwiches… he truly loves them and devours it,’ she wrote online.

Jenni said her son first discovered the cheese and Nutella combination when making his own sandwiches.

‘I pretty much never make it for him but he asked… I obliged. Anyone else’s kids have absurd tastes?’ she asked.

The social media post was flooded with more than 500 comments from other parents who shared their children’s ‘odd’ tastes.

‘My daughter eats raw whole white onions like an apple. She loves carrots dipped in barbecue sauce and so many others I can’t even think of right now,’ one woman wrote.

‘Not too weird but my son pours syrup on his scrambled eggs like they’re pancakes,’ another admitted.

‘My son used to make peanut butter, jelly and fried egg sandwiches when he was about seven,’ a third wrote.

One woman said her son will dip ‘anything in tomato sauce’, including fruit, while another said her daughter enjoys eating peanut butter sandwiches with cheese.

It is important to keep offering healthy lunch box choices in a variety of ways, as children learn to eat what is familiar to them

Foods to pack in lunchboxes: