Thousands of anti-Brexiteers join ‘No to Boris, yes to Europe’ march

Thousands of protesters gathered in Westminster today to march against Brexit and Boris Johnson becoming the next Prime Minister.

The ‘No to Boris, yes to Europe’ protest saw people dressed in elaborate costumes to mock Johnson, Nigel Farage and Theresa May ahead of the former Foreign Secretary’s likely election as Conservative Party leader and Prime Minister on Tuesday.

It got underway at Mayfair’s Park Lane and protesters marched to Parliament Square in Westminster.

They carried anti-Boris placards, painted EU flags on their faces and even flew a giant inflatable balloon modelled on the leadership candidate and inspired by the Trump baby blimp.

It was spotted flying in Parliament Square and the blimp had pink skin and dishevelled yellow hair, with a ‘Brexit bus’ t-shirt emblazoned with Johnson’s claim about extra funds for the NHS upon departure from the EU.

The protesters carried several anti-Brexit and anti-Boris Johnson placards, including this man dressed as a clown with a sign that reads: ‘On our way to Clowning Street’ 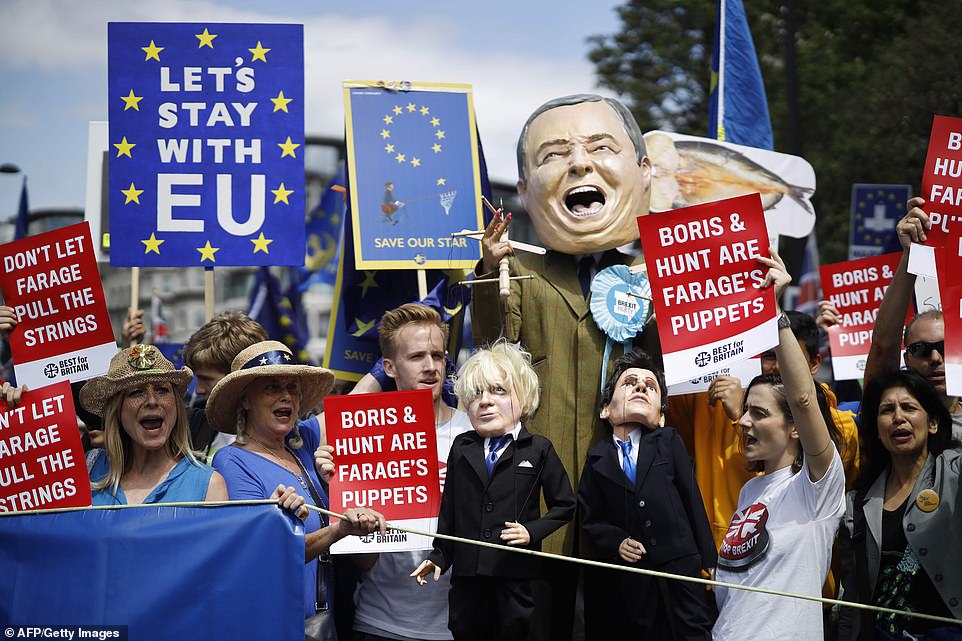 As well as Johnson, his leadership rival Jeremy Hunt and Brexit Party leader Nigel Farage were targeted, with protesters accusing Johnson and Hunt as being Farage’s puppets 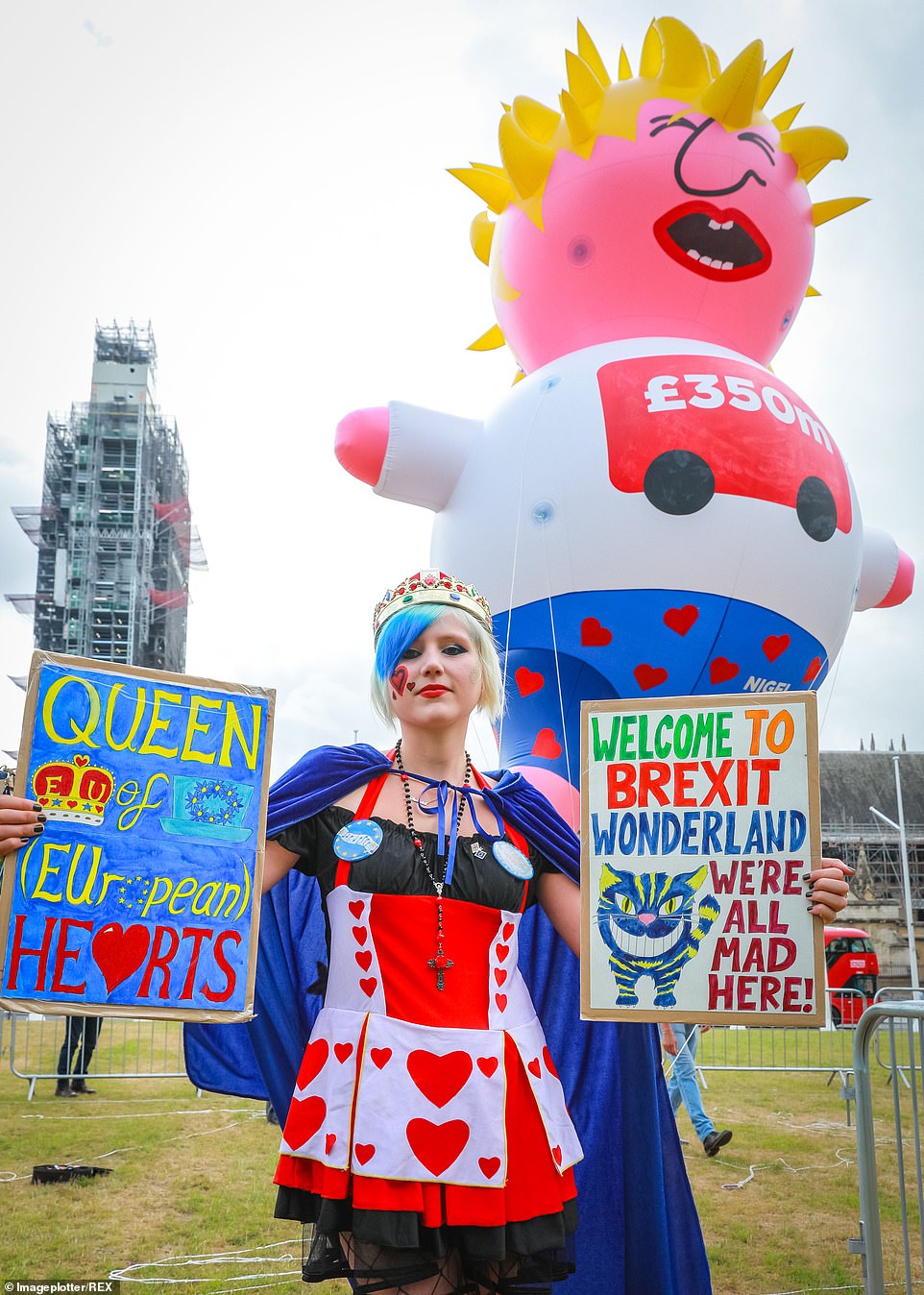 ‘EU Supergirl’ Madeleina Kay protests with the Blimp. The ‘Boris Blimp’, a giant, oversized inflatable figure made to look like Boris Johnson, makes its debut in Parliament Square 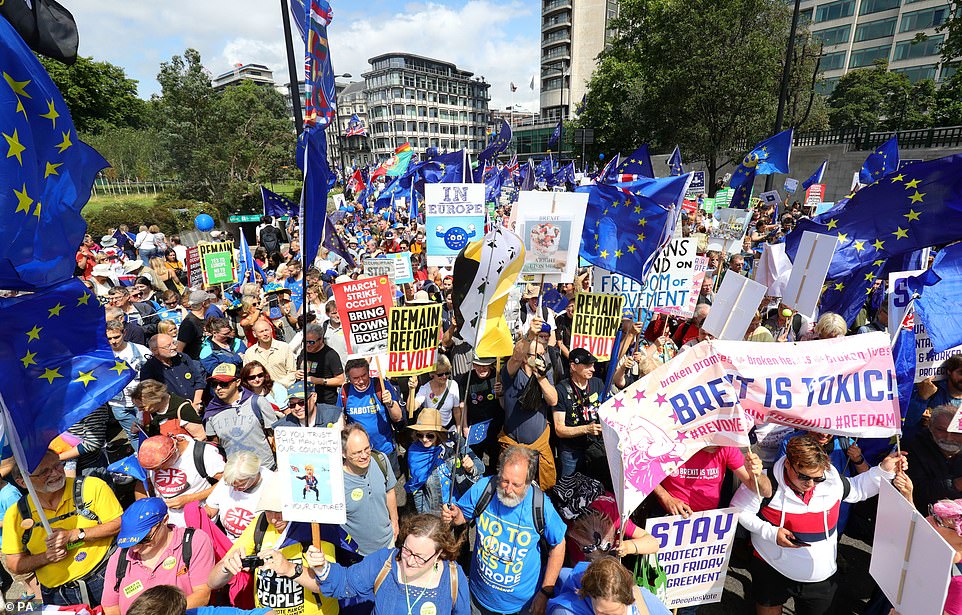 Thousands of Pro-European Union supporters gather in central London, for the March for Change today while also slamming Boris Johnson 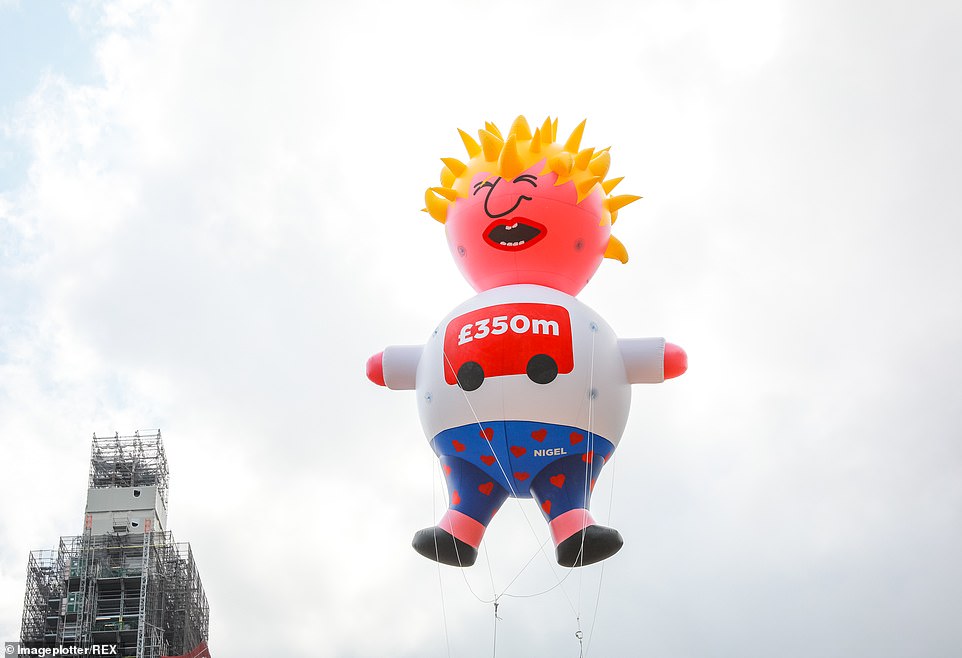 The giant inflatable balloon modelled on the leadership candidate and inspired by the Trump baby blimp had pink skin and dishevelled yellow hair, with a ‘Brexit bus’ t-shirt emblazoned with Johnson’s claim about extra funds for the NHS upon departure from the EU 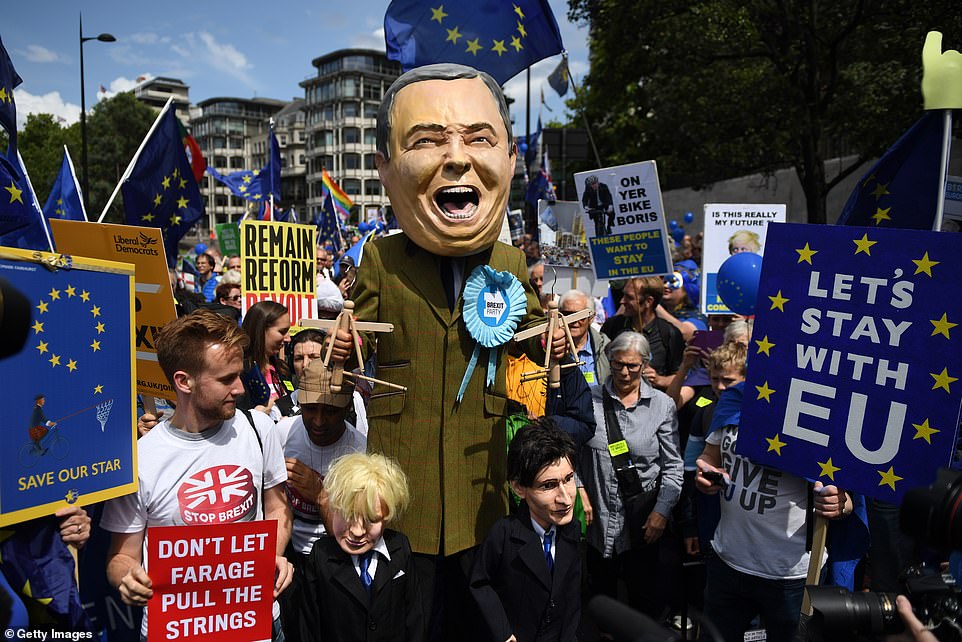 Protesters with a large effigy of Nigel Farage which is controlling puppets of Boris Johnson and Jeremy Hunt march to Parliament Square in Westminster during the ‘No To Boris, Yes To Europe’ March 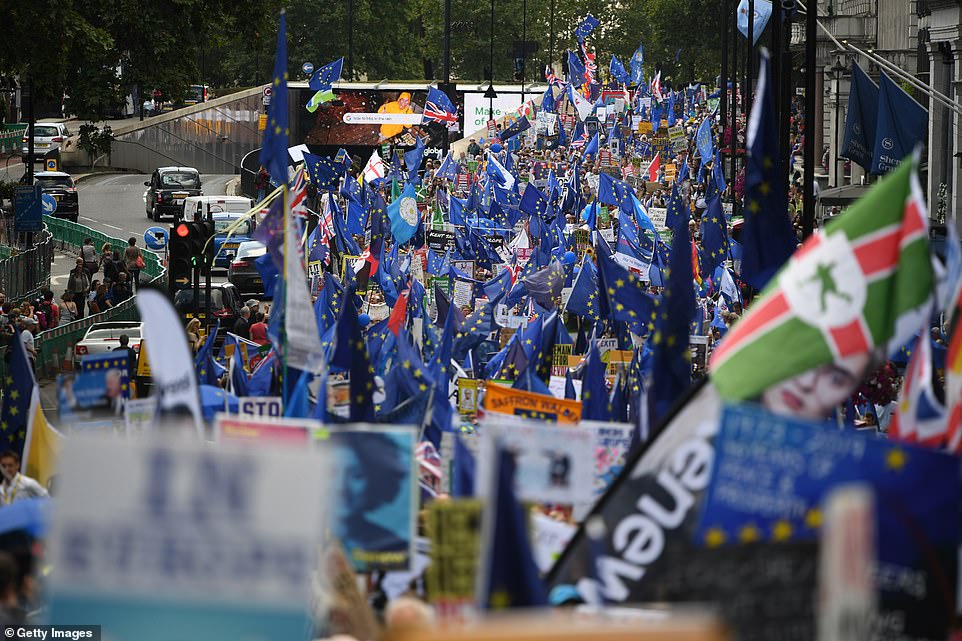 Tom Brufatto, Chair of Britain for Europe said: ‘The Boris Blimp might seem a bit of lighthearted fun but it carries a serious message.

‘We will not allow Boris Johnson to float into Number 10 on a favourable tailwind, or have the summer off, unopposed, after so much hot air on Brexit, with so much at stake.’

A spokesperson for March for Change told MyLondon that the cost of the blimp is comparable to that of the Trump Baby, £16,000.

A crowdfunder for the blimp has so far raised over £5,300 but March for Change expect it to eventually cover the whole cost.

Carrying a sign with Mr Johnson’s face superimposed on Mr Blobby, Richard Gibbon said he was ‘appalled’ at the prospect of the former foreign secretary moving into No 10. 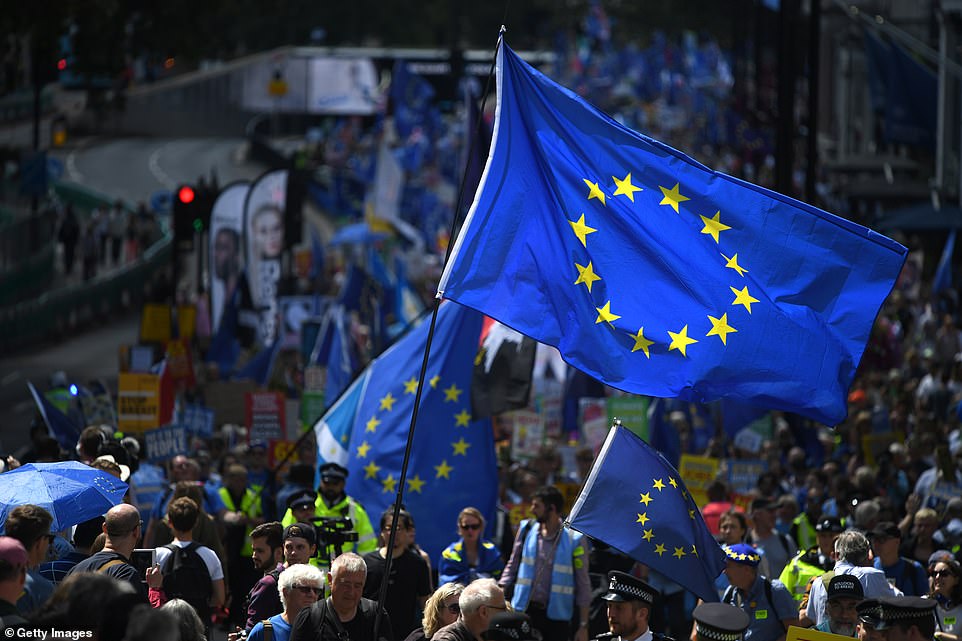 Protesters holding a European flag march to Parliament Square in Westminster during the ‘No To Boris, Yes To Europe’ March today 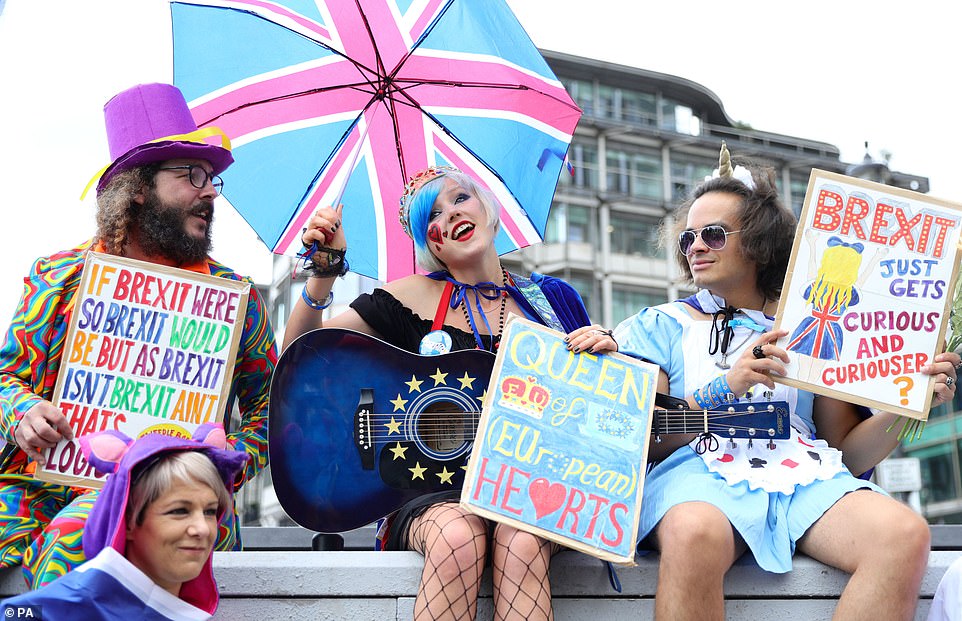 Pro-European Union supporters gather in central London, ahead of the March for Change, which attracted thousands of protesters 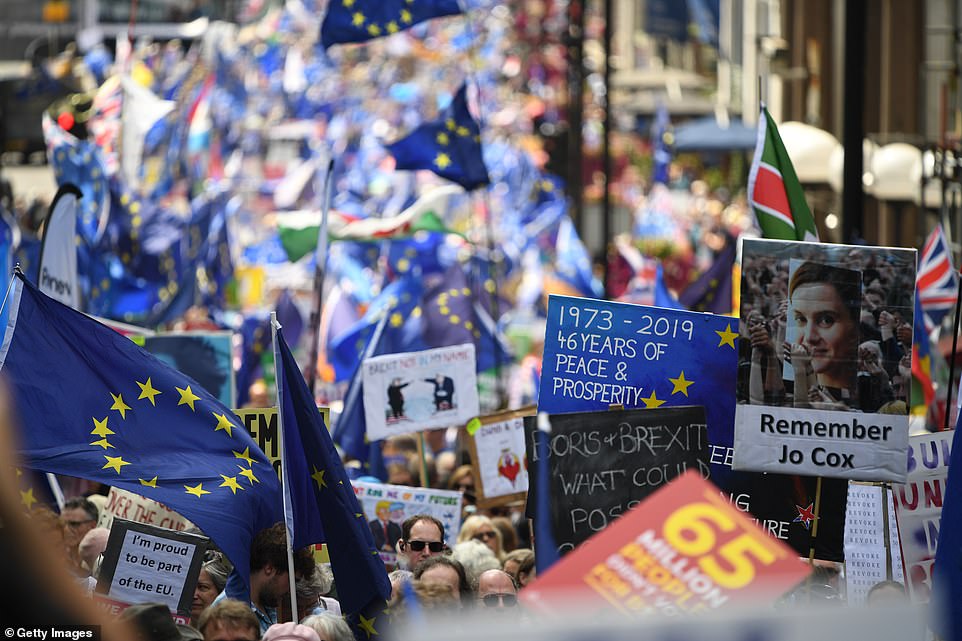 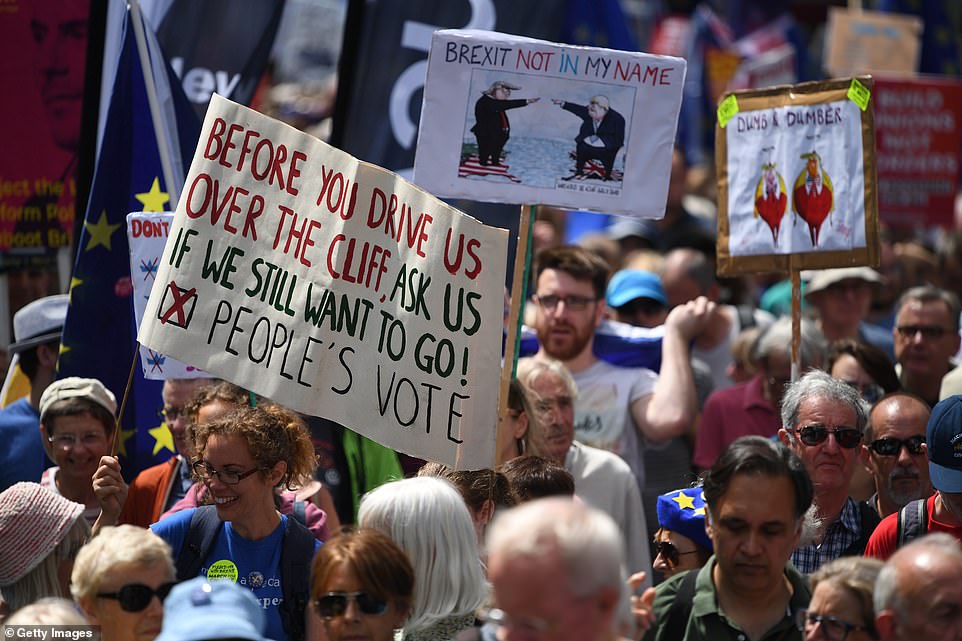 The protesters are demanding a reversal of the EU referendum result, with this placard insisting another vote would have a different outcome 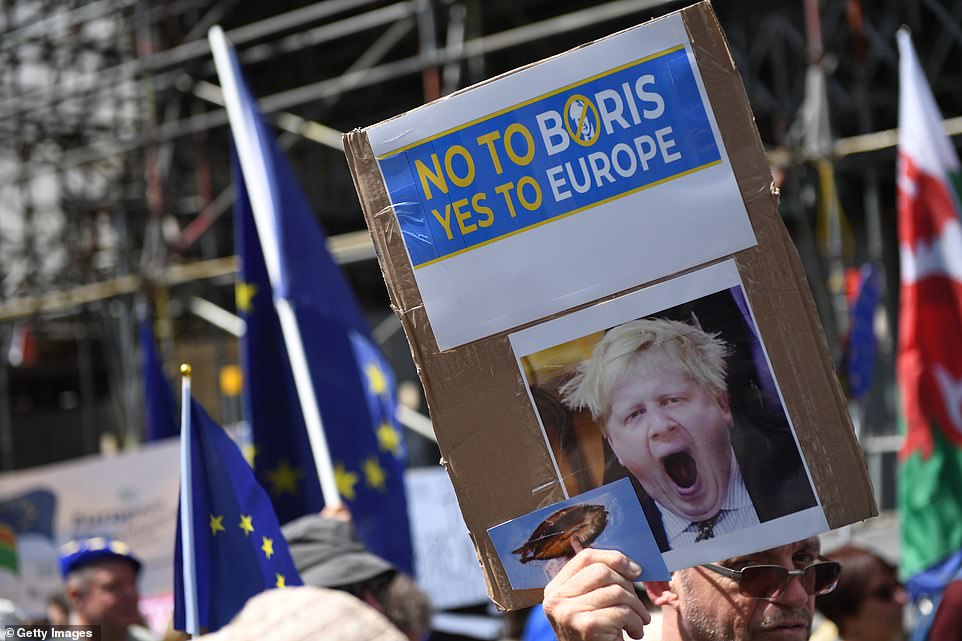 Protesters holding placards march to Parliament Square in Westminster during the ‘No To Boris, Yes To Europe’ March, some held up images of kipper in reference to a recent statement by Johnson 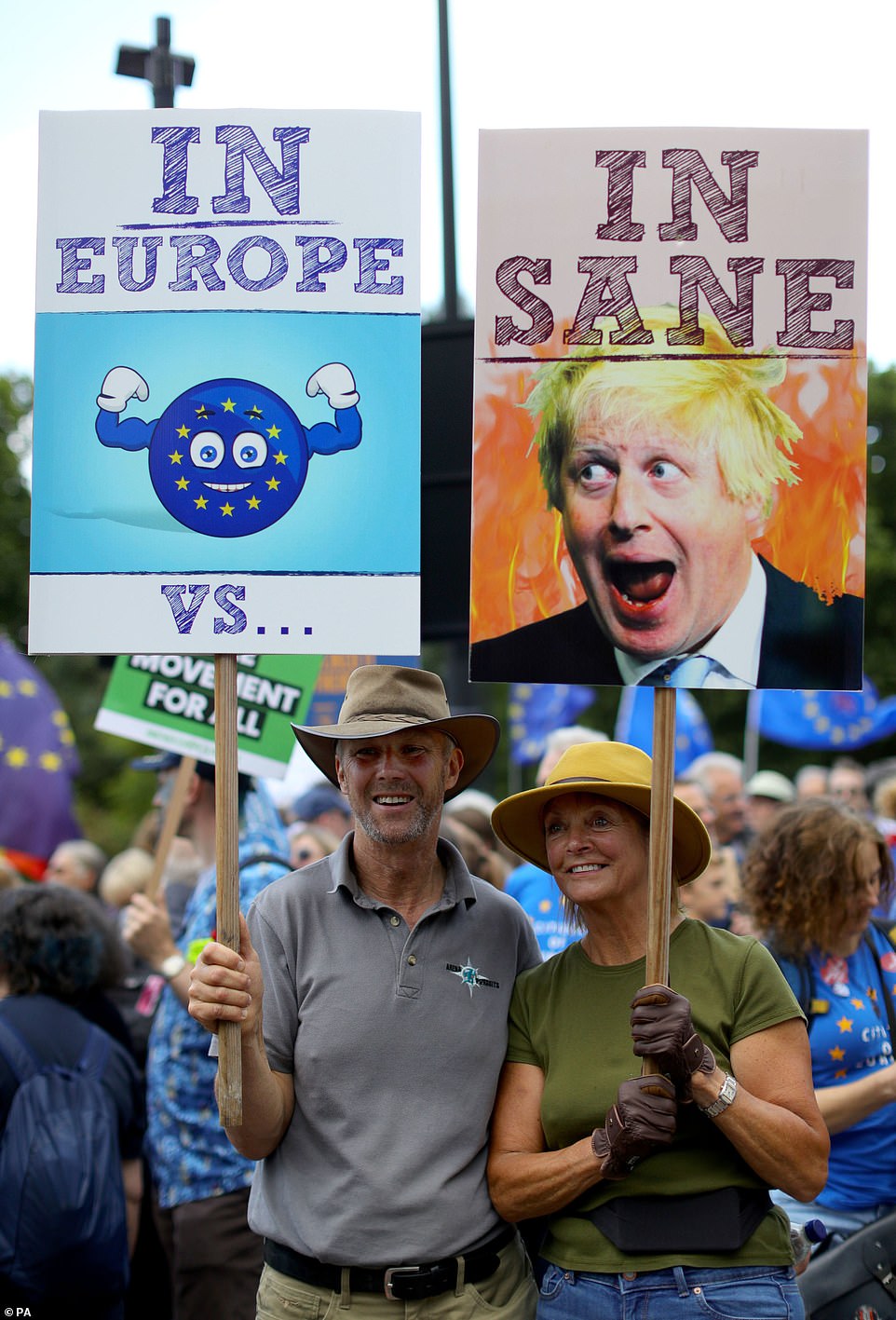 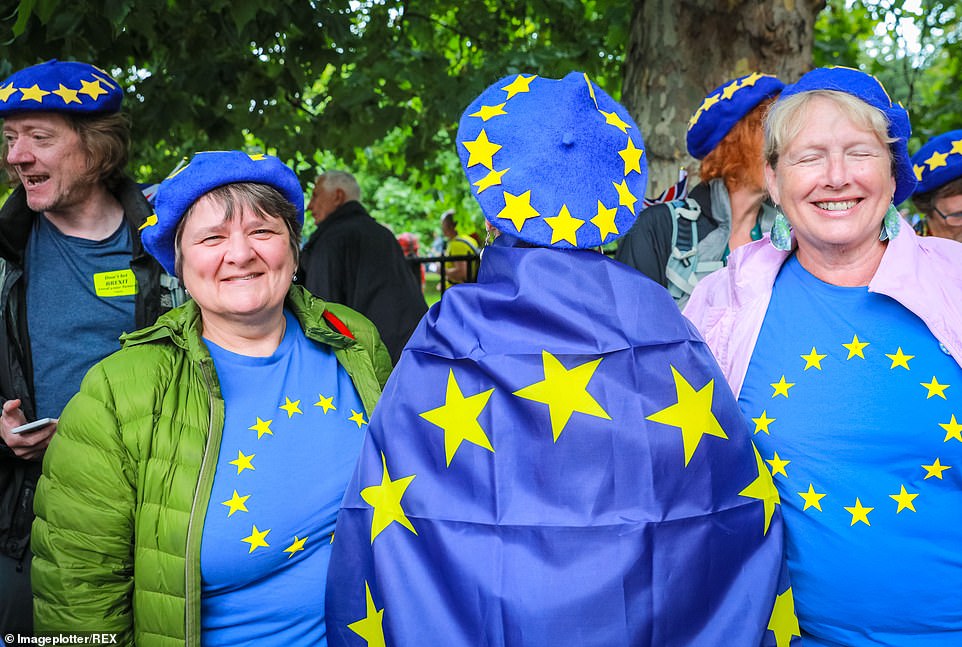 A group of ladies arrange their EU-flag berets and outfits. Protesters at the anti-Brexit ‘March for Change’, make their voices heard with placards, EU flags, outfits banners and chants 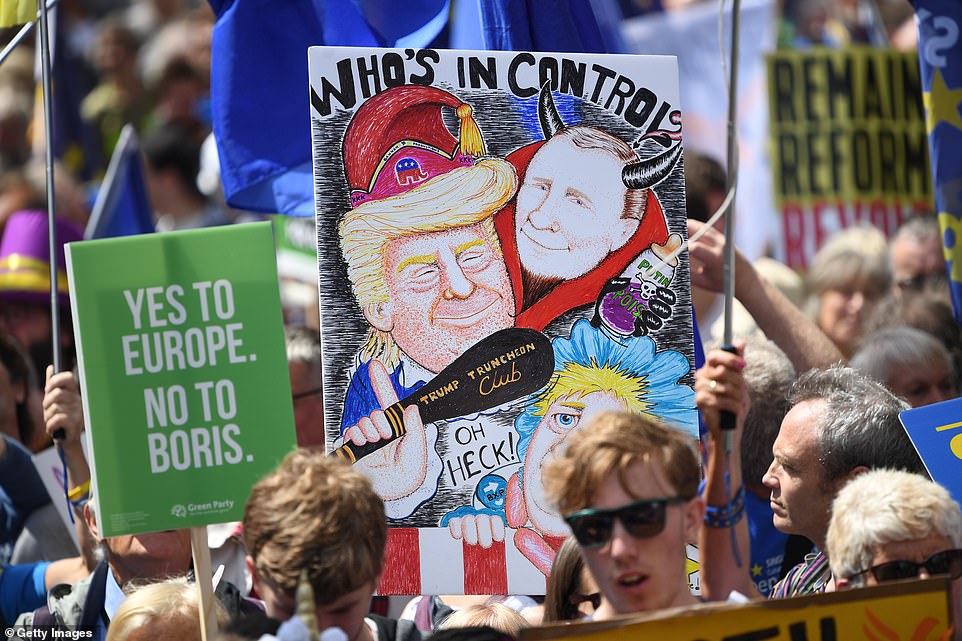 Several other politicians were targeted by placards during the protest, including Donald Trump and Russia’s Vladimir Putin 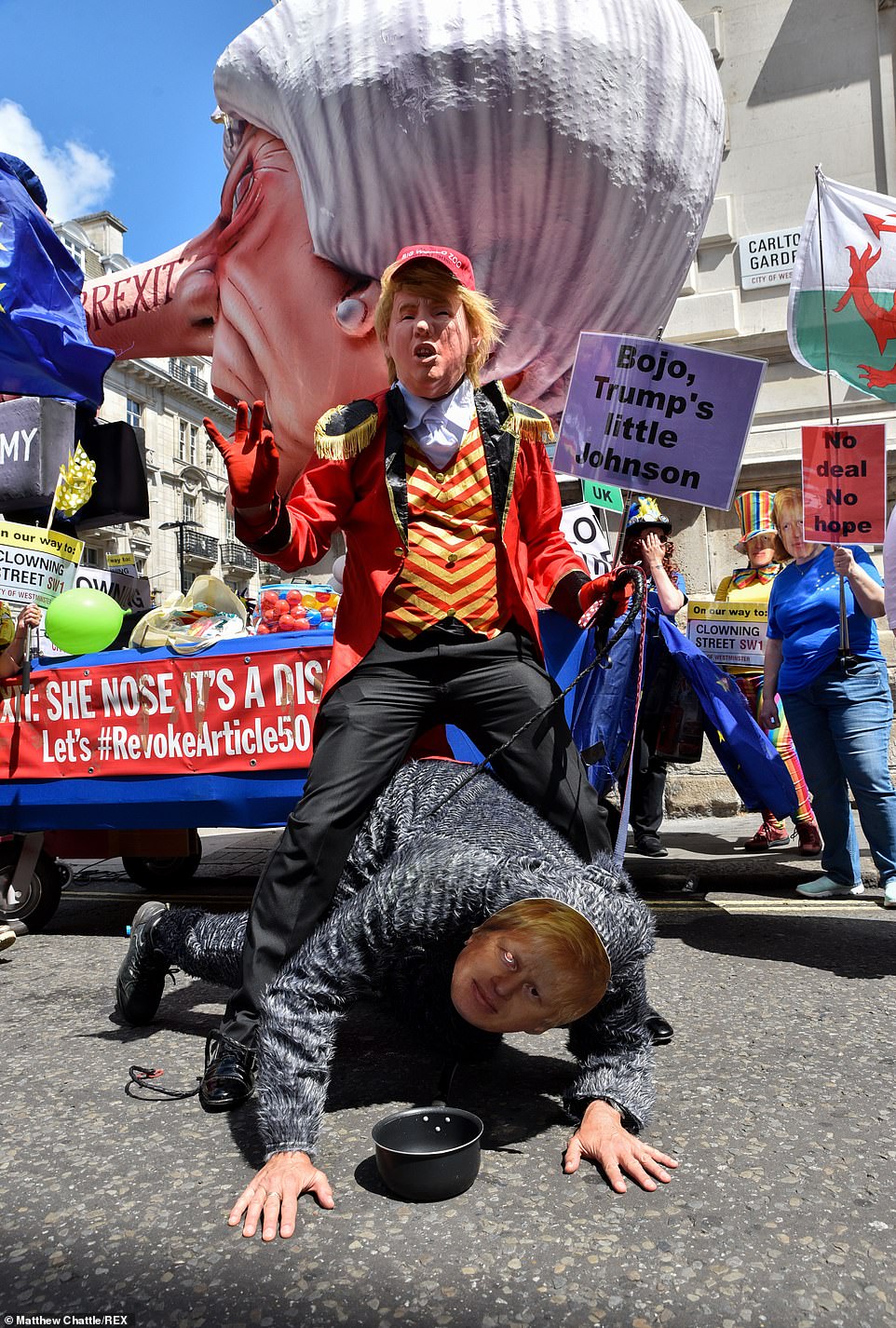 The protesters dressed in a range of mocking outfits to target Boris Johnson, with these two suggesting he is a puppet of US President Donald Trump 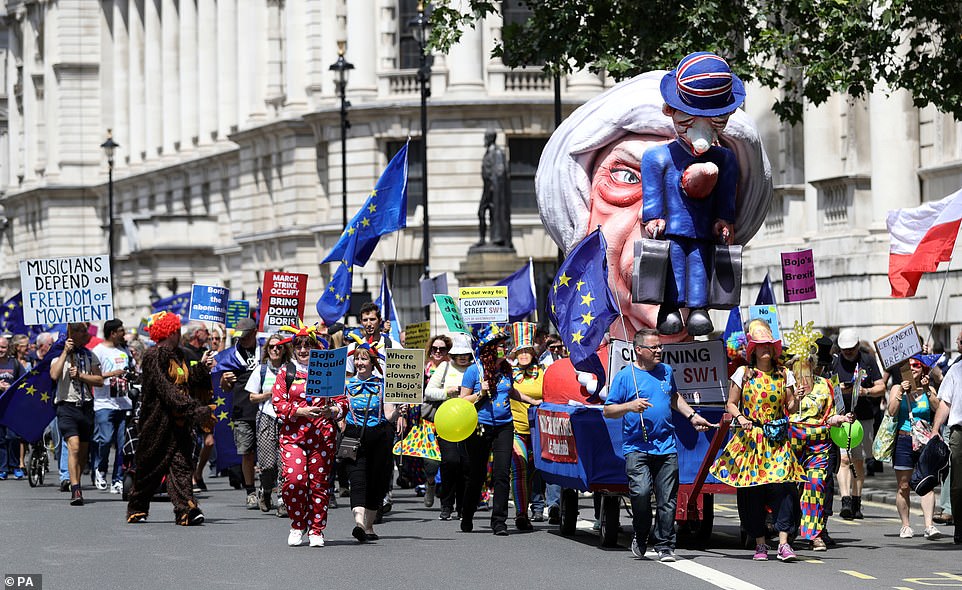 Pro-European Union supporters make their way down Whitehall, past the Cabinet Office in central London, during the March for Change today 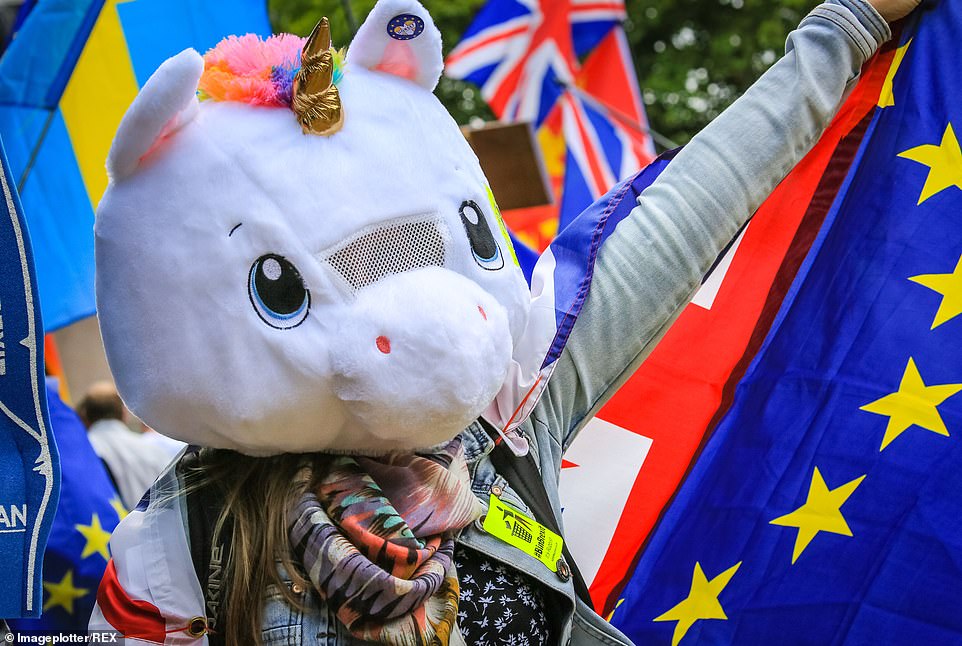 ‘Anti-Brexit Unicorn’ at the march. Protesters at the anti-Brexit ‘March for Change’, make their voices heard with placards, EU flags, outfits banners and chants 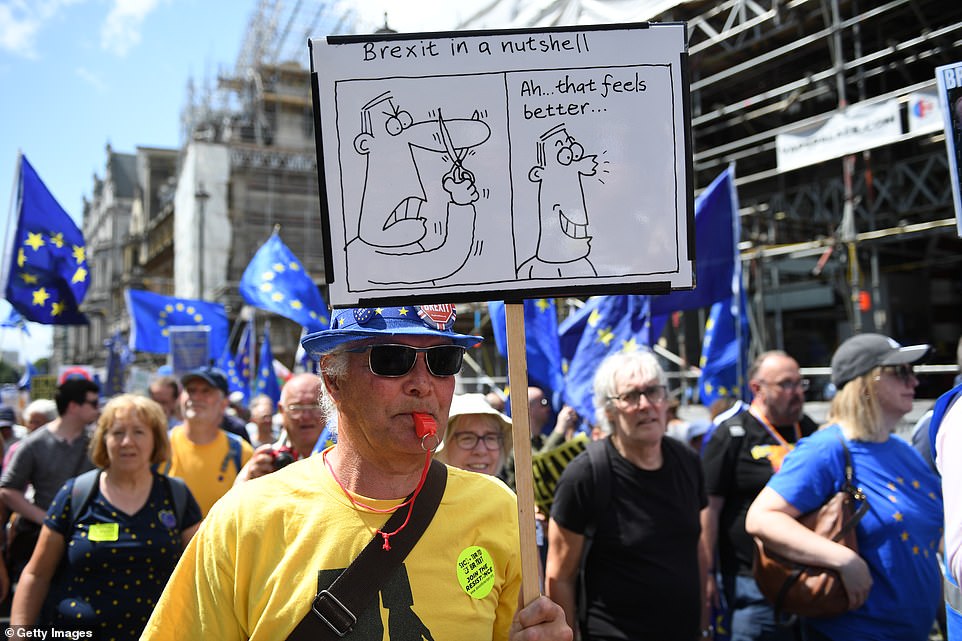 The 76-year-old said: ‘I hate what has been happening to this country over the last nine years.

‘I think ordinary people have been targeted and after Brexit the poor will become poorer. I want my kind, accepting country back.’

A number of pro-EU speakers are set to address protesters in Parliament Square on Saturday afternoon.

Singer-songwriter Billy Bragg tweeted that he would be ‘singing a few songs’ while appearing at the protest.

Presenter Sandi Toksvig and Gavin Esler have also signed up, along with Caroline Criado-Perez and Ayesha Hazarika.

Other supporters include the Lib Dems and the Green Party along with Best for Britain and Women for a People’s Vote.

Campaigners said: ‘This is a national emergency. We won’t put up with a hard Brexit PM being imposed on the country and hurtling us towards the cliff edge.

‘We can only solve the big global challenges – from climate change to terrorism – by working with Europe and the rest of the World.

‘We can build that better tomorrow through the most successful peace project in history.