The death toll of the White Island volcano disaster is expected to rise today as authorities attempt to salvage and identify eight bodies resting on the smouldering rock.

Australian Prime Minister Scott Morrison confirmed on Tuesday three Australians had been killed, eight more were missing – feared dead – and 13 were fighting for life in hospital with horrific burns.

The number of people listed as missing is far higher on the New Zealand Red Cross website, which says there are still 20 Australians who haven’t been seen since the last.

The disparities in figures are commonplace in natural disasters as authorities scramble to identify the victims and desperate families struggle to reach loved ones near ground zero.

What is certain is that six people are dead as of 4am on Wednesday – and the bodies of eight others remain on White Island.

Only one of those killed has been officially identified – New Zealand tour guide Hayden Marshall-Inman – whose family confirmed his death on social media late Monday.

Fears have grown for North Sydney family, the Langfords including father Anthony, 51, who works at Sydney Water, wife Kristine, and their two children Jesse, 19, and Winona, 17.

Missing: Fears have grown for North Sydney family of four, parents Anthony, 51, and Kristine Langford (pictured) and their two teenage children Winona Langford, 17, and Jesse Langford, 19. Relatives confirmed they still have not heard from the family 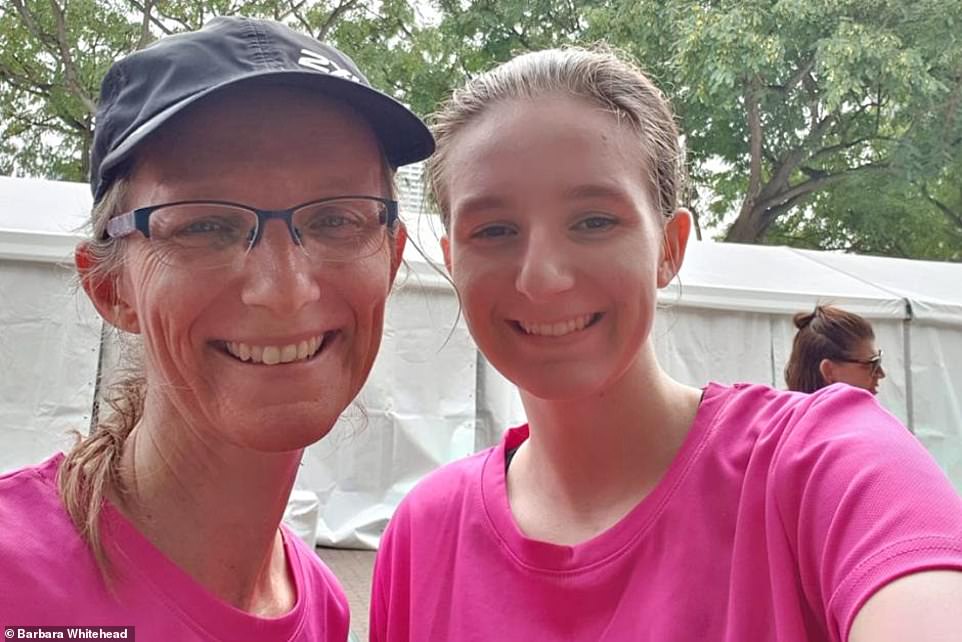 Julie Richards, 47, and her daughter Jessica, 20, (pictured) from Brisbane, were on the cruise and are among the missing. Ms Richards’ sister Barbara Whitehead told the ABC she has heard nothing and is ‘overwhelmed’ 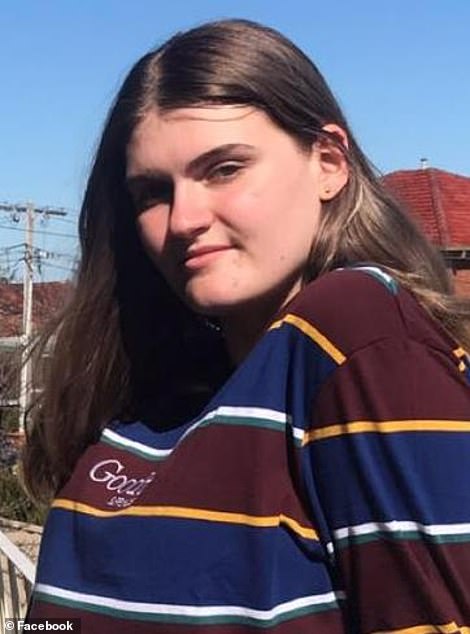 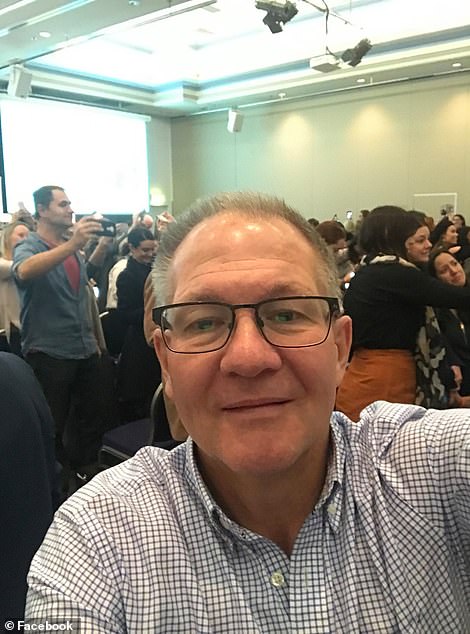 Lisa Dallow and her husband Gavin (right) 53, and 15-year-old daughter Zoe, from Adelaide, (left) were on a walking tour of the active volcano when it erupted. The mum is in critical condition while Gavin and Zoe remain unaccounted for as of Tuesday night. 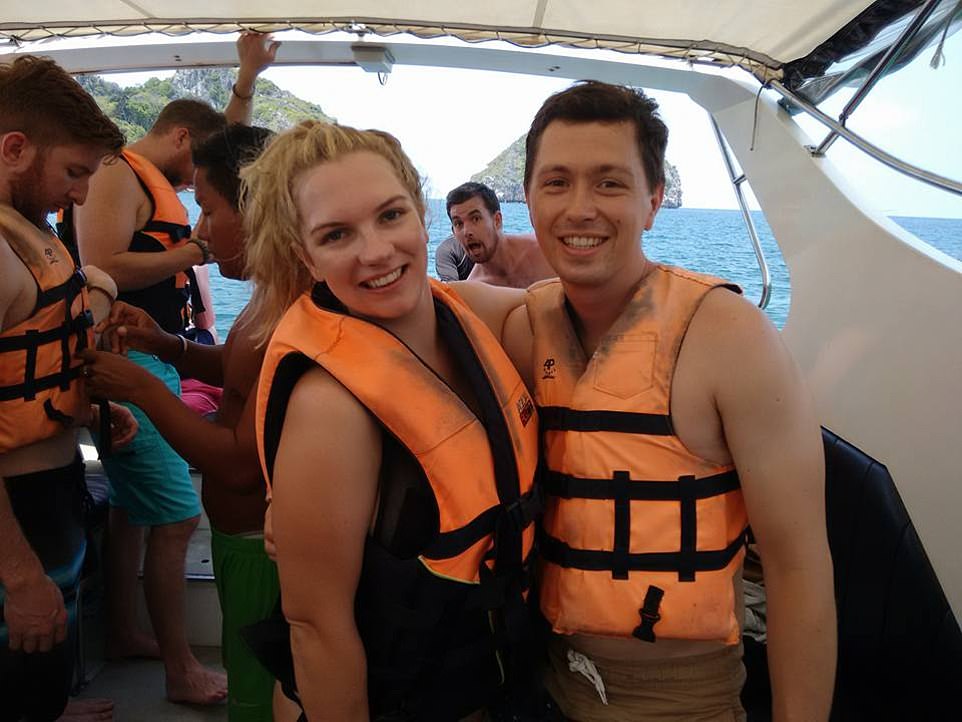 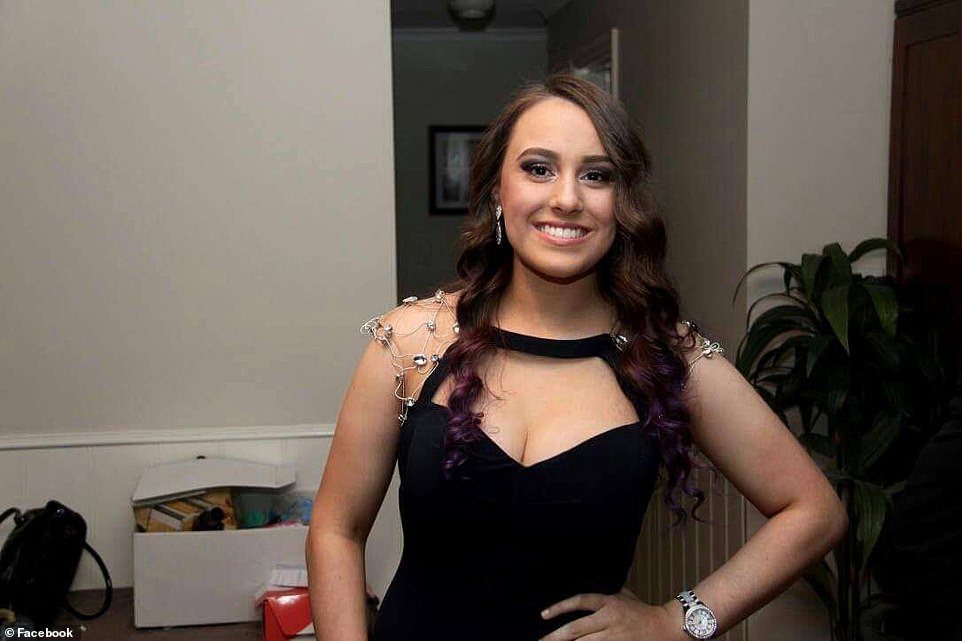 Melbourne woman Krystal Browitt, 21, who was onboard the cruise is also still missing, according to her boyfriend

Relatives said they are yet to hear from the family and are concerned about their welfare.

‘We know that they went on a cruise on the island and there’s an explosion and they’re missing,’ Mr Langford’s brother Rodney told The Daily Telegraph.

‘I’m hoping somebody knows anything, has seen my brother, knows my brother.’

Jesse was a student at Marist College North Shore, which released a statement confirming he was among the missing.

He had been a student at the school since Year 7 and graduated last year, Principal Tony Duncan told students and parents.

Brisbane mother and daughter, Julie Richards, 47, and Jessica, 20, are also among the Australian tourists on the cruise who are still missing as of Tuesday night.

Ms Richards’ sister Barbara Whitehead said she was ‘overwhelmed’ by the lack of information, and had heard nothing from NZ police, Royal Caribbean, or DFAT.

She called seven New Zealand hospitals in the hope they were injured and not dead, but only one of them would even confirm they were not patients.

Jessica is a veterinary technology student at the University of Queensland’s Gatton campus and she and her mother were due back this weekend. 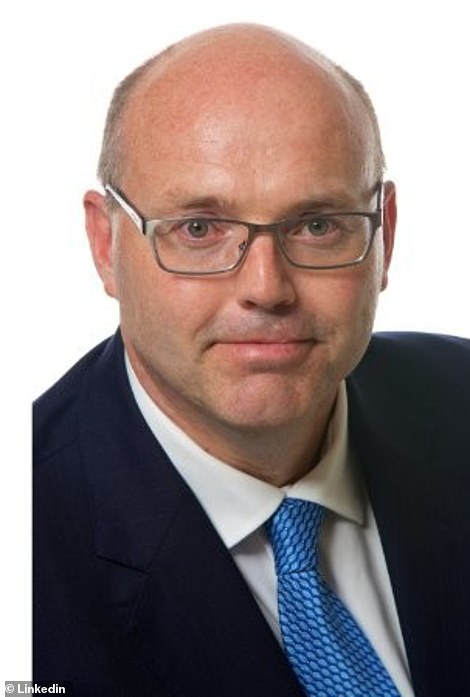 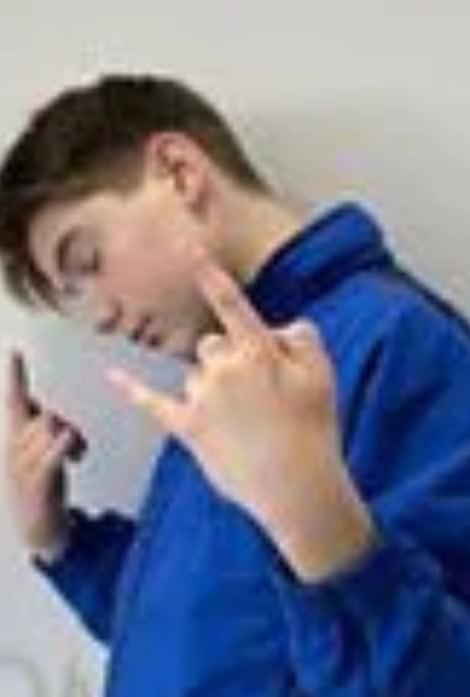 Grave fears are held for Sydney couple Martin and Barbara Hollander are their two children.

On Tuesday, officials from Knox Grammar School in Wahroonga, confirmed the parents and their two student children, Matthew (Year 8) and Berend (Year 10) have still not been found.

‘It is with a heavy heart that I can confirm that a Knox family is currently unaccounted for … in the eruption,’ headmaster Scott James wrote in a statement.

The 13 Australians who were injured have been taken to multiple hospitals around the town of Whakatane on New Zealand’s North Island.

Mum and engineer Lisa Dallow, 48, from Adelaide, had also been feared dead but was revealed to be in hospital fighting for her life after suffering severe burns, her brother confirmed on Tuesday.

Ms Dallow and her husband Gavin, 53, and 15-year-old daughter Zoe had been on a cruise holiday which included an optional walking tour of the active volcano when it erupted.

Gavin and Zoe remain unaccounted for as of Tuesday night. Some 47 tourists – from New Zealand and overseas – were on or around the crater, located off the coast of the North Island, at the time of the blast. Pictured: Smoke rises into the air after the explosion on Monday 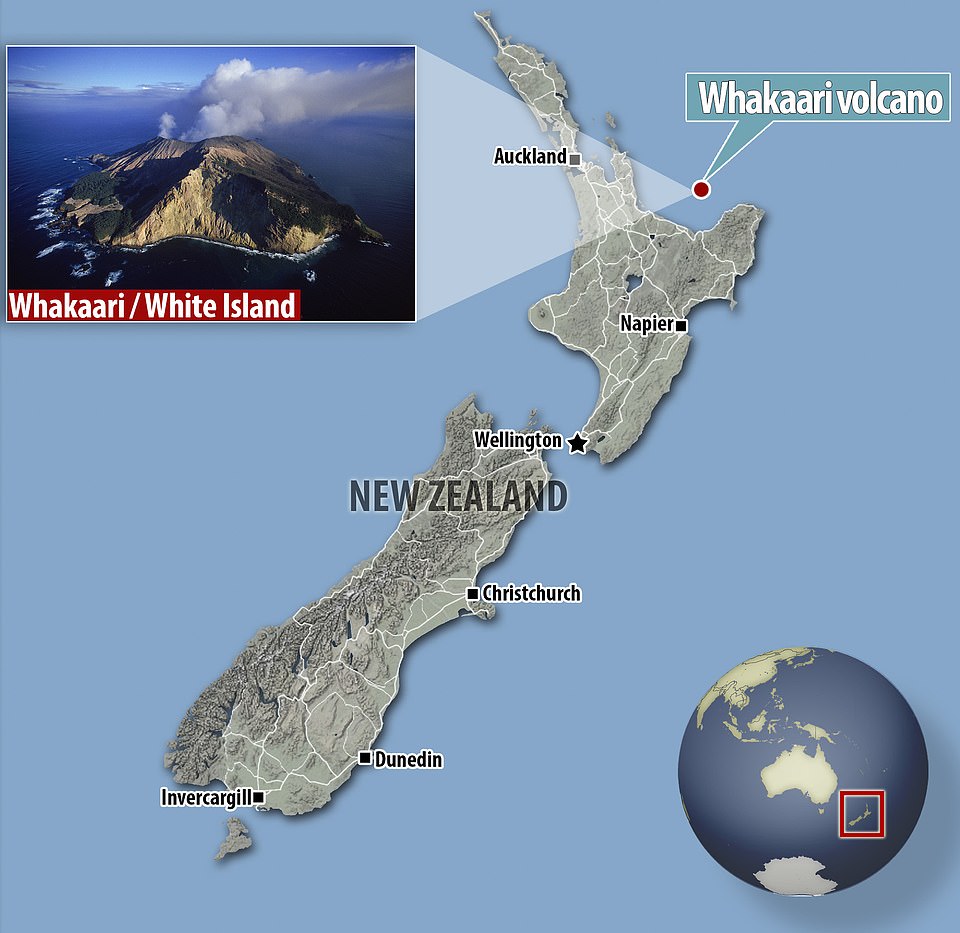 New Zealand’s deadly volcano eruption was ‘a disaster waiting to happen’, with an expert saying the tourists who walked into the crater were trapped.

While Monash University Emeritus Professor Ray Cas said there was nothing wrong with the warnings given about White Island, he was sharply critical of the access for tourists.

‘White Island has been a disaster waiting to happen for many years,’ he said in a statement from Scimex.

He also spoke of the dangers for anyone in the crater when the volcano erupted.

‘The people were actually inside the crater, right adjacent to the vents of the volcano – that’s the issue,’ he told the ABC on Tuesday.

‘They are in this very confined space and when the event occurs there is actually nowhere to go.

‘There would have been huge blocks of rock flying at ballistic speeds, a lot of ash and gas released making visibility zero, so people would not have known where to go.’

The professor said hot rock debris and crater waters would have severely burned the people caught in the eruption.

NZ experts said on Tuesday the volcano was on the second-highest alert level before the eruption, given monitoring indicators had increased.

‘The scientists got it right and it was just really unfortunate timing,’ Professor Cas said.

‘You have a confluence of many volcanic acids within this very confined space making it very difficult to go anywhere if an event does occur.’

A ‘highly volatile environment’ remains for the next 24 hours with a 50-50 chance of another eruption, GNS Science volcanologist Graham Leonard said.

‘We estimate a larger eruption is unlikely. However this is a highly volatile environment and any predictions have to be seen in that context.’

The institute had put out volcanic alert bulletins indicating the volcano was more active and there was an increased likelihood of eruption.

Authorities have collected carbon dioxide and sulphur dioxide samples from the site to work out what.

A 21-year-old Melbourne woman Krystal Browitt, who was onboard the cruise is also still missing, according to her boyfriend.

The man confirmed she had been on the tour of the volcano but he has not heard from her since, 9News reported.

Jason Griffiths, 33, from Coffs Harbour in on the NSW Mid-North Coast is also in hospital in critical condition after the eruption. Mr Griffiths was travelling with Karla Mathews, 32, and Richard Elzer, 32, who are still missing.

Nick and Marion London, from Engadine in Sydney’s south, were also being treated for burns in hospital.

Police said the sixth victim was being treated in hospital before dying of their injuries late Tuesday. Five people had earlier been confirmed killed in the disaster, which struck White Island at 2.11pm on Monday. 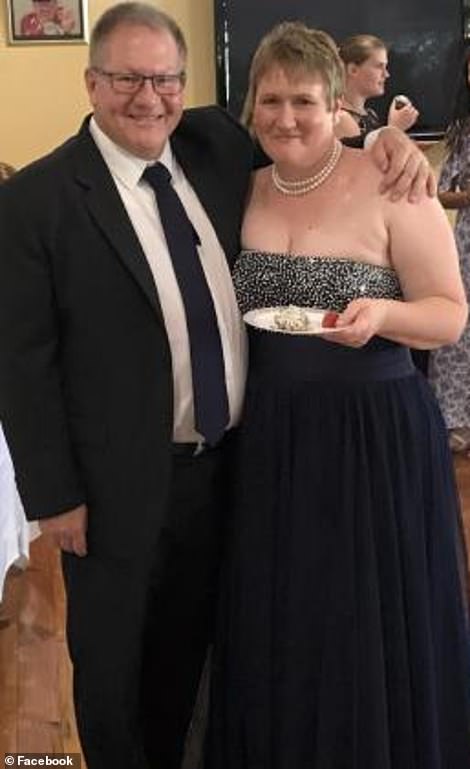 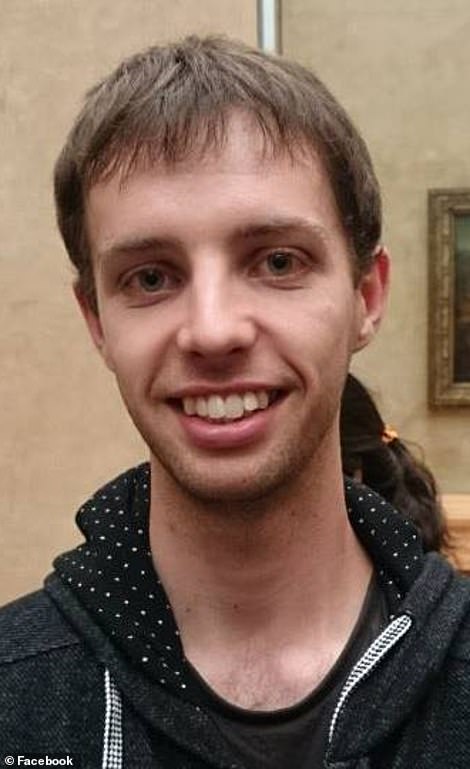 Injured: Adelaide mum Lisa Dallow (pictured left with husband Gavin, 53) had been feared dead but has been revealed to be in hospital fighting for her life after suffering severe burns, her brother confirmed. He husband is still unaccounted for. Jason Griffiths (right), 33, from Coffs Harbour in New South Wales is in hospital in critical condition after the eruption

Here is a list of Australians marked as missing on the Red Cross list as at 9.30am AEDT. Some may still be in hospital, some may be unaccounted for and some may be safe but not yet able to contact the Red Cross to notify of their status.

Kristine Langford, age not given, Australia

Gary Woolley, age not given, Sydney 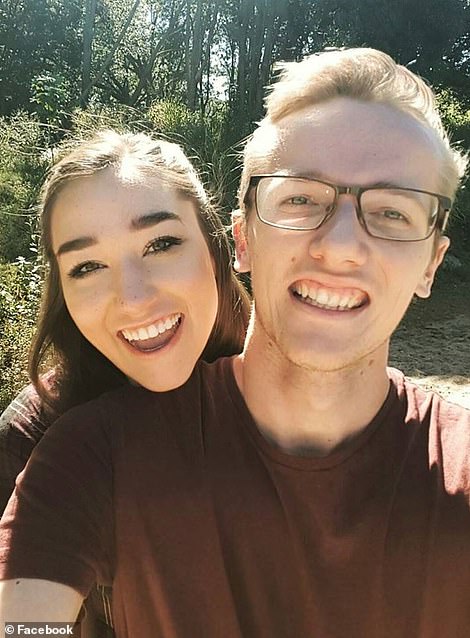 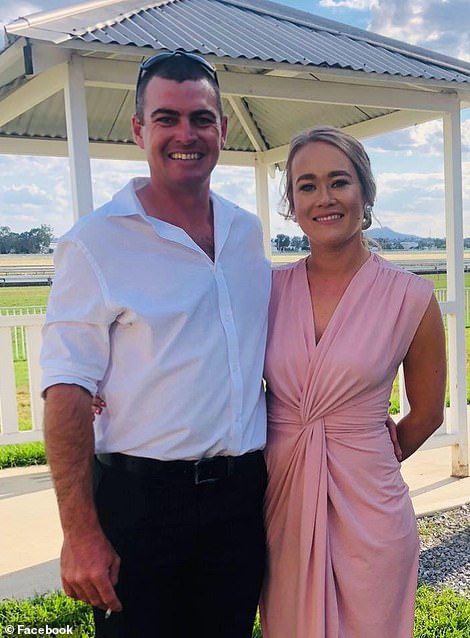 Found: Newlywed couple James, 23, and Madeleine Whitehouse, 24, (left) from Brisbane, were also listed as missing as of early Tuesday morning but family later declared them safe. Couple Amy Miall, 30, from Brisbane, Mathew Thomas, 31, from Tamsworth (right) have been accounted for

Australian Prime Minister Scott Morrison has said ‘up to three’ of the dead are Australians, while Malaysia has confirmed one of its citizens is among the dead. None of them have been identified.

The victims range in age from 13 to 72. Two are from the United Kingdom, four from Germany, 24 from Australia, five from New Zealand, two from China, one from Malaysia and nine from the United States.

Of those on the island, 38 were passengers from the Ovation of the Seas cruise ship which made its way to New Zealand from Sydney, and were travelling on a boat operated by White Island Tours.

Thirty people are still being treated in hospital – some with 90 per cent burns – and three have been treated and released. Pete Watson, New Zealand’s chief medic, said it likely that ‘not all’ of the wounded will survive.

Investigators say all eight missing are likely to be dead, but recovering their bodies could take some time amid fears of another eruption and toxic gasses shrouding the island.

Police have announced a probe ‘into the circumstances of the deaths and injuries’ on behalf of the coroner, but backtracked on an earlier announcement of a criminal investigation.

On Wednesday, passengers made their way around Tauranga, about an hour away from Whakatane, as the 4,918-capacity vessel sat docked in the city’s harbour.

There were emotional reunions between tourists who had become friends during the trip but were yet to see each other after Monday’s explosion.

Australian tourists Avis and Ray Steer, both aged in their 70s, recalled the dramatic moment the cruise ship’s captain notified the passengers of the disaster. 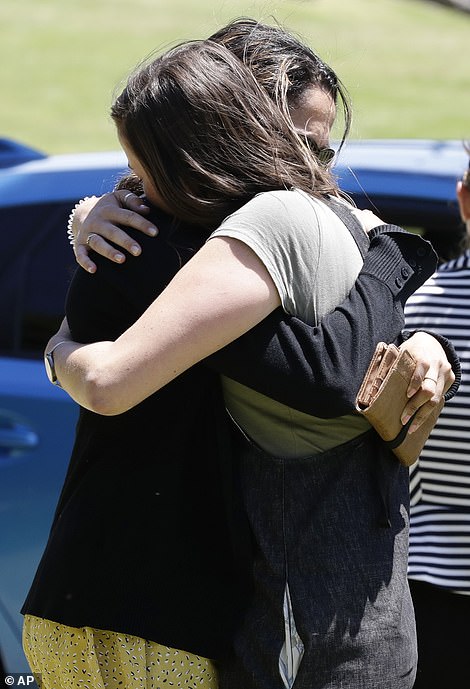 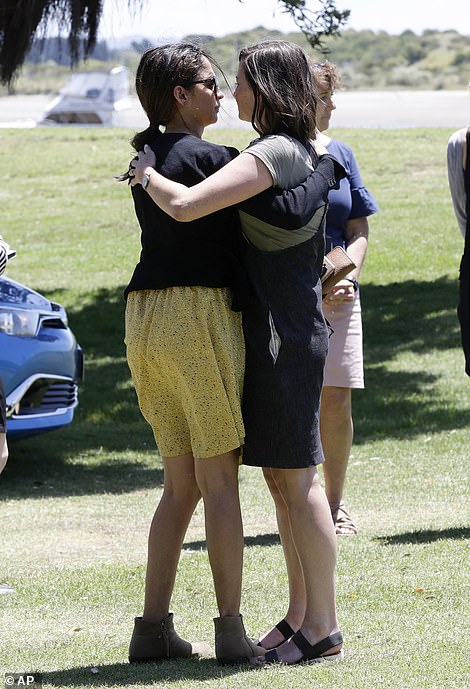 Earlier in Whakatane, emotional residents gathered by the wharf where the doomed tour boat took off from 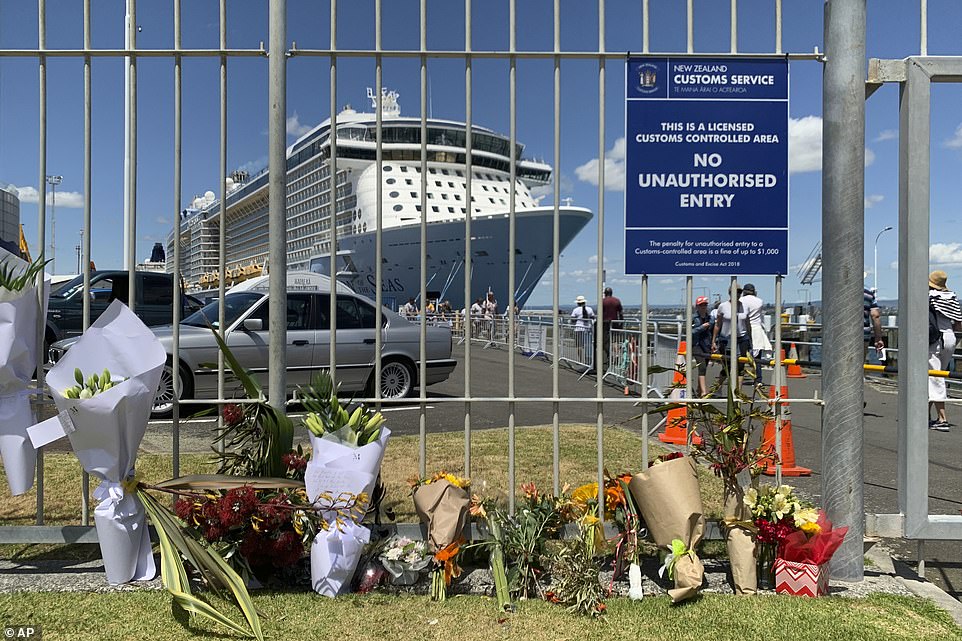 ‘When he came back to the ship and told us all what had happened, you could’ve heard a pin drop,’ Ms Steer told Daily Mail Australia

‘We didn’t know anything until we got back to the boat… It’s a very sombre mood.

‘It’s terrible… On a holiday like this to have those lives snubbed out. We feel terrible for the captain. It’s awful for the folk of New Zealand.’

Ms Steer commended the ship’s captain for his handling of the crisis, adding that he had asked passengers to refrain from commenting on those who had died until their family were given the chance to grieve.

‘He’s asked us to have the people in our thoughts and prayers. I’d say he’s doing an excellent job,’ she said.

The Adelaide couple said they had not heard any warnings about travelling to White Island before the eruption but that they were not interested in going as they had planned their travel itinerary ahead of time.

News of the victims began emerging as police announced a probe ‘into the circumstances of the deaths and injuries’ on behalf of the coroner, but backtracked on an earlier announcement of a criminal investigation.

Experts had earlier warned that tours of White Island, which is the tip of New Zealand’s most active cone volcano, was a ‘disaster waiting to happen’. A health and safety investigation has also been launched.