Tourists are still being invited to visit Bali despite three hundred tremors being recorded around the site of Mount Agung on the resort island.

Indonesia’s National Disaster Management Agency has said the island remains safe for tourists, many of whom are Australians going on school holidays.

Between midnight and 6am on Sunday, three hundred tremors were felt and white smoke was seen 200 metres above the crater.

Sutopo Purwo Nugroho, National Disaster Management Agency spokesman,​ tweeted that as of Sunday morning the volcano had not erupted and there was no volcanic ash. 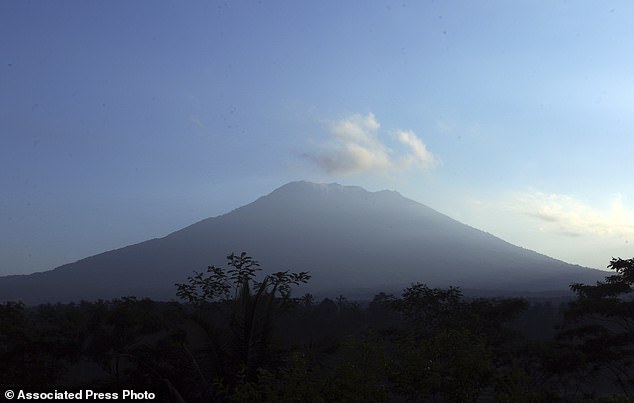 Between midnight and 6am on Sunday, three hundred tremors were felt and white smoke was seen 200 metres above the crater

Located on the east of Indonesia’s main island, the volcano – which last erupted back in 1964 – has experienced a major increase in the rate of tremors over recent days.

Fearing an eruption is imminent, the nation’s authority raised the alert level up to the highest rating, leaving the holiday hotspot bracing for travel chaos should it explode.

Between 50,000 to 60,000 travellers are still flying in and out of the island every day, Ngurah Rai airport general manager Yanus Suprayogi told The Sydney Morning Herald. 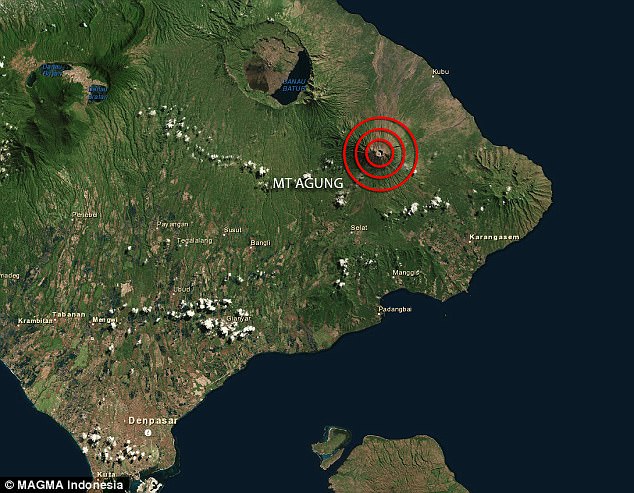 Director general of air transport, Agus Santoso, told the publicaiton flights in and out of the island will only be affected if volcanic ash is detected,  even if the volcano erupted with lava.

If volcanic ash was detected, nine alternative airports outside of Bali have been prepared for diverted flights.

If flights do become affected, Mr Santoso said 300 buses would be available to transport affected travellers to ferry ports and bus stations so they could leave Bali.

‘Bali tourism is safe. Do not spread misleading news that Bali is not safe because Mount Agung is on the highest alert status. Please come and visit Bali,’ Mr Sutopo tweeted. 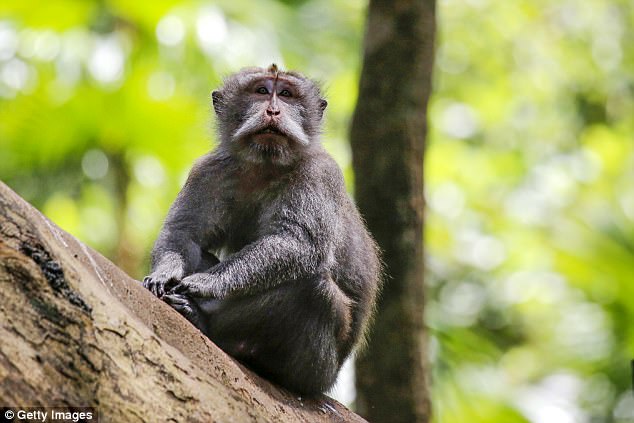 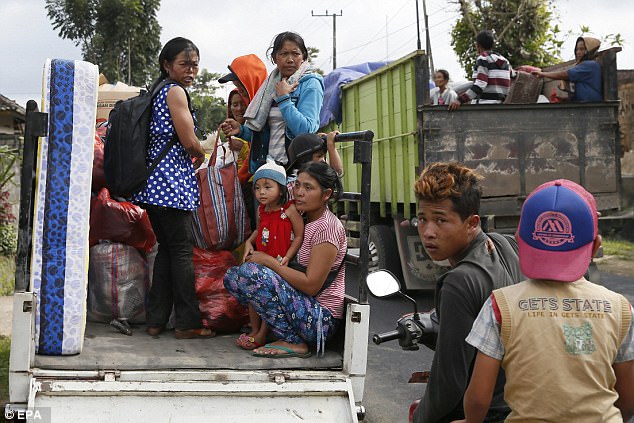 A photo circulating on social media, showing a mountain with lava streaming down, was of Soputan, a volcano in Sulawesi that erupted in 2015.

Mr Santoso said ‘this is causing people to panic’.

The official figure of evacuees for in the area has risen to 34,834, after two fires broke out this week and smoke was seen rising from the summit.

The number is likely to be larger with many villagers staying with family and friends.

The Department of Foreign Affairs and Trade (DFAT) has updated a travel warning for Australians heading to Bali, telling them to make contingency plans for an eruption. 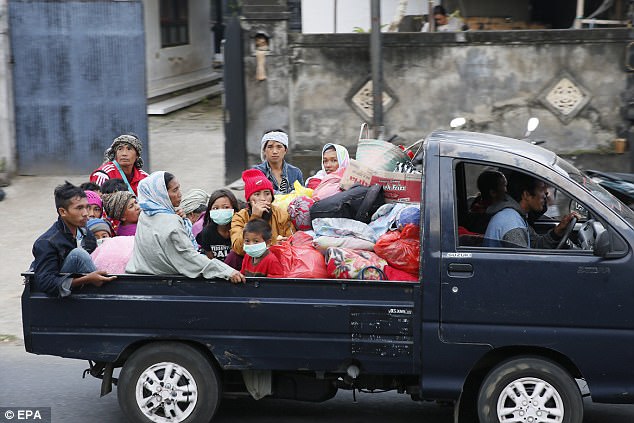 Over 30,000 villagers in the area around Mt Agung have left their homes after two fires broke out this week and smoke was seen rising from the summit

Australians travelling to the tourist mecca over the school holidays are being urged to keep away from the crater and be aware of local media reports.

‘Contact your airline or tour operator to confirm travel plans,’ said DFAT, with flights likely to be cancelled if the volcano erupts.

Travellers were reporting cancelled flights to Denpasar over the weekend as airlines reacted to the latest warning.

One Twitter user posted from Ubud, in the uplands of Bali, saying locals are ‘spooked’. 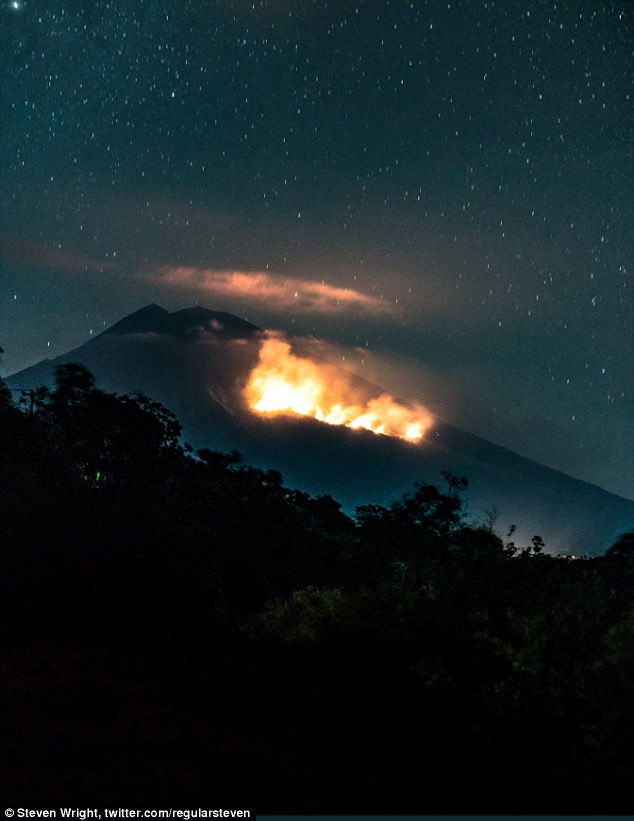 Photographer Steven Wright took two photos eight hours apart of fires which had broken out on the side of the volcano.

But while tourists continue to arrive to the Indonesian capital, thousands of animals in the area have fled down the mountain and into nearby villages – one of the top signs a volcano is set to erupt. The official figure of evacuees for in the area has risen to 34,834, with many more unaccounted for likely to be staying with family

Snakes and monkeys have reportedly begun fleeing the area around Mount Agung in their droves.

Sogra Village elder and Balinese priest Wayan Sukra told local media Bali Tribun that the animals had been on the move for three days.

‘Maybe because it’s hot on Mt. Agung. So the animals are exiting and coming to settled areas,’ he said.

‘Maybe this is a sign that the mountain will erupt (because) this condition is not usual.’ 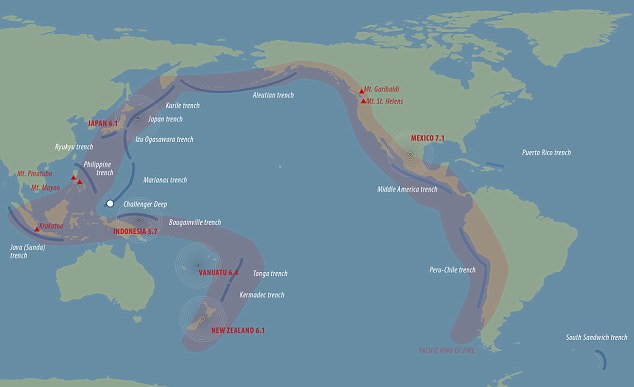 The ‘Ring of Fire’ is where tectonic plates collide and move, causing almost 90 per cent of the world’s earthquakes

Among the other signs locals claim prove an eruption is imminent are ash rain which causes irritation on the skin.

The mountain, to the northeast of the tourist hotspot of Kuta, is among more than 120 active volcanoes in Indonesia.

The country of thousands of islands is prone to seismic upheaval due to its location on the Pacific ‘Ring of Fire,’ an arc of volcanoes and fault lines encircling the Pacific Basin.

More than 7,000 of the evacuees were in the 840 square kilometre Karangasem district, which is home to about 408,000 people. 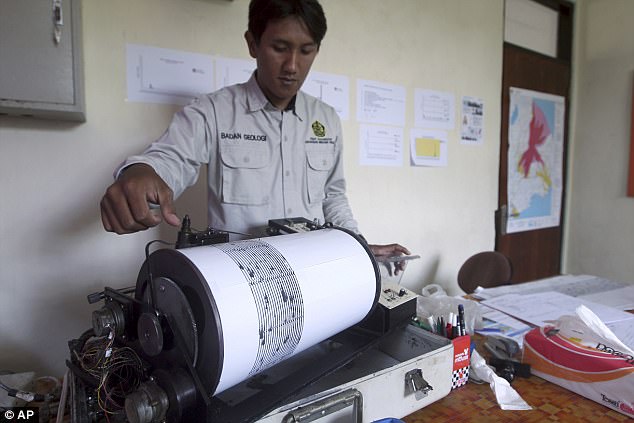 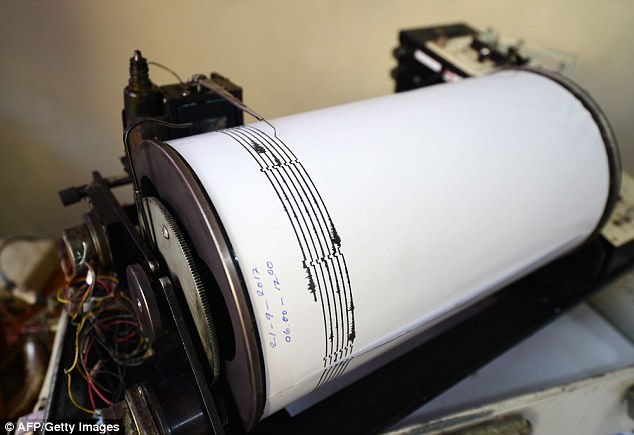 The country of thousands of islands is prone to seismic upheaval due to its location on the Pacific ‘Ring of Fire,’ an arc of volcanoes and fault lines encircling the Pacific Basin