A shaken witness has described a terrifying crash which killed three men at a city roundabout last night.

Thomas Howlett, 32, was waiting at traffic lights by the Eye Roundabout on the A1139 in Peterborough, Cambridgeshire at about 11pm last night when disaster struck.

He had been travelling home from his friend’s house after watching the Love Island final when he saw the deathly crash.

Three men have died in a crash at a roundabout in Peterborough, Cambridgeshire (pictured)

Missing the incident by just inches, Mr Howlett heard a screech of tyres and a loud bang.

He said that by the time he’d reached the scene of the crash all three men were already unconscious.

In an interview with Peterborough Today, he said: ‘I was sick, and I was shaking. It was such a shock. 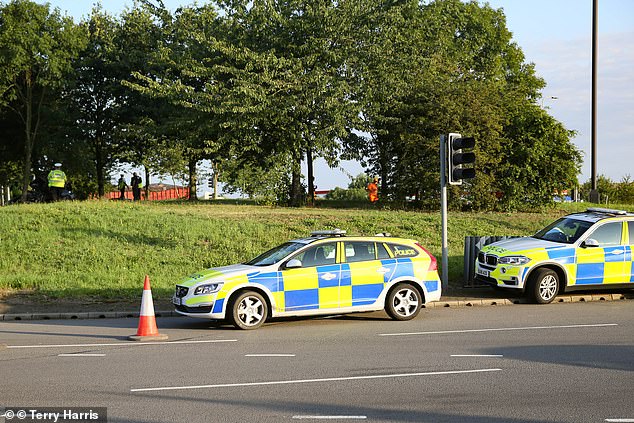 Police are now appealing for dashcam footage of the accident, which happened at the Eye Roundabout

All three men were given CPR at the scene but pronounced dead by paramedics shortly after.

Police are now appealing for dashcam footage of the accident, which happened at the Eye Roundabout.

A Cambridgeshire Police spokesman said: ‘We were called at about 11pm yesterday (29 July) to a serious collision on the Frank Perkins Parkway in Peterborough.

‘A car had left the road and come to rest on Eye roundabout. The three occupants of the car died at the scene.

‘Road closures have been in place overnight, but these are due to be lifted shortly. There is heavy congestion and we are advising drivers to avoid the area.

‘Police are also appealing for witnesses and anyone with dash cam footage to get in touch by calling 101 and quoting Op Blackmore.’