A teenage thug who pulled out a huge zombie knife to smash a car’s window while the driver was inside has been found guilty of attempting to cause GBH.

Joshua Gardner was 17 when he was caught battering the vehicle with his weapon on the driver’s side before smashing the passenger window in Croydon.

Shocking footage taken in the busy South London street shows him carrying out the brazen attack in at 5pm on May 30.

The thug from Thornton Heath, now 18, was found guilty of attempting to cause grievous bodily harm (GBH) with intent on Wednesday at the Old Bailey.

He had previously pleaded guilty to affray and being in possession of an offensive weapon.

Gardner is seen cycling along the road and stopping next to a blue Volkswagen, which is stationary in the video.

The 19-year-old driver of the car pulls out from a queue of traffic and appears to almost hit Gardner, forcing him to jump out of the way.

The Volkswagen then hits an oncoming vehicle. Gardner drops his bike to the floor and runs after the car, pulling out the huge zombie knife as he does.

He chases after the car and kicked one of the rear passenger doors and then swings the knife six times against the driver’s front window.

Gardner then attempts to get into the locked vehicle via one of the passenger doors, but is left running to the other side of the car and goes out of view of the camera. 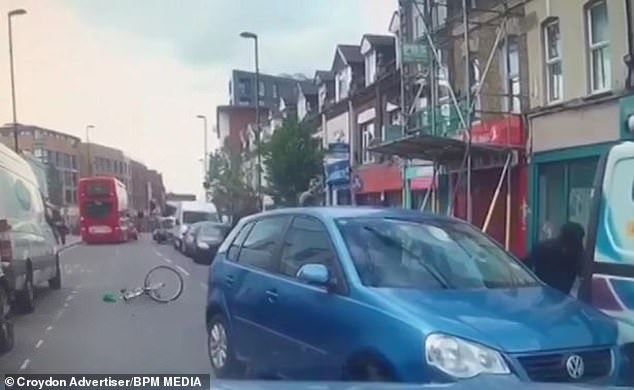 The thug tried to get in the car using the passenger side door in the attack in May this year, but found it was locked as he brandished the huge weapon in South London

The driver desperately tries to drive away, with the windscreen wipers moving up and down, and Gardner then appears in view of the camera again as he kicks the front passenger door at least twice.

Another two males are seen running towards the car as Gardner smashes the front passenger window with the knife.

At this point the driver gets out of the car and runs off. Luckily the driver was not injured and returned to his vehicle after Gardner made off.

In response to the incident, Croydon North MP Steve Reed wrote to the Home Secretary, Sajid Javid, to call for more to be done to tackle the ‘rapid escalation’ in knife crime. 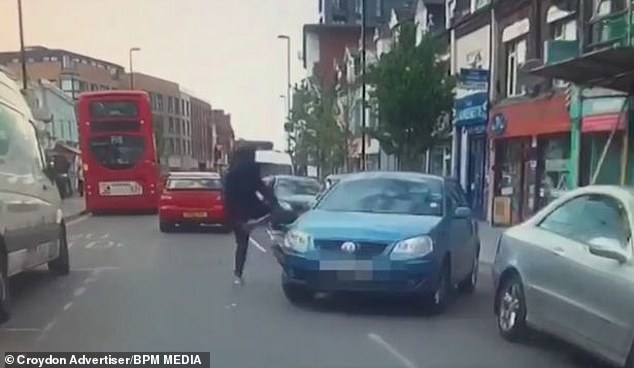 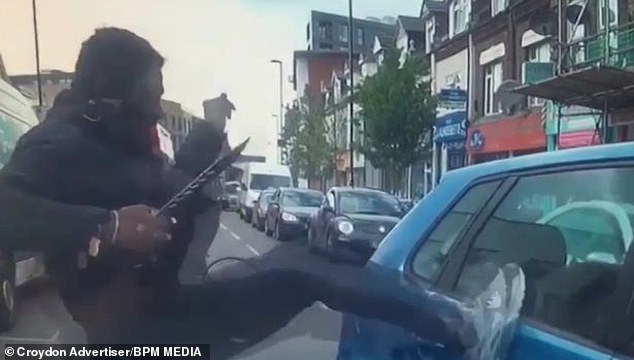 In the letter, which he posted on Twitter, Mr Reed said: ‘[On May 30] a cyclist in Croydon North pulled out a large knife and attempted to smash a car window to get at the driver.

‘This is the latest in a long series of knife attacks across London, many of which have proved fatal.

‘Footage of this terrifying incident has been widely circulated and many of my constituents are concerned that our police and public services lack the resources needed to prevent this kind of incident.’

Gardner will be sentenced at the Old Bailey on Monday.