A letter from Titanic’s shipping company apologising for losing a wine delivery because the liner sank has been uncovered after lying uncovered in wine merchants’ desk drawer for decades.

Titanic foundered after smashing into an iceberg on its way to New York on April 15, 1912 and 1,503 people were killed in the disaster.

The letter from White Star Line, dated April 16, 1912, apologises to Berry Bros and Rudd for losing 69 cases of its wine and spirits which were being transported on the ship.

The letter reads: ‘Dear Sirs, referring to your shipment by this steamer, it is with great regret we have to inform you that the ‘Titanic’ foundered at 2.20am 15th instant, after colliding with an iceberg, and is a total loss.

Will Wrightson, wine expert and team leader at Berry Bros and Rudd, with a framed copy of the letter from White Star Line 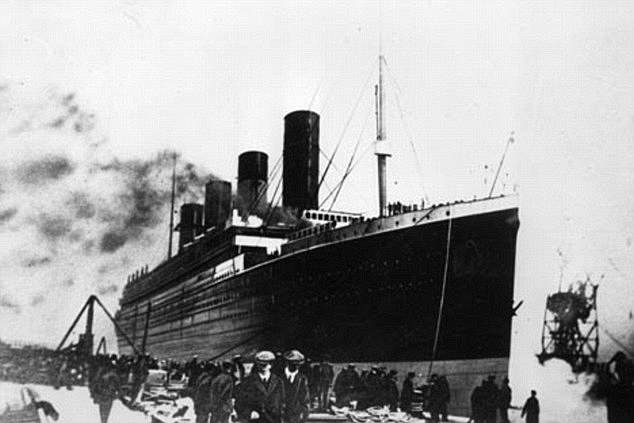 Titanic foundered after smashing into an iceberg on its way to New York on April 15, 1912 and 1,503 people were killed in the disaster 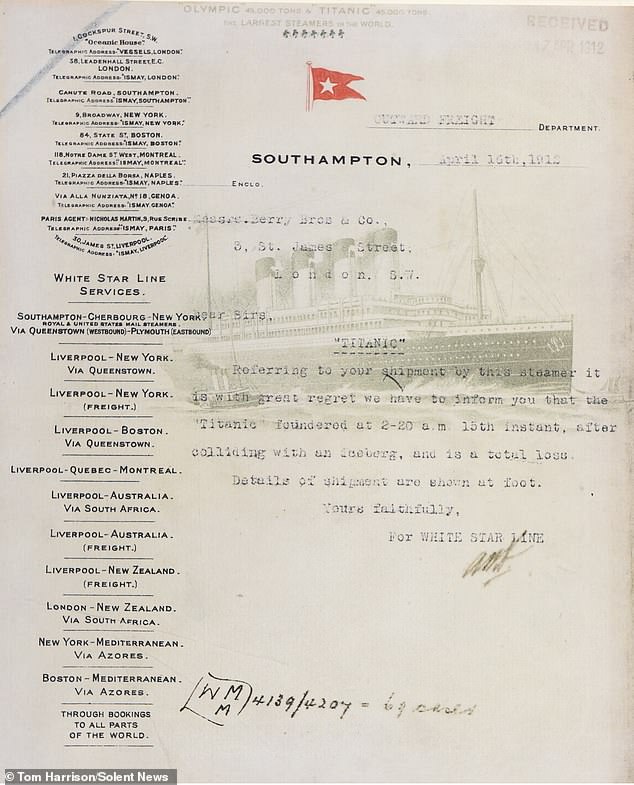 Following the discovery, the company decided to share a photograph of the original, which is now kept securely in a safe

‘Details of shipment are shown at foot. Yours faithfully, for White Star Line.’

There is no mention of the people who died in what is regarded as one of the greatest disasters at sea.

The letter was found at the bottom of a drawer in the wine company’s London office.

Following the discovery, the company decided to share a photograph of the original, which is now kept securely in a safe.

A framed copy of the historical letter also now hangs on the wall at Berry Bros and Rudd, No.3 St James’s Street, London.

Geordie Willis, creative director for Berry Bros & Rudd said: ’69 cases of wine were on board the Titanic when it sank. They would have contained a few still wines, mostly spirits, fortified wine and champagne.

‘The letter was rediscovered and at that point the original was put in a safe and a copy of it was hung on the wall.

‘Recent work with an archivist brought the original letter to my attention and I decided to take a photo of the original document and post it on Instagram.

‘Before it was rediscovered, the company knew of the letter’s existence but not where it actually was.

‘It had been in an employee’s draw, and was found when the desk was tidied out upon retirement.

‘We also have a hand-written sales ledger from 1909 – 1912 and found the entries for the wines that were aboard the Titanic in that when we got it re-bound a few years ago.’ 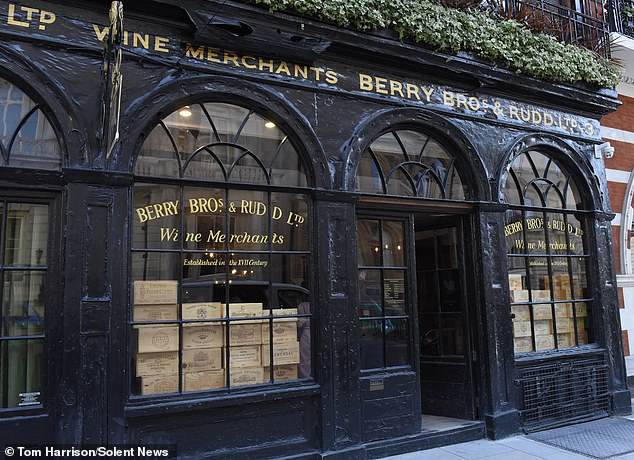 The ledger reveals that replacement orders of the wine and spirits were sent out after the ship’s sinking.

The 69 cases of wine would have been loaded onto the fateful ship before it set sail from Southampton, Hants on April 10, 1912.

Mr Willis added: ‘Now, the letter will be kept as part of the company’s history.

‘It is kept in the safe to preserve it, and rarely sees the light of day.

‘A copy of the letter is available to see on the wall in Berry Bros & Rudd’s home at No.3 St James’s Street, London.’