Eurosceptic Tory MPs who refuse to back a new Brexit deal face being kicked out, the Daily Mail understands.

Amid rising hopes of a deal, close allies of Boris Johnson are drawing up detailed plans for a Commons showdown at the end of next month.

They say the Prime Minister is prepared to take the whip away from any Brexiteer ‘Spartans’ who refuse to fall in line.

Tory whips have been told Mr Johnson will mete out the same punishment to rebels from the European Research Group as faced by No Deal rebels.

After they joined forces with Jeremy Corbyn and Opposition groups to scupper his Brexit strategy, Mr Johnson expelled 21 Tories, including big names such as former chancellor Ken Clarke.

A senior Tory source told the Mail: ‘The same rules will apply. If you don’t vote for the deal, you’re out.’

Tory whips believe that the hardline strategy, coupled with possible support from Labour MPs who have voiced regret at their failure to back Theresa May’s deal, could be enough for Mr Johnson to push a deal through Parliament next month.

The Brexit ‘Spartans’ were the group of ERG members who refused to back Theresa May’s deal on any of the three times it came before the Commons.

At the end of March, 34 Tory rebels voted against the Brexit deal, including 28 so-called Spartans and six die-hard Remainers.

Two of the Spartans, Priti Patel and Theresa Villiers, are now in the Cabinet as Home Secretary and Environment Secretary respectively.

But a number of other key figures, including ERG chairman Steve Baker, his deputy Mark Francois and the veteran Eurosceptic Bill Cash, have indicated they would vote against the Withdrawal Agreement even if the PM succeeded in stripping out the controversial Irish backstop.

Chief Whip Mark Spencer has told colleagues the number of hardcore anti-deal MPs could be whittled down to less than ten. The critical factor will be securing the support of the DUP’s ten MPs.

As well as being crucial to getting enough votes, the DUP’s agreement to any deal will make it easier to bring Brexiteers on board.

In a further sign of Downing Street’s determination to get a deal through, officials have drawn up plans to force MPs to sit ‘day and night’ so it could be passed in just ten days.

Nikki da Costa, the PM’s head of legislative affairs, says privately that she is confident a deal could be passed if one emerges from the EU Council on October 17 and 18.

The rebels had the whip withdrawn after voting to take control of Parliament and pass the law to stop No Deal.

The rebels were told they would be banned from standing as Conservative candidates at the next election.

Some are considering legal action against the PM, while others have warned they could stand as Independent Conservatives, potentially splitting the vote in a string of key seats. 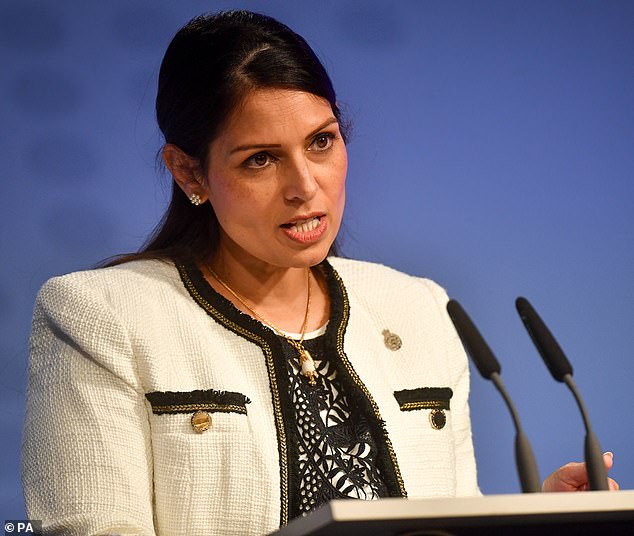 Two of the Spartans, Priti Patel (pictured) and Theresa Villiers, are now in the Cabinet as Home Secretary and Environment Secretary respectively

At the time, several Cabinet ministers, including Nicky Morgan and Amber Rudd, urged Mr Johnson to adopt the same tough tactics with Brexiteers if they failed to toe the line.

Tory sources said that the votes on any Brexit deal next month could also provide a route back for the 21 Remainer MPs who were suspended.

One source said: ‘There is a ladder to redemption, but it is a long one and anyone hoping to climb it would have to be with us every rung of the way.’

A string of senior Tories, including Theresa May, have urged Mr Johnson to allow the rebel MPs to return to the fold.

The tension in Westminster comes as the PM’s chief adviser Dominic Cummings last night said the Government would be plunged into ‘complete carnage’ if the Supreme Court rules next week that Mr Johnson’s decision to suspend Parliament was illegal.

In a worst-case scenario, Mr Johnson could be forced to recall Parliament.