Tory revolt forces Cameron to pave the way for an embarrassing U-turn over £1.2billion disability benefits cut as he vows to ‘get it right’ and protect the vulnerable

David Cameron has paved the way for an embarrassing U-turn over planned cuts to disability benefit by promising to get reform right.

Speaking at a press conference in Brussels, the Prime Minister said it was ‘important’ to ‘protect the most vulnerable people in our country’.

Tory MPs were yesterday openly revolting at plans to slash £1.2billion from Personal Independence Payments (PIP) by removing weekly payments from people who need ‘aids and appliances’ to help them dress and use the toilet.

Labour has demanded the Government abandon the plans and promised to force a Commons vote with a view to causing an embarrassing defeat.

Downing Street yesterday said there was no change to the policy.

But Mr Cameron last night said: ‘We will always protect the most vulnerable people in our country and make sure they get the help they need.

‘We are going to discuss what we’ve put forward with the disability charities and others, as the Chancellor said today, and make sure that we get this right. It’s important.

‘It is important that this increase in money goes to the people who need it most, that we make sure that the system is working properly. That’s what this is all about.’

Last night, a government source indicated that the unpopular changes may not ever be introduced, saying: ‘This is going to be kicked into the long grass.’

They added: ‘We need to take time and get reforms right, and that will mean looking again at these proposals. It’s not an integral part of the Budget – it’s a DWP package that came out beforehand.

‘We are not wedded to specific sums – it’s about making sure what will be an increasing amount of money goes to those who need it most.

‘This Government is spending more than Labour ever did on support for the sick and disabled. We’ll listen to ideas on how we make sure the money goes to the right people.’

George Osborne confirmed the plan in Wednesday’s Budget and a Government consultation on the plans – which would strip weekly payments worth £3,500 a year from 370,000 disabled people – ended a week ago.

The Chancellor said yesterday he will consult with disability charities to make sure planned benefits changes are ‘absolutely right’ but insisted he would press ahead.

Backbencher Jonny Mercer said the regular payments were a ‘lifeline’ for the ‘most vulnerable group in society’.

Senior Tory MP Sarah Wollaston said it would be ‘entirely wrong’ to proceed at this stage. 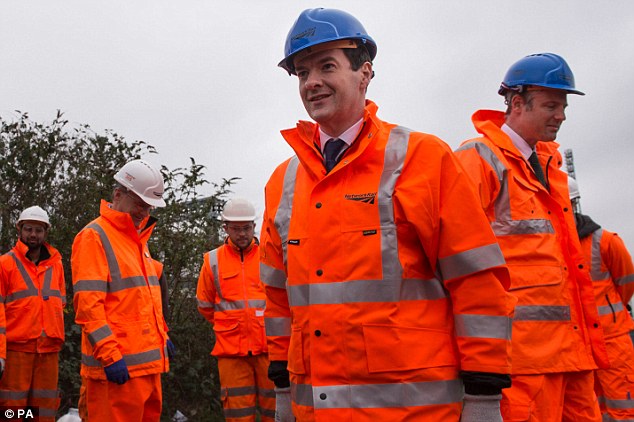 Chancellor George Osborne, pictured with Zac Goldsmith, right, on a railway visit yesterday, has also indicated there could be a rethink – despite announcing the policy in his Budget on Wednesday

She told the BBC it was ‘highly likely’ the Government would change the plans, adding: ‘I think it’s very clear that this isn’t the mood of the Commons and I think that the Government is likely to take stock and start again.’

Andrew Percy launched the rebellion on Wednesday when he told Mr Osborne he should have raised petrol duty to cover the cost protecting PIP.

David Cameron ruled out slapping a new tax on chocolate yesterday, as he defended the controversial levy on fizzy drinks.

The Prime Minister has come under fire from some Tory MPs this week over a new tax on sugary drinks designed to tackle childhood obesity.

Campaigners warn that the tax, which is equal to 8p on a can of Coca-Cola, will hit the poor. And they claim it could be the thin end of the wedge, with other unhealthy foods potentially facing new taxes in the future.

But asked whether the tax could be extended to chocolate, Mr Cameron said: ‘On the tax on sugary drinks I think this is a good proposal.’

He added: ‘Those are the proposals we have brought forward. If we wanted to bring forward other proposals, we would have done’.

Speaking in Brussels, the Prime Minister also voiced sympathy with parents over the struggle to control their children’s diets.

He said: ‘As for what happens in the Cameron household, like all parents there is a bit of a battle, as you can imagine, over sugar intake.’

The row has clear echoes of last year’s row over tax credit cuts which forced Mr Osborne into a humiliating £4billion U-turn.

She said: ‘First of all we’ve got to finish the consultation and the conversations that we’re having with MPs, but also with disability groups and others, before we even bring any legislation forward.

During a visit to Loughborough University’s Sports Technology Institute yesterday, Mrs Morgan refused to be drawn on her earlier comments, telling reporters: ‘I’m not going to answer any questions on it. You can ask, but I’m not saying anything.’

He said: ‘Nicky Morgan was either too ashamed to admit cuts to disability benefits are Tory policy or she was signalling the start of a sharp U-turn.

‘Either way, she and the rest of the Tories are quickly realising there’s no justification for these cruel cuts.

‘They should now do the fair, sensible thing. Scrap these cuts completely and spare hundreds of thousands of disabled people who’ve already suffered enough under the Tories.’

Labour leader Jeremy Corbyn yesterday said his party would force a Commons vote on the cuts.

He told the BBC: ‘I hope and believe all opposition parties will join with us in that.

‘I believe a number of Conservative MPs are so upset about this they too will vote against the Government.’

Mr Percy signalled at Tory unease over the cuts as he suggested a rise in fuel duty would have been a price worth paying to protect the disability element in the PIP.

He said: ‘If I can be honest, I’d rather have a penny or two on fuel if it protects PIP. A point a made in weeks running up to budget.

‘The reason I say that is because I do feel if opposing something, we should also identify where else it could be funded from.’

‘I think it sends out the wrong message about the priorities of the Government.’

Liberal Democrat Greg Mulholland said: ‘George Osborne has a tin ear for public opinion and how average people live their lives but he needs to hear this.

WHAT IS THE DISABILITY BENEFIT CAUSING A NEW TORY ROW?

How much do claimants receive?

PIP is usually paid once a month and is tax free. It is made up of two components – daily living and mobility.

The daily living component is granted to those who struggle with day-to-day tasks such as preparing or eating food, dressing, washing, reading, managing medicines, and making decisions with money.

It is worth between £55.10 and £82.30 a week and will be subject to tighter restrictions under the proposed plans.

How are people assessed?

Claims are assessed by an independent healthcare professional, and may involve a face-to-face consultation.

Claimants are given a score based on how much help they need. The more help needed, the higher the score.

How many people claim PIPs?

The squeeze on PIPs will see up to 640,000 people affected by tighter criteria, brought forward after a review by health professionals found people were being awarded points for aids and appliances already in homes or provided by the NHS and councils.

‘The Liberal Democrats will use every tool at our disposal to block him from bringing in this legislation.

‘He needs to drop this vicious attack on disabled people.’

The Government website lists the consultation on ‘aids and appliances’ in the personal independence payment as ‘concluded’.

In his Budget speech on Wednesday, Mr Osborne said: ‘On welfare, last week (Iain Duncan Smith) the Secretary of State for Work and Pensions set out changes that will ensure that within the rising disability budget, support is better targeted at those who need it most.

‘Let me confirm that this means the disability budget will still rise by more than £1 billion, and we’ll be spending more in real terms supporting disabled people than at any point under the last government.’

Defending his plans Mr Osborne told the BBC: ‘We have got to make sure we have a system that works.

‘I’m always happy to listen to proposals about how improve on that but we have got to control our disability budget and make sure help goes to the people who need it most.’

He added: ‘We’ve got to make sure we control our disability budget so that as it rises – and I stress this point – as it rises it absolutely goes to the people in our society who need it most.’

The Government website lists the consultation into the personal independence payment aids and appliances rules concluded on March 11, the week before the Budget

The Prime Minister’s official spokeswoman added: ‘The Government are clear on why we are proposing these changes.

‘Spending on main disability benefits has gone up and we don’t think the personal independence payment is working as well as it could at making sure the money that is going into this is being focused on the right people.’

She added: ‘Health professionals were asked to review cases where people qualified for personal independence payments based on the need for aid and applicances for their disability.

‘What they found was in 96% of cases they were unlikely to have ongoing extra costs – so for example they might have needed to have a hand toilet rail fitted in their home.

‘Once that was completed they were unlikely to need significant extra costs over a sustained period that would justify a weekly allowance.’ 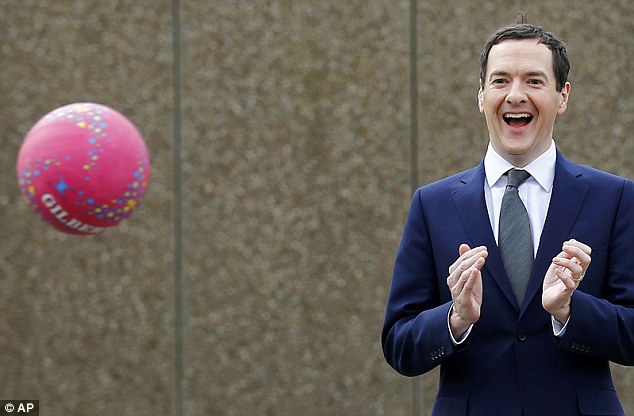 Chancellor George Osborne, pictured yesterday promoting his Budget on a school visit in Leeds, has insisted the overall disability budget is rising 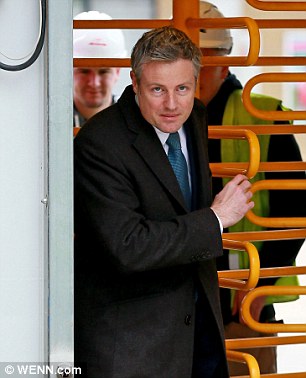 Zac Goldsmith has been sacked as a patron of his local disability charity after he voted for cuts to disability benefits.

The Conservative candidate for City Hall in London’s mayoral elections in May followed the Government line on £30 a week cuts to the employment support allowance.

The MP was slammed by Richmond AID, a disability benefits charity which works in his south west London constituency.

Lucy Byrne, the charity’s chief executive, told the Daily Mirror: ‘We are shocked and disappointed to find that both our local MPs here in the borough of Richmond voted for this cut, one of whom is patron of our organisation.

‘Having voted for this brutal cut we believe that Zac Goldsmiths’ position as patron is no longer tenable.’

Shadow work and pensions secretary Owen Smith said the row demonstrated Mr Goldsmith was ‘not fit to be Mayor of London’.

He said: ‘It is shocking that someone who wants to be Mayor of London voted to take £30 a week away from half a million disabled people – at a time when they are already struggling to make ends meet.’