Dozens of children have been left in tears after a British company cancelled a once-in-a-lifetime holiday to Disneyland Paris just two days before they were due to leave.

Angry parents say their requests for a refund from several days out organised and then scrapped by Day Trips Newport have been ignored by the tour operator.

The firm claims to organise coach trips to Disneyland, the Harry Potter Studio Tour, Chessington World of Adventures and several other British zoos and theme parks.

Father-of-five Darren Small, 39, pictured with his family, paid around £2,500 in installments over the last year to take his family to Disneyland Paris as a pre-Christmas treat

But it has been inundated with complaints from furious parents who claim trips have been cancelled at the last minute and their requests for a refund are being ignored.

Some even claim they have been blocked by the Welsh company’s owners on Facebook after sending them messages to ask for their money back.

Father-of-five Darren Small, 39, from Newport, paid around £2,500 in instalments over the last year to take his family to Disneyland Paris as a pre-Christmas treat.

But he began to get suspicious when his requests for a confirmation of their departure time were ignored. 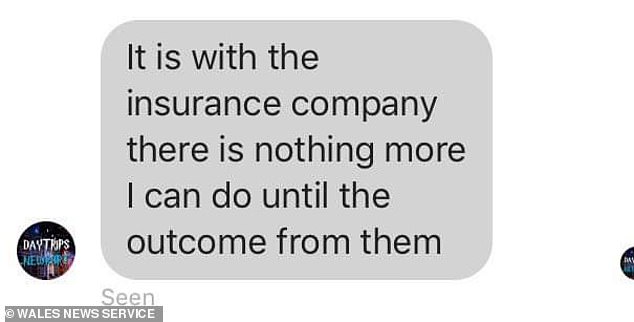 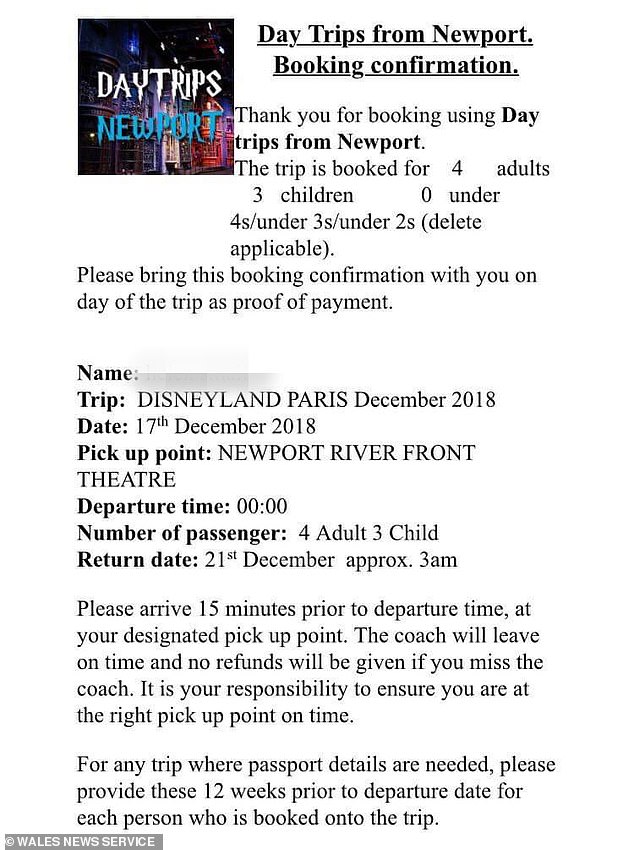 He said: ‘We contacted Disney’s Hotel Santa Fe, where we were meant to stay, but there was no record of our name at all. We went in to panic mode then.’

After repeatedly sending messages to the holiday organisers he was then told the trip, which was due to take place over last weekend, was no longer going ahead.

Mr Small said his children have been left devastated by the news, particularly as the holiday was part of their Christmas present.

The father, who confirmed he has contacted the police, added: ‘One of my daughters, who is six, has autism. 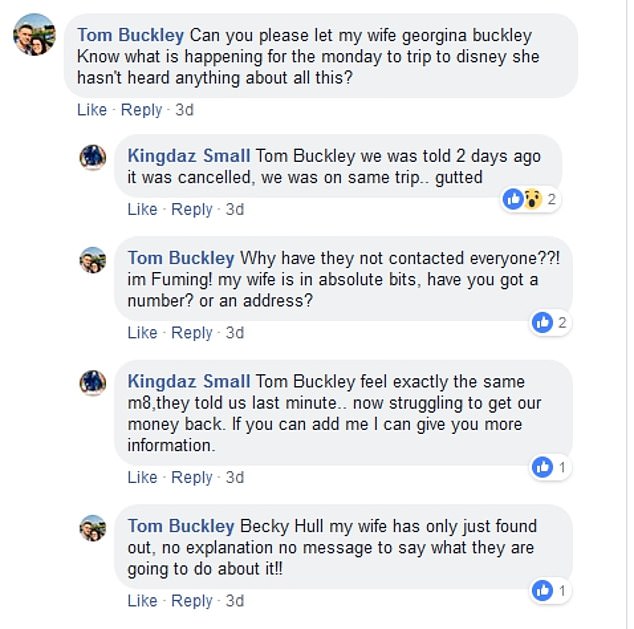 ‘She can’t understand why we are not going to Disneyland. I just want people to know about the situation. They (Day Trips Newport) can’t do this to families.’

And the Small family are not the only ones to be let down by the company. Dozens of angry parents have taken to the firm’s Facebook page to rant about their treatment.

Louise Patrick wrote: ‘Why ain’t you answering any of us? You have blocked me and my partner on messenger also! I want a refund! I’m fuming.’

Angela Bolwell said: ‘Shocking this is same happened to myself and my very upset family… Chessington for Halloween last year!’ 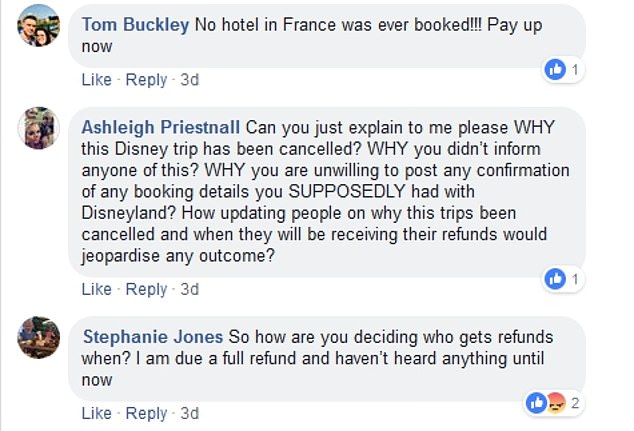 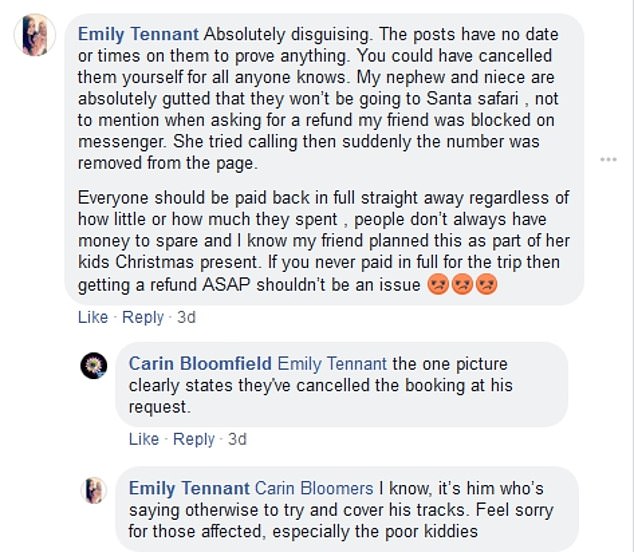 Others only found out their trips were cancelled after seeing others take to Facebook to complain. 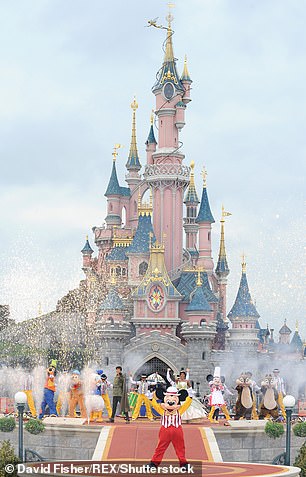 Tom Buckley said: ‘Why have they not contacted everyone?! I’m fuming! My wife is in absolute bits. No explanation, no message to say what they are going to do about it!’

Emily Tennant added: ‘Absolutely disgusting… My nephew and niece are absolutely gutted that they won’t be going to Santa safari, not to mention when asking for a refund my friend was blocked on Messenger.

‘She tried calling then suddenly the number was removed from the page. Everyone should be paid back in full straight away regardless of how little or how much they spent.

‘People don’t always have money to spare and I know my friend planned this as part of her kids’ Christmas present. If you never paid in full for the trip then getting a refund ASAP shouldn’t be an issue.’

Despite the company apparently running trips for at least a year, it was only registered on Companies House by owner Matthew Neale in August of this year. 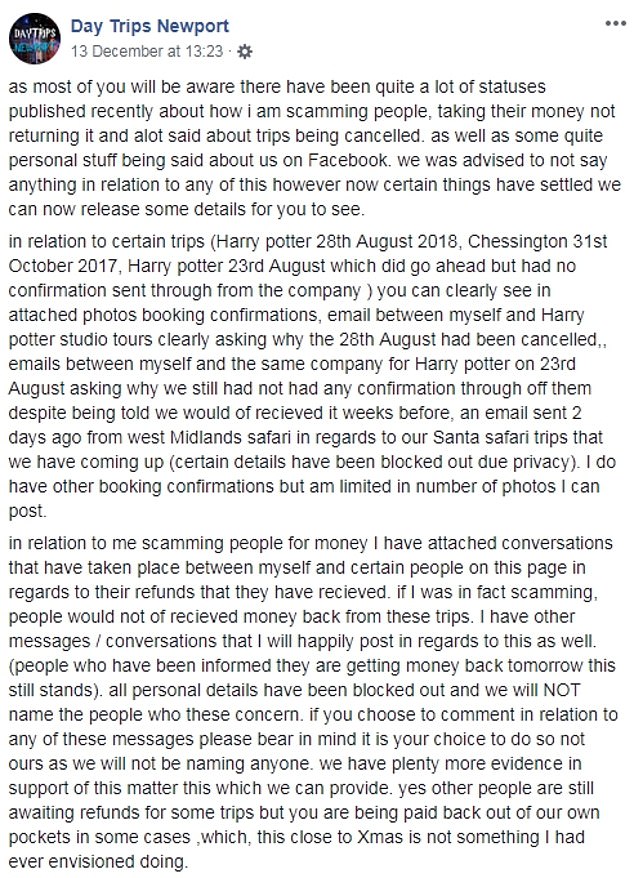 A garbled message posted on the Day Trips Newport Facebook page by the owners last Thursday said: ‘It has come to our attention that some people have not paid in full for upcoming trips. Any one that has not paid in full would not be entittled [sic] to come on the trip. This includes people from Xmas trips.

‘Whilst we appreciate certain things get prioritised at this time of the year, as you would appreciate having 19 people not pay for a trip in full is an expense that could not be covered. I have previously said I do not do these trips for the money. I work full time and have three jobs to support my family.

‘It was purely a way of visiting places and making them accessible to other people.’

A Gwent Police spokesman said: ‘At approximately 6.25pm on December 12, 2018, we received an allegation of fraud from a member of the public in the Newport area.

‘Arrangements were made for an officer to meet with the caller to discuss the report.’