A 15-year-old boy posted a tragic final Snapchat post saying ‘On the ice baby’ just moments before he fell through a frozen pond on Wednesday night and drowned.

The accident happened when David was walking across a frozen pond in a park in Carteret, Middlesex County, New Jersey, with another teenager.

‘On the ice baby’: The haunting final Snapchat post (above) taken by the 15-year-old boy just moments before tragedy struck 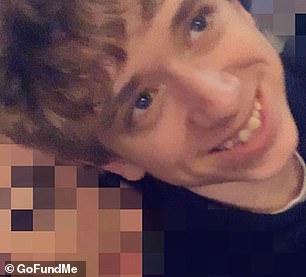 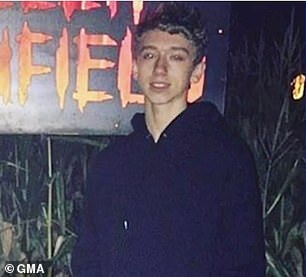 Witnesses told CBS Local `they saw a group of teens skating on the pond before the tragedy occurred, despite signs warning, ‘Danger…Stay off the ice’.

The other boy managed to pull himself out of the water to safety but David was trapped in the water for around an hour.

First responders grappled to save the teen, using ropes and diving equipment to reach him.

He was eventually dragged from the water and rushed to University Hospital in Newark where he later died.

Brian Max, the boy’s uncle, confirmed to PIX11 that David died around 3:30 am Thursday.

DeAngelis, who described her nephew as ‘funny, goofy’ and ‘innocent’, said the family had been able to say their goodbyes to the boy in hospital that morning.

‘He was under the water for too long. They couldn’t find him so the dive team had to come and find him. He was there for maybe 40 minutes, maybe longer, could have been an hour,’ she said.

She warned other families to tell their kids to stay off the ice: ‘I just hope everybody tell their kids not to go on the ice. Don’t do that. I mean, kids are going to be kids but tell them.’ 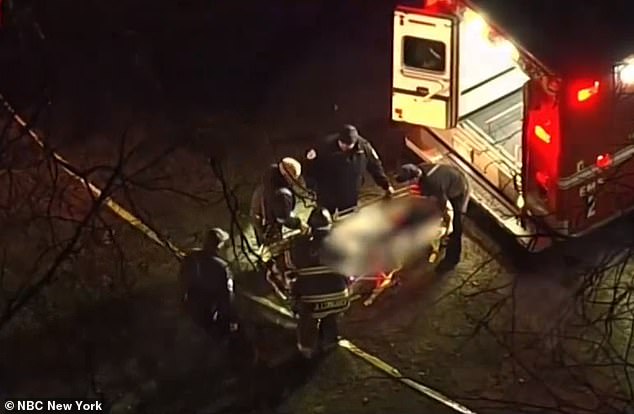 The accident happened when David was walking across a frozen pond (pictured) in a park in Carteret, Middlesex County, New Jersey, with another teenager

‘Our small community is saddened and shocked over this tragedy; we take solace in knowing that our emergency services responded and did all they could in an attempt to rescue him.

‘The brave men and women of our Police Department , Fire Department, and EMS were joined by emergency responders from surrounding communities, and risked their own safety in their effort,’ he said.

The tragedy came the same night as another teen boy died in eerily similar circumstances in an unrelated accident on the ice just 20 miles away. 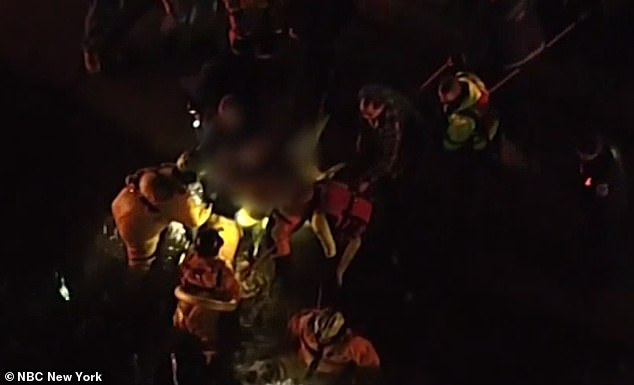 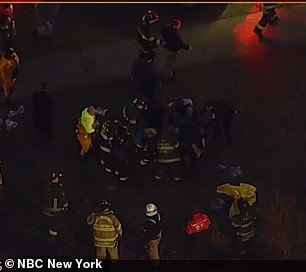 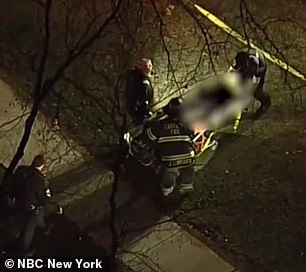 ‘He was under the water for too long’: Dive teams were unable to reach the boy in time

The boy, 13, who has not yet been named but has been confirmed as an eighth-grade pupil at Churchill Junior High School, died after falling through a different icy pond in East Brunswick, New Jersey.

Tragedy struck when three boys were reportedly playing on the pond near Civic Center Drive behind police headquarters just before 5 pm Wednesday. They all fell through the ice into the freezing water.

Two boys managed to get out of the water and raise the alarm but the other boy was trapped.

Officers formed a human chain in efforts to rescue the boy but he slipped under the ice, East Brunswick Lieutenant Frank Sutter said.

When firefighters and a water rescue team arrived on the scene the boy was pulled from the water and given CPR. It had taken almost an hour to rescue him, ABC7 reported.

He was taken to Robert Wood Johnson Hospital where he was pronounced dead 7.45 pm Wednesday, officials said.

‘This evening our East Brunswick School Community suffered the tragic loss of one of our male, 8th grade Churchill Junior High School students in an accident on the frozen pond located at Civic Center Drive. Two other male Churchill students also fell through the ice but were able to self-rescue themselves,’ the post read.

Officials are warning people to stay off icy ponds following the two tragedies.

He added: ‘I used to serve on our water rescue team, and we had a mantra to live by: We said that no ice is safe ice.’