Beyonce Black St. James, the transgender dancer who performed at a Seattle-area homeless agency’s conference in a viral video, has revealed in a statement that her performance was approved by organizers.

The Trans Women of Color Solidarity Network released a statement regarding the matter after news of the performance became the center of controversy when the agency’s director, Kira Zylstra, resigned over the weekend.

Beyonce Black St. James (pictured) and the Trans Women of Color Solidarity Network revealed in a statement that All Home, a homeless agency in Washington, approved her performance beforehand

In the statement, the Trans Women of Color Solidarity Network maintain that St. James was given permission by to perform during the annual conference.

‘Prior to her drag performance, Ms. St. James volunteered her time with a cultural presentation as a featured speaker; additionally, she took the precaution of getting her performance approved by conference organizers and providing numerous announcements about her performance to conference attendees,’ the statement read.

Additionally, the statement says that as a result of the video being shared on social media, St. James has become a victim of harassment, threatening comments and an invasion of privacy. 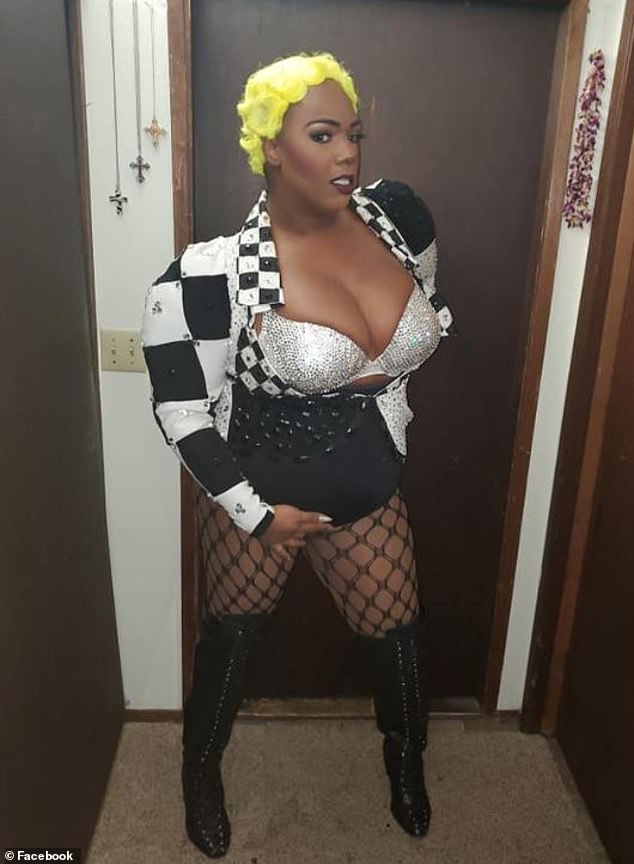 ‘Beyoncé Black St James (pictured)  has been scapegoated, had her life threatened, harassed, and has had her image used by conservative media to fit their own racist, transphobic political agendas,’ the statement read

‘Beyoncé Black St James has been scapegoated, had her life threatened, harassed, and has had her image used by conservative media to fit their own racist, transphobic political agendas,’ they wrote.

James has also allegedly been, ‘…inundated with forms of sexual harassment, doxxing (a targeted form of cyber bullying that releases an individual’s private information to the public), and threats from white nationalists.’

In the statement, the Trans Women of Color Solidarity Network also singled out independent journalist Christopher Rufo, the man who initially shared the video to critique the homeless agency, All Home, for spending taxpayer money on the performance.

They accuse Rufo of cashing in on St. James image.

The statement read: ‘Don’t allow the media the opportunity to cheapen our art, silence our voices and experiences, drag our black trans femme performers through the mud, and make money off the images of black trans women.’ 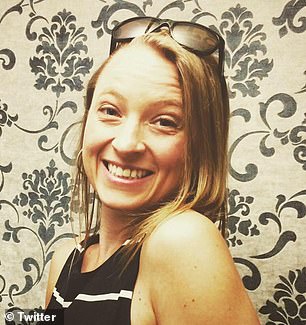 Kira Zylstra, the acting director of All Home based in King County, resigned over the weekend after she came under fire for hiring a drag queen to perform at a work conference

‘Because that is exactly what Christopher Rufo is doing- he is making money exploiting Beyoncé St James images.’

Kira Zylstra, the acting director of All Home based in King County, Washington resigned over the weekend after she hired St. James to perform at a recent annual conference where she twerked, gave lap dances, and kissed attendees.

Zylstra, 40, hired St. James to put on a ‘cultural presentation’ at the company’s conference held at South Seattle College on December 9.

Rufo, who is outspoken on the homelessness crisis in Seattle, shared video of the dancer on Twitter and Facebook criticizing the agency for spending taxpayer money on the performance. 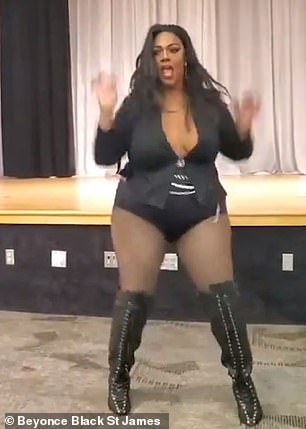 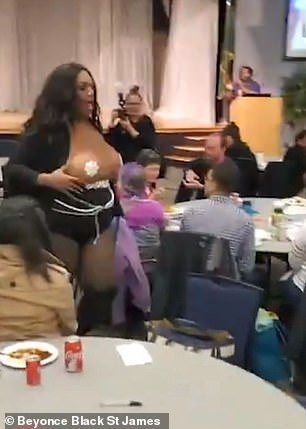 Zylstra hired performer Beyonce Black St. James, a transgender dancer, to put on a ‘cultural show’ at the company’s conference held at South Seattle College on December 9. Video from the event shows the dancer perform a rehearsed choreography on stage then walk through the crowd twerking on attendees and shaking her chest wearing just pasties 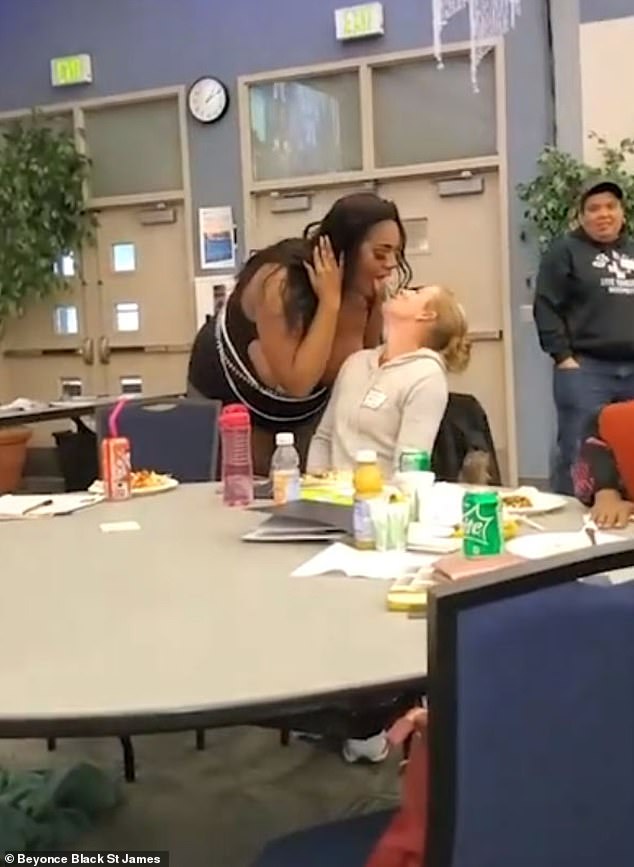 However, Zylstra came under fire for the performance.

‘For years, Seattle has claimed that it “needs more resources” to solve homelessness, but as the video shows, they find it totally appropriate to pay for a transgender stripper to grind on members of the region’s homelessness nonprofits and taxpayer-funded organizations,’ Rufo tweeted.

‘I think this was really a boiling point for people, because they are saying, “You’re asking taxpayers for money, and then you are squandering it on something totally inappropriate in any work place, especially when you are using taxpayer funding,”‘ he said on Facebook.

Some of the people in the audience – who comprised of government employees, non-profit workers, and members of the faith community – were uncomfortable with the choice of entertainment, according to the Seattle Times.

‘I’m not personally offended by it, it just seemed so wrong and out of place for what we were there for,’ Rev. Bill Kirlin-Hackett said.

He said he worried that critics of the homeless would see the video and attack All Home.

‘No one expected it, so I think some people felt uncomfortable,’ one staffer at the conference said to the Times.

‘This is a perfect opportunity to break up All Home. Allowing employees to get their cheap thrills at the expense of innocent homeless faced with another cold winter,’ David Haines, a homeless veteran, said to KIRO7.

Last week Zylstra was placed on paid leave after the video surfaced online and an investigation was opened. She resigned before the investigation finished.

She had served as acting director of All Home for nearly two years.

A spokesperson said that officials at the county’s Department of Community and Human Services found out about ‘a performance that was inappropriate for the conference’ and launched an investigation into the event as well as ‘the leadership of All Home’.

‘The investigation of the event and the leadership of All Home is currently underway,’ a department spokesperson said.

DCHS chief of staff Denise Rothleutner has stepped in to run All Home following Zylstra’s resignation. 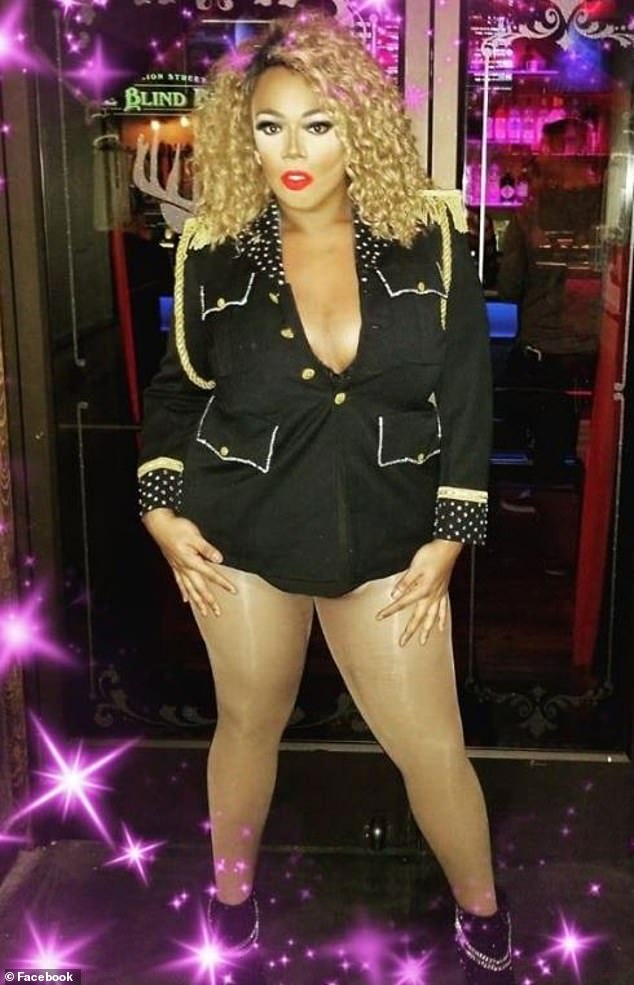 In defense of St. James, The LGBTA Business Alliance said, ‘If this non-profit made an entertainment booking error for their target audience, it’s on them, not the performer, not the art’

The LGBTA Business Alliance shared a statement supporting Beyonce St James after the performance came under fire at the homelessness conference.

‘We love drag at our non-profit events. We love our friends with The Imperial Sovereign Court of Spokane. We love our Beyoncé Black St James. If this non-profit made an entertainment booking error for their target audience, it’s on them, not the performer, not the art,’ the Inland Northwest business alliance that supports the local LGBTQ community said in a Facebook statement.

All Home King County may not be an agency for much longer as Seattle, King County and other suburban governments are moving towards creating a regional homelessness authority that will have more power over budgets and policymaking than All home had.

All Home King County was established in 2015 to address the issue growing homelessness problem in Seattle and surrounding areas.