In experiments, Australian researchers discovered that trigger warnings made the emotional impact of being reminded of a traumatic event worse.

Warning messages may not adequately prepare people to recall a negative experience, but may instead prolong bad memories, they say.

Warnings at the start of shows are generally intended to prepare the viewers for  distressing themes, such as violence or sexual abuse.

For example, 13 Reasons Why, a controversial US teen drama on Netflix, warns: ‘The following episode contains graphic depictions of suicide and violence, which some viewers may find disturbing.’

13 Reasons Why, a controversial US teen drama on Netflix, warns: ‘The following episode contains graphic depictions of suicide and violence, which some viewers may find disturbing’

Part of the idea is to ‘brace’ certain viewers for something that may remind them of their past, triggering the symptoms of conditions like post-traumatic stress disorder (PTSD).

WHAT IS A TRIGGER WARNING?

A trigger warning is an alert that upcoming material containing distressing themes might ‘trigger’ the details and emotion associated with a negative memory to come to mind.

Researchers wanted to find out if trigger warnings really do have this effect.

But the study, conducted by psychologists at Flinders University and published in the journal Memory, indicates trigger warnings do not lessen the blow of recalling past trauma, whether it’s memories of car accidents, violent altercations or sexual assaults.

‘However, often they can be more distressing when they come up on screen as a surprise.

‘Our findings suggest that warning messages may prolong the negative characteristics associated with memories over time, rather than prepare people to recall a negative experience.’

In their experiments, which replicated pre-show Netflix messages, the researchers investigated whether vivid memories of trauma are more distressing if they happen without any warning.

The study was conducted with 209 mainly female participants, aged somewhere between 17 and 50 years old.

They were given two sessions, two weeks apart. In the first session, participants recalled a negative event and completed a series of questionnaires, including how emotionally impactful the event felt.

Crucially, researchers warned some of the participants at the start of this session that recalling a negative event would be distressing, but didn’t offer the same warning to others. 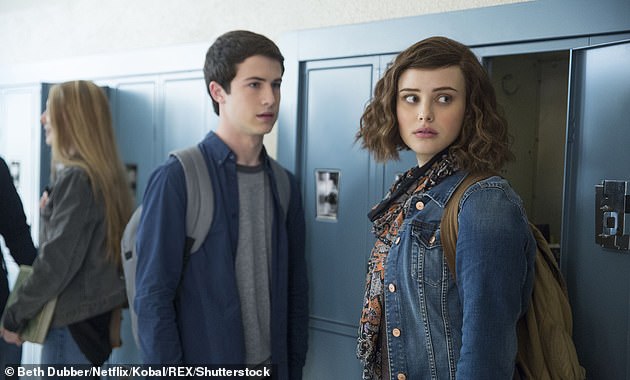 A scene from 13 Reasons Why, now streaming on Netflix. Alerts at the beginning of TV shows including 13 Reasons Why can make traumatic memories worse, the study suggests

The second session (two weeks later) asked all the participants to recall the same event again and answer the same questionnaires.

‘Surprisingly, we found that participants who were warned in the first session reported a smaller decrease in emotional impacts from their negative memory, such as difficulty with sleep and frequency of other experiences, over the two weeks between tests,’ said study author Dr Melanie Takarangi.

‘Our findings suggest that warning messages may prolong the negative characteristics associated with bad memories over time, rather than prepare people to recall a negative experience – which is the opposite to what these messages aim for.

‘They also do not increase the reported use of coping strategies.’

Researchers did not say Netflix and other streaming services should remove their trigger warnings, but the study suggests they may not be very effective.

Netflix’s trigger warning for 13 Reasons Why – which depicts issues including suicide, gun violence, depression, substance abuse and sexual assault – extends beyond a couple of sentences on the screen.

The show, first released on Netflix in 2017, now features verbal warnings from members of the cast at the start of the series when the Netflix users presses play.

‘We hope our show can help viewers start a conversation,’ they say, ‘but if you are struggling with these issues yourself, this series may not be right for you, or you may want to watch it with a trusted adult.’ 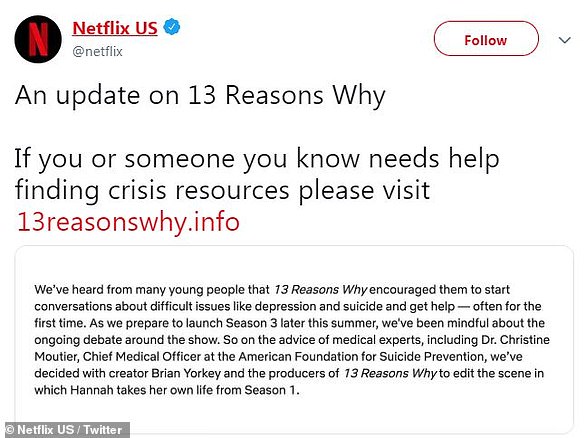 Netflix said: ‘As we prepare to launch season three later this summer, we’ve been mindful about the ongoing debate around the show’

Netflix announced in July 2019 that, nearly a year and a half after it first aired, it had altered the pivotal suicide scene in 13 Reasons Why.

The streaming service released a statement via The Hollywood Reporter, and then through its own Twitter page.

‘We’ve heard from many young people that 13 Reasons Why encouraged them to start conversations about difficult issues like depression and suicide and get help — often for the first time,’ the statement said.

‘As we prepare to launch season three later this summer, we’ve been mindful about the ongoing debate around the show.

‘So on the advice of medical experts, including Dr Christine Moutier, chief medical officer at the American Foundation for Suicide Prevention, we’ve decided with creator Brian Yorkey and the producers to edit the scene.’

The original scene featured a nearly three-minute-long scene, showing a character take a razor blade to her left wrist while lying in her bathtub.

13 Reasons Why returned for its fourth and final series in June 2020.