Trump and Melania hold hands at tribute to Billy Graham

President Donald Trump held hands with his wife Melania Wednesday as they stood in silent tribute to the Reverend Billy Graham under the rotunda of the Capitol.

In death, the Rev. Billy Graham is getting a rare tribute from the nation’s top political leaders under the Capitol Rotunda.

Some 30 family members accompanied Graham’s casket to Washington, where he befriended presidents of both parties and counseled others over seven decades.

Tribute: Melania and Donald Trump stood hand in hand as the Rev Billy Graham’s casket arrived in the Capitol 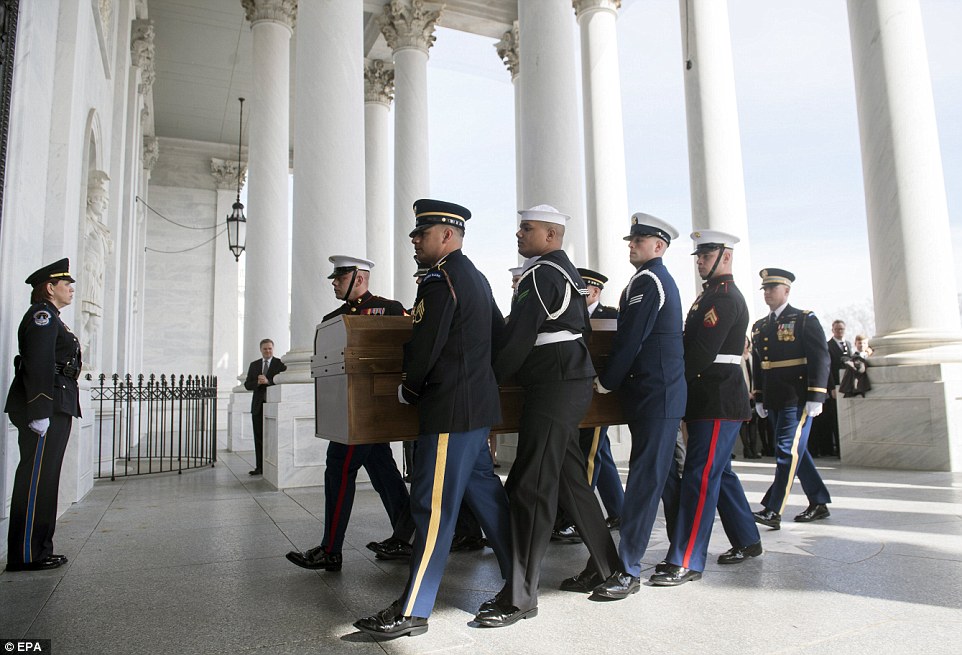 Honor guard: Eight servicemen carry the casket of the Reverend Billy Graham into the Capitol to lie in state 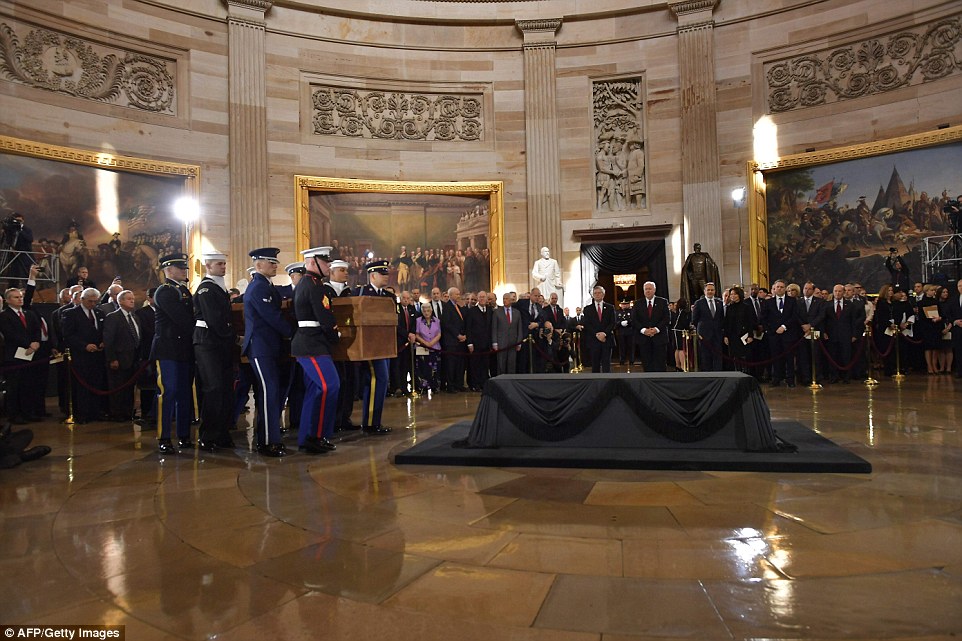 Honor: Reverend Billy Graham’s casket is carried to the center of the Rotunda of the Capitol to lie in honor, by a guard made up of soldiers, Marines, sailors and airmen 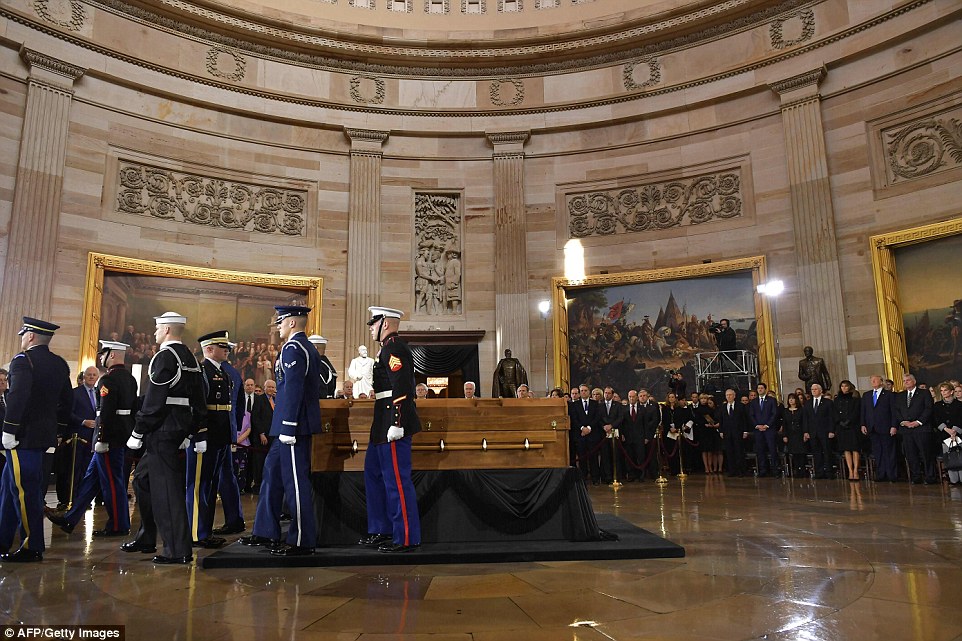 Moment of unity: Political leaders of both parties gathered under the rotunda for the arrival of the casket 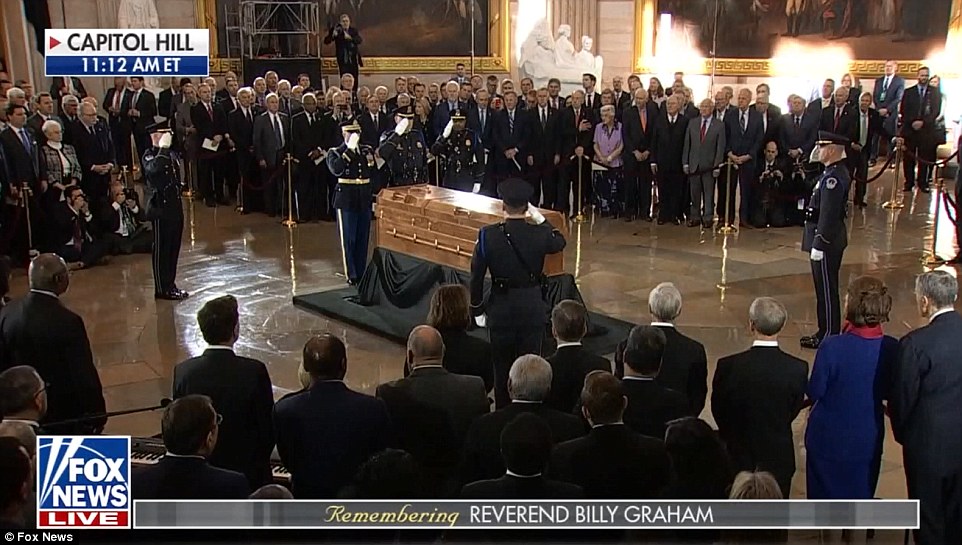 Honor guard: Members of the military who carried the Reverend Billy Graham’s casket into the Rotunda of the Capitol salute after laying it down 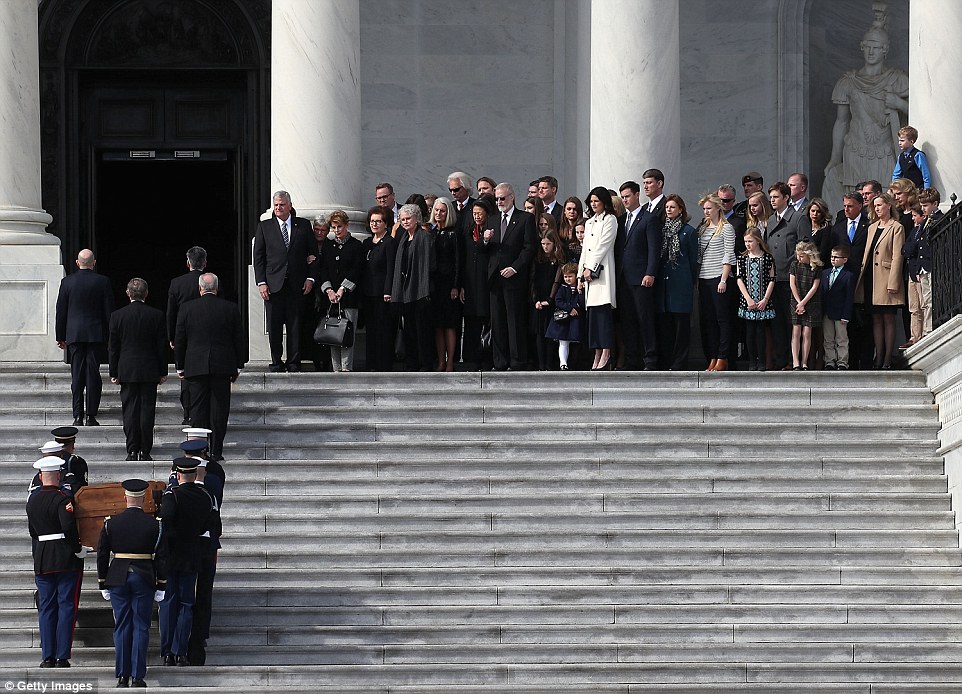 Escort: Franklin Graham, Billy Graham’s son, stood on the steps of the Capitol with other members of the Graham family as the preacher’s casket was carried to lie in honor 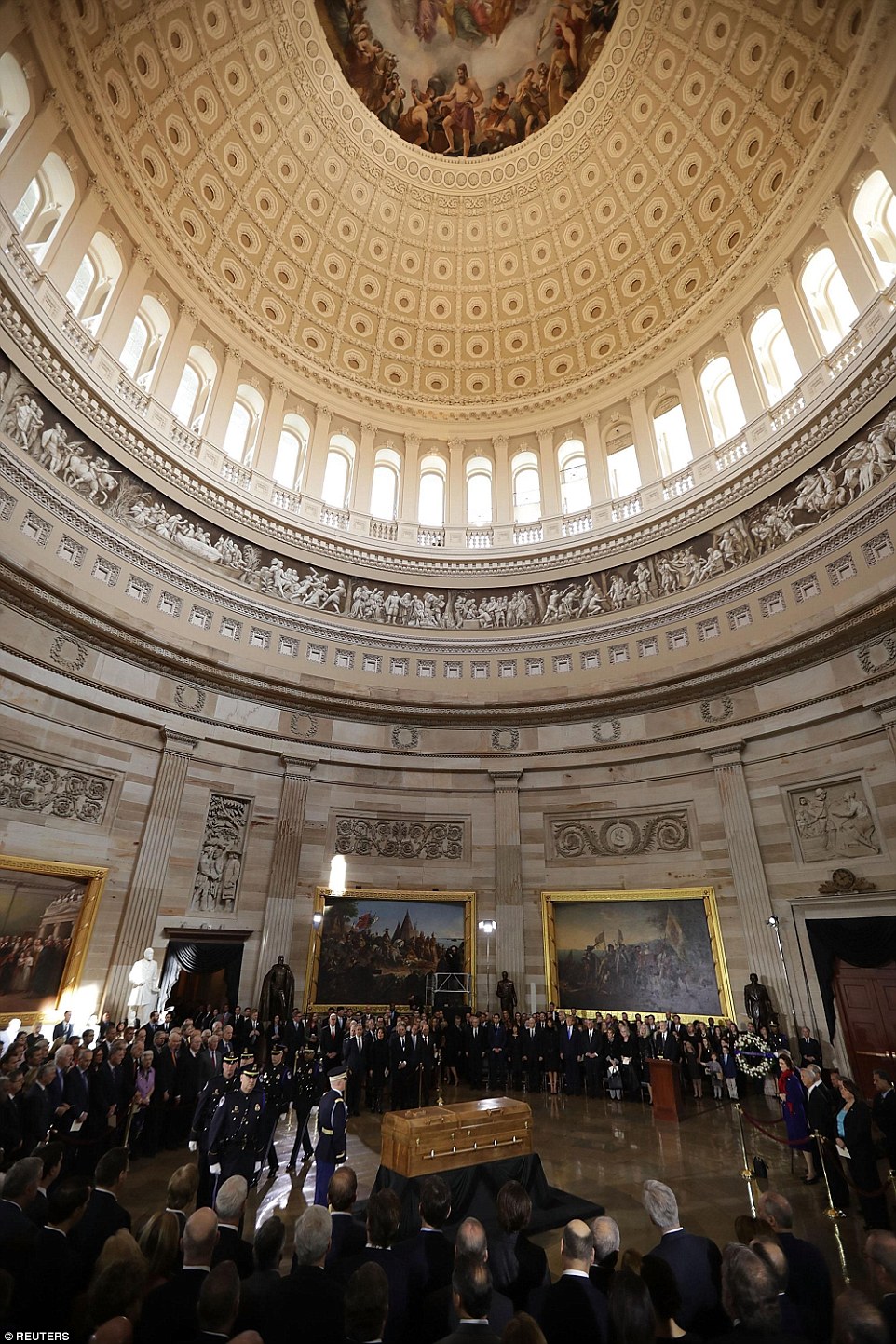 Highest tribute: Reverend Billy Graham is only the fourth non-politician to lie in state in the Rotunda of the Capitol. Senior political leaders and his family gathered to welcome his casket 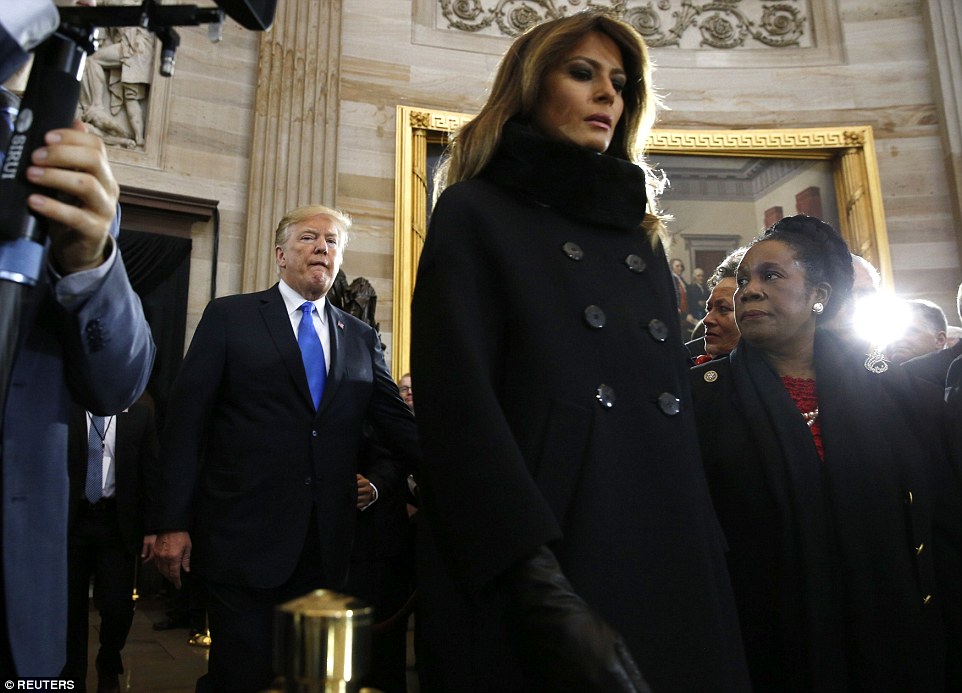 Entrance: Donald and Melania Trump were among the last to enter the Rotunda of the Capitol for the service to begin the lying in honor of the Reverend Billy Graham 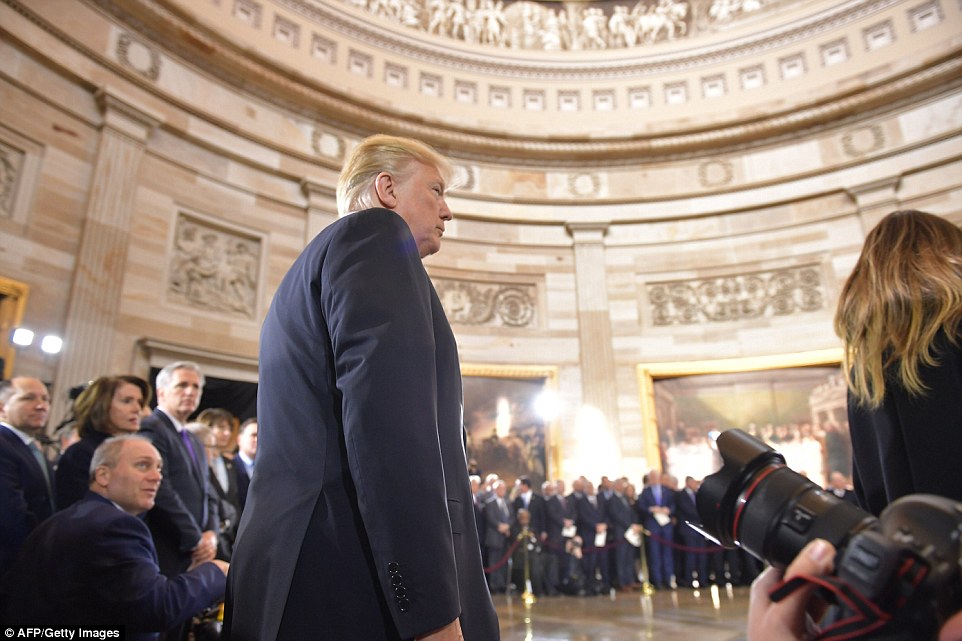 Party unity: Trump walked past Republican House majority whip Steve Scalise, who was beside House minority leader Nancy Pelosi, in the Rotunda of the Capitol for the ceremony 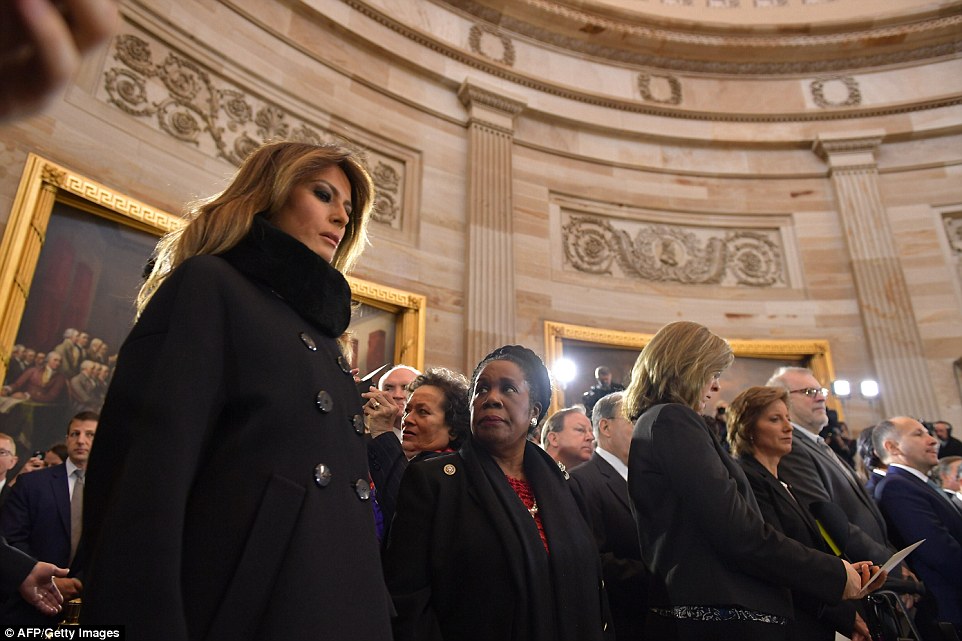 Mourning: Melania Trump was dressed in black to attend the ceremony in honor of the preacher 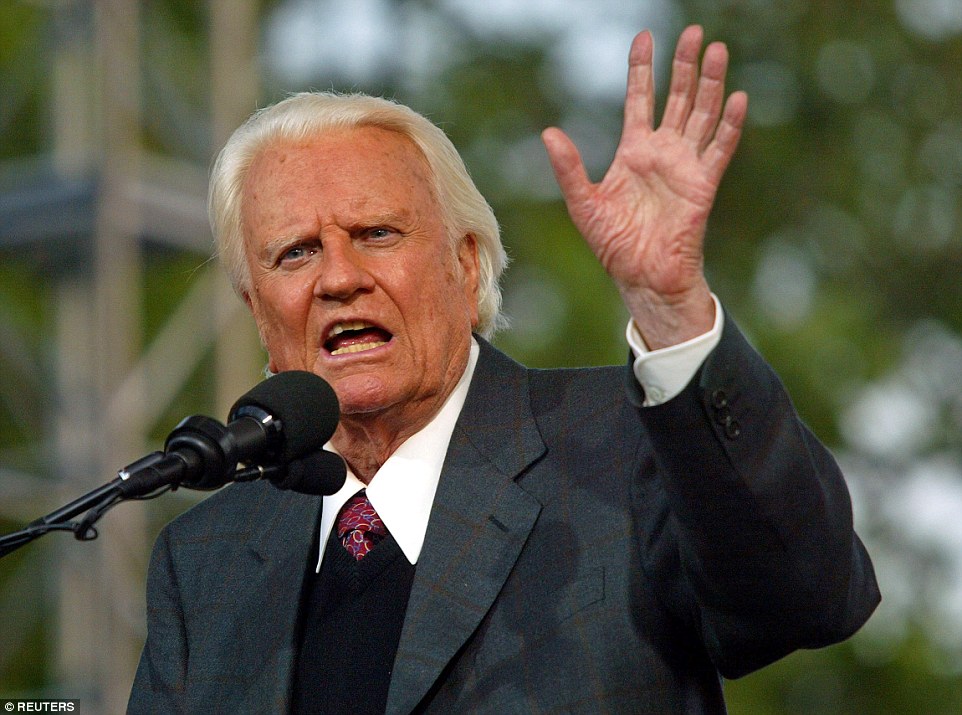 Preacher: Reverend Billy Graham counseled every president from Truman to Obama and met Trump at his 95th birthday party in 2013 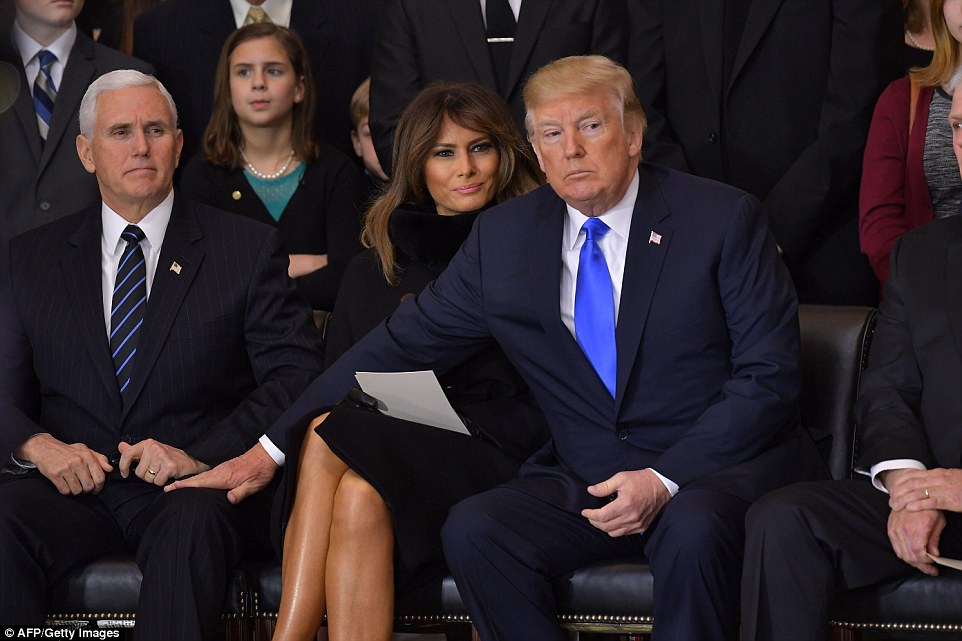 Reaching out: Donald Trump put his hand on Mike Pence’s leg in a gesture of condolence. The vice-president is an evangelical after being brought up a Catholic

Graham’s son, Franklin, tweeted a photo Wednesday of family members loading the casket onto a jet emblazoned with ‘Samaritan’s Purse,’ the name of a Christian relief charity that he chairs.

Graham is lying in honor beneath the iconic dome Wednesday, before a funeral Friday near his home in Charlotte, North Carolina.

The Rotunda entrances were draped with black fabric and set up for lawmakers and family members to stand around the casket, ringed by the Rotunda’s paintings of the nation’s founders.

Graham’s casket will rest on a black-draped catafalque beneath the soaring ceiling and its painting, the ‘Apotheosis of Washington.’

‘If there is any American whose life and life’s work deserves to be honored by laying in honor in the U.S. Capitol, it’s Billy Graham,’ Ryan said.

Though he met every president since Harry Truman and counseled most, Graham grew wary of politics after Watergate. He was closest to Richard Nixon but later said he felt used by him.

Nonetheless, Graham ministered to other presidents until his health began to fail about 10 years ago.

Former President Bill Clinton recalled seeing one of Graham’s crusades as a child, a profound experience that became more amazing over his life. Graham counseled him as Arkansas governor, and later as president in the White House itself.

‘In that little room, he was the same person I saw when I was 11 on that football field,’ Clinton said Tuesday after viewing the casket at Graham’s home. 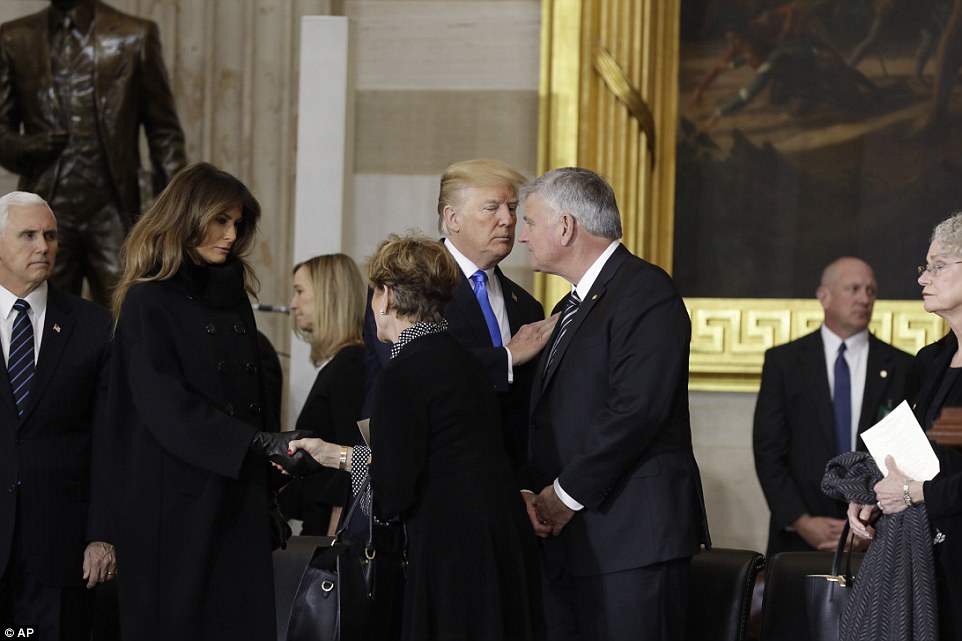 Comfort: President Trump offers a touch of condolence to Franklin Graham, the preacher’s son, who is also a staunch supporter of the president 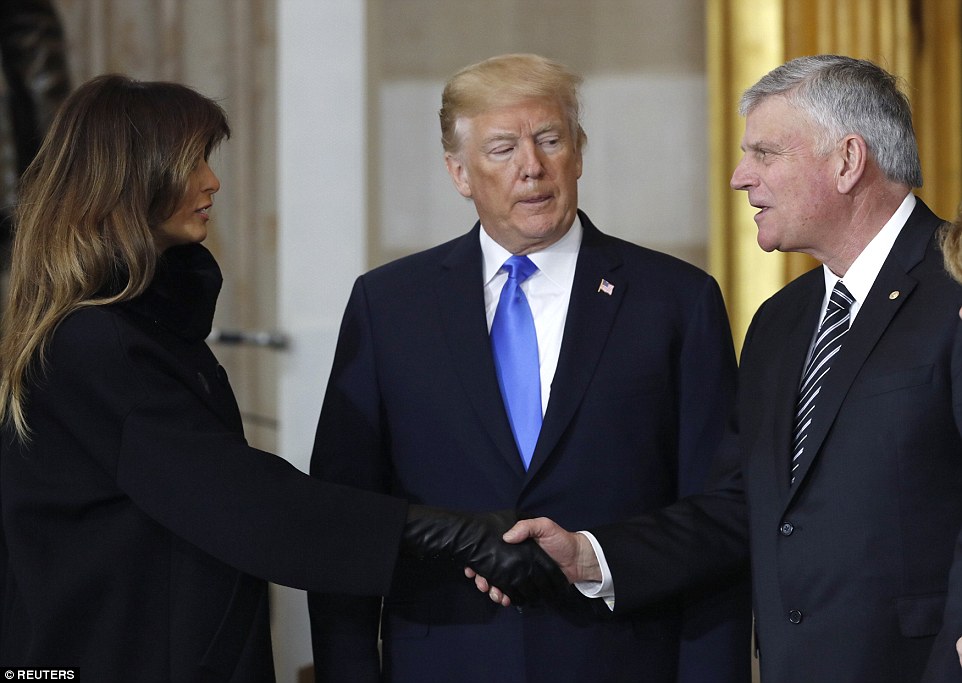 Condolence: Melania Trump, dressed in black and wearing gloves, shakes hands with Franklin Graham as he arrives at his seat beside the president 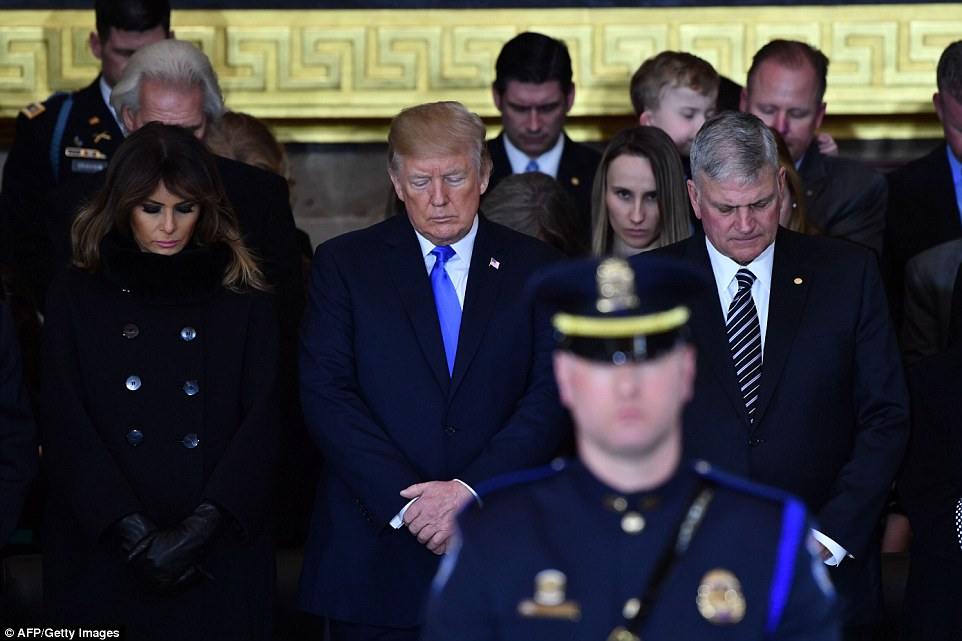 Prayer: The service for the lying in honor of the preacher, who died aged 99, started in silence 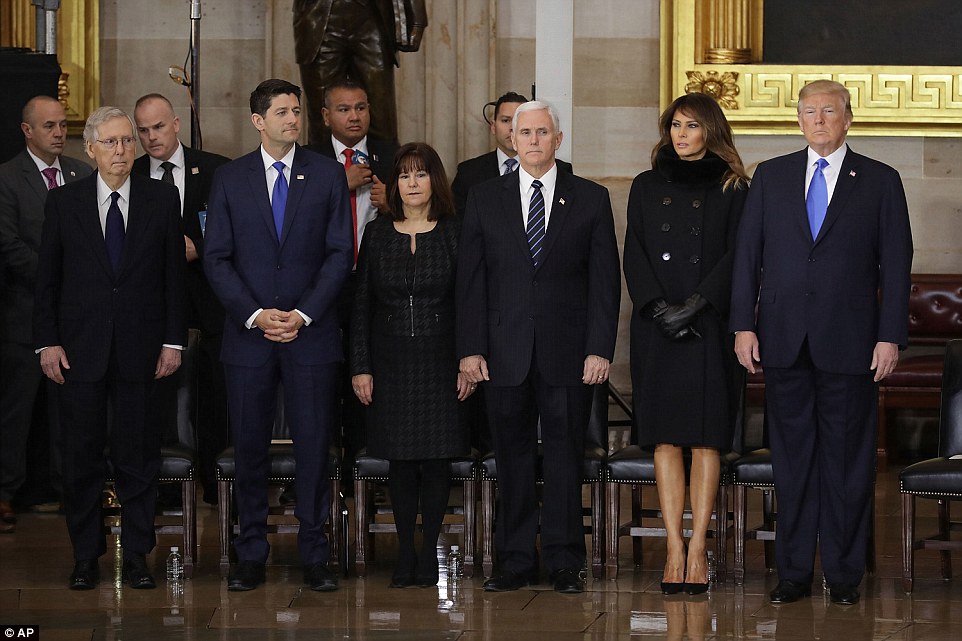 Political symbol: As well as the president and first lady, Vice President Mike Pence and his wife Karen were present, Paul Ryan, the Speaker of the House, and Mitch McConnell, the Senate majority leader

In Washington, Ryan said there had been no doubt that Graham would receive the honor of a public viewing in the Rotunda.

He told reporters that almost immediately upon hearing of Graham’s death he, Trump, McConnell and Rep. Patrick McHenry, who represents the Graham family’s district, agreed it would happen.

Graham shares the honor with 11 presidents and other distinguished Americans, starting with Sen. Henry Clay of Kentucky in 1852 and, most recently, Sen. Daniel Inouye of Hawaii in 2012, according to the House and the Architect of the Capitol.

Graham is only the fourth private person to lie in honor since 1998. The others are two U.S. Capitol Police officers who died in the line of duty in 1998 and civil rights hero Rosa Parks in 2005.

Trump met Graham at the pastor’s 95th birthday party in 2013, but is closer to Franklin Graham Jr.

On Friday, Trump was to attend Graham’s funeral near his library in Charlotte, North Carolina. Former Presidents Jimmy Carter and George H.W. Bush will not be there, meaning no former presidents will attend that service.