Donald Trump claimed on Friday that two Arizona counties are guilty of ‘corruption’ because they give voters a do-over if the signatures on mail-in ballots don’t match the ones that state election officials have on file.

But as of Friday evening, the entire state will be on an even keel.

In a tweet as Air Force One soared above the Atlantic Ocean carrying him to France, the president suggested the lapse in fairness could be reason enough to throw out the results of a tight Senate contest and start again.

‘Just out – in Arizona, SIGNATURES DON’T MATCH. Electoral corruption – Call for a new Election? We must protect our Democracy!’ he wrote on Twitter.

Trump carped Friday morning outside the White House that ‘in Arizona, all of a sudden, out of the wilderness, they find a lot of votes.’

Rep. Kyrsten Sinema, the Democrat in the race, jumped into the lead late Thursday over Republican Rep. Martha McSally as more votes were counted. There are still more than 300,000 yet to be tallied because of a decades-old computer system that wasn’t built to handle this year’s flood of ballots cast with a stamp instead of a click.

Some Republicans raised allegations of fraud as the vote count starts to tip into Democratic terrain.

President Donald Trump suggested that the process of tallying votes in Arizona’s U.S. Senate election is rife with corruption because officials in two large Democrat-majority counties allow voters to fix their signatures up to five days after an election if they don’t match state records 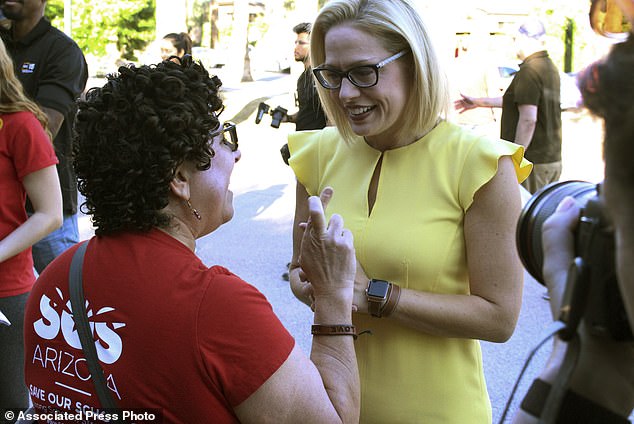 A supporter crosses her fingers as she talks with Democratic U.S. Senate candidate Kyrsten Sinema, who leaped ahead by 9,000 votes on Thursday as more ballots were counted 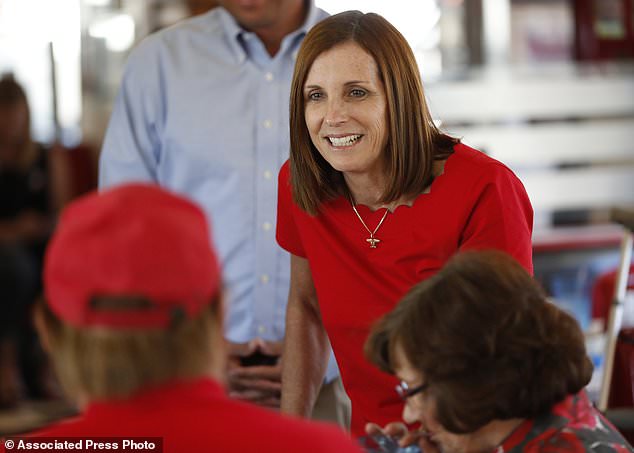 Arizona Republican Rep. Martha McSallyled on Election Day but is now in danger of losing; four Republican Party organizations have sued to force Arizona to use the same standard in all 15 of the state’s counties

A judge Friday heard a lawsuit by the GOP seeking to limit the tally, or expand it in the state’s conservative-leaning rural areas.

If the signature on the voter registration doesn’t match that on the sealed envelope, both Maricopa and Pima County allow voters to help them fix, or ‘cure’ it, up to five days after Election Day.

Arizona Republicans and Democrats agreed Friday to give rural voters the same extra chance to fix their signatures that Democrat-friendly urban counties enjoy.  The settlement was announced in a Phoenix courtroom Friday afternoon.

The counties have until Nov. 14 to address the issue. There’s every indication the vote counting will take that long.

Only a few thousand votes would have been affected by the suit, but every one will count in the razor-close election. 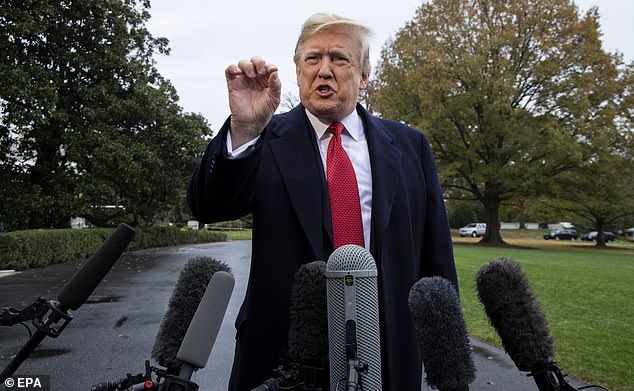 Trump carped Friday morning outside the White House that ‘in Arizona, all of a sudden, out of the wilderness, they find a lot of votes’

The presidnet floated the idea of scrapping the Arizona election, something he doesn’t have the power to order 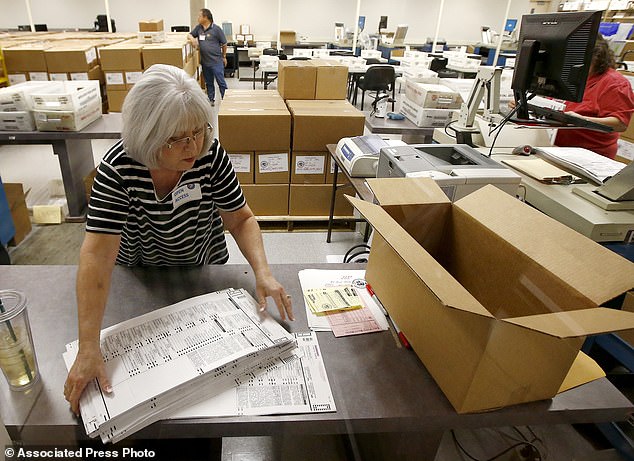 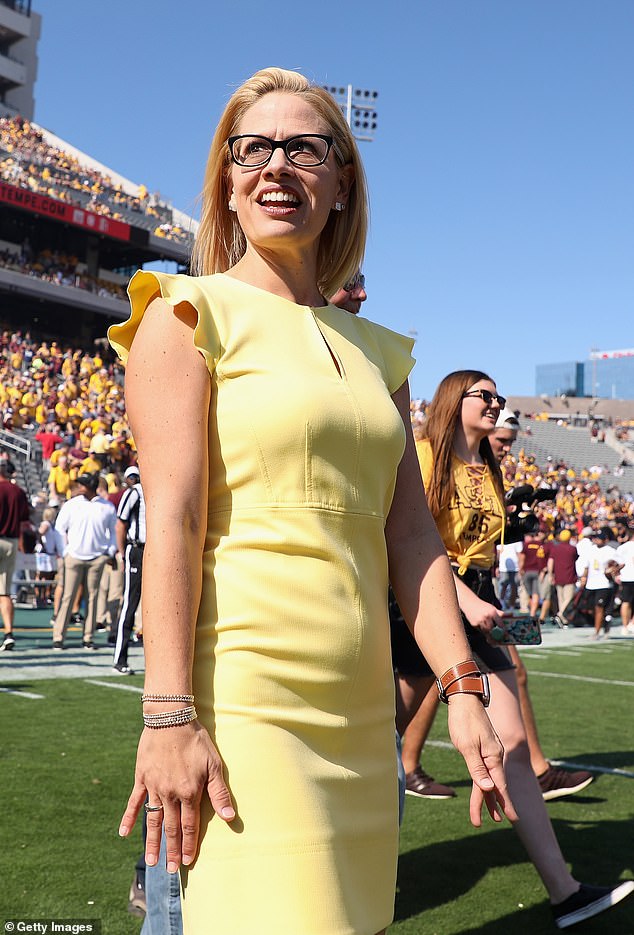 Sinema, the Democrat, attracted the ire of Republicans during the campaign for saying years ago that Americans should be permitted to fight overseas for the Taliban

Sinema advantage is just 9,000 out of 1.9 million votes counted; she had trailed since Tuesday. Her lead came from the two counties singled out by Republicans in their lawsuit, Maricopa and Pima Counties.

Maricopa County Recorder Adrian Fontes said counting may continue another week. ‘We know there’s urgency out there, but we want to get it right, not quick,’ he said.

Arizona is notoriously slow at tallying ballots even though about 75 percent of votes are cast by mail. Each of those ballots must go through a laborious verification process.

The GOP lawsuit centers on that ‘cure’ process. It asks that the judge either stop Maricopa and Pima from contacting voters to fix their ballots after Election Day or permit the rest of the state to do it. At least two other rural counties also allow post-Election Day ‘cures’ but several others do not.

Democrats contended that the GOP is trying to prevent votes from being counted. ‘The Republican Party is doing everything it can to silence thousands of Arizonans who already cast their ballots,’ Democratic Party chairwoman Felicia Rotellini said in a statement.

GOP attorney Brett Johnson said in an interview the party would be happy if the end result is the rural counties are ordered to extend their cure period and more votes are counted. ‘At the end of the day, each vote should be treated the same way,’ Johnson said. 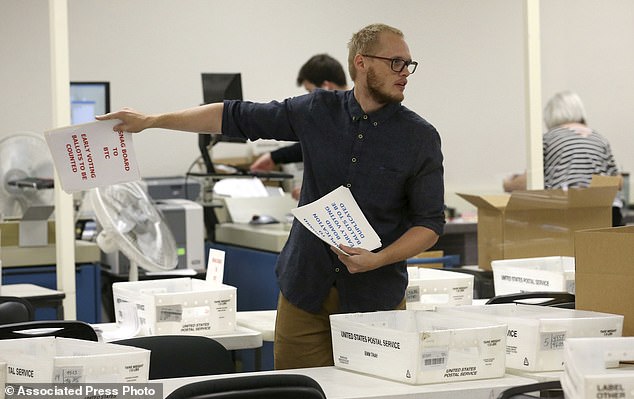 The Senate race between McSally and Sinema remains too close to call, and there are still more than 300,000 ballots left to count 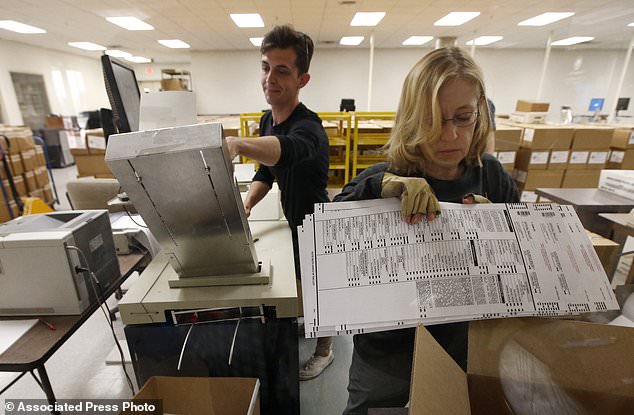 Maricopa County, Arizona’s election computers were built in the 1980s when few people voted by mail, and can only process 75,000 of those ballots per day

The state’s junior Republican Senator, Jon Kyl, issued a statement trying to frame the lawsuit as a question of equal protection rather than limiting urban vote counting. ‘Every single lawful vote in Arizona should be counted,’ Kyl said. ‘And voting laws in our state should be applied uniformly across the map.’

At a brief hearing Thursday, a Maricopa County official said only about 5,600 ballots are at issue in her county and the rate is similar in the 14 smaller counties. More than 2.2 million votes were cast statewide.

There were more than 600,000 mail-in ballots left to process statewide as of Wednesday, about 75 percent in Maricopa County. That huge amount has put pressure on a system that spends a lot of time already verifying the mail ballot signatures.

Fontes said his office’s 1980s-era computer system is partly to blame. It was put in when Maricopa was far smaller and only a handful of its residents voted by mail.

He said the system only allows his office to tally about 75,000 votes a day. There are another 375,000 votes outstanding in Maricopa County alone as of Thursday night. 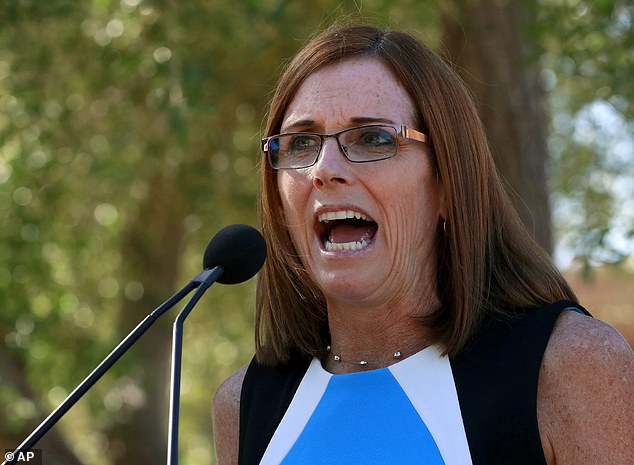 McSally flew A-10 Warthogs in missions in Iraq, logging more than 100 combat hours

The two Senate campaigns have long braced for a slow vote count. McSally is no stranger to the issue. It took The Associated Press 12 days to declare a winner in McSally’s first race for Congress, which she narrowly lost in 2012.

On Thursday, she tweeted: ‘Woke up this morning dreading a long and painful process. I’ve been here before, and now, here I am again.the dentist’s chair.’ She attached a photo of herself leaning back at the dentist’s office, about to get her teeth examined.

Sinema also had to wait for finality in her first congressional election that year, sweating out six long days of vote counts. She prevailed.