Trump keeps up pressure on the Fed to lower interest rates as board prepares to meet and president says China and the E.U. are making smarter moves to take advantage of the U.S.

Donald Trump lashed out at the Federal Reserve’s board of governors on Monday, renewing his demand that they cut interest rates when they meet this week.

He tweeted that the board will ‘probably will do very little’ in comparison to an interest-dropping trend in the E.U. and China that puts the U.S. economy at a competitive disadvantage.

‘The E.U. and China will further lower interest rates and pump money into their systems, making it much easier for their manufacturers to sell product,’ he wrote. ‘In the meantime, and with very low inflation, our Fed does nothing.’

The Fed is poised to cut interest rates for the first time since the Great Recession a decade ago, shoring up America’s defenses as the global economy weakens.

It will mark a striking about-face for the central bank, reversing a rate increase announced just seven months ago. Trump took time to pour salt in Fed Chair Jerome Powell’s wounds, insisting the earlier move was a foolish one.

‘The Fed “raised” way too early and way too much. Their quantitative tightening was another big mistake. While our Country is doing very well, the potential wealth creation that was missed, especially when measured against our debt, is staggering,’ Trump tweeted in a second broadside.

Quantitative tightening is a process in which the Fed shrinks the money supply, usually by buying enormous quantities of bonds that are issued or guaranteed by the U.S. Treasury.

The opposite, quantitative easing, occurs when the board sells those bonds back into the markets, shrinking its own stockpile.

Trump believes that other countries are more adept at managing the money supplies that move in and out of their financial systems, and the interest rates that drive borrowing and bond trading.

‘A small rate cut is not enough, but we will win anyway!’ he tweeted Monday. 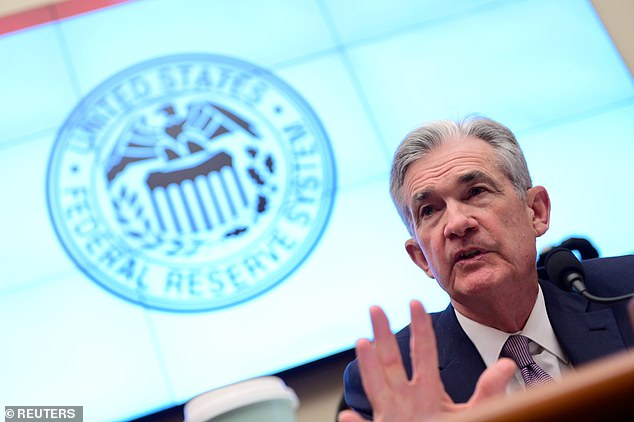 A quarter-point rate cut is almost a done deal, according to economists in a Reuters poll who expect a second cut later in the year.

Expectations in the July 16-24 poll for the first rate cut in more than a decade solidified after several Fed members have strongly hinted policy easing is coming soon, pushing U.S. stocks to new record highs.

He has grown increasingly impatient with Powell, who he believes he can replace at will. Wednesday’s announcement, if the rate cut is not big enough to please Trump, could provide him with a platform to find out.

Any move to oust Powell would likely touch off a legal fight with big repercussions in financial markets.

U.S. stocks were set to open just off record highs on Monday, pausing at the start of a week likely to be dominated by Wednesday’s Fed statement

The S&P 500 and Nasdaq indexes closed at record highs on Friday, as upbeat earnings from Google-parent Alphabet and Starbucks Corp capped a strong week for U.S. retailers and tech companies.