President Donald Trump said Thursday that the U.S. Navy has destroyed a drone controlled by Iran, calling the unmanned vehicle’s approach of an American ship a ‘provocative and hostile’ act.

The conflict came in the Strait of Hormuz, the only shipping lane between the Persian Gulf and the open ocean. About one-fifth of the world’s oil passes through it.

Trump said at the White House that the USS Boxer, a Wasp-class amphibious assault ship, ‘took defensive action’ after the drone strayed to within 1,000 yards.

‘The drone was immediately destroyed,’ he said, after its operators ignored ‘multiple calls to stand down.’ 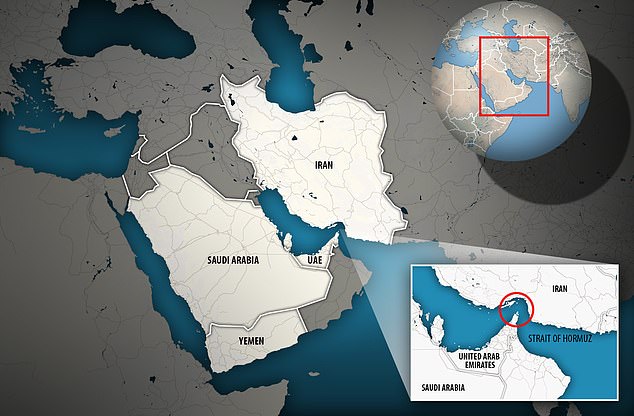 The president called the incident ‘the latest of many provocative and hostile actions by Iran against vessels operating in international waters.’

Iran’s military recently shot down a U.S. drone that it said was flying in Iranian airspace, firing a strike with a surface-to-air missile.

President Trump called off a planned airstrike at the last moment, saying later that retaliating would have killed approximately 150 people on the ground.

An hour earlier he had told reporters at the end of a pohto-op with Dutch Prime Minister Mark Rutte that ‘a big event just happened in Iran. A big event.’

The drone was downed in international waters, according to a Pentagon official.

The increased use of drones by Iran and its allies for surveillance and attacks across the Middle East is raising alarms in Washington, according to a Reuters report this week.

The U.S. believes Iran-linked militias in Iraq have recently increased their surveillance of American troops and bases in the country by using off-the-shelf, commercially available drones.

The disclosure comes at a time of heightened tensions with Iran and underscores the many ways in which Tehran and the forces it backs are increasingly relying on unmanned aerial vehicles (UAVs) in places like Yemen, Syria, the Strait of Hormuz and Iraq.

Beyond surveillance, Iranian drones can drop munitions and even carry out ‘a kamikaze flight where they load it up with explosives and fly it into something’, according to a U.S. official who spoke to Reuters on condition of anonymity.

Iran now flies two or three drones over Gulf waters every day, the U.S. official estimated, making it a core part of Tehran’s effort to monitor the Strait of Hormuz.

The United States and Saudi Arabia have accused Iran of carrying out attacks against six oil tankers near the Strait in the past two months, a claim Tehran has denied.

‘We have seen an uptick in drone activity in Iraq near our bases and facilities,’ the official said. ‘Certainly the drones that we have seen are more of the commercial off-the-shelf variant. So they’re obviously a deniable type UAV-activity in Iraq.’

‘ want to apprise everyone of an incident in the Strait of Hormuz today, involving USS Boxer, a navy amphibious assault ship.

‘The Boxer took defensive action against an Iranian drone, which had closed into a very, very near distance, approximately 1,000 yards, ignoring multiple calls to stand down, and was threatening the safety of the ship and the ship’s crew. The drone was immediately destroyed.

‘This is the latest of many provocative and hostile actions by Iran against vessels operating in international waters. The United States reserves the right to defend our personnel, our facilities and interests, and calls upon all nations to condemn Iran’s attempts to disrupt freedom of navigation and global commerce.

‘I also call on other nations to protect their ships as they go through the strait and to work with us in the future.

‘Thank you very much. I thought you should know that.’

In recent weeks, mortars and rockets have been fired at bases in Iraq where U.S. forces are located but no American troops have been injured.

Iraqi militia groups linked to Iran began using drones in 2014 and 2015 in battles to retake territory from ISIS.

These groups received training on the use of drones from members of Iran’s Revolutionary Guards and Lebanon’s Iranian-backed Hezbollah, according to Iraqi security officials with knowledge of militia activities.

‘Key militia groups have the ability to launch aerial attacks using drones. Will they target American interests? That hasn’t happened yet,’ said one Iraqi security official.

‘They used Katyusha and mortars in very restricted attacks against American interests in Iraq to send a message rather than trying to inflict damage. Using explosive-laden drones is very possible once we have a worsening situation between Tehran and Washington.’

In March, Iran boasted about a complex military exercise involving 50 drones. In a slickly edited video aired on state TV, waves of drones streak across a clear blue sky, bombing buildings on an island in the Gulf.

The show of force was intended to highlight Iran’s locally developed UAV program, which it has been building up for several years.

U.S. forces shot down Iranian-made drones in 2017 in Syria, after deeming them a threat to both U.S.-backed forces and their advisers.