Trump talks tough on trade AGAIN, moving to $200 BILLION of tariffs on China

U.S. President Donald Trump threatened in an interview with Bloomberg News on Thursday to withdraw from the World Trade Organization if ‘they don’t shape up,’ in his latest criticism of the institution.

Such a move could undermine one of the foundations of the modern global trading system, which the United States was instrumental in creating.

‘If they don’t shape up, I would withdraw from the WTO,’ Trump said.

Trump has complained the United States is treated unfairly in global trade and has blamed the WTO for allowing that to happen. He has also warned he could take action against the global body, although he has not specified what form that could take.

He rejected as ‘not good enough’ a European Union proposal scrapping tariffs on automobiles, a move which threatens to amplify a simmering trans-Atlantic trade dispute.

And he told aides he is ready to impose tariffs on $200 billion more in Chinese imports as soon as a public comment period on the plan ends next week, Bloomberg News reported in a story published just before it published an interview with Trump.

The rally in U.S. stocks came to a halt on new concerns that the U.S.-Chinese trade dispute will intensify.

Out: Trump has complained the United States is treated unfairly in global trade and has blamed the WTO for allowing that to happen – now he is threatening to quit

Just hours earlier, the EU Trade Commissioner Cecilia Malmstroem had said the bloc was ‘willing to bring down… our car tariffs to zero’ provided that the United States did the same.

‘Their consumer habits are to buy their cars, not to buy our cars.’

The White House in July sought to defuse the trade tiff when Trump and European Commission President Jean-Claude Juncker met and pledged to work towards a limited trade accord that would eliminate customs duties, but excluded the automobile sector.

Trump on Thursday also compared the EU to China. He has reportedly threatened to slap import taxes on $200 billion in Chinese goods, as a trade war escalates with Beijing.

‘The European Union is almost as bad as China, just smaller,’ Trump said.

And aides told Bloomberg that Trump would move to $200 billion of tariffs as soon as a public consultation was over.

The White House declined comment on the Bloomberg report, which cited six unidentified sources, and was published on the same day as its interview with Trump.

Trump has credited his electoral success to his hard line on trade, which he has argued hurts U.S. workers and favors foreign competitors.

A public comment period on the proposal is set to end on Sept. 6, and Trump plans to impose the tariffs after that deadline, Bloomberg said. 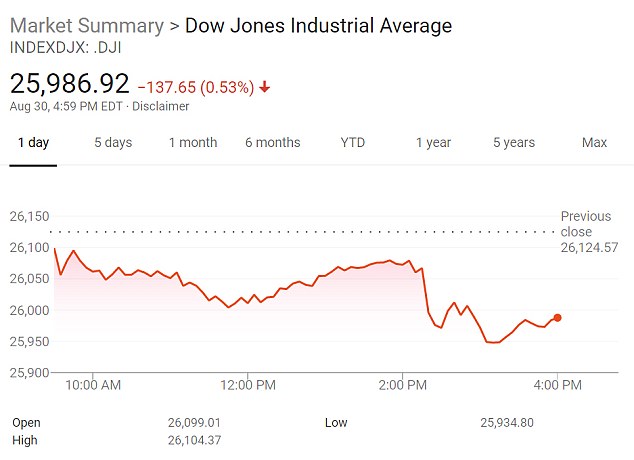 Market fears: The Dow Jones lost 137 points as fears of a trade war accelerated, the first fall of the week. Other key indices including the NASDAQ fell too

Some sources said Trump had not made his final decision, the Bloomberg report said. Trump administration officials have been divided over how hard to push Beijing.

Trump, who has threatened to impose duties on virtually all of the more than $500 billion of Chinese goods exported to the United States each year, told Reuters in an interview earlier this month that resolving the trade war with China would ‘take time’ and that he had ‘no time frame’ for ending it.

His threat to the WTO comes at a time when his protectionist policies have sparked a wave of trade wars, and the institution best placed to help settle trade differences is facing a deepening crisis.

This week Washington blocked the reappointment of a WTO judge, increasing the risk it could soon find itself unable to fulfil its key role in arbitrating disputes.

Stock markets and major government bond yields have risen in recent weeks on hopes that a global trade war could be averted, particularly as leaders of the United States and Canada expressed optimism they could reach a new North American Free Trade Agreement by Friday.

Investor sentiment darkened, however, on the prospect that a new round of U.S. tariffs on Chinese goods may likely take effect in September.