President Donald Trump is prepared to provide a pathway to citizenship for more than 1.8 million illegal immigrants who were brought to the country as children, the White House told aides to Republican members of Congress on Thursday.

That’s more than twice the number of people already protected from deportation by the Obama-era ‘Deferred Action for Childhood Arrivals’ (DACA) program.

The larger concession in the midst of a contentious immigration policy fight would go far further than Obama ever did, extending the nation’s broad arms around nearly everyone who was eligible for DACA status but never applied.

The result, Miller said, is ‘a compromise position that we believe … will get 60 votes in the Senate,’ and ‘ultimately will lead to passage of a law.’

President Donald Trump is set to extend a citizenship path to 1.8 million young illegal immigrants who were brought to the U.S. as children, a dramatic concession on immigration that’s more than twice as generous as Barack Obama’s ‘DACA’ program 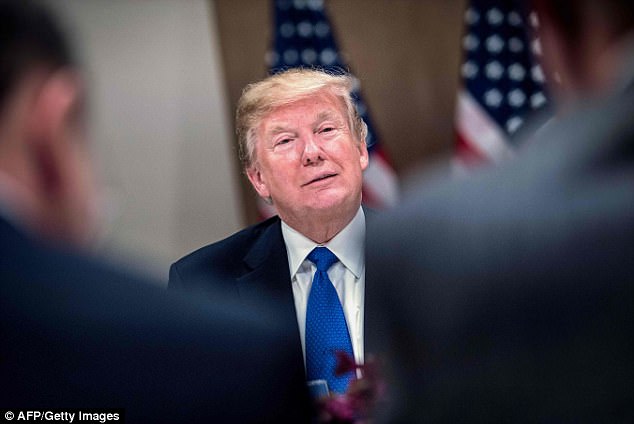 In exchange for welcoming more than 1 million people who qualified for DACA but never applied, Trump aims to squeeze $25 billion out of Congress to build his border wall between the U.S. and Mexico 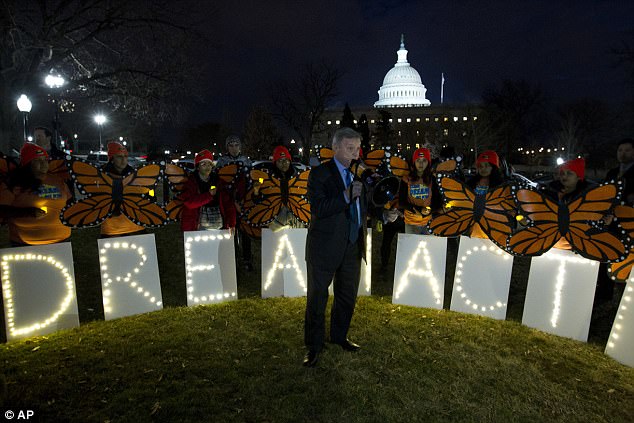 Pro-DACA protesters are a common sight on Capitol Hill, and at the White House, including this group egged on by Illinois Democratic Senator Dick Durbin on Sunday –  but it may be a Republican president who answers their pleas

The conference call was held with the condition that Miller would be identified only as a nameless ‘senior administration official,’ but an NBC reporter and several congressional aides broke that embargo as soon as the call was concluded.

The border wall was among Trump’s most loudly touted and oft-repeated campaign promises.

In keeping with precedent on Capitol Hill, the White House is calling the $25 billion cash infusion a ‘trust fund’ that the Department of Homeland Security could spend on border protection.

Trump’s package would also put an end to a ‘diversity visa lottery’ system that recruits legal immigrants – largely at random – on the sole basis of their countries of origin.

Started in 1999, the program’s intent was to allow people to enter the United States who were from nations typically ‘underrepresented’ among the domestic population. 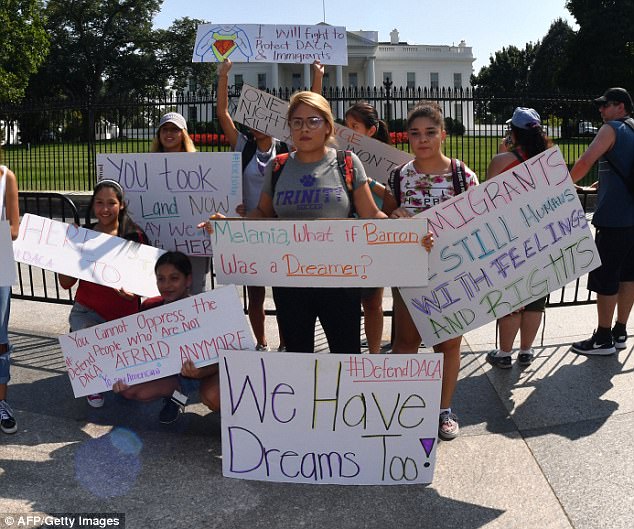 The expanded citizenship allowance for so-called ‘DREAMers’ matches exactly a plank in a comprehensive reform proposal promoted by a ‘Gang of Six’ senators, led by Republicans Lindsey Graham and Jeff Flake, and Democrt Dick Durbin.

White House press secretary Sarah Sanders said Wednesday that their overall package was unacceptable to the president and should be considered ‘dead on arrival.’

Trump leapt back into the immigration debate Wednesady afternoon before jetting off to the World economic Forum in Davos Switzerland, telling reporters in an impromptu meeting that he would support citizenship for DACA recipients ‘over a period of 10 to 12 years.’

Miller on Thursday told congressional aides that this represented ‘the most substantial concession’ the White House would offer to Democrats.

‘The president has indicated a willingness to extend citizenship to 1.8 million individuals as part of this immigration reform package,’ he said.

‘That would be the DACA population, plus individuals who failed to apply for DACA but otherwise met the requirements, as well as adjustments in time-frame that would bring the total maximum population size to 1.8 million.’

The White House expects to publicly unveil its proposal on Monday, a day before Trump delivers his first State of the Union Address.

A White House aide told DailyMail.com on Thursday that funding for Trump’s wall is non-negotiable.

‘You’ve been covering him long enough,’ the aide said . ‘You know he’s not about to bend on the wall. And that’s going to take a multi-year appropriation from Congress.’ 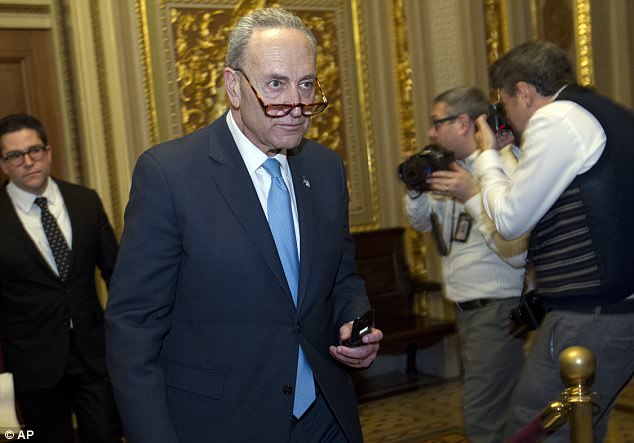 BALL IN YOUR COURT: Senate Minority Leader Chuck Schumer says he offered Trump his $25 billion last week before the government shutdown as an inducement to make DACA permanent, but now Trump has made him a counter offer that’s far more ambitious 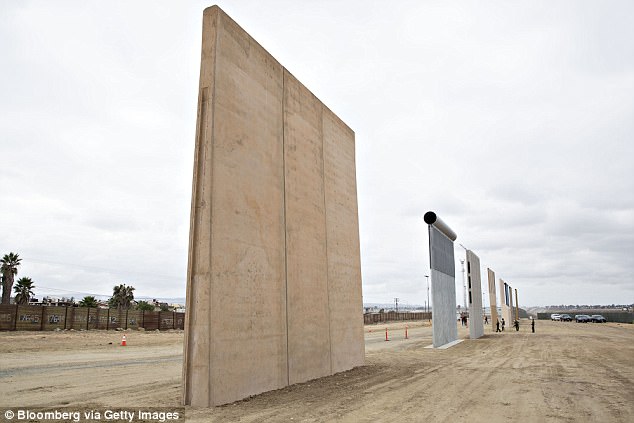 Prototype U.S.-Mexico border walls were erected in San Diego, California last October, ready for evaluation and funding – if Trump can wheedle the money out of Congress 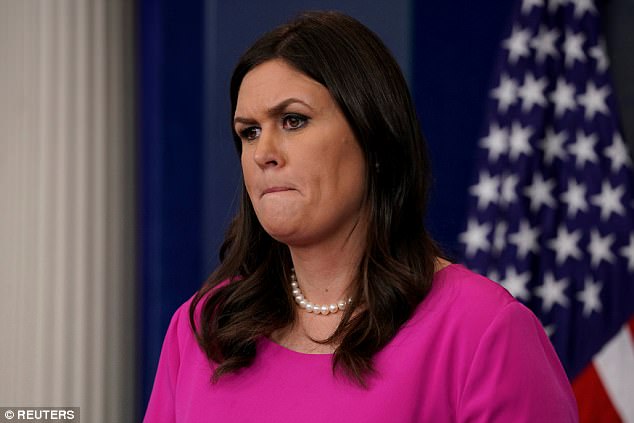 White House Press Secretary Sarah Sanders this week told people brought to the U.S. as minors – the illegal immigrants protected by DACA – that ‘they should storm Capitol Hill and protest there’ in order to force lawmakers to embrace a compromise that would help them

One aide familiar with Trump’s thinking said Wednesday DACA recipients put into a citizenship queue would be vetted along the line of the requirement of a ‘conservative DREAM Act’ proposed last September by North Carolina Sen. Thom Tillis and other Republicans.

A rigorous background check would be mandatory, including biometric data and criminal database searches. Citizens-to-be under the proposal would also have to pay off any federal tax liabilities they have, and acknowledge that their immigration status can be terminated if they were convicted of a crime while they were protected by DACA.

The Tillis bill mentioned by the aide also called for a renewed background check at the five-year mark, and then another one when citizenship papers are finally submitted.

Other requirements would likely include earning a high school diploma, and then maintaining their ‘conditional’ status – and a green card – by either holding down a steady job, serving in the military, or graduating from college.

On Monday, White House Press Secretary Sarah Sanders urged people brought to the U.S. as minors – the illegal immigrants protected by DACA – to ‘storm Capitol Hill and protest there’ in order to force lawmakers to embrace a compromise that would help them.