TSB closed some of its branches early over the weekend

TSB closed some of its branches early over the weekend and turned off the lights to avoid having to deal with irate customers, it has been claimed.

Some savers, who had been unable to access accounts online for days, were sent to branches up to 65 miles away.

A banking union leader said employees were so overwhelmed they resorted to switching off the lights to deter furious account holders.

TSB closed some of its branches early over the weekend and turned off the lights to avoid having to deal with irate customers, it has been claimed

Half of its customers were still locked out of their online accounts last night – ten days after the bank began an ill-fated systems upgrade.

Many of the 1.9million customers affected have been unable to make bank transfer payments, meaning vital bills have gone unpaid.

TSB’s problems stem from a failed switch-over from the IT system of its old owner Lloyds Banking Group to one owned by its Spanish parent company Sabadell.

The bank provoked more fury as branches closed early on Saturday – the first day many workers were able to visit a branch since problems started.

Branches in Hull, Lincoln, Clifton in Nottingham, Greenock, Falkirk and Elgin in Scotland were reported to have shut early.

TSB in Hull closed at 1pm on Saturday when it usually shuts at 4pm.

The branch then directed customers to its nearest branches 46 miles away in Doncaster or Retford in Nottinghamshire, which is 65 miles away. 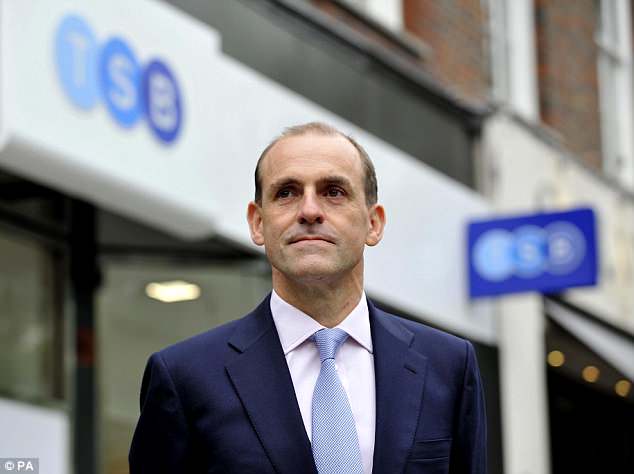 Carl Douglas wrote on Twitter that his local TSB in Lincoln had closed at 1pm instead of at 5pm on Saturday.

He said: ‘After the week of TSB meltdown the last thing I wanted to see when I headed into my Lincoln branch was that it had closed early at 1pm… no warning on the website. Thanks for the wasted fuel and time.’

Mark Brown, general secretary of the banking union TBU, said: ‘I’ve heard of some branches where managers have said they will turn off the lights to stop people coming in.’

A TSB spokesman said: ‘Our branches are open as normal, however please be aware that they are currently busier than usual.

‘At a local level, we may adjust the opening hours of a particular branch as required.’

The spokesman said lights were turned off when branches closed early to customers.