Twitter has erupted with users’ tales of their battles with tinnitus after Susanna Reid revealed she was having a ‘bad day’ with the hearing condition.

The Good Morning Britain co-anchor, 47, took to Twitter on Monday to tell her 540,000 followers the constant ringing in her ears was ‘so loud’.

The tweet, which has been liked more than 2,400 times, prompted 1,200 responses from others who shared their heartbreaking ordeals with the disorder.

One claimed he was born and will ‘die with tinnitus’, adding he has ‘never known silence’ in the 52 years he has been alive.

Another added the constant ringing, hissing and buzzing noises nearly drove him to suicide. 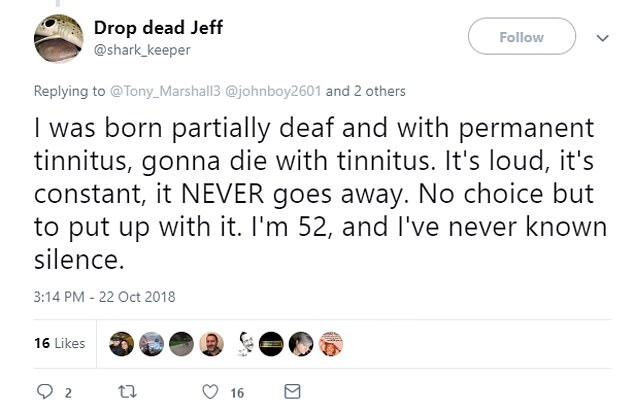 In response to her tweet, which has been liked more than 2,400 times, other users took to the social-media platform to share their ordeals with the condition. One claimed he was born with ‘permanent tinnitus’ and will die with it, having ‘never known silence’ at 52 years old

Another responded saying he was ‘driven insane’ by the constant white noise he heard without any outside source. He even admitted to being close to the point of suicide. With time, however, the tweeter claimed his brain has learnt to block out much of the incessant buzzing

One twitter user responded to Susanna’s tweet saying he suffered from ‘raging’ tinnitus 24 hours days, adding ‘sleep is something I remember enjoying…once’.

Another claimed she has been ‘driven insane’ after battling the condition for 35 years.

‘I would give anything for peace and quiet,’ she added.

And another said she has been driven ‘crazy’ by the disorder which ‘haunts her day and night’.

One even said his mental health is affected during tinnitus flare ups.

But others had words of encouragement.

Although one Twitter user described being diagnosed with tinnitus as a ‘nightmare’ and ‘hell’, they added they soon got used to it and are no longer ’emotionally affected’.

One tweeter, whose tinnitus manifests as a hissing noise, said it felt like a ‘nightmare’ when first diagnosed and ‘scared the hell out of them’. They added it now does not bother them

In a tweet following her appearance on Good Morning Britain on Monday, Susanna described hearing a ‘loud’ sound similar to a high-pitched continuous beeping.

The mother-of-three wrote: ‘My tinnitus is so loud right now. The noise you used to hear when TV programming finished at the end of the day? That. In my head.’

The broadcaster was diagnosed with tinnitus more than a decade ago after the birth of her second son Finn, now 13.

She has blamed ‘a difficult labour’ for the onset of her condition.

The co-anchor then took to social media on Tuesday to reassure fans she was feeling much better after a tough 24 hours.

‘Thank you lovely people. Yesterday was a bad tinnitus day, but I can deal with it mostly,’ she wrote.

‘If anyone out there needs support please contact @BritishTinnitus who have lots of good advice.’ 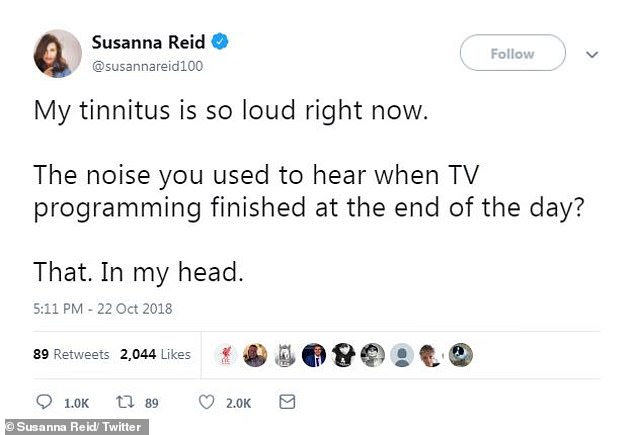 ‘So loud right now’: The Good Morning Britain co-anchor, 47, took to Twitter on Monday to tell her followers the constant ringing in her ears, which characterises the affliction, was ‘so loud’ 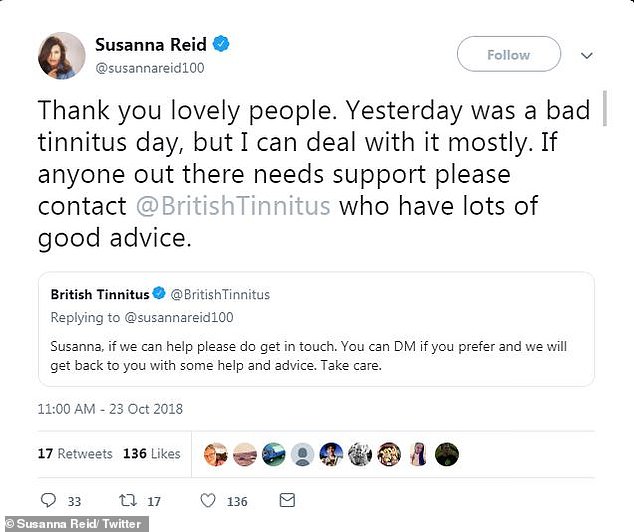 ‘A bad day’: The broadcaster then went back to the social media platform on Tuesday to reassure fans she was feeling much better after a tough 24 hours

Back in 2015, Susanna spoke about her tinnitus on GMB, saying: ‘When I first started hearing it, which was probably about 10 years ago, I became quite distressed that I would never hear silence again.’

Tinnitus is the name for hearing noises, such as ringing, buzzing or hissing, that are not caused by an outside source, according to the NHS.

It occurs due to damage to the cochlear hair cells in the inner ear, which stretch and contract in accordance with sound-induced vibrations.

Very loud noises – at a nightclub or played over headphones – can overload these cells, leaving them temporarily or permanently damages.

The damage forces other parts of the ear to overwork to compensate for the loss of function, which leads to tinnitus and eventually chronic hearing loss.

Some 15 per cent of adults in the UK suffer from tinnitus, according to figures.

Treatment focuses on counselling and therapies to help people find ways of coping with their condition and reducing any anxiety it causes.

Tinnitus retraining therapy uses sound therapy to retrain the brain to tune out and be less aware of ringing and buzzing noises.

In 2013, Susanna was asked what was her ‘treasured item you lost and wish you could have again’.

To which she replied: ‘Silence. I’ve had tinnitus since Finn’s birth, which probably resulted from a difficult labour.’

The journalist raises son Finn, as well as Sam, 15, and Jack, 12, with her former partner of 16 years, Dominic Cotton.

Other celebrities who have spoken about living with tinnitus include The Voice UK coach and Black Eyed Peas star Will.i.am.

He said: ‘There’s always a beep there every day, all day. I can’t be quiet as that’s when I notice the ringing in my ears.’

Rugby player Ben Cohen also struggles with the condition due to hearing loss.

‘I’ve suffered from tinnitus all my life and constantly have a screaming noise in my ears,’ he said last April.

‘I’d love to experience peace and quiet, or listen to the birds singing, but I only have 46 per cent hearing.’

Tinnitus causes sufferers to hear noises such as ringing, buzzing or hissing without an outside source. There is no cure.

The British Tinnitus Association states: ‘It is not a disease or illness; it is a symptom generated within the auditory system and usually caused by an underlying condition.

‘The noise may be in one or both ears, or it may feel like it is in the head. It is difficult to pinpoint its exact location.

‘It may be low, medium or high pitched and can be heard as a single noise or as multiple components.’ 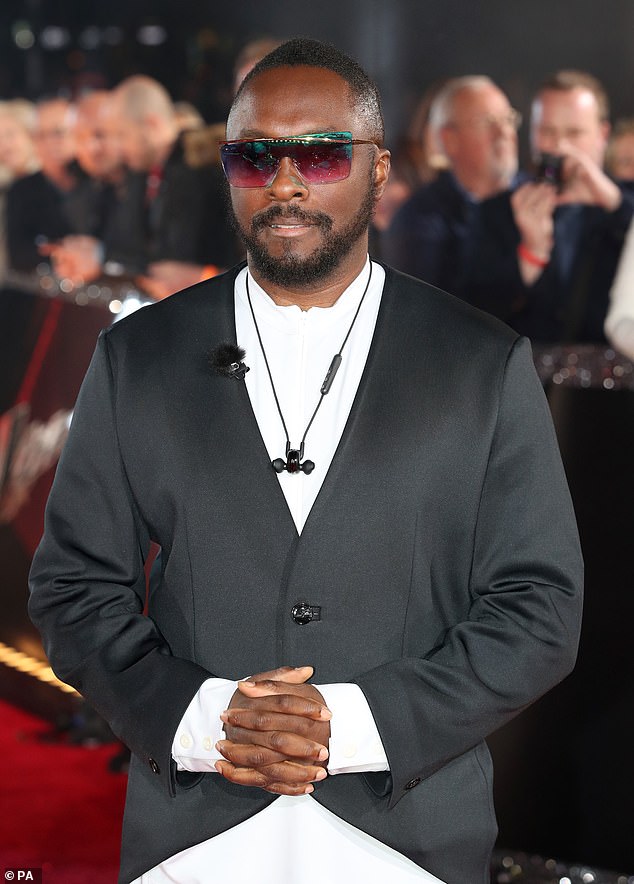 Struggling: Black Eyed Peas star and The Voice UK coach Will.i.am has spoken about his battle with tinnitus in the past, describing it as ‘a ringing in my ears’ (pictured last week)