Two new cases in Queensland as part of school cluster

Both of the cases are linked to the St Thomas More College cluster at Sunnybank.

‘We aren’t concerned about the two new local community cases because they are students from Sir Thomas More, linked to the Sunnybank cluster but been in their home isolation,’ Premier Annastacia Palaszczuk said.

Ms Palaszczuk thanked the 1,000 people in families associated with the school for going into 14 days isolation.

‘We saw how well it worked in the Indooroopilly cluster when everyone did the right thing,’ she said.

‘We are seeing a few cases pop up from that cluster but they are in their home quarantine.’

‘We saw how well it worked in the Indooroopilly cluster when everyone did the right thing,’ Queensland Premier Annastacia Palaszczuk said of the 1,000 people who went into quarantine as a result of a positive case at St Thomas More College, Sunnybank in Brisbane 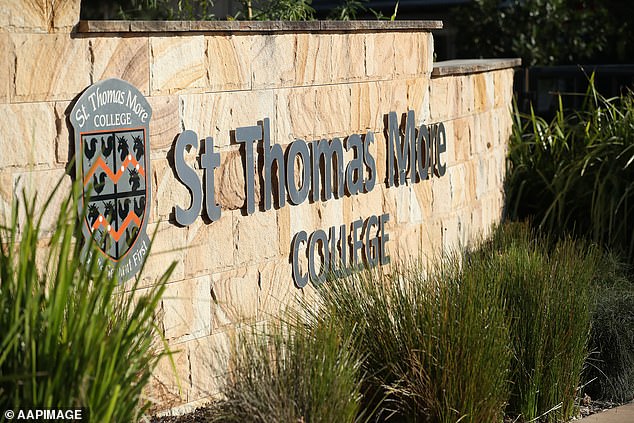 Two new cases announced in Queensland on Monday were linked to the St Thomas More College cluster at Sunnybank, Brisbane

Dr Young said concerns remained in relation to exposure sites in the Logan and south Brisbane areas after a number of truck drivers were infectious in the community in those areas.

‘We still have some concerns about the numbers of freight drivers who been infectious in our community,’ she said.

‘There are quite a list of exposure venues that I would really like anyone who lives in Brisbane or Logan to really have a look at, and ensure you have been to any of those exposure venues at those times.’

It was revealed yesterday the school cluster was likely caused by a man who crossed into Queensland from NSW on an essential worker pass, infecting a man who lives at Moorooka in south Brisbane.

He then passed the virus onto his children and their mother, including the college student. 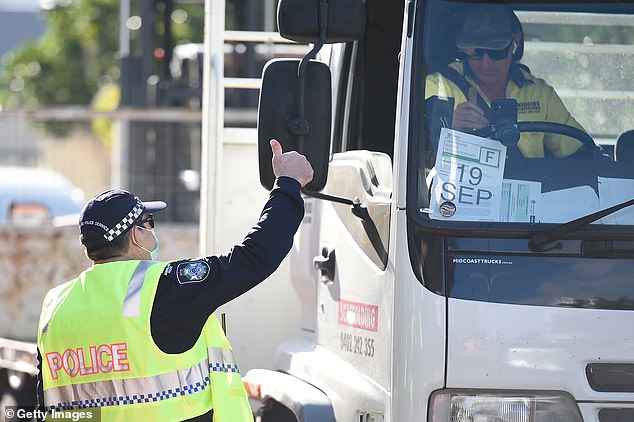 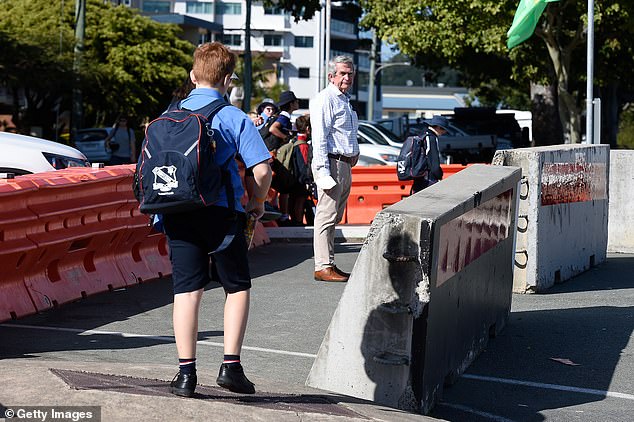 A student who is resident in Queensland crosses into NSW to attend school at Coolangatta-Tweed Heads after the border bubble was reinstated, with students, essential workers and certain other categories allowed to cross back and forth from today

Queensland Police Deputy Commissioner Steve Gollschewski said an investigation was currently underway to check that the essential workers had the correct border passes and met all other exemptions to come into the state.

‘Were investigating the circumstances but it will take us a little while to do that,’ he said.

He said a number of people seeking to enter Queensland as essential workers had been turned around at the border because they had not had one dose of a Covid vaccine, which Queensland mandated from August 20.

‘We’re happy with how that’s going at the moment… a lot more people will be able to come into Queensland and vice versa as long as they’ve had their vaccine, and schools can go back as well,’ she said.

As of today, people will be allowed to travel across the border for school, for work that cannot be done from home, essential shopping, health care or to care for someone who is vulnerable, provided they have the correct border pass and one dose of a Covid vaccine.