British adults spend 24 hours each week glued to the internet – double the amount of time they did a decade ago, research reveals.

The figure was even higher among those aged 16 to 24, who spent 34 hours of their week on the web.

Smartphones are the most popular device for surfing the web, meaning we are more connected than ever before – not just using the internet at home or work.

Ofcom’s Adults Media Use and Attitudes report said: ‘Whereas in previous years being without internet access would have been an irritating inconvenience, some would now consider it a threat to their livelihood.’

As reliance on the net increases ‘people need the skills to question and make judgements about their online environment’, Ofcom warned.

It added: ‘These skills are important as they enable them to keep themselves and others safe, to understand when they are being advertised to and how their data is being used, and to know when something could be biased or misleading.

‘Our research shows that many people struggle with at least some of these elements.’

Ten per cent of respondents said they did not question what they saw online and 23 per cent of social media users would not bother checking if something they read on sites such as Twitter or Facebook was trustworthy. Social media popularity is booming among those looking for an ‘alternative viewpoint’ on news.

Asked where they would go if looking for a different take on traditional news, 25 per cent said they would consult sites such as Twitter and Facebook.

Half of users are concerned about what is on the web and 27 per cent have specific fears about what it might be doing to society with the same number revealing they had seen ‘hateful content’ online in the past year. 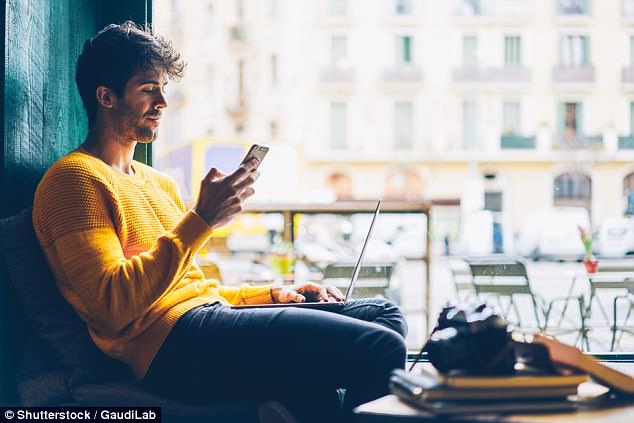 Most people said the benefits of the internet outweighed its risk, the Ofcom report found

Many also admitted they had been upset or offended by posts they had come across on social media, with 55 per cent saying this had happened – compared to 44 per cent in 2016.

However, just one in eight said they had reported inappropriate content to YouTube and three in ten inaccurately believed that it was regulated by the Government.

A majority of those questioned – 62 per cent – said the benefits of the internet outweighed the risks.

The report also revealed the vast difference between age groups in attitudes towards phones. When asked what device they could not live without, 74 per cent of those aged 16 to 24 said their mobile phone and just 7 per cent said their television.

For those aged over 75, only 9 per cent favoured their phone, while 69 per cent rated their TV as most important.