Britain has approved a rapid coronavirus test that gives a result in just 20 seconds, it was revealed today.

UK start-up iAbra said the Virolens test was given approval by the country’s medical regulator after it was trialled at Heathrow Airport.

The company hopes to roll it out more widely in the coming months as the UK comes out of lockdown, specifically at airports, sports venues and work places.

The test involves a saliva swab of the inner-cheeks, unlike the more commonly used nose and tonsil swabs, which can be uncomfortable.

Swabs are inserted into a cartridge that goes into the coffee machine-sized Virolens device, which scours the sample for Covid. Inside the machine is a digital camera attached to a microscope that examines the sample and runs it through a computer programmed to spot the virus.

Users take their own sample and only one trained person is needed to operate the machine. Each screening device is capable of carrying out hundreds of tests per day.

Histate, the company distributing the test, claims it is one of the most accurate rapid kits on the market, spotting 98 per cent of Covid-positive people.

Britain has approved a rapid coronavirus test that gives a result in just 20 seconds, made by UK start-up iAbra 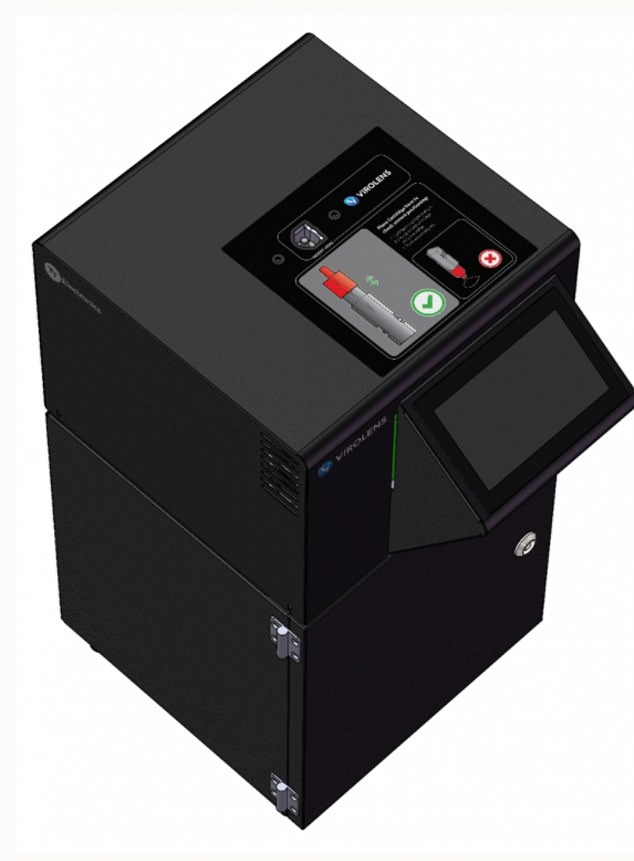 The test was trialled at Heathrow and its performance was compared to the gold-standard PCR tests, which can take several days to produce results.

MailOnline has contacted the UK Medicines and Healthcare products Regulatory Agency for comment.

WHAT DID TRIALS AT HEATHROW SHOW

Data from the Heathrow trials have still not been published.

The Heathrow study is believed to have been conducted over a three-week period in the winter at the airport’s Terminals 2 and 5.

Passengers who agreed were screened using the rapid test, as well as a PCR swab, to compare effectiveness.

The study came on the back of the Government’s ‘Test to Release’ initiative, which from December 15, which gave passengers the option to reduce their quarantine period from 14 days to five, provided they tested negative for the virus.

It’s thought that at least 400 people were tested during the trial.

Histate director Joss Bassett told City AM: ‘British designed and built, this new test shows that the UK can continue to play a major part in the global fight against Covid-19 and help to get the world moving again.

‘The speed of the test, alongside the vaccine rollout, brings a return to normality within tangible reach, making the reopening of the economy and tourism safer for everyone.’

The device is manufactured in Hartlepool, in the North East, by a listed UK company, TT Electronics, which is valued at £439million.

Boris Johnson has put rapid coronavirus testing at the heart of his lockdown-easing plans, with hundreds of thousands already administered every day in schools. They are also deployed in care homes, hospitals, and across businesses.

They are viewed as a way of getting more employees back to work and punters back at live sporting events.

It comes as all lorry drivers entering England face compulsory Covid-19 tests to fight the threat of new coronavirus variants – despite fears the scheme could disrupt food supplies.

Hauliers, border force officials and other workers have been exempt from testing when entering the UK, but Whitehall is set to announce a change this weekend.

Those arriving will have to take a customised test once they are in Britain, rather than at the borders, to avoid  delays that could lead to empty shelves in supermarkets and shops.

Despite concerns over delays, Boris Johnson said on Wednesday that the Government ‘can’t rule out tougher measures’.

A Government source told The Telegraph: ‘The potential impact is hard to quantify but there is a concern that an inbound testing regime will introduce an additional burden that could cause significant points of friction.’

Those staying longer than two days will have to have a test within 48 hours of arriving and then every 72 hours, with fines similar to the £2,000 penalties for travellers who fail to test during home quarantine.

Border Force staff engaged in cross Channel work and similar arrangements for those working on trains and ferries in the area will have to take three mandatory tests a week.

Concerns are growing about the spread of the South African and Brazilian variants of coronavirus, with Home Affairs Committee chairwoman Yvette Cooper on Wednesday asking why hauliers coming from France were not being tested given the country has up to 3,000 cases of the two strains.

Speaking on the same day, Mr Johnson admitted he was considering tougher restrictions for France, telling the Liaison Committee of senior MPs that ‘we have to look at the situation at the Channel’ and ‘we can’t rule out tougher measures and we will put them in if necessary’.

When France required the testing of hauliers crossing the Channel in December it led to thousands of lorries being stranded in Kent while the arrangements were put in place.

Three months on from the delays, France this week lifted its requirement for lorry drivers arriving from Britain to present a negative Covid test.