A deluge hit the south east before midnight with showers or longer spells of rain promised for Wales and central and southern England throwing barbecue plans into chaos.

Scotland and Northern Ireland will escape the worst of the bad weather, however temperatures are still expected to reach 77F in the south east.

At least 17million journeys are expected to be taken over the long weekend but plans to enjoy outdoor barbecues could be hit by potential thunderstorms, heavy rain and even flooding in parts of southern England. 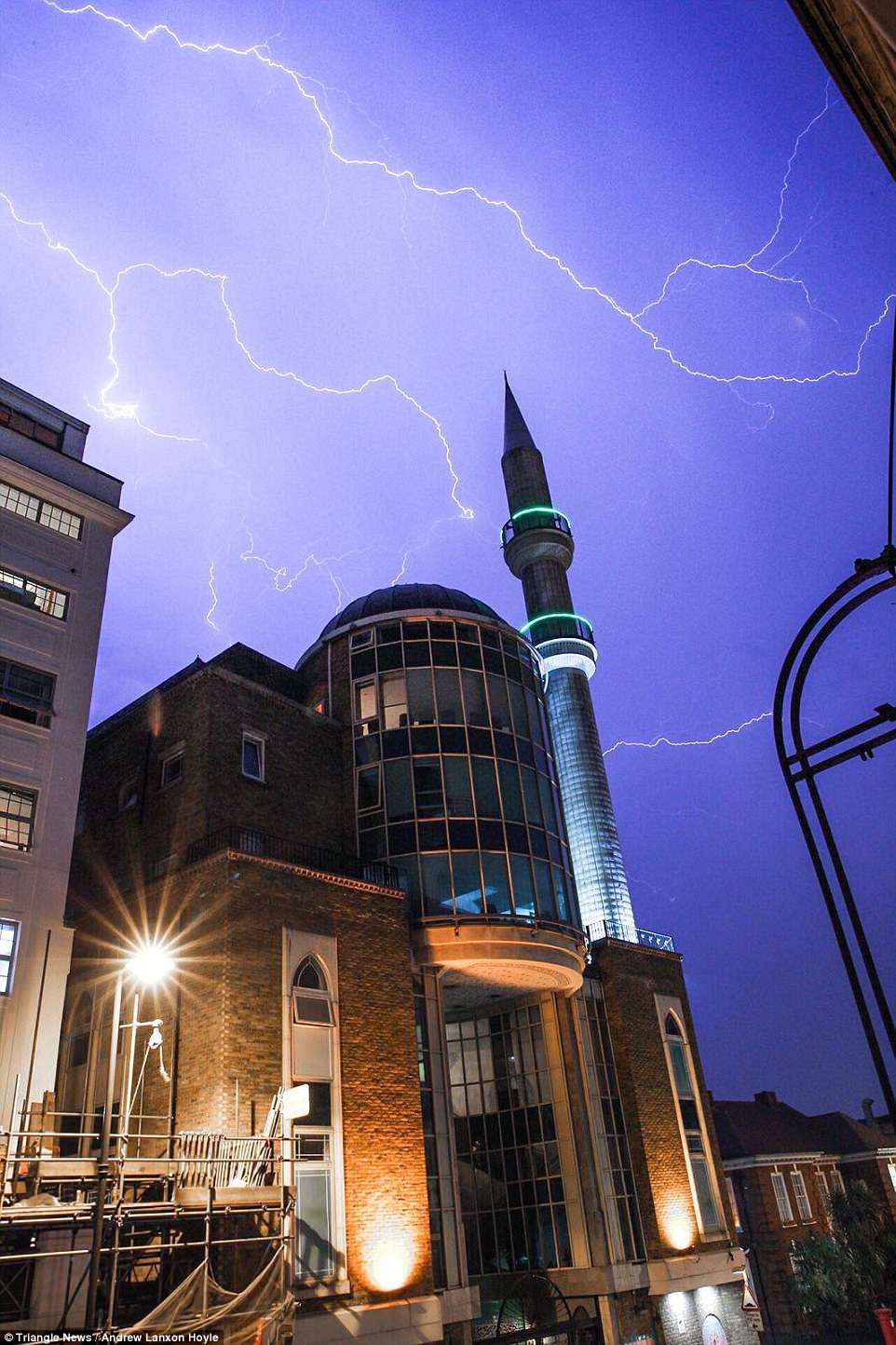 In Portsmouth, the lightening lit up the sky above the Solent as several ships made their way out to sea 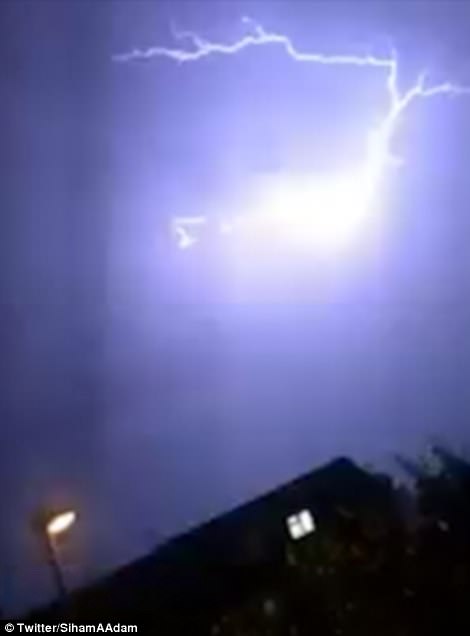 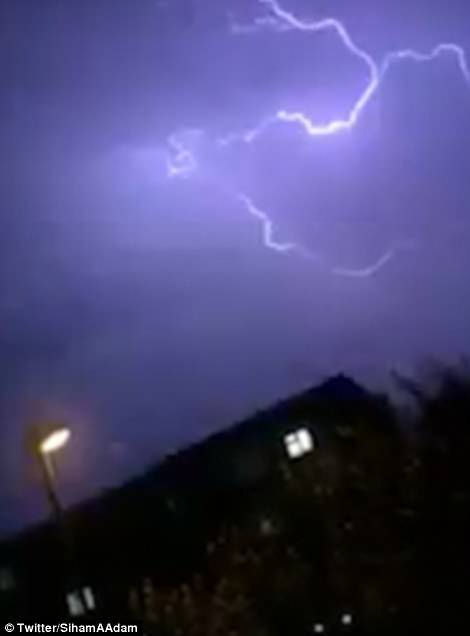 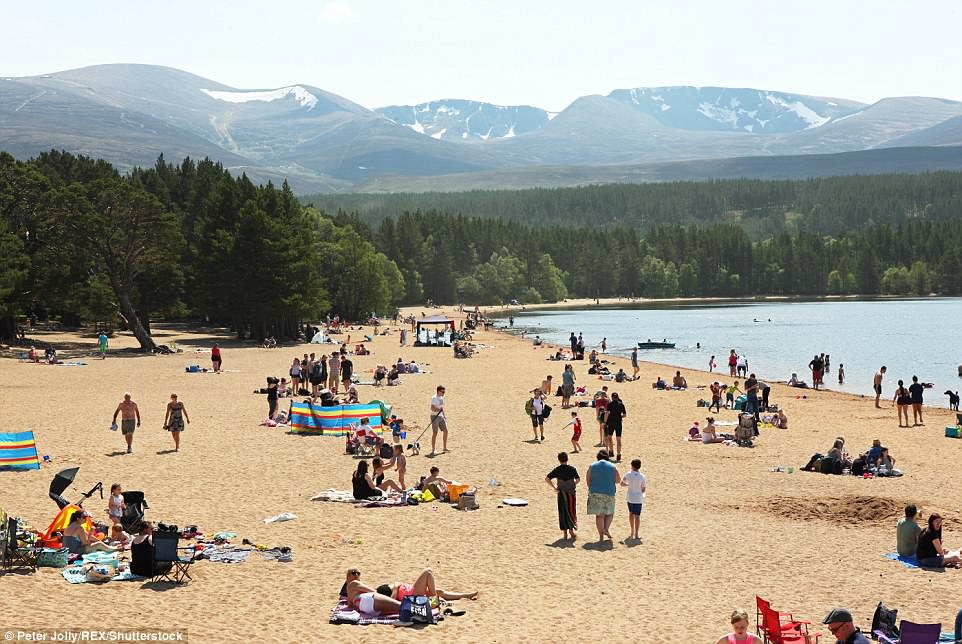 The beach at Loch Morlich near Aviemore which was one of the hottest places in Scotland today. The snow is still lying in places on the Cairngorm Mountains behind 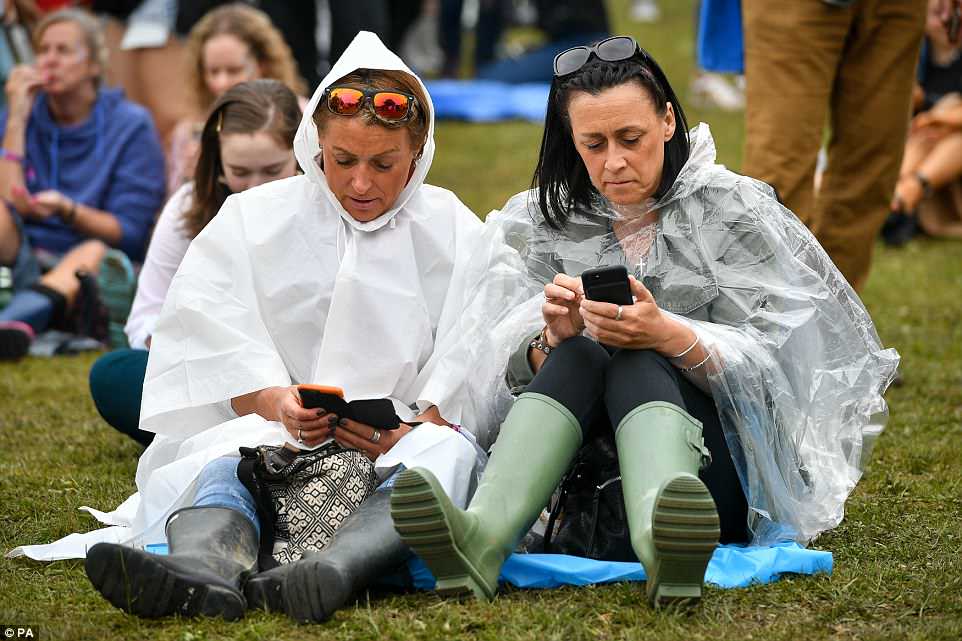 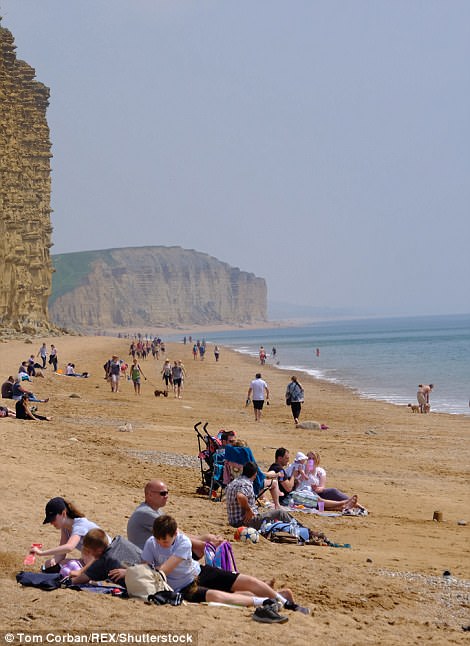 It will still be a ‘warm to very warm’ bank holiday weekend for most and hopes that temperatures could tip 30C (86F) are now ‘not impossible but less likely’, according to Met Office forecaster Bonnie Diamond. Pictured: West Bay beach 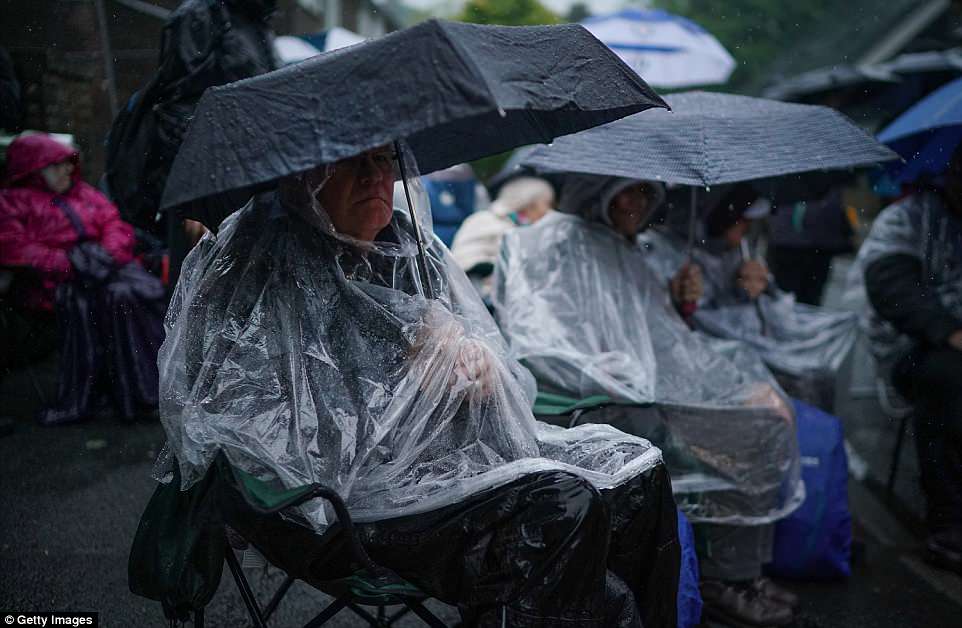 The stormy weather from yesterday will continue across the long weekend. Pictured: Brass Band enthusiasts brave the rain as they listen to bands play in the village of Delph during the Whit Friday brass band competition on May 25, 2018 in Oldham

The Met Office has issued a yellow rain warning for the South today between 6am and 12am amid concerns that the conditions will put a dampener on the weekend.

But anyone in Scotland, which will see ‘the best of the sunshine’, could enjoy hot temperatures this bank holiday without the threat of thunderstorms. The competition, which was first recorded in 1884, sees each band perform two pieces; one whilst marching (pictured) and then a show-piece to an adjudicator, who sits in a room or caravan hidden so that the judge cannot see who is playing The Met office reports that there is a small chance that homes and businesses could be flooded quickly, with damage to some buildings from floodwater, lightning strikes, hail or strong winds.

Train or bus services could face delays, while spray and flooding could lead to difficult driving conditions and road closures.

Forecasters also warned that flooding or lightning strikes could also bring power cuts and loss of other services, with thunderstorms this afternoon possibly bringing up to 1.2in (30mm) of rain.

Four flood alerts have been put in place for the the Midlands and the Southeast across the long weekend. A Met Office spokesman added: ‘Very warm and humid conditions will lead to thunderstorms developing across parts of Southern England, the South and West Midlands and Wales on both Saturday and Sunday.’

‘Thunderstorms will produce torrential rain and hail in places with up to 30mm (1.2in), while some places may miss the worst of the heavy rain.

‘A north-south split will see Scotland and Northern Ireland get the best of the weather while England and Wales suffer problematic weather with sunshine but heavy showers and thunderstorms.

‘The west of Scotland will see some of the best of the sunshine this weekend.

‘The greatest risk of intense thunderstorms is in the southwest which will then breakout more  widely to the rest of England and Wales tomorrow.

‘It’s going to be a hot three days but not a record breaker by the looks of things.’ 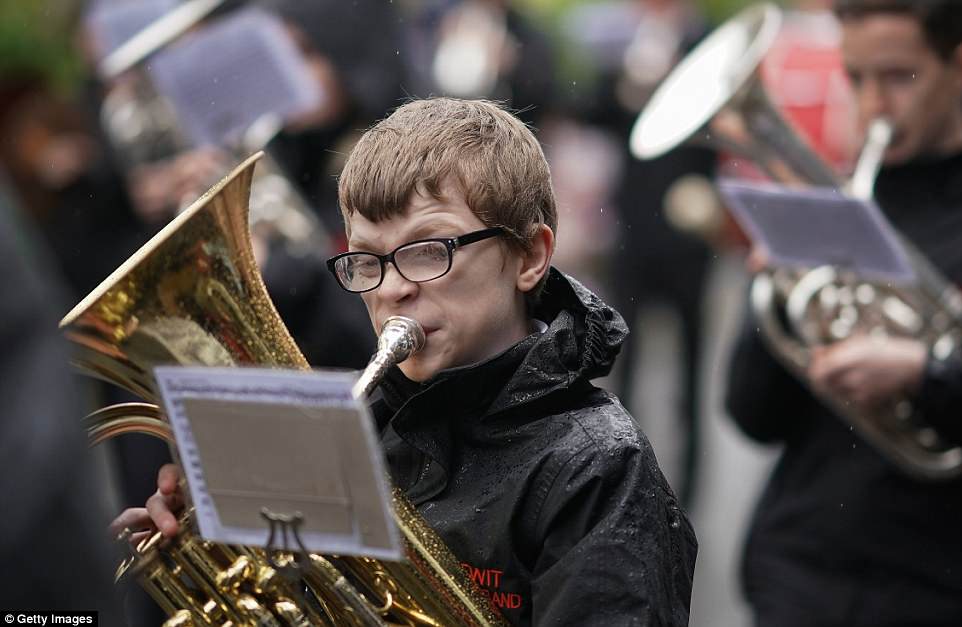 There are rain warning out for the south of England across the next two days. Pictured: The ‘Saddleworth Whit Friday Brass Band Contests’ attracts up to 100 brass bands from all over the UK and Europe to compete 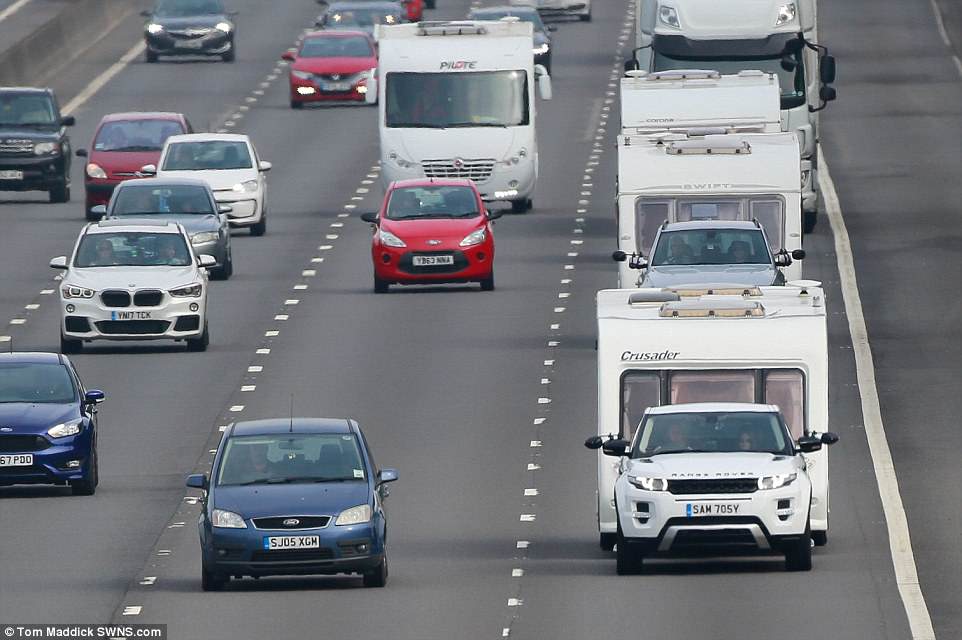 Masses of caravans travel South down the M1 near Nottingham, for the start of the Bank Holiday Weekend A Met Office spokesman said: ‘Very warm and humid conditions will lead to thunderstorms developing across parts of Southern England, the South and West Midlands and Wales on both Saturday and Sunday’ At least 17million journeys are expected to be taken over the long weekend but plans to enjoy outdoor barbecues could be hit by potential thunderstorms, heavy rain and even flooding in parts of southern England

Northern Ireland might see some thunderstorms but still enjoy rays of sunshine throughout their long bank holiday weekend.

Heavy downpours will occur across the south of England and around Wales with some communities warned of flooding problems.

Monday will see less chance of thunderstorms and rain – with temperatures expected to reach 86F (30C).