Dramatic drone footage has captured images of an unknown and uncontacted Indian tribe living deep in the Brazilian jungle for the first time.

The video was shot from high above a vast area of dense Amazon rainforest in the far west of northern Brazil.

The images show a group of 16 indigenous people from a tribe which, according to the Brazilian agency for native tribes, Funai, has never had any contact with the outside world.

In a clearing in the forest, the drone filmed a tribesman walking with a bow and arrow, an ancestral long house known as a maloca, and a plantation of what is believed to be manioc.

Other members of the tribe can be seen walking through the jungle near the clearing.

The name or ethnicity of the tribe is unknown as the group has never been seen before and no contact has ever been made, according to Funai. 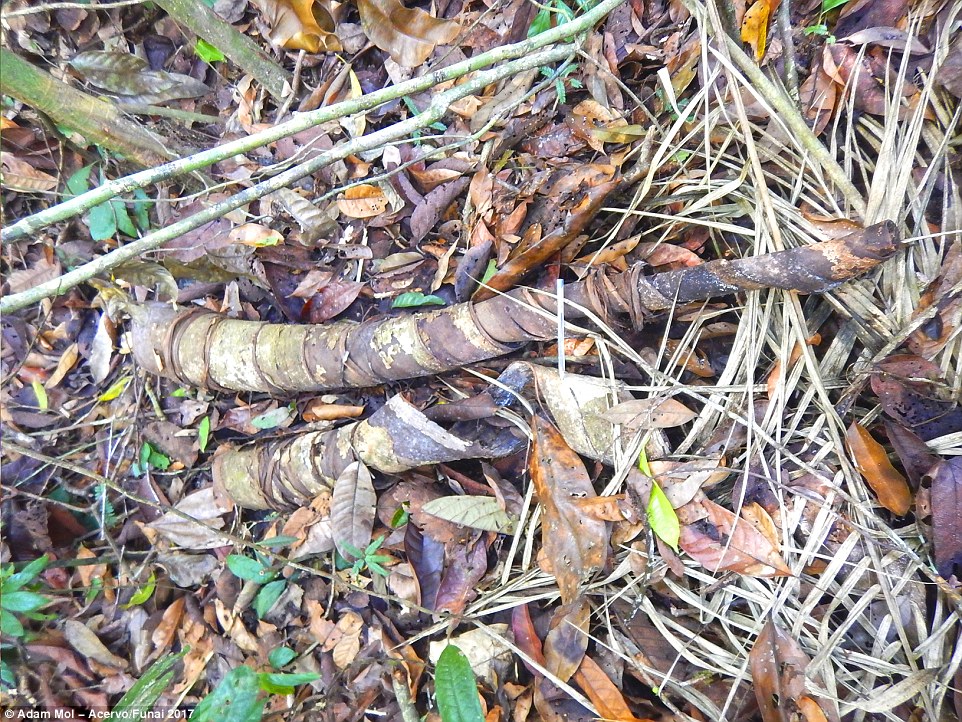 These images were taken in 2017 during one of the expeditions of the project ‘Monitoring the Presence of Isolated Indians in Juruazinho River’. This is a picture of a horn made from tree bark used by the uncontacted tribe

The agency, which released the footage today, said its experts trekked more than 190 miles into the 53,000-square-mile Vale do Javari Indian reservation on the border with Colombia and Peru, after receiving reports that illegal hunters were threatening tribes.

The three-week expedition last year included travelling 112 miles along rivers before taking to motorbikes then walking for 75 miles through dense jungle.

The group also found items which confirmed of the presence of uncontacted tribes in the region, including an abandoned stone axe tied together with vegetable fibre, a horn made from tree bark and dugout canoes.

The region, in the Brazilian state of Amazonas, is known to be occupied by six tribes which have been contacted. 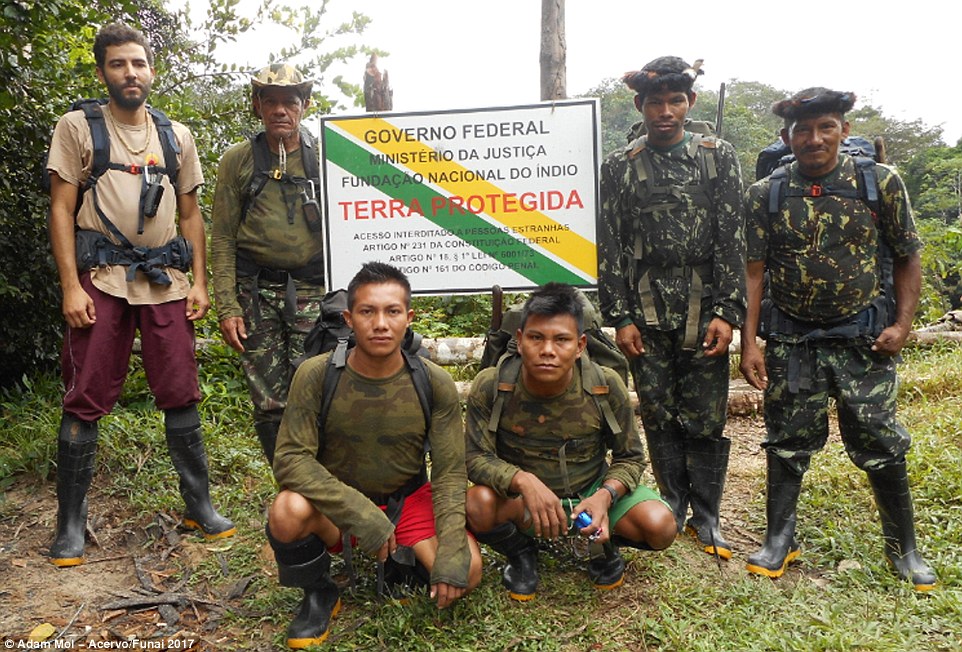 The sign behind a Funai expedition team reads ‘PROTECTED LAND’, they found evidence of illegal hunters in the region 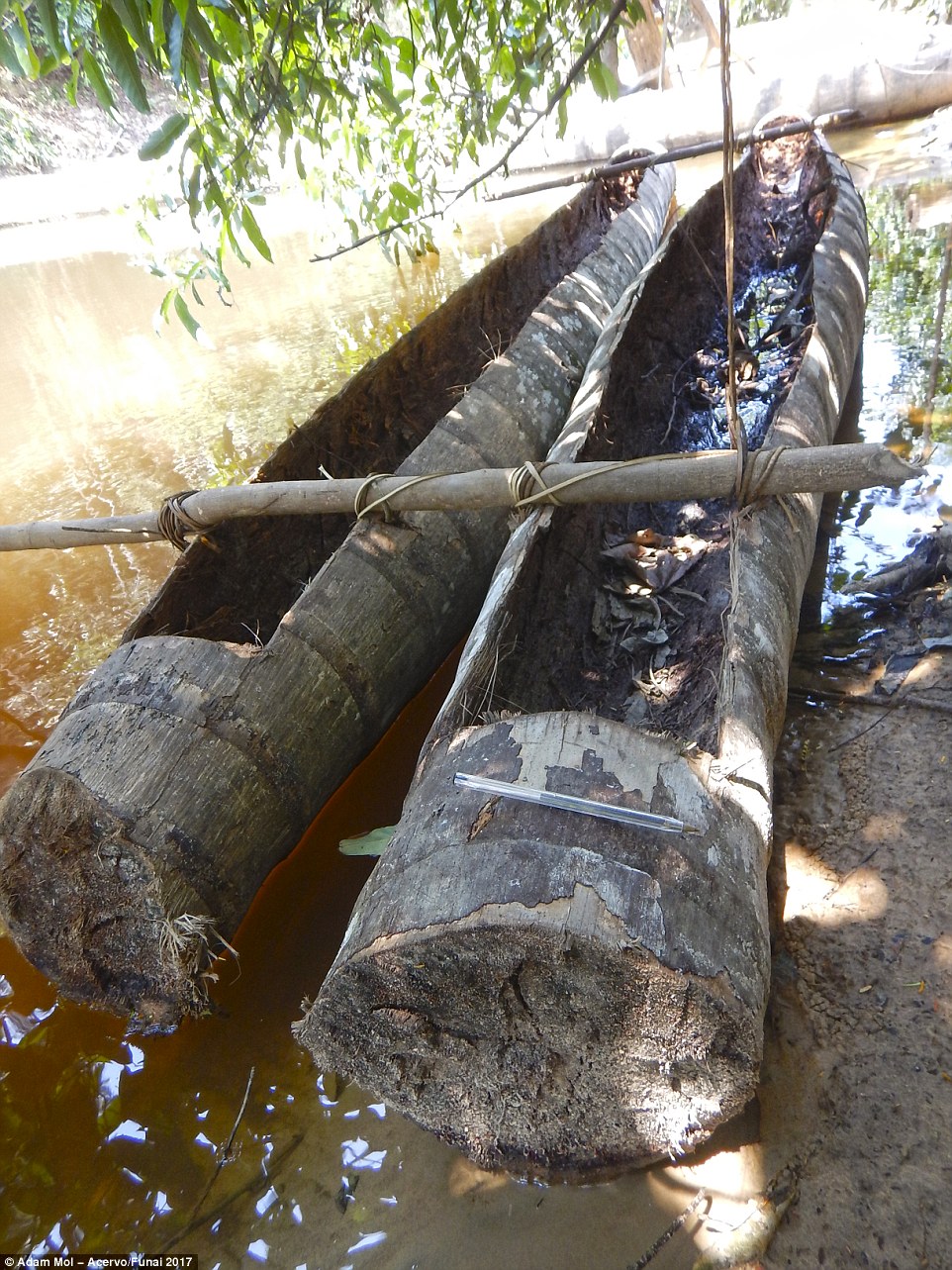 Funai’s Bruno Pereira said that no attempt will be made to contact this or any of Brazil’s uncontacted tribes. Funai also found dugout canoes probably used by the uncontacted tribe on the 1,050 km Rio Jutai River

But Funai believe there at at least 16 other tribes living in the forest who have never had any contact with civilisation.

Bruno Pereira, Funai’s isolated indians coordinator, said it is the first time Indians have been filmed using drones, which went undetected by the tribespeople during five drone flights during the expedition.

He said: ‘The use of drones provided safety both for the indigenous people and for the Funai team. 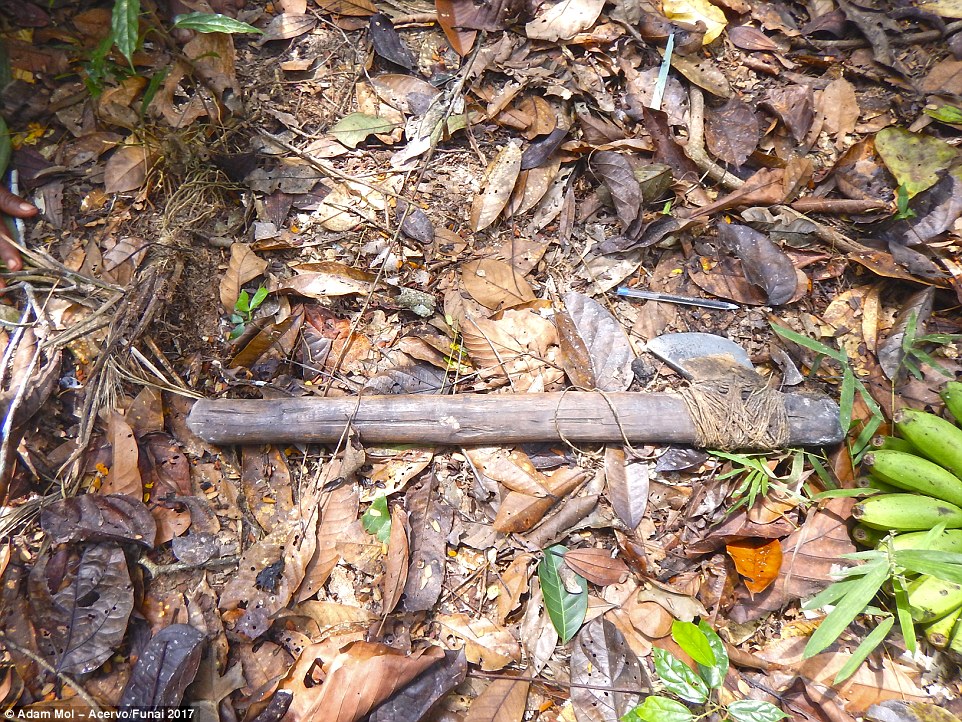 Funai believe there are 113 uncontacted tribes living in the Brazilian Amazon, only 27 of which have been sighted 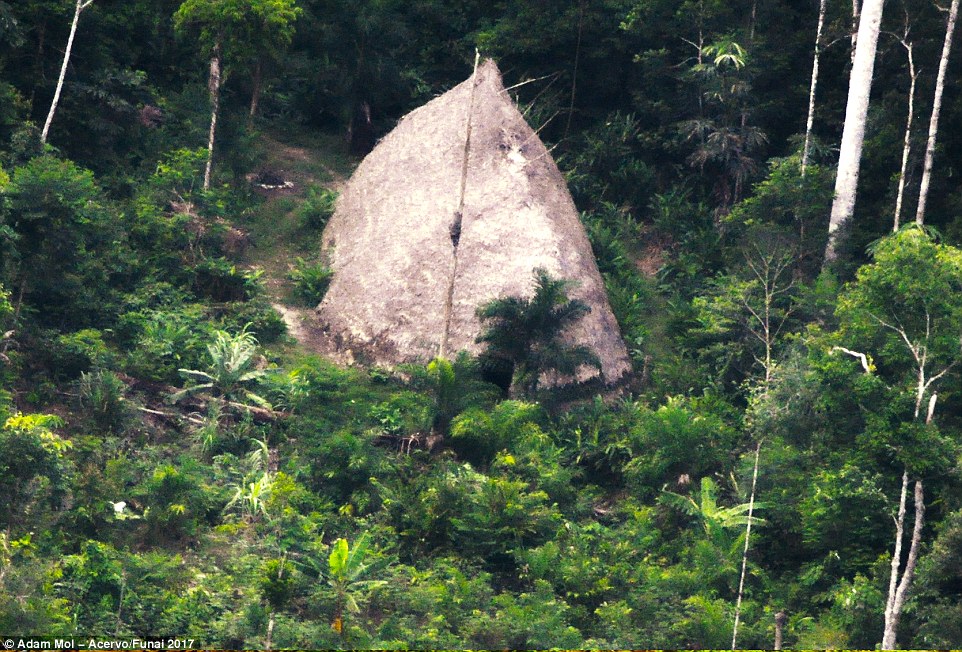 An ancestral long house known as a ‘maloca’, and a plantation of what is believed to be manioc

Contacted Amazonian tribes in the area

The area where the images were taken corresponds to the southern boundary of the Indigenous Land (TI) Javari Valley and north of the Mawetek Indigenous Land, which is the second largest in the country and is situated in the southwest of the Amazon.

The territory is occupied by six people contacted:

‘The idea is to share these scenes in order to confirm the existence of these Indians and the importance of protecting them. We need to strengthen our work in the region.’

The team also found evidence of illegal hunters in the region believed to be capturing exotic Amazonian species, including traps set up in tributaries of the Juruazinho river.

A number of animals were released from the traps, a spokesman said.

Funai’s Bruno Pereira said that no attempt will be made to contact this or any of Brazil’s uncontacted tribes.

He said: ‘We respect their isolation. Their isolation will remain until the day they decide against it, or until an extreme situation requires the State to make contact.’

Funai believe there are 113 uncontacted tribes living in the Brazilian Amazon, only 27 of which have been sighted, which could number up to 3000 people.

There are also said to be 15 uncontacted tribes in neighbouring Peru and others deep in the forests of Bolivia, Colombia and Ecuador.

Recently, Funai helped locate a man dubbed ‘the lonliest man on the planet’. He was part of a tribe known as the Flecheiros, or ‘People of the Arrow’.

But has lived alone in Amazon for 22 years after his tribe was slaughtered. Stunning pictures showed his face close up while video showed him swinging an axe at a tree.

A team of 30 tribal scouts and backwoodsmen – along with Funai – set out to find out about the Flecheiros before making the stunning discovery. 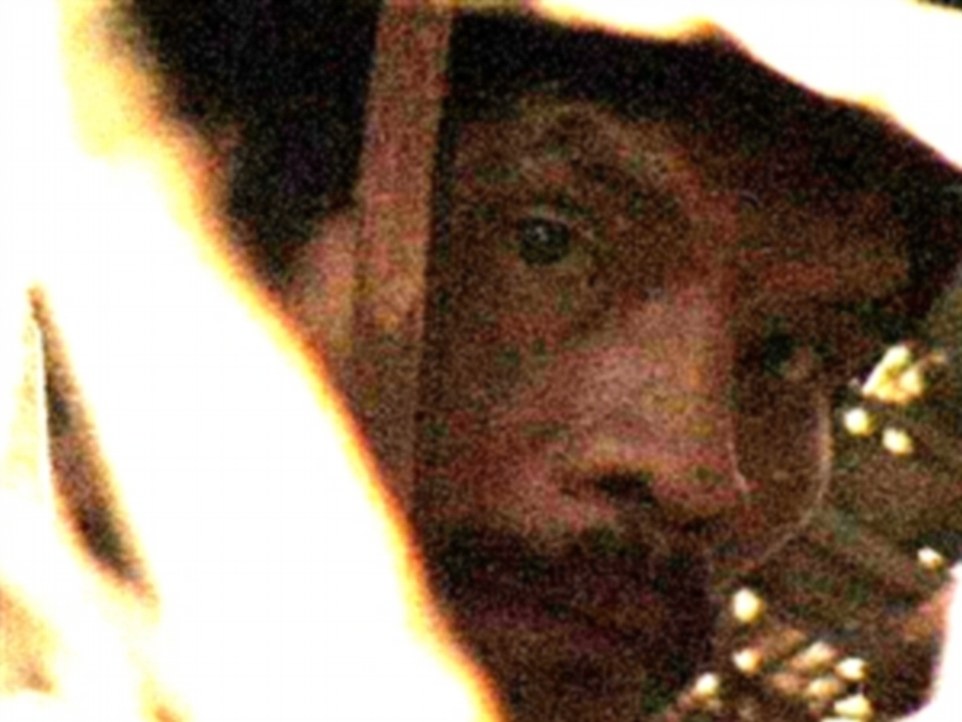 Lone survivor in Amazon, Brazil. The man, who is thought to be now in his 50s, is the last of a tribe whose name is not known 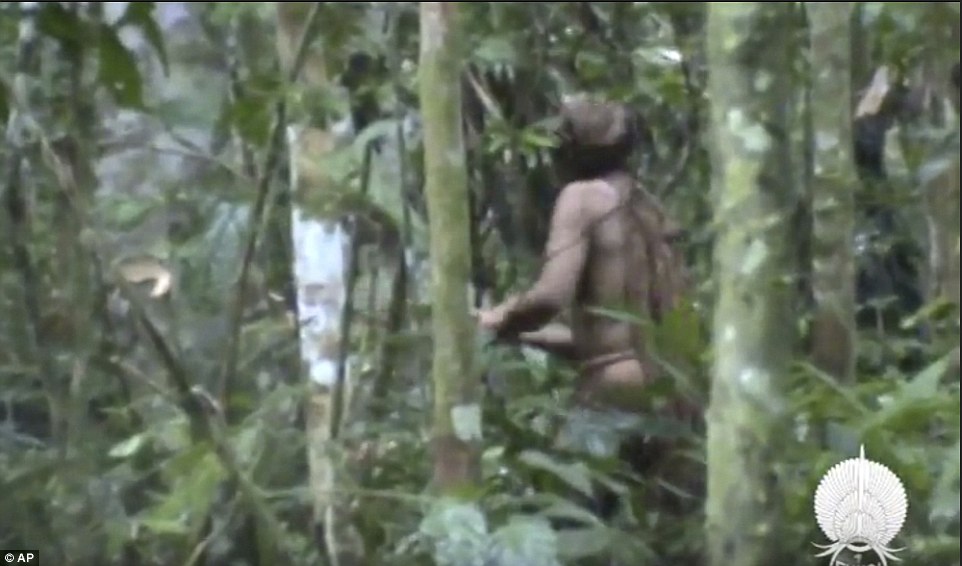 This 2011 video frame released by Brazil’s National Indian Foundation and published in late July shows an uncontacted indigenous man amid the forest in Rondonia, Brazil 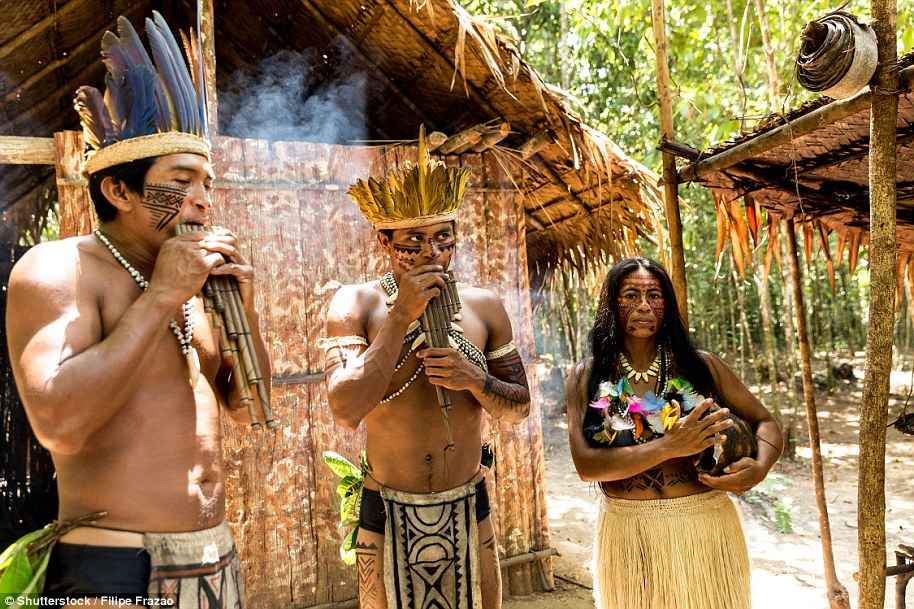 Brazil’s Amazon is home to more uncontacted tribes than anywhere in the world. There are thought to be at least 100 isolated groups in this rainforest, according to the government’s Indian affairs department FUNAI.

Their decision not to maintain contact with other tribes and outsiders is almost certainly a result of previous disastrous encounters and the ongoing invasion and destruction of their forest home.

Very little is known about these peoples. What is known is that they wish to remain uncontacted: they have shot arrows at outsiders and airplanes, or they simply avoid contact by hiding deep in the forest.

In Acre there could be as many as 600 Indians belonging to four different groups. Here they live in relative tranquility in several demarcated territories which are largely untouched.

Perhaps 300 uncontacted Indians live in the Massacó territory in Rondônia.

They use enormous bows and arrows – one bow was found measuring over four metres – very similar in size and design to the Sirionó tribe live in neighbouring Bolivia.

They clearly like to eat tortoises as mounds of shells have been found in abandoned camps.

However, other uncontacted groups are teetering on the edge of extinction with no more than a handful of individuals left.

A recent report says that some of them are abandoning their land due to the noise and pollution from the construction sites.

All are extremely vulnerable to diseases like flu or the common cold transmitted by outsiders and to which they have no resistance: good reasons to avoid contact.