PG Tips, Lipton and Lyon could be sold by retail giant Unilever because the British public are falling out of love with tea.

The British-Dutch firm claims that more and more customers are switching from a traditional cuppa to herbal brews, leading to its decision to review its global tea business.

Previously, Unilever said it would ‘turn around’ its tea business but has now admitted it is looking ‘at all options’.

This suggests that a partial or full sale of the tea business, which includes PG Tips and Lipton, could be on the cards.

PG Tips, Lipton and Lyon tea brands all could be sold by retail giant Unilever as Brits turn towards herbal teas (stock image) 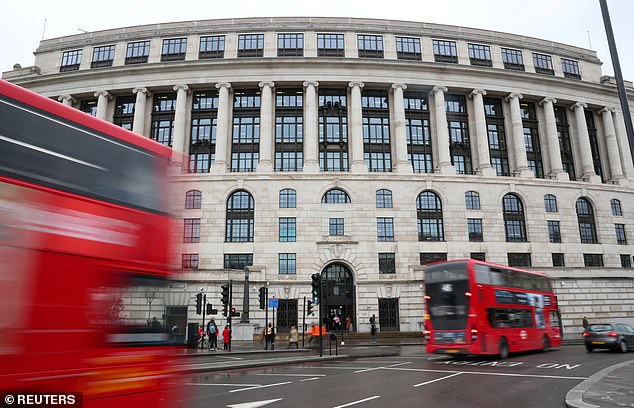 Previously, Unilever (pictured is its central London base) said it would ‘turn around’ its tea business but has now admitted it is looking ‘at all options’ – including a potential sale

Classic black tea is still Britain’s favourite hot drink but the number of cups of tea consumed in the UK fell by 630 million from February 2018 to 2019, according to research firm Kantar.

In August it was revealed that Twinings had overtaken PG Tips to become Britain’s bestselling brand of tea.

PG Tips, which rose to fame in the 60s and 70s with adverts featuring chimpanzees, saw annual sales dip by 7.2 per cent to £98.7 million.

At the time, the Grocer said: ‘Diversifying into areas such as cold infusions and functional teas has paid off for Twining, which gained nearly £4 million.

‘Meanwhile, PG Tips slumped below the £100 million mark as it bore the brunt of the black tea decline.’

The Manchester firm launched Pre-Gest-Tea in 1930, selling it as a before-digestion drink.

The word Tips was added as the drink only used the top two leaves of plant.

In 1956, its first TV advert airs before Chimpanzees became the star in ads until 2002.

In 1960, PG Tips introduced the teabag, which quickly outsold loose leaf tea and, by 1980, was the most popular form of consuming tea.

In 2007, the famous monkey became the new mascot of the brand, which remained vastly popular.

However, in 2019, PG Tips lost its most popular tea crown to Twinings, bearing the brunt of a decline in British black tea drinkers.

Now, after Unilever’s results on Thursday showed group sales grew at their slowest in a decade over the past quarter, finance chief Graeme Pitkethly said: ‘We will look at all options for the tea business.

‘Sales of traditional black tea, which is the largest part of the category, have been slowing for several years now due to changing consumer preferences in developed markets,’

The retail giant added that the review comes as sales of traditional black tea, seen as a staple of British life, slow down.

Instead, in developed countries including the UK, herbal teas are growing in popularity.

Kantar, meanwhile, says that the British tea industry is worth £667m a year, but over the last two years, demand has fallen by 2.7 per cent.

Demand has risen for other types of tea, with herbal teas now worth £52m and cold infusions valued at £11.2m.

AJ Bell investment director Russ Mould said: ‘The decision to launch a strategic review of its tea business reflects an attempt under CEO Alan Jope to reposition the company towards areas of higher potential after a period in which growth has been harder to come by.’

Unilever’s food and refreshment business has been hit particularly hard in North America and Europe as consumers reach for healthier options.

Six months after taking the helm in January last year CEO Jope announced he would streamline Unilever’s vast portfolio by focusing on what he described as ‘brands with purpose’, adding that these were its fastest-growing assets.

The so-called brands with purpose, including Dove, Knorr and Persil, contributed almost two thirds of revenue and drove 75 per cent of sales growth in the first half of 2019, the company said.

Brands thought to be among those that didn’t have purpose, and so at risk, were Marmite, Bovril, Magnum Ice Cream and Pot Noodle.

Jope said that the British classics could be axed if they do not ‘contribute meaningfully to the world or society’.