US-led coalition in Iraq and Syria admits it has unintentionally killed 1,300 civilians since 2014

US-led coalition in Iraq and Syria admits it has unintentionally killed 1,300 civilians in past five years…despite watchdog claiming it’s closer to 13,000

Operation Inherent Resolve, the US-led coalition against ISIS said they have unintentionally killed more than 1,300 civilians in Iraq and Syria since 2014.

In its monthly civilian casualty report, the coalition – made up mainly of the US, the UK, France and Iraq in Syria – said it had carried out 34,502 strikes since its air campaign against IS began when the terrorist group took over large swathes of territory.

Eight months ago, the coalition stated that it had inadvertently killed 1,100 civilian deaths and is currently still assessing 111 further allegations of deaths caused by their actions.

A picture taken in eastern Syrian province of Deir Ezzor shows explosions following shelling by the US-backed forces on the Islamic State group’s embattled holdout of Baghouz, on March 11

However, Airwars – a not-for-profit ‘transparency project’ – place casualties at nearly 13,000, including over 3,500 named victims, with Amnesty International also having previously called for clarity over numbers.

In 2017 alone, however, activists said that more than 1,600 civilians were killed in US-led coalition air and artillery strikes during the offensive to oust the Islamic State group from Raqqa, Syria – nearly 10 times higher than coalition estimates.

The coalition said their campaign caused 180 deaths but Airwars and Amnesty International urged them to ‘end almost two years of denial’ about deaths of this nature.

The two humanitarian groups said they conducted their own research at 200 strike locations and managed to identify 1000 victims. 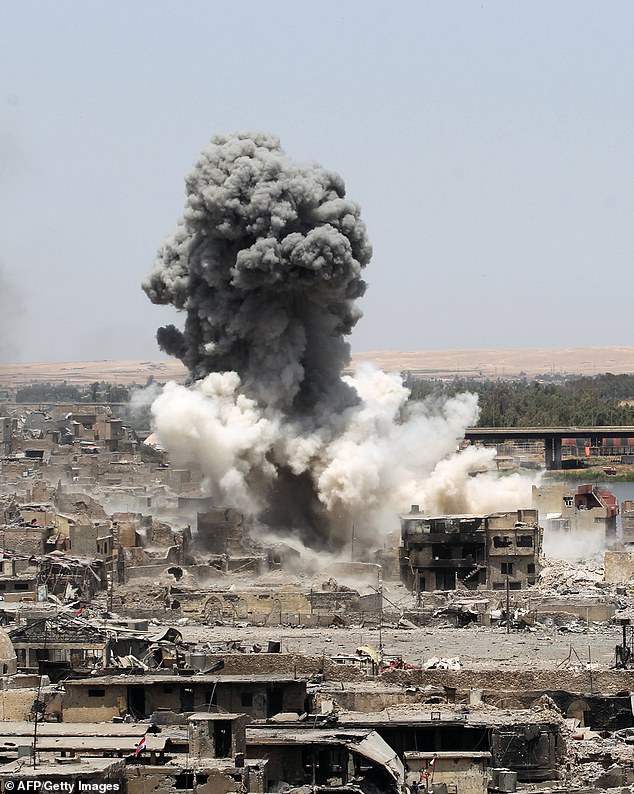 At the time, a coalition spokesperson told the BBC that ‘any unintentional loss of life during the defeat of [IS] is tragic. However it must be balanced against the risk of enabling [IS] to continue terrorist activities, causing pain and suffering to anyone they choose’.

The 111 open reports are based on local media reports and Airwars reports. CJTF-OIR has dismissed several other Airwars reports due to lack of information of the time, location and details to assess its credibility.

Since April 30, regime and Russian fire has killed 288 civilians including 67 children in northwest Syria, the Syrian Observatory for Human Rights said. 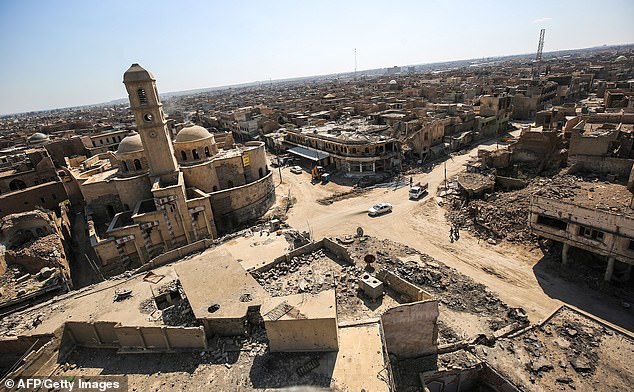 A picture taken on March 14, 2018 shows a view of destruction surrounding the Roman Catholic Church of Our Lady of the Hour (L) in the old city of Mosul

But the regime and its Russian ally have since late April ramped up deadly air strikes and rocket fire on the jihadist stronghold – killing 948 people in total, including fighters on both sides.

On Thursday, Turkey President Recep Tayyip Erdogan by telephone told his Russian counterpart Vladimir Putin it was important to ‘apply the ceasefire without delay in order to focus once again on finding a political solution’ to the Syrian conflict.

They suggest Turkish action in Iraq and Syria has killed 406–744 innocent victims.