The operation was the latest attempt to counter what Washington sees as the country’s efforts to limit freedom of navigation in the strategic waters.

It also comes just days after the Pentagon pulled China’s invitation to join maritime exercises in the Pacific because of its ‘continued militarization’ of the islands.

While this operation was planned months in advance, and similar operations have become routine, it comes at a particularly sensitive time between the two nations.

US officials, speaking on condition of anonymity, said the Higgins guided-missile destroyer and the Antietam, a guided-missile cruiser, came within 12 nautical miles of the Paracel Islands.

The area is among a string of islets, reefs and shoals over which China has territorial disputes with its neighbors.

US military vessels carried out maneuvering operations near Tree, Lincoln, Triton and Woody islands in the Paracels, one of the officials said.

Critics of the operations, known as a ‘freedom of navigation’, have said that they have little impact on Chinese behavior and are largely symbolic.

The US military did not directly comment on Sunday’s operation, but said US forces operate in the region daily.

‘We conduct routine and regular Freedom of Navigation Operations (FONOPs), as we have done in the past and will continue to do in the future,’ US Pacific Fleet said in a statement. 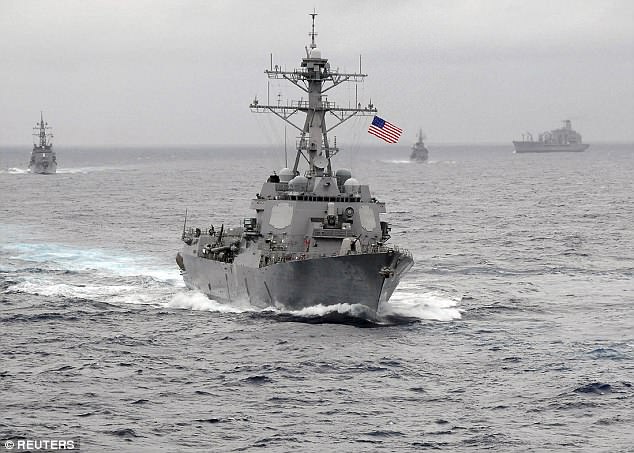 China’s Defense Ministry expressed its anger, saying it had sent ships and aircraft to warn the US warships to leave.

It claimed the US had entered the country’s territorial waters without permission.

In a separate statement, China’s Foreign Ministry urged the United States to stop such actions.

‘China will continue to take all necessary measures to defend the country’s sovereignty and security,’ it added, without elaborating.

Pentagon officials have long complained that China has not been candid enough about its rapid military build-up and using South China Sea islands to gather intelligence in the region.

China’s claims in the South China Sea, through which about $5 trillion in shipborne trade passes each year, are contested by Brunei, Malaysia, the Philippines, Taiwan and Vietnam. 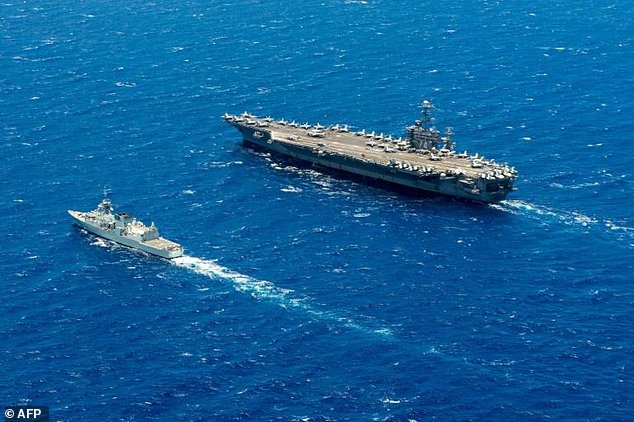 And earlier this month, China’s air force landed bombers on disputed islands and reefs in the South China Sea as part of a training exercise in the region, triggering concern from Vietnam and the Philippines.

It was the latter act that caused Defense Secretary James Mattis to withdraw China’s invitation to the Rim of the Pacific (RIMPAC) exercises.

RIMPAC is held every two years and involves more than 20 countries, including Japan, India, and the UK.

China was invited to join the RIMPAC, which the Pentagon is the biggest military exercise in the world, under the Obama administration as a way to boost relations with Beijing and encourage the country to stop the militarization of a group of disputed islands in the South China Sea.

But China will miss out on the exercises this year, which are held in Hawaii, following Mattis’ decision. 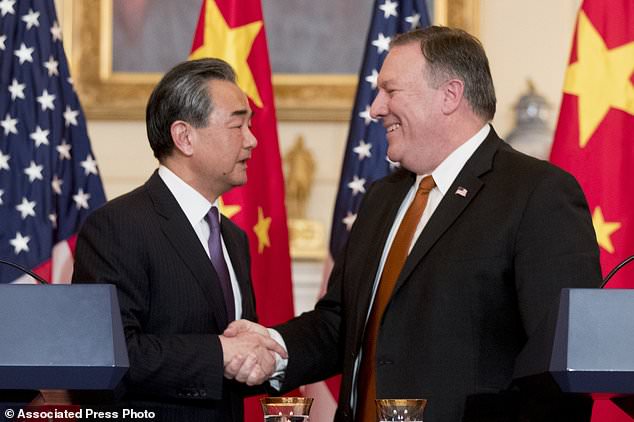 ‘We have disinvited the PLA Navy from the 2018 Rim of the Pacific Exercise. China’s behavior is inconsistent with the principles and purposes of the RIMPAC exercise.’

China’s Foreign Affairs Minister Wang Yi said the US decision to exclude it from RIMPAC was ‘very non-constructive.’

‘It’s also a decision taken lightly and is unhelpful to mutual understanding between China and the US,’ Wang said at a press conference with Secretary of State Mike Pompeo after the two met in Washington.

Pompeo did not comment on the matter, saying only that the pair had had a ‘good discussion’ about American concerns of militarization of the South China Sea.

The decision to pull China’s invitation comes amid new tensions between Beijing and Washington.

President Donald Trump said Wednesday that he was not satisfied with talks aimed at averting a trade war with China.