Expensive second-hand electric cars are falling in value with dealers having to slash prices to sell lingering stock as demand for battery models hit reverse in November, according to reports.

The average price of a year-old Tesla Model 3 slipped almost 7 per cent compared to October, which is a fall of more than £3,000, while 12-month-old examples of the Model S have dropped by almost £4,000, according to cap hpi.

The biggest faller was BMW’s i3 and we reveal the top 18 biggest second-hand electric car price fallers last month below.

Used electric cars dipping in price: These are the 10 biggest value fallers in November as falling demand for second-hand EVs accelerated last month

The average price of a three-year-old second hand electric car has dropped by an average of 3.6 per cent between October and November, according to cap hpi.

Its director of valuations Derren Martin says retail demand for used electric vehicles has dropped off dramatically in recent months, but the decline accelerated in November.

It meant the price gap to petrol and diesel cars shrunk last month – though battery-powered cars are still at a premium on the second-hand market. 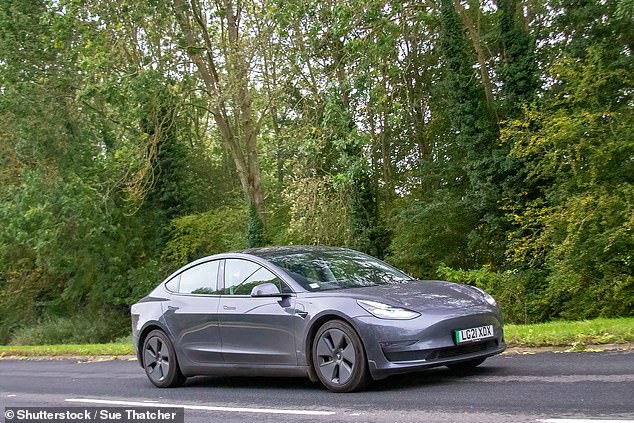 While the BMW i3 was the biggest value faller of all electric cars in November, among those slipping back the most are Teslas.

Based on one-year old examples, the sale price of popular Model 3s were down on average by 6.8 per cent in the month, which works out at an average fall of £3,100.

Over the last three months, the Model 3 has dropped by an incredible 16 per cent, which is an average of almost £7,000, cap hpi’s data shows.

There was an even greater financial drop for the Model S in November, with its 5 per cent decline in the month equivalent to prices falling by almost £4,000, while values of year-old Model Y are also dipping. 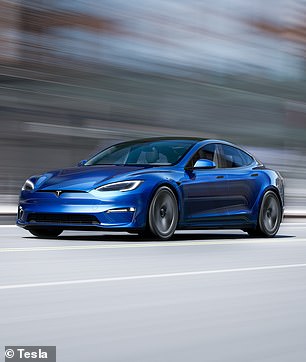 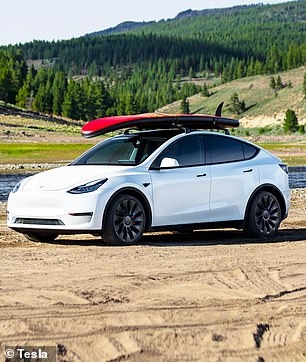 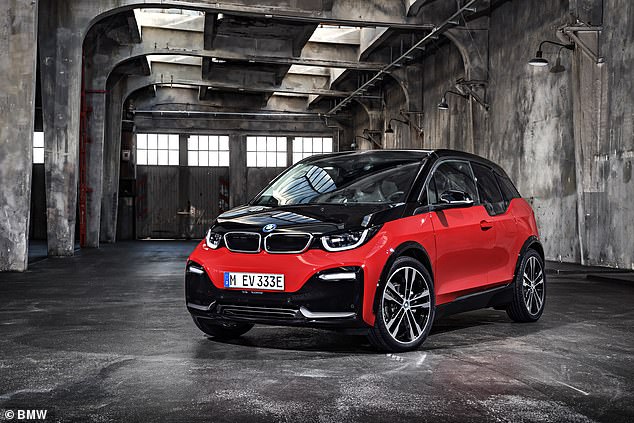 The biggest electric car faller in November – in terms of percentages – was the BMW i3. Sale prices of year-old examples were down 7.8% on October 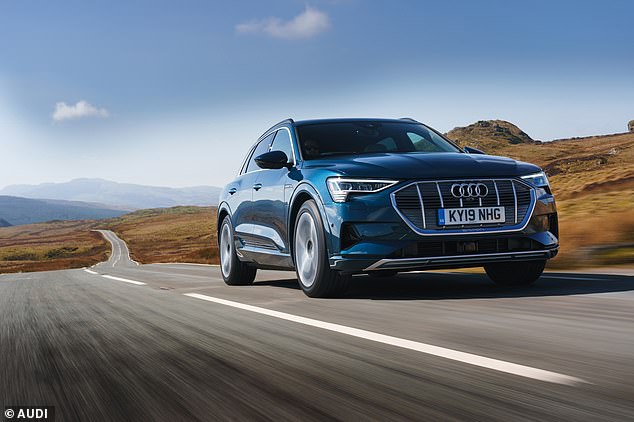 Audi’s expensive e-tron SUV was another big faller in the month, as sale prices fell 5.9%, which is £3,102 lower than the average figure achieved in the previous month

While Elon Musk’s car brand has been hardest hit by the downturn in demand, other marques suffered a similar fate in November.

Even the ‘affordable’ Nissan Leaf has posted a decline in November, with 12-month old examples slipping 4 per cent, which is around £1,000.

In contrast, petrol and diesel average values have dropped by less than the seasonal average and hybrids and plug-in hybrids are also performing ‘relatively well’, Derren says. 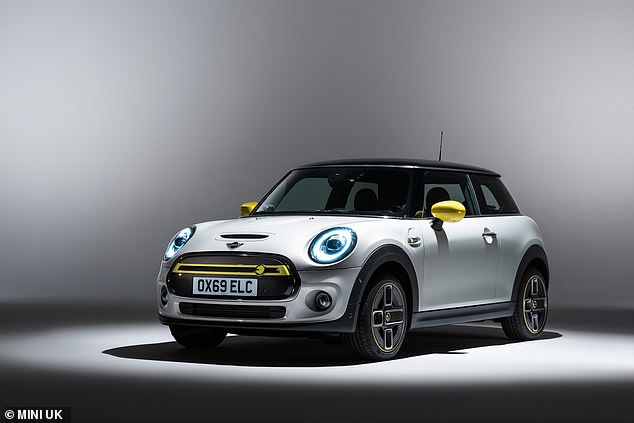 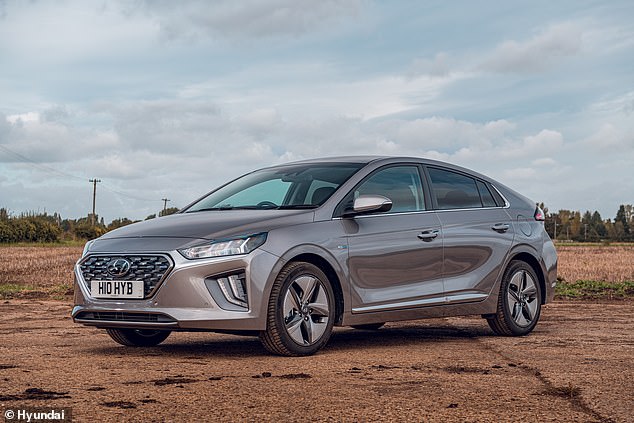 Another EV among the biggest fallers was the Hyundai Ioniq family car. This has been removed from new showrooms in recent months 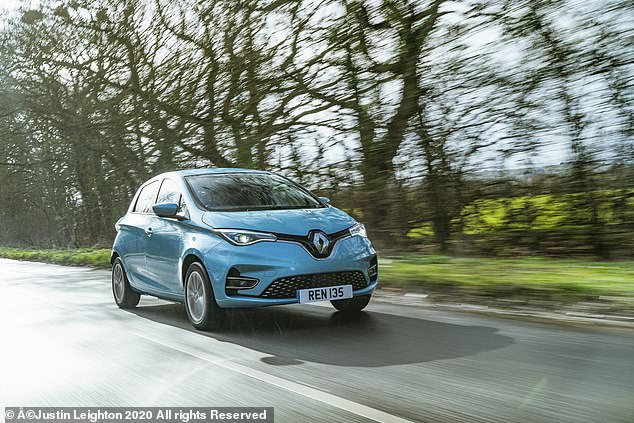 Renault’s Zoe is considered one of the best small EV on the market, but dealers are trying to sell their stock of these cars

Why are used electric car prices going into reverse?

Derren says retailers are ‘scratching their heads’ around the situation with second-hand electric vehicles.

However, he points to five reasons for why they have taken a sharp dip in value in November:

1. More EVs on the market than ever before

One of these factors is that more electric models are entering the used market, which was inevitable on the back of booming new registrations in the last few years.

In fact, the market share of used electric vehicles has trebled since 2021. And for all cars up to three-years old, cap hpi says the market share has jumped to nearly 9 per cent compared to just 2 per cent 12 months ago.

Mr Martin says many dealers are reporting an increasing level of ‘days to sell’ for EVs, with some failing to shift battery cars they’ve had in stock for up to three months.

This has forced traders to lower the prices of these vehicles in a push to move them on, with some expressing no desire to bring in fresh stock of used electric cars until they have sold the models currently on forecourts.

It’s also worth noting that all cars – not just EVs – are starting from a heavily inflated price point, with second-hand models soaring in value since the Covid-19 pandemic triggered supply issues for new cars.

Cap hpi says the cost-of-living crunch will also be starting to bite these pricier electric cars.

With second-hand EVs sometimes costing in excess of £10,000 more than petrol and diesel equivalents, many consumers simply can’t afford them, especially now that budgets are tightening and finance costs rising. 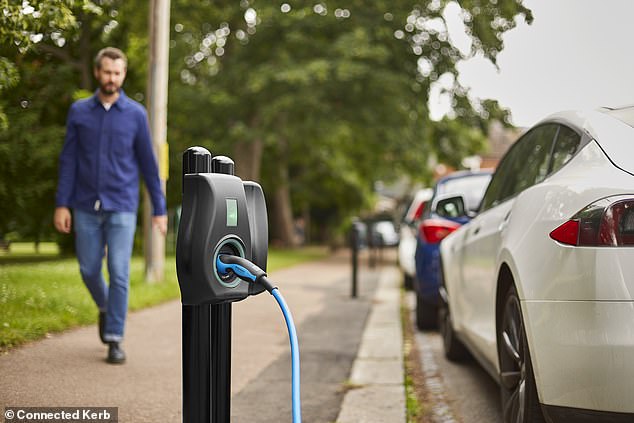 Cap hpi says there are a number of reasons for why falling used car prices have accelerated in November, including the cost-of-living crunch, attractive new EV deals and increasing stock

3. Rising charging costs as a result of energy price hike

The recent spike in energy costs has made electric vehicles more expensive to charge at home and almost as expensive as fuelling a petrol car if you’re only charging using public devices.

This has created another potential road block in terms of demand, with some buyers delaying purchases until energy bills fall.

Mr Martin says November had seen a rise in volumes of pre-registered vehicles appearing in the market, along with attractive discounts on several new electric models as manufacturers begin to show recovery from the post-Covid supply issues that have crippled the market since 2020.

He says there are also some ‘very competitive leasing and broker deals’ on new battery-powered vehicles that are available for delivery before the end of the year.

These are likely enticing EV buyers away from the second-hand market.

Another key reason why used electric vehicles are less attractive is because new models can be far cheaper to run for those who can secure one as a company car.

Electric cars currently benefit from benefit-in-kind taxation of just 2 per cent, which combined with salary sacrifice schemes makes them extremely cheap to run – especially when you consider that insurance and maintenance is included.

What’s also likely to have weighed on the minds of electric car buyers is the Government’s decision to start making EV owners pay vehicle excise duty – or road tax – from 2025 onwards.

This was announced by Chancellor Jeremy Hunt in his Autumn Statement on 17 November and could be another factor affecting demand in fortnight since.

The changes to VED rules will see used EVs over a year old subject to a standard flat rate of £165-a-year from the middle of the decade, while models that cost over £40,000 new will also be subject to a £355-a-year ‘expensive car supplement’ premium tax from the second to the sixth year.

This will impact year-old models currently only forecourts.

And these are likely to rise in the next three years, so EV tax costs could be even higher by the middle of the decade.