The Silver Arrows have won every race staged in Russia since the fixture was added to the calendar in 2014.

Bottas, who will be replaced by George Russell at Mercedes next season, triumphed here last year and in 2017, too, and the Finn stole an early advantage.

Hamilton and Verstappen are back on track following their second significant collision of the season at the Italian Grand Prix a fortnight ago.

The rivals were separated by just 0.016 sec in the first running of the weekend, with Verstappen to be demoted three places on the grid after he was blamed for the crash at Monza. 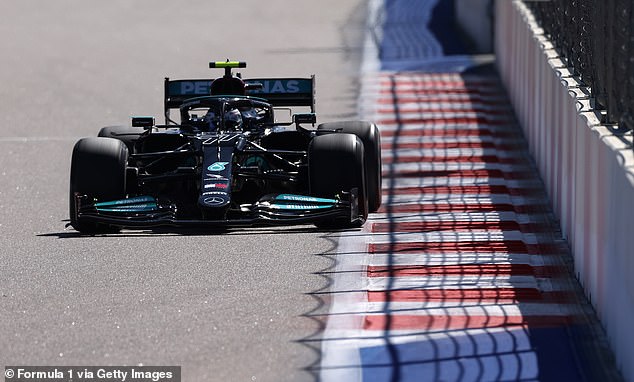 Hamilton will be keen to capitalise, but while Friday’s action took place under clear blue skies, rain is set to impact qualifying on Saturday.

Fresh from a career-best second at Monza, Lando Norris finished eighth in his McLaren, 1.5 sec off the pace.

However, the British driver, 21, lost control of his McLaren in the closing moments and made contact with the pit wall. Norris limped back to his garage with minor damage.

Daniel Ricciardo, who ended McLaren’s nine-year winless drought with a fine triumph in Italy, was only 14th here, nearly one second slower than team-mate Norris.

Home favourite Nikita Mazepin finished 19th for Haas ahead of team-mate Mick Schumacher. It was announced on Thursday that both drivers will be retained by Haas for 2022.

The concluding action of the day gets under way at 3pm local time.