The vast majority of 19,000 fines handed to Victorians for breaching coronavirus rules will be abandoned and never collected.

Police who gave penalty notices to people breaching public health orders have been told to give cautions for unpaid fines, allowing rule breakers to escape penalty.

The new advice is in spite of Premier Daniel Andrews threats in October to ‘come after’ rule breakers because there was ‘too much at stake’.

Officers are concerned it will send mixed messages to the public and undermine future public health orders.

‘Our members were asked to do a thankless job by the government and they did that,’ Police Association Victoria secretary Wayne Gatt said.

‘If offenders form a view from this experience that penalties will be readily converted to cautions or diversions as a matter of course, then that sends a concerning message,’ he told The Age.

The change also angered people who paid their fines on time, and there are already calls to have those fines refunded in the interest of fairness.

More than 19,000 penalty notices were issued by October last year, and only 845 were actually paid by the time.

Eighteen per cent of infringement notices reached ‘notice of final demand’ stage and 3,455 were at the point when fines enforcement was called in.

According to an internal email prepared by the police legal services department and sent on December 17, the amended guidelines urge officers to take on a more lenient approach with the public.

‘There are three tiers in the guide and informants/prosecutors must proceed with the lowest tier option unless inappropriate to do so,’ the email read. 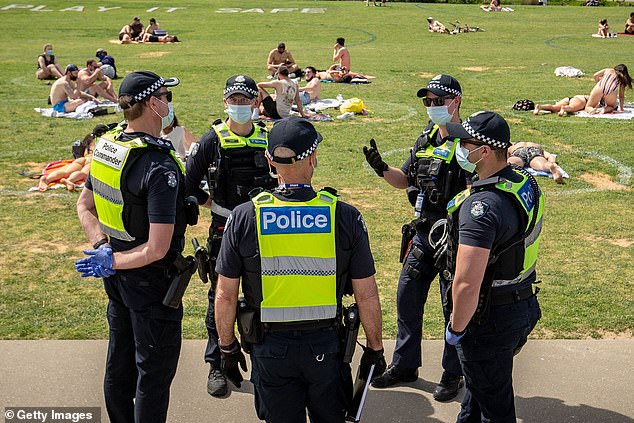 Under the previous system, Victorians were fined $200 for not wearing a face mask in public and up to $1652 for failing to stay at home. Pictured: Police patrolling St Kilda beach in October

People who are found to have repeated, deliberate or continuing breaches of the chief health officer’s directions’ will be pursued, or people who refuse to isolate while infected with Covid-19.

Others who committed less serious breaches are in line to have their fines turned into cautions.

Victorians were fined $200 for not wearing a face mask in public and up to $1,652 for failing to stay at home.

Residents who gathered unlawfully were fined $4,957, along with Covid-positive people who did not isolate.

Victoria Police said in a statement it supported the chief health officer by ‘enforcing the directions that are in place at the time and issues infringements to those who blatantly breach the directions’.

‘To ensure consistency across the organisation when dealing with reviews or contested infringements for breach of CHO directions, guidance in the form of a three-tiered system was developed,’ it said.