The planes that dropped 24,000 American, British, and Canadian airborne troops into Normandy as part of Operation Overlord have taken to the skies once again, this time over New England as they begin their journey to Europe to commemorate the 75th anniversary of D-Day.

Their most illustrious operation came on June 6, 1944, when the planes were used to airdrop thousands of paratroopers behind enemy lines in the middle of the night. The ensuing battle for Normandy ultimately helped pave the way for Hitler’s defeat and bring World War II to an end.

Operation Overlord was the codename for the Battle of Normandy which saw 1,200-planes take part in an airborne assault followed by an amphibious assault involving more than 5,000 vessels.

12 planes, including five C-47’s that flew on D-Day in June 1944 are on their way to Europe from the United States 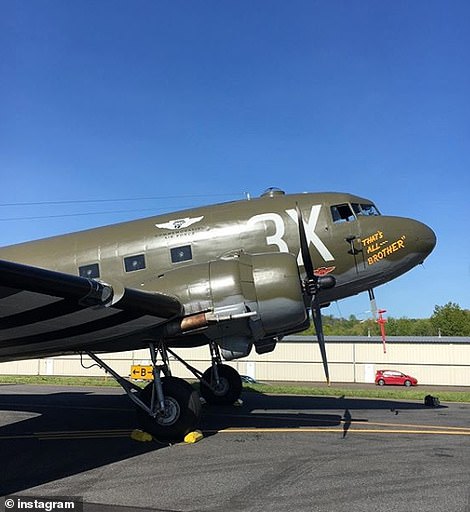 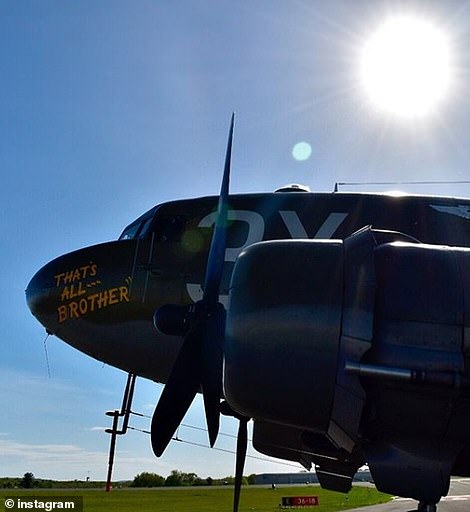 The C-47 That’s All, Brother led the main airborne invasion of Normandy. The historic aircraft is part of the ‘D-Day Squadron’ that left Sunday for a weeklong, trans-Atlantic flight in preparation for the commemoration of the 75th anniversary of D-Day

The trip could be flown in at little as 15-17 hours, but the aircraft will have to make several stops to refuel in Goose Bay in Newfoundland, Canada; Narsarsuaq in southern Greenland; Reykjavik in Iceland and onto Prestwick on Scotland’s west coast

The US, British, and Canadian paratroopers landed on French soil shortly after midnight and came in either by parachute or by glider.

13,000 paratroopers from the U.S. 82nd and 101st Airborne divisions along with British paratroopers — making for a total of about 24,000 combat jumpers landed in Nazi-occupied France.

The mission for the C-47s and gliders towed by the planes was to dropped the soldiers behind the Germans’ main lines with the objective of taking the town of St. Mere Eglise in order to secure key approaches to the beaches.

By the end of that day, nearly 160,000 troops had crossed the English Channel and landed in Nazi-occupied France and laid the foundations of the Allies victory on the Western Front, but there were enormous casualties too. 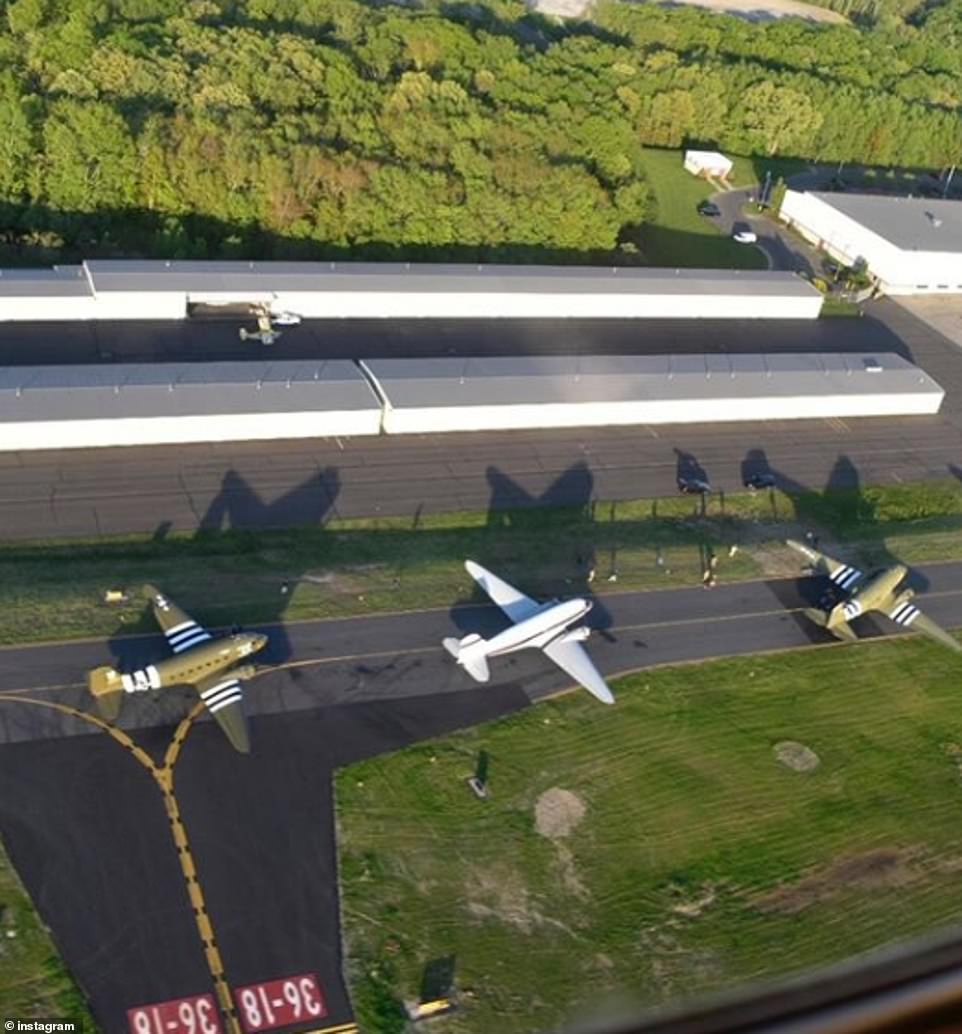 The Douglas DC-3 aircraft and C-47 Dakota transporters are on a week-long, trans-Atlantic flight culminating June 5 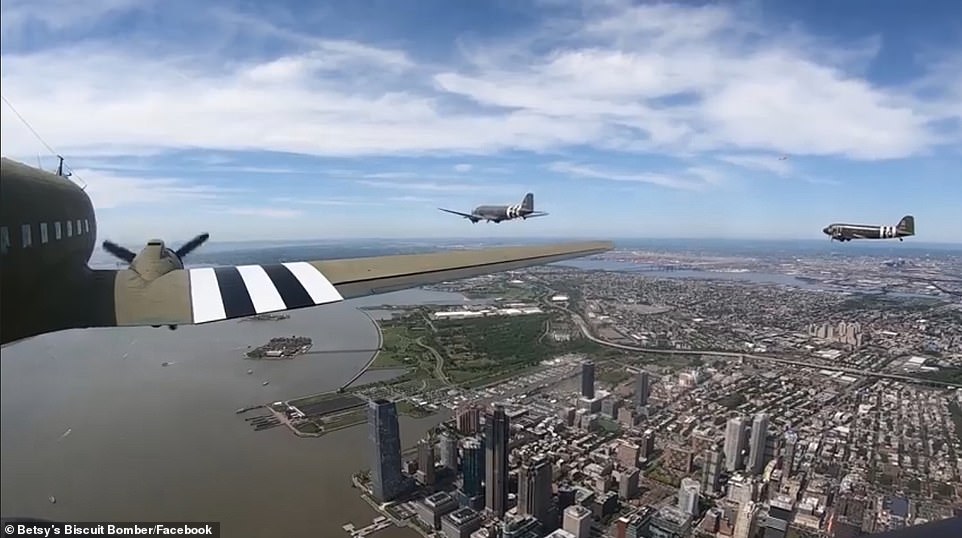 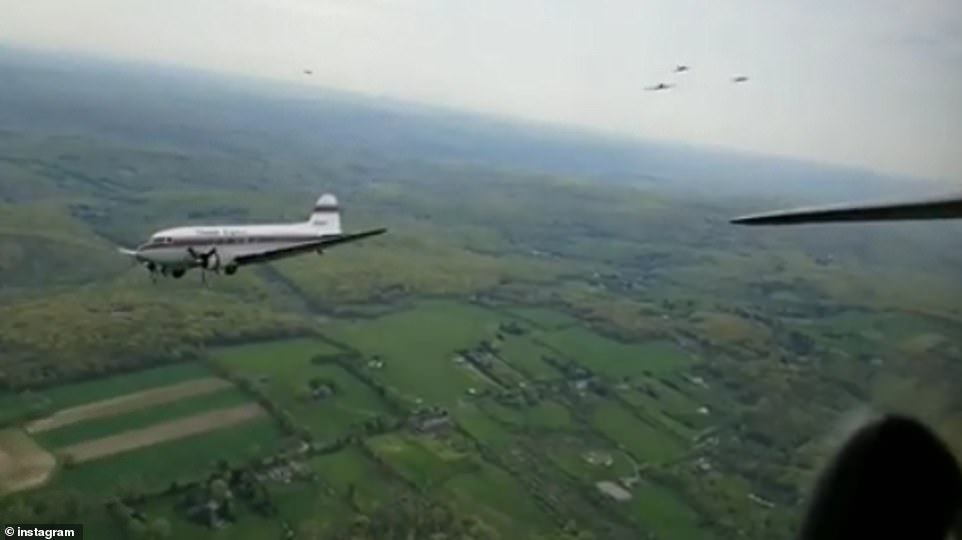 The planes will stop for fuel in Newfoundland, Greenland, Iceland, Scotland and England, retracing the route used when the planes were brought to Europe during World War II in 1944

Almost seventy-five years to-the-day, these military aircraft are flying once again as they return to Europe where they will take part in anniversary commemorations.

A total of 12 planes, including five C-47’s bearing the black and white invasion stripes of Operation Overlord, left Connecticut on Sunday where they will join 15 more planes before dropping 250 D-Day paratroopers in a reenactment over Normandy.

Placid Lassie, D-Day Doll, That’s All, Brother and other planes from the D-Day Squadron departed from Waterbury-Oxford Airport in Connecticut to cross the Atlantic to take part in Daks Over Normandy.

‘There have not been this many Dakotas crossing the Atlantic since the war,’ said Steve Lashley, the director of communications for the D-Day Squadron told the New York Times. ‘People are going to be able to look up and see something they’ve never seen before.’

‘This is our last chance to honor the members of the greatest generation while they’re with us,’ Lashley said. ‘The 80th will be too late.’

‘That’s why we’re doing this mission, we’re bringing history to life,’ said Andy Maag, who is flying a C-47 named That’s All, Brother.

The trip across the pond could be flown in as little as 15-17 hours, but the aircraft will have to make several stops to refuel in Goose Bay in Newfoundland, Canada; Narsarsuaq in southern Greenland; Reykjavik in Iceland and onto Prestwick on Scotland’s west coast. The journey should take about a week, depending on weather conditions. 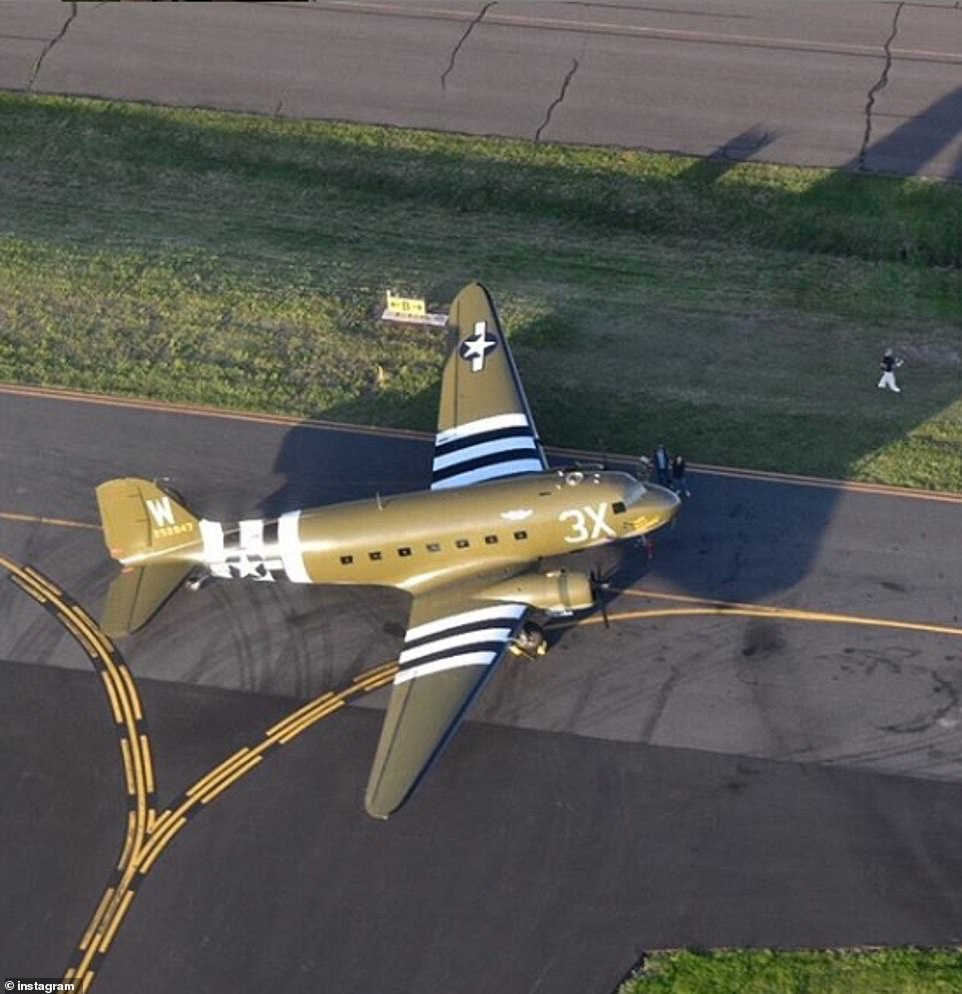 The planes in the D-Day Squadron, some of which started as DC-3 airliners that the military converted to troop carriers, are all owned by nonprofit organizations or individuals 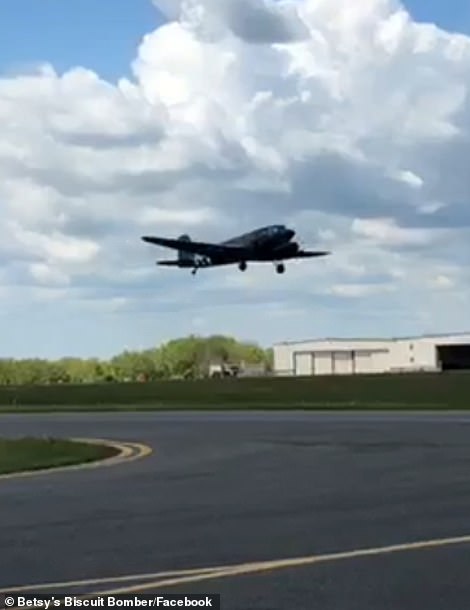 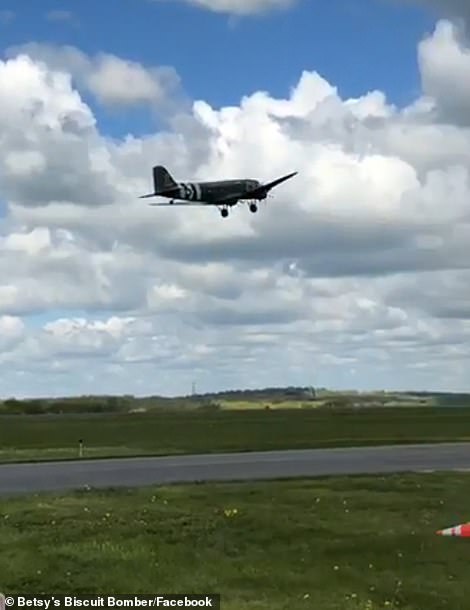 12 planes are making the journey from the US to Europe. S-Day 1944 saw more than 800 Dakotas and other aircraft fill the sky

The international event will honor the soldiers of World War II who liberated France and fought on to victory over the following year.

Next month’s event will see a gathering of volunteer pilots, crews and historic planes all come together, culminating on June 5 with the paratroopers landing in the same drop zones that were used in the June 6, 1944 invasion according to the Hartford Courant.

‘It’s an extraordinary opportunity to honor our veterans and to teach new generations about America’s place in the world,’ Placid Lassie pilot Eric Zipkin of Middlebury said.

The most important aircraft to support the airborne assault was formed by more than 800 Douglas C-47 Skytrains (Dakotas), the military version of the Douglas DC-3.

These winged work horses carried the brunt of all men into battle across the English Channel with many calling them the ‘Unsung Heroes’ of the war. 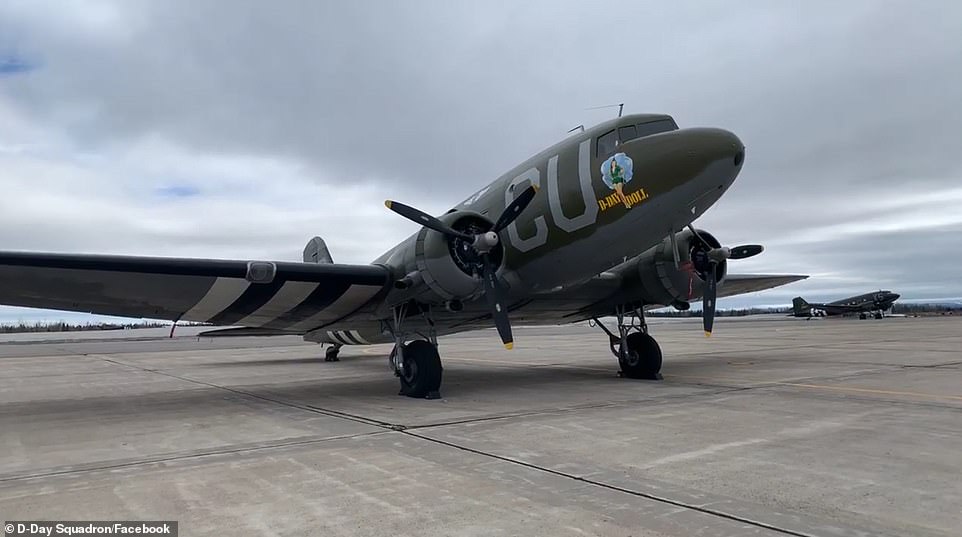 The planes and pilots will meet up with a dozen European Dakotas and together cross the English Channel to Normandy for the ceremony commemorating the June 6, 1944, military landing 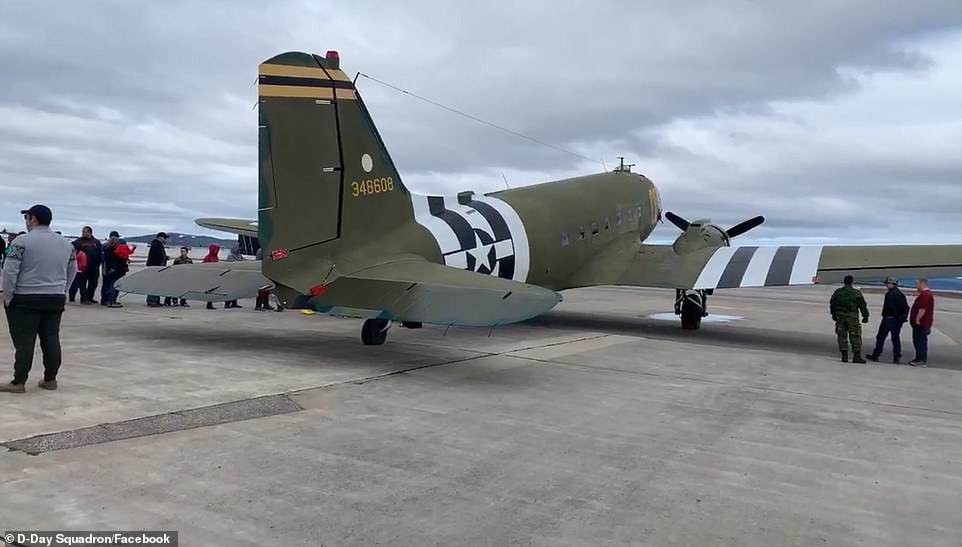 D-Day Doll was built at the Douglas factory in Santa Monica, California. It is one of 159 C-53Ds and was built in 1943 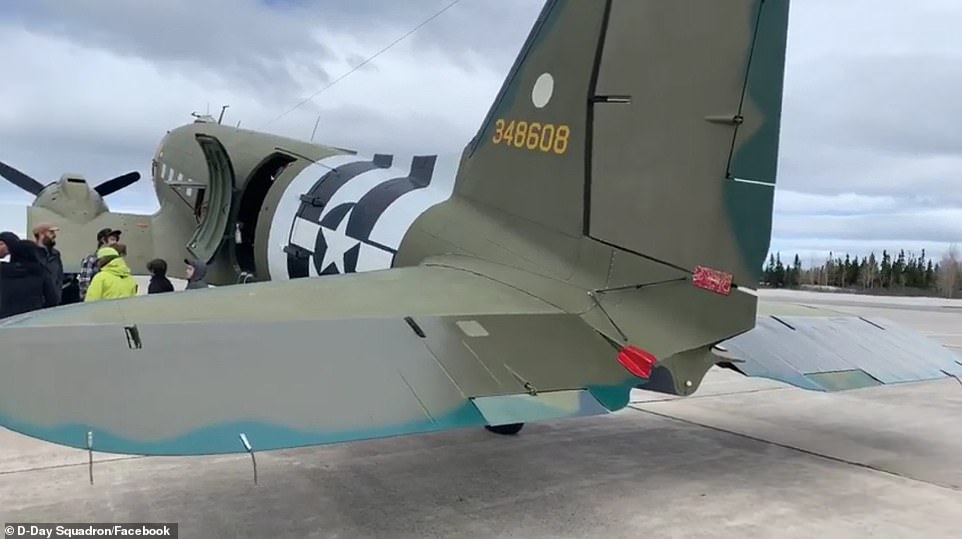 While most of the plane’s flight controls are 1930s-technology, the latest navigation and communication equipment has been installed into the plane to ensure the journey goes as smoothly as possible

The D-Day Squadron from Connecticut will see an entire squadron of Douglas DC-3/C-47 Dakotas head over to commemorate the anniversary in both the United Kingdom and France.

The planes were able to carry 28 fully armed soldiers or 6,000 pounds of cargo and were nicknamed Gooney Bird, Dakota and the Vomit Comet.

Last week, six of the the aircraft flew over Pratt’s East Hartford and Middletown plants to honor the men and women who made the engines. 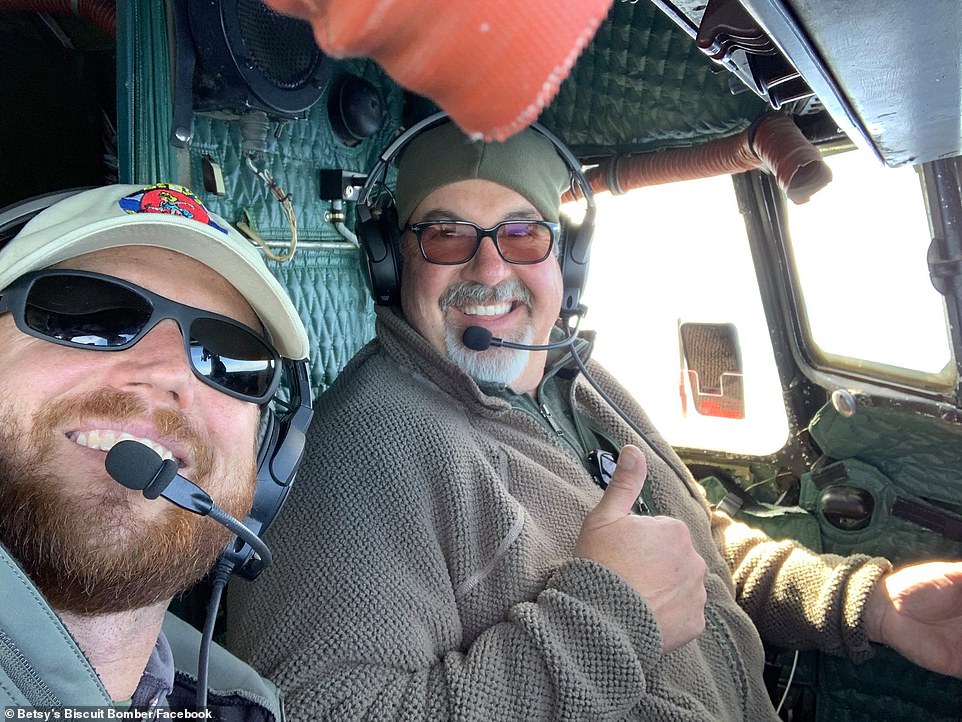 The pilots of Betsy’s Biscuit Bomber, a 1944 C-47 is also heading over to Europe. The plane has its original World War II interior 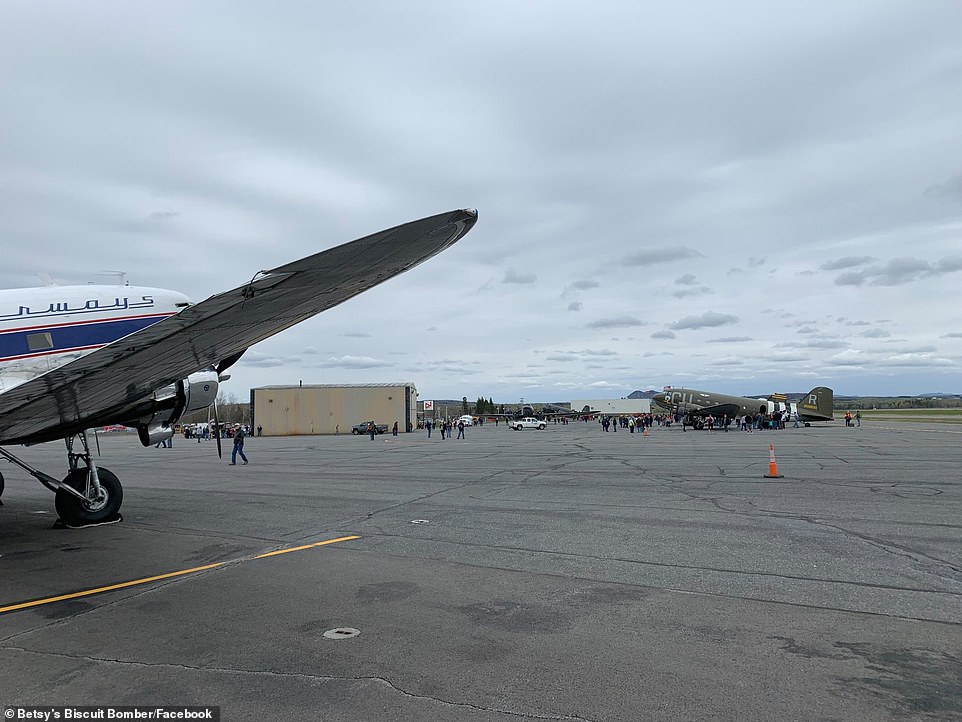 In just over two weeks time, the plan once again is for the skies over southern England and Normandy to be filled with the aircraft and hundreds of paratroopers.

The plan is to follow in the footsteps of the Greatest Generation – boarding the aircraft in England before flying across the English Channel in formation before the parachute jump into the historic drop zones of Normandy.

The paratroopers will be wearing WWII style Allied uniforms and will jump using military round parachutes – mimicking those used in 1944.

The planes that make up the D-Day squadron are all privately owned by nonprofit organizations or individuals. The organizations behind each aircraft managed to raise enough money for the flight to Europe thanks to donations and contributions from businesses.

The total cost of the voyage is estimated to be about $3 million, including fuel costs of about $2 million.

While most of the plane’s flight controls are 1930s technology, the latest navigation and communication equipment has been installed into the old cockpits to ensure the journey goes as smoothly as possible. Every aircraft it also equipped with life rafts and survival suits.

‘This is dangerous,’ said Len Roberto, a member of the board of directors of the Connecticut Air and Space Center told The Times. ‘It is not an easy journey in a 75-year-old airplane.’

In addition to honoring veterans, the squadron’s goal is to inspire young people to learn about American history and aviation as well as encouraging youngsters to explore careers in science, technology, engineering and mathematics.

Between June 2-9, 30 DC-3 and C-47 planes will come together at Duxford Airfield in the United Kingdom near Cambridge and then at Caen Carpiquet Airport in Normandy,

According to the organizers of Daks Over Normandy, the June 5 commemorative flight ‘will most probably be the very last large commemoration of this historic day,’ while some of those who took part in the invasion are still alive.

D-Day: How Operation Overlord turned the tide of war in Europe

It is thought as many as 4,400 were killed in an operation Winston Churchill described as ‘undoubtedly the most complicated and difficult that has ever taken place’.