If you want to reach your 100th birthday and receive a telegram from the Queen, your best bet could be moving to Wales.

Official figures have today revealed the nation has the highest rate of centenarians across the UK.

For every 100,000 people, there are 26 who have reached the milestone in Wales, according to data released today.

In contrast, the Office for National Statistics (ONS) data shows the rate in England is 22, Scotland 17 and just 15 in Northern Ireland.

An analysis of the data showed the number of centenarians across the home nations has risen by 85 per cent over the past 15 years.

For every 100,000 people, there are 26 who have reached the milestone in Wales, according to data released today. In contrast, the Office for National Statistics (ONS) data shows the rate in England is 22, Scotland 17 and just 15 in Northern Ireland

But the total number of people aged over 100 in the UK has this year fallen for the first time in decades.

It comes as separate shock ONS figures today showed that life expectancy is stalling in England and falling across many parts of the UK.

The home nations are near the bottom of the league table of Western countries for life expectancy – behind Switzerland, Italy and New Zealand.

Statisticians say the overall increase in number of people living until they are 100 is because of improvements in mortality stretching back decades.

And they added the 2017 total ‘reflects low numbers of births during World War One, but is expected to continue to increase again from 2019’. 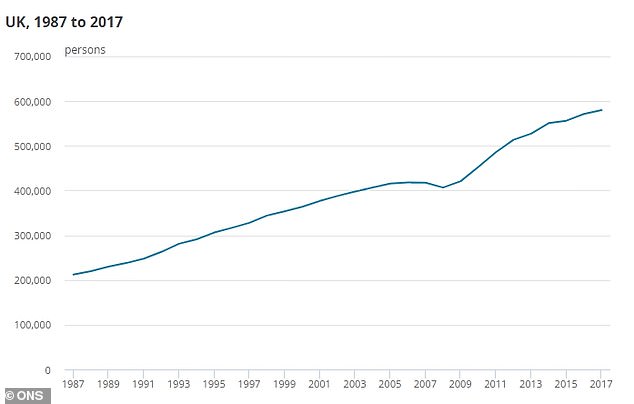 However, 2017 was the first year the total number of centenarians living in the UK had declined, down from the 14,510 recorded in 2016.

Despite the slowdown, the figures did show there were more people over the age of 105 across the home nations than ever before (860).

Many more women than men live to a very old age, with five over-100 females for every male one.

The ONS said healthier lifestyles for men meant a greater number of men survive into their nineties but the number has leveled off for women.

Nigel Coombs, of the ONS, said: ‘We are continuing to see higher numbers of people aged 90 years and over in the UK due to improvements in mortality going back many decades.

‘While we have seen growing numbers of centenarians in recent years, there has been a slight decrease between 2016 and 2017.

‘This is due to lower numbers of births during WWI. The number of centenarians is likely to increase again from 2019 in line with historic birth patterns.’

When King George V sent out the first 100th birthday congratulatory telegrams in 1917, only 24 were dispatched.

In comparison, at least 5,000 have been sent by the Queen every year since 2012 – although the rate has declined in the past four years.