Seven out of 10 homeowners who purchased a property with a partner have no legal measures in place to financially protect their share, it has been revealed.

New research by Zoopla said that a total of 68 per cent were in this position, exposing buyers to potentially losing tens of thousands of pounds should they split and need to sell the property having contributed unequal sums.

The property website claimed that 27 per cent who bought a home and then split up lost out as proceeds of the sale were not split fairly – and 72 per cent of these said that their partner received more than their fair share, or that they were not treated fairly.

The remainder – at 28 per cent – admitted that they received more than they rightfully deserved.

In the event of a break-up, most people will rely on getting their property investment back to finance their future living arrangements.

A total of 37 per cent said they had no personal savings when they split up with their partner, rising to 46 per cent for women.

Despite this, only 15 per cent said they took out a deed of trust or cohabitation agreement to protect their share, and only 10 per cent had a floating deed or commensurate share deed.

Meanwhile, a mere 7 per cent had a property break-up plan clarified as part of a prenuptial agreement.

It means 68 per cent are financially vulnerable if they break up with their partner, especially if they put in a larger share of the deposit.

A quarter – at 24 per cent – paid the entire deposit, while a further 43 per cent said they didn’t split equally.

If one partner has put more or all of the deposit, they are vulnerable to losing half that amount if the other partner has contributed to mortgage payments.

With the average deposit for a first-time buyer currently standing at £59,000, it means potentially losing out to the tune of tens of thousands of pounds.

Zoopla’s research shows that most people are aware of what a huge commitment it is to buy a property with your partner.

But there is a huge disconnect when it then comes to partners protecting their individual investments.

Buyers simply aren’t protecting themselves, with 44 per cent assuming that – because they went into the property 50/50 – they would automatically receive their fair share.

But this isn’t the case – especially if marriage or children are involved. A third at 35 per cent admitted they didn’t realise this was something they should have in place.

Meanwhile, 10 per cent admitted tackling potential break-up conversations when buying a home was just too awkward to handle, saying it didn’t feel right.

What is a Declaration of Trust?

A Declaration of Trust is a legally binding document which will show the financial arrangements and intentions agreed between joint property owners at the time of purchase.

> Read more about a declaration of trust

It appears that many couples prefer to avoid talking about break-ups altogether.

Among those who had no legal agreement in place, only 32 per cent said they settled on an informal arrangement – but these don’t hold up in law.

Instead, couples putting in unequal shares are usually told by solcitors to hold property as tenants in common, rather than joint tenants, and have a formal deed or declaration of trust drawn up, outlining what happens in the event of a sale.

Many people appear to be avoiding any kind of awkward conversation with their partner and aren’t asking each other the basic questions before taking the property plunge. 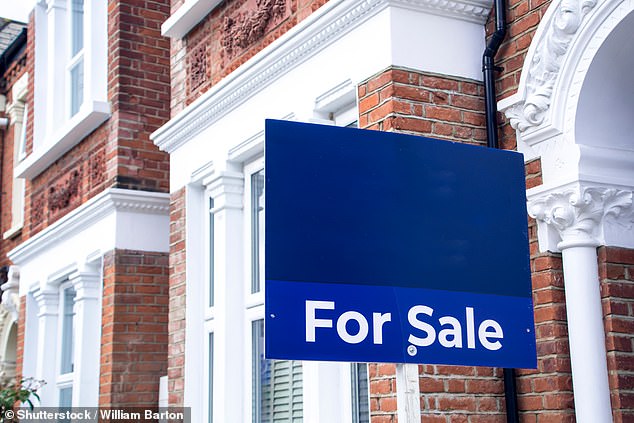 The survey found that 68 per cent are financially vulnerable if they break up with their partner, especially if they put in a larger share of the deposit

Behavioural psychologist and author Jo Hemmings said it is natural to want to avoid conversations about finances with a partner.

But she is urging couples to face the awkwardness, saying: ‘Money is always an awkward conversation to have. However, couples often end up arguing about finances because they don’t have a clear plan. It’s important to separate your feelings in your relationship from sensible, personal financial planning.

‘These conversations rarely happen unless you make a point of it, so schedule in a quiet time to have a transparent conversation about finances, such as who will pay for what and whether paying 50/50 is fair based on your earnings.

‘And most importantly, what would happen with your stake in the property if you split up. Having made key decisions regarding your finances, you will be in a much better place to get on with all the lovely parts of your relationship. And you’ll be ahead of the game in couple goals, as you’re now much less likely to argue about money – the number one issue couples row about.’

Daniel Copley, of Zoopla, said: ‘Buying a home with your partner is incredibly exciting, but the reality is that break-ups do happen.

‘It’s incredibly important that anyone making this commitment protects their investment. Otherwise, they potentially risk major financial losses in the future.

‘People may assume they’ll come to an amicable agreement, but anyone who’s experienced a messy break-up will know that fairness and reason often go out of the window.

‘If you are putting more into the deposit, you could be particularly at risk, as if your partner is contributing to mortgage payments, they could be entitled to half the home. Key conversations to have with your partner when buying a home are how you plan to split the deposit and mortgage – and ensuring this is reflected in proportion of ownership – if you’ll split maintenance costs in line with this, as well as other key finance questions such as if you have any debts.’