The launch of the new millennials discount railcard descended into chaos this morning amid a festival-style scramble for just 10,000 offered in a trial.

The Government has promised up to 4.5million Britons aged 26-30 will benefit from the cards, but the website crashed as people battled to get hold of them today.

The 10,000 railcards released by the Rail Delivery Group at about 7am on a ‘first come first served’ basis are enough for just one in 500 of the eligible population.

There are even concerns that the project could be kicked into the long grass, after the RDG refused to confirm the railcards will ever be fully rolled out across the UK.

Some frustrated millennials said on Twitter that the process was ‘worse than getting a Glastonbury ticket’ and ‘worse than waiting in the Ticketmaster queue’. 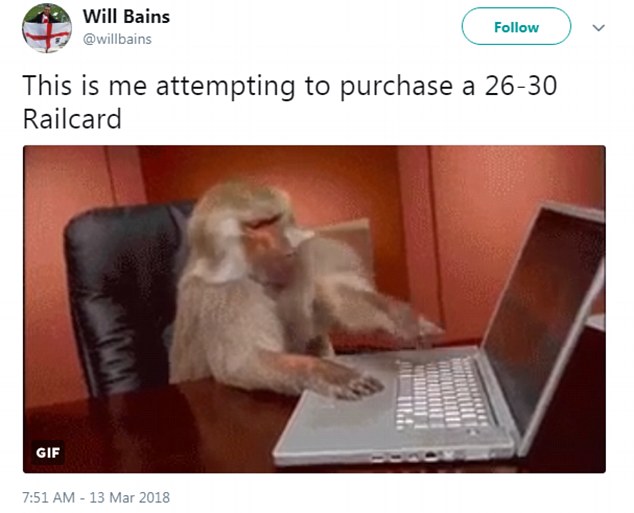 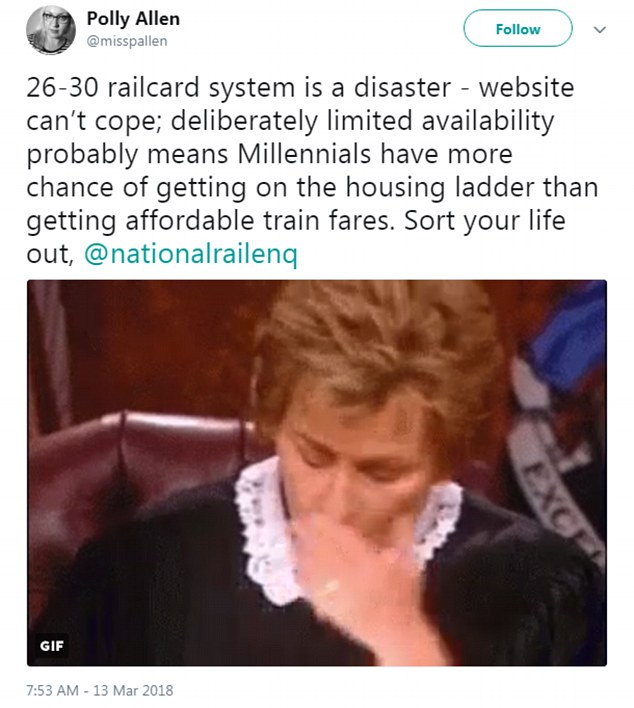 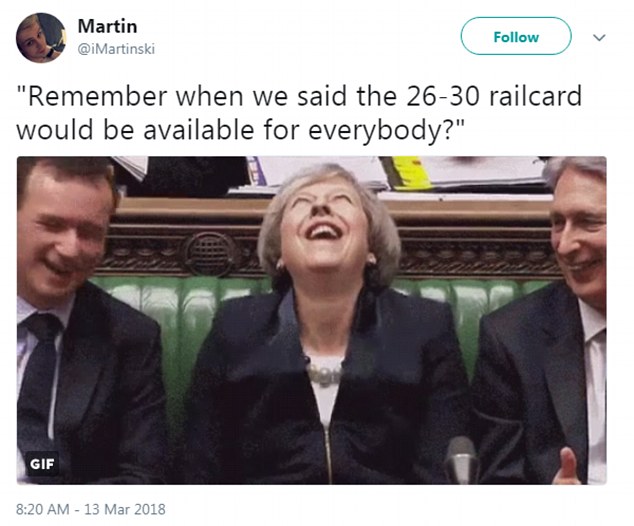 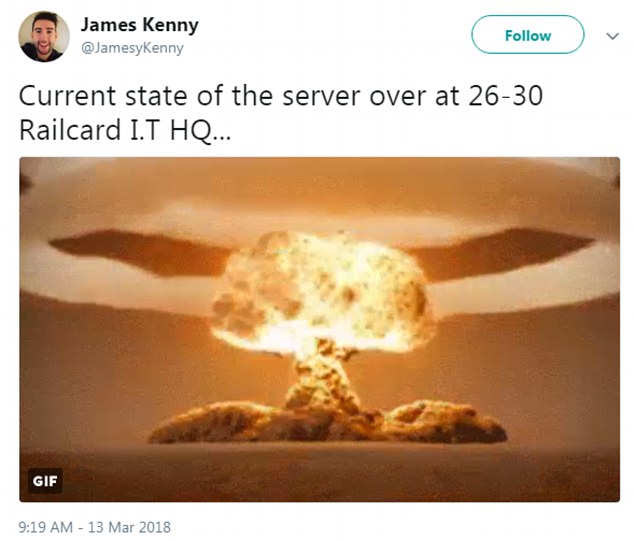 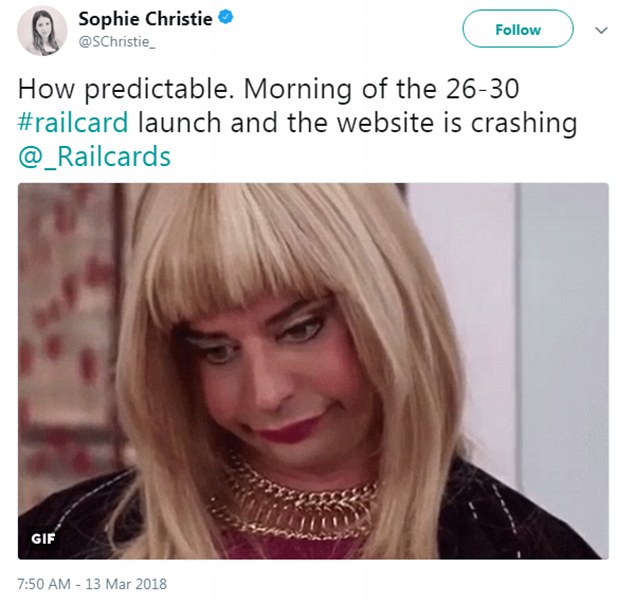 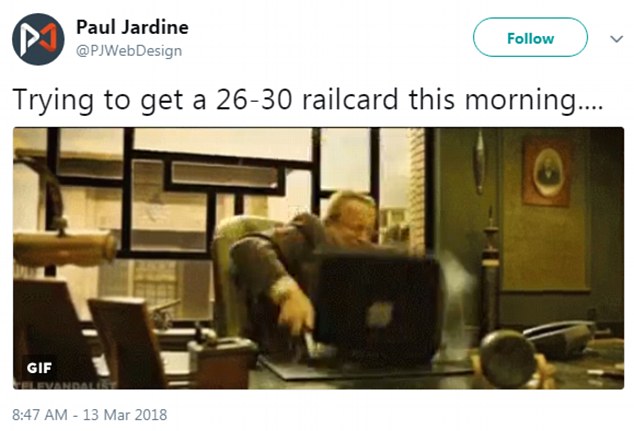 Emily Thomas from London tweeted: ‘Getting a 26-30 railcard is worse than getting a Glastonbury ticket. Sort out your website to make it fair!’

Jay Shore said: ‘Attempting to get a 26-30 railcard was a huge waste of time… the website timed out, predictably. I only made it to the ‘Eligibility’ section of the process. Blah!’

And Jonathan Meek added: ‘Absolute shambles trying to get 26-30 railcard. Website cant cope with traffic! What did they think would happen?!’

Meanwhile Alice Sophie tweeted: ‘National railcard release 26-30 today… you would imagine that everyone gets one? But only 10,000 are released! This is very very unfair. Please just release them for everyone!’

And Josh Scully tweeted Chancellor Philip Hammond to say: ‘Following the farce of the rollout of the token gesture 26-30 Railcard, I’ll successfully be applying for a Senior Railcard by the time the site actually works. 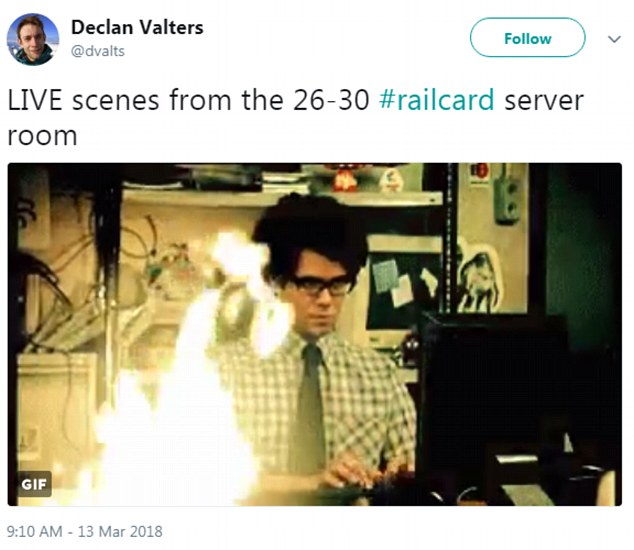 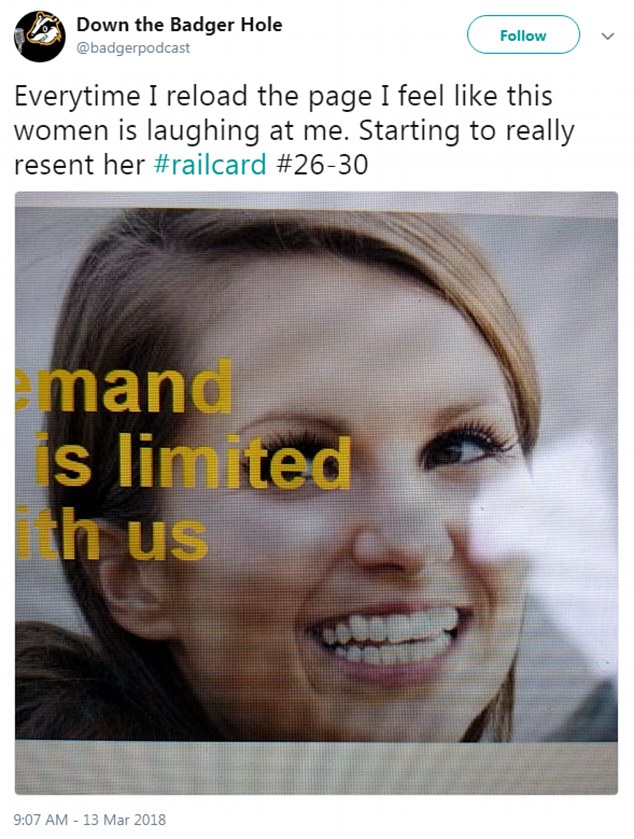 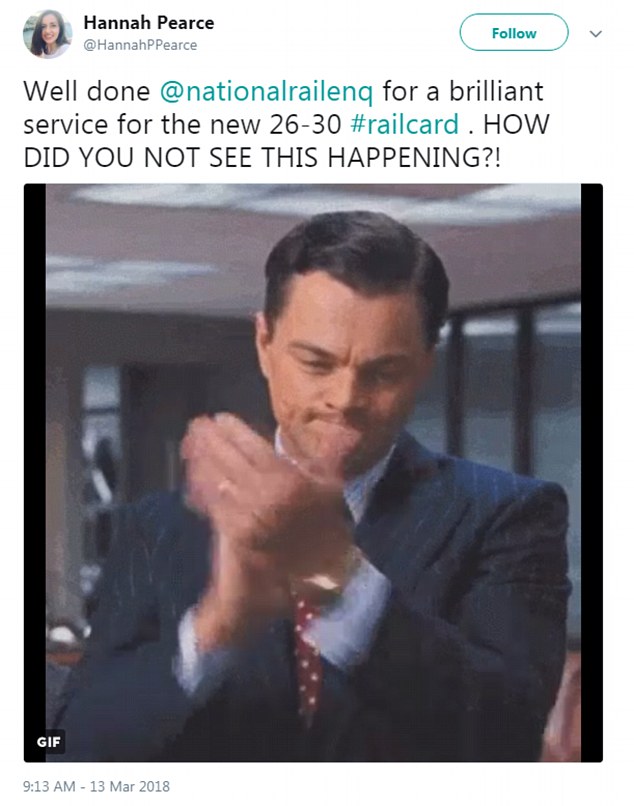 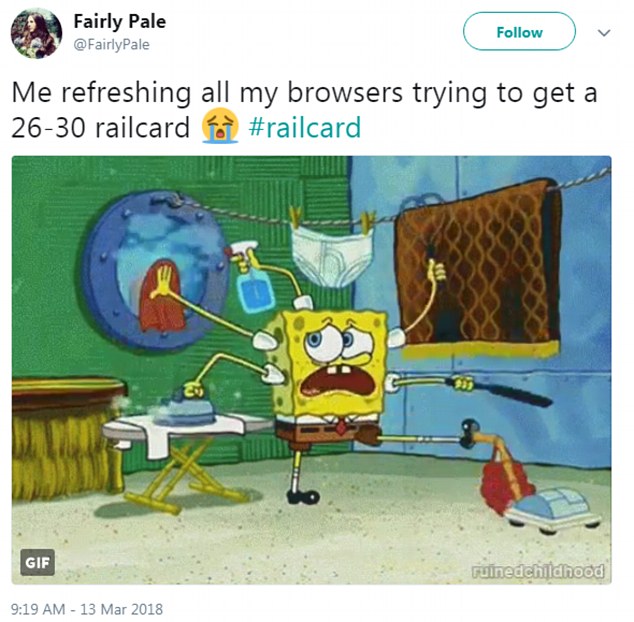 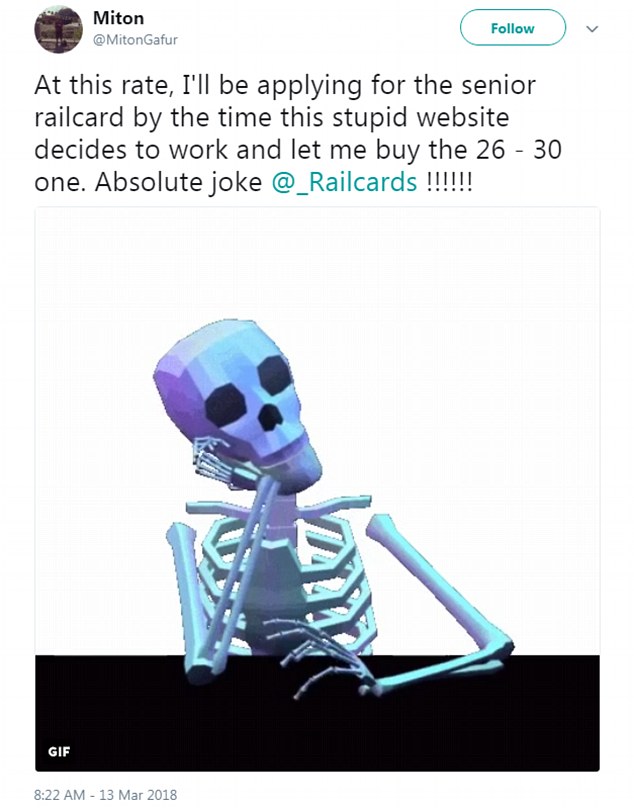 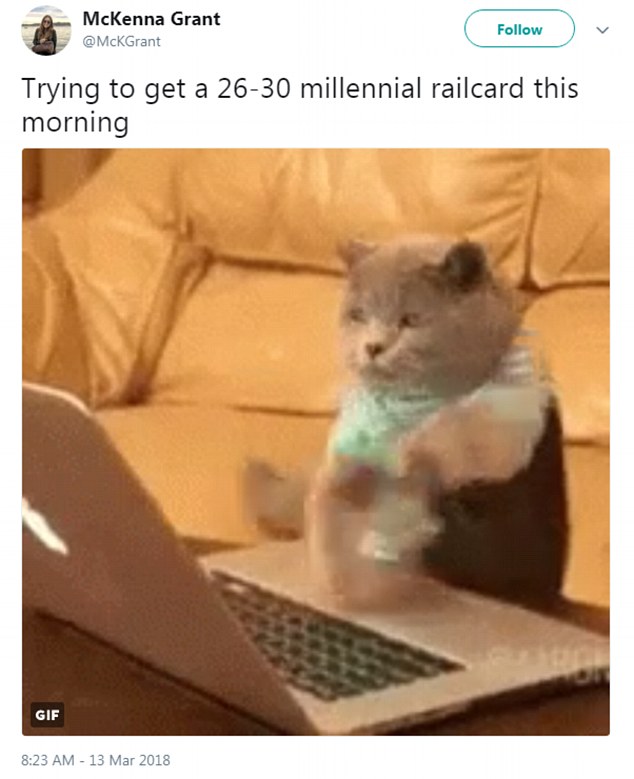 ‘Well done, Conservatives, for botching about the only decent suggestion you’ve had for young people.’

The limit on the number of 26-30 Railcards available while the scheme is trialled has been intended to assess the impact on revenue and passenger numbers.

The card, which is aimed at leisure travellers, will cost £30 each year and save passengers a third off most fares, according to the Rail Delivery Group.

There are no discounts on season tickets and there is a £12 minimum fare on all journeys between 4.30am and 10am, excluding weekends and public holidays.

It must be bought online and downloaded onto a smartphone. The card was previously only available to a limited number of people in East Anglia.

How the new 26-30 Railcards were promised for 4.5million Britons

What are the millennial rail cards?

The railcards will cost £30 each year and save passengers who are aged 26 to 30 – at the time of buying them – a third off most fares.

The card is aimed at leisure travellers, with no discounts on season tickets and a £12 minimum fare on all journeys between 4.30am and 10am, excluding weekends and public holidays.

There will be a limit on the number of 26-30 Railcards available while the scheme is trialled to assess the impact on revenue and passenger numbers.

It must be bought online and downloaded onto a smartphone. The card was previously only available to a limited number of people in East Anglia. 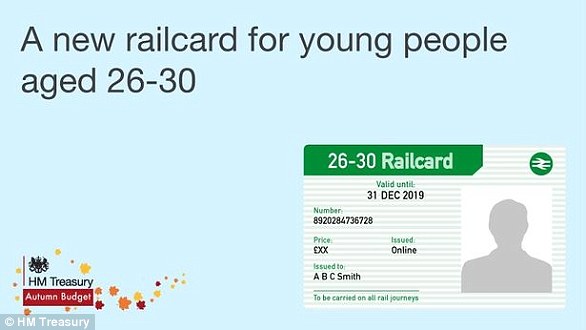 When was the concept launched?

Chancellor Philip Hammond said in his Budget speech in November that the railcards would give ‘4.5 million more young people a third off their rail fares’.

He tried to woo younger voters with the move, along with a cut in stamp duty for first-time buyers. The trial in East Anglia was launched in December.

Britons aged 26-30 will be able to buy the discount card on a first come first served basis, the Rail Delivery Group (RDG) said.

But the website crashed today as it was overwhelmed by applications for the 10,000 launched in the first national trial.

Nearly two hours after the 26-30 trial was launched at 7am, the National Railcards Twitter account said: ‘Due to the high volume of traffic the 26-30 Railcard website we understand some of you have been unable to access the 26-30 website. Railcards are still available to purchase. Please check back shortly.’

It then added: ‘We’ve had an unprecedented number of people visiting our site for the 26-30 Railcard. Please bear with us, we’ve got the whole team working on it and hope we can have it back up shortly.’

And an RDG spokesman said: ‘We’re sorry to those who have been unable to buy a trial 26-30 Railcard this morning. This is due to the exceptionally high volume of traffic on the 26-30 Railcard website.

‘We are increasing the capacity on the website to better manage the high level of traffic. Railcards are still available to purchase and people should keep checking @_Railcards Twitter and Facebook pages for updates.’ 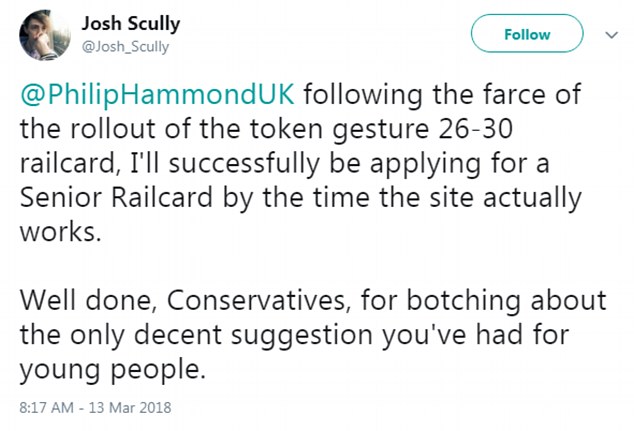 Chancellor Hammond said in his Budget speech in November that the railcards would give ‘4.5million more young people a third off their rail fares’.

There was previously no nationwide railcard available for people travelling alone between the ages of 26 and 59 unless they were disabled or in the armed forces.

The number of train journeys made in the three months to the end of 2017 fell by 0.9 per cent year-on-year, according to the Office of Rail and Road.

This was driven by an 8.1 per cent fall in season ticket usage. Passengers were hit with the largest annual fare rise in five years in January – an average of 3.4 per cent. 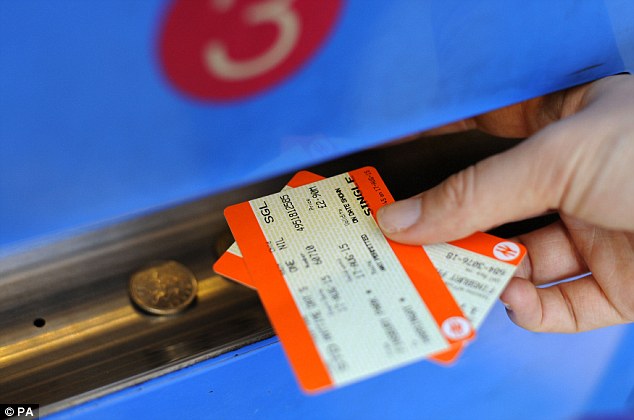 The card, which is aimed at leisure travellers, will cost £30 each year and save passengers a third off most fares, according to the Rail Delivery Group

An RDG spokesman said: ‘The trial of the 26-30 Railcard is part of the rail industry’s long-term plan to change, improve and boost communities by enabling more people to travel by train.

‘Research being gathered as part of the 26-30 Railcard trial is being used to inform discussions with the Government about a national roll-out, and to develop new products that make leisure travel easier and better value for customers.’

Anthony Smith, chief executive of independent watchdog Transport Focus, said: ‘The nationwide trial of the 26-30 Railcard is welcome news for passengers and will help take some of the sting out of rising rail fares.

‘With less than half of passengers satisfied with the value for money of their journey and even fewer young people satisfied this will help make travelling by rail that little bit more affordable for young people.’