Welsh ministers have doubled down on policing shopping trolleys during the ‘firebreak’ lockdown – but has issued a government-approved list of ‘essential’ items that can be bought.

The Welsh Government said on Tuesday it had ‘positive discussions’ with essential retailers, representative groups and trade unions over the rules.

Ministers issued an update to the list of items that can be sold in shops and supermarkets during lockdown, including cling film, bicycle pumps and birthday cards.

But they say the principle of restricting goods will remain in place until the lockdown ends – which is due to occur on November 9.

In supermarkets, 10 types of product can be sold. Food and drink is allowed, as well as products ‘ancillary to the sale of food and drink’ including disposable items used to prepare and store food such as kitchen foil and food bags.

The Welsh Government said on Tuesday it had ‘positive discussions’ with essential retailers, representative groups and trade unions over the rules 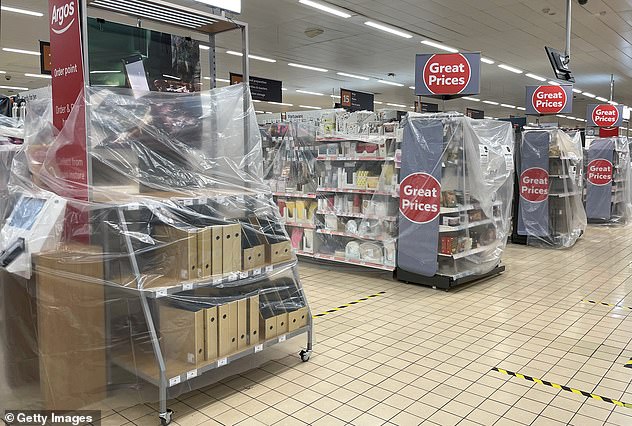 Stock covered in plastic sheeting in a Sainsbury’s store in Cardiff, Wales, on October 27 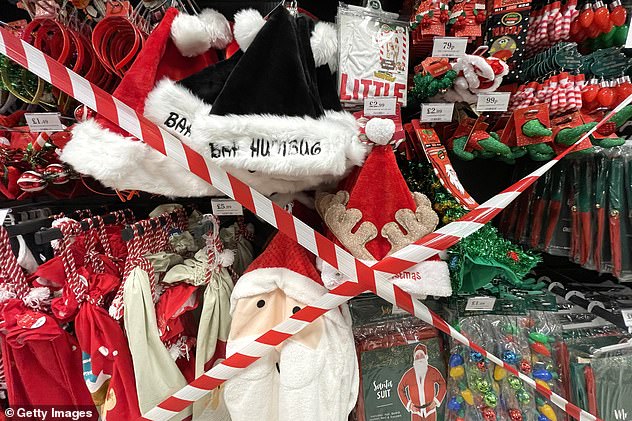 Ho ho no: Christmas items with tape across them in a Cardiff Bay Home Bargains store

Basic products necessary to prepare and eat food and drink are also able to be sold. Products for washing clothes and for cleaning and maintaining the home, including batteries, light bulbs and fuel, are allowed. 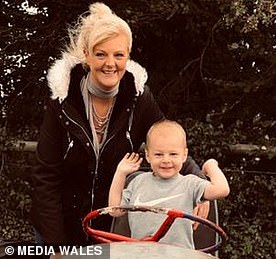 Chelsi Downes and her two-year-old son

A mother said she had not been able to buy essential toys for her autistic son due to Government rules around selling ‘non-essential’ items.

Chelsi Downes, from Culverhouse Cross, said she had been unable to take her son to the supermarket due to the stress of being unable to buy sensory toys such as Play-Doh.

Her two-year-old son Nicky has autism and is non verbal and Chelsi said he relied on toys such as the popular modelling dough to communicate.

However, Welsh Government guidelines around the sale of ‘non-essential’ items mean she has been unable to buy Play-Doh – an item she deems essential to her family – while out shopping at supermarkets.

Supermarkets in Wales have been stopped from selling ‘non-essential’ items such as clothing, homeware and toys in line with Welsh Government restrictions brought in under the fire-break lockdown which began at 6pm on Friday, October 23.

First Minister Mark Drakeford said the measure would help create an ‘equal playing field’ for other businesses which had been forced to close, but there has been some opposition to the measures, with protests in supermarkets and a petition.

The rules have changed tonight, with a new list of items that can be sold, and clarification that people can ask to buy certain items ‘by exception’. It’s not yet clear if this will allow Chelsi to buy Play-Doh for her son from now on.

Mum-of-two Chelsi believes the Welsh Government hasn’t considered the damaging effect its policy could have on children with disabilities.

‘Autistic children have very specific sensory needs. Normal items to us, things like paper, are huge for them,’ she said.

‘Every different item is a different feeling to them, it’s different senses. It really helps with development. For Nicky, Play-Doh is his way of communicating.

‘He is non-verbal and so without his sensory item he won’t do anything and can’t communicate. He won’t eat without it, he won’t sleep without it, there’s no communication there.

‘I am just so angry. This system is putting people at risk. How is my son wanting Play-Doh – something which is important for his development – considered ”non-essential” when you see some of the other things being sold.’

Supermarkets can sell toiletries and cosmetic products, including toilet rolls and sanitary products, as well as pharmaceutical products and baby products including equipment, clothes and nappies.

Newspapers and magazines are allowed, as well as stationery and greetings cards, pet food and other pet supplies, and products for the maintenance of bicycles and cars.

Earlier on Tuesday, retailers called for the ban to be relaxed to allow customers ‘to make their own decision’.

More than 67,000 people have signed a petition to the Welsh Parliament calling for the ban on non-essential items to be immediately reversed.

A spokesman said the Government had ‘clarified that a sensible system should be introduced’ in which customers can ask to buy non-essential items by exception under the regulations.

‘We are hopeful this provides a workable solution for retailers and customers,’ he said.

‘However, we cannot move away from the central principle that retailers must restrict the sale of non-essential goods for the duration of the firebreak.

‘We continue to work closely with the sector and would stress that these restrictions are in place to stop the spread of coronavirus and save lives.

‘We are asking the public to continue to support the effort by restricting unnecessary journeys and shopping.’

Groups representing supermarkets made a series of recommendations to Welsh ministers following confusion over what can and cannot be sold during the 17-day firebreak period.

In a joint statement by CBI Wales, the Welsh Retail Consortium and the Association of Convenience Stores, they called for the Welsh Government to agree to the proposals to ‘resolve the confusion’.

‘We recommend the individual customer is trusted to make their own decision as to whether a product is non-essential or not, taking into account the notices displayed throughout the store and their immediate needs,’ they said.

‘If the customer goes ahead with the purchase of the item the final liability ought to rest with the customer.’

It said this would mean non-essential items were not removed from shelves or cordoned off.

Large notices would instead be placed in front of the products and in communal spaces informing shoppers of the Welsh Government’s regulations.

In-store announcements and social media messaging could be used to advise customers to put off buying non-essential items, the statement suggested.

On Monday, Wales’ Health Minister Vaughan Gething said it would be made clear that supermarkets could use their own discretion to sell non-essential items to those ‘in genuine need’.

He told a press conference he was ‘very saddened’ to hear of an exchange involving Tesco on Twitter, in which it was wrongly suggested that sanitary products were non-essential and could not be sold.

It later emerged that an aisle selling the items at one store in Cardiff had been cordoned off to allow for a police investigation following a burglary.

The Welsh Government has said the rules are both about limiting transmission of coronavirus as well as being fair to non-essential retailers who have had to close during the firebreak. 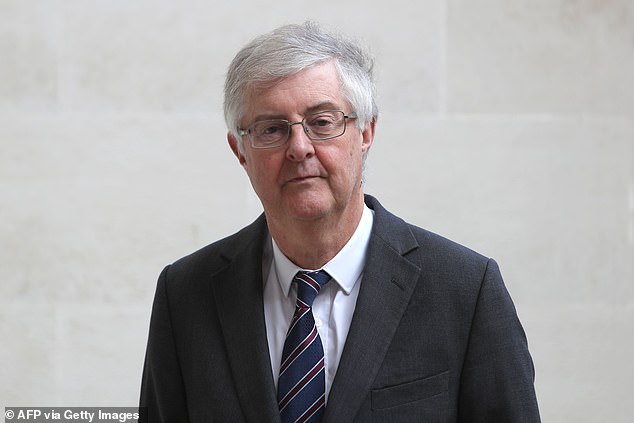 The Welsh Government has said the rules are both about limiting transmission of coronavirus as well as being fair to non-essential retailers who have had to close during the firebreak (pictured: Wales’s First Minister Mark Drakeford) 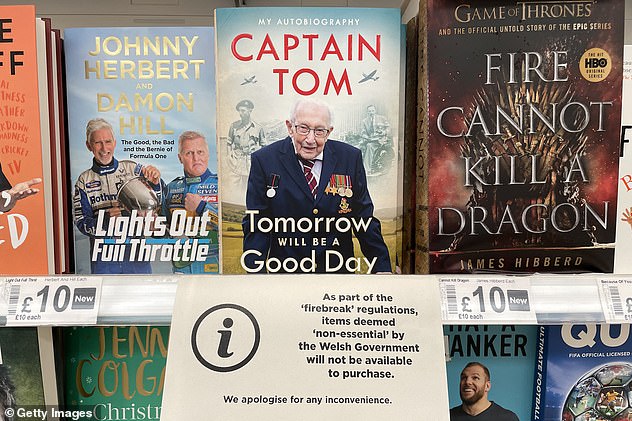 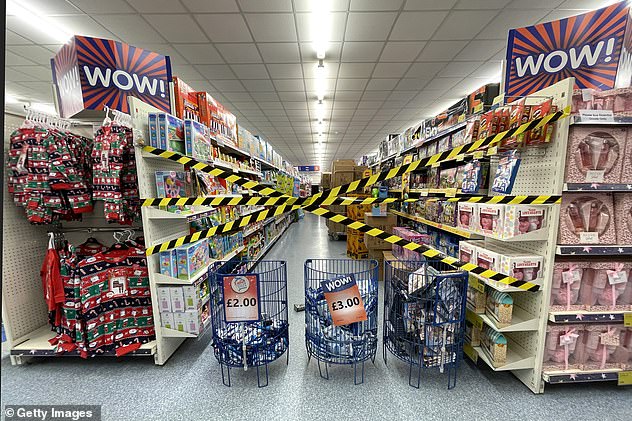 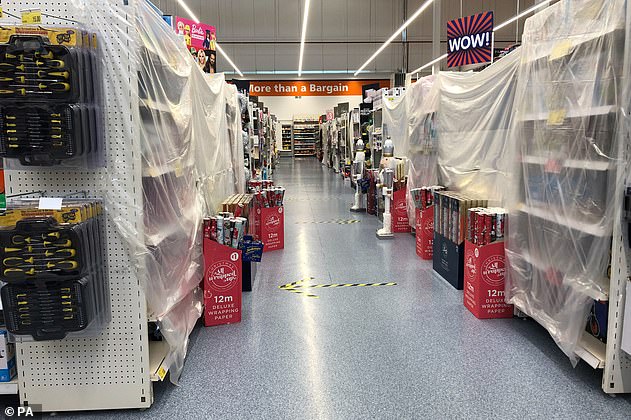 Under the firebreak lockdown, which began at 6pm on Friday, non-essential retail including clothes shops, furniture stores and car dealerships are closed.

Shops selling multiple types of product can stay open but can only sell essential items.

On Tuesday, a further 1,207 people tested positive for coronavirus, bringing the total number of confirmed cases in the country to 45,046.

Public Health Wales said seven people with Covid-19 had died, with the total number of deaths since the beginning of the pandemic rising to 1,790.