‘I hope to show that it fits me well’: Chelsea new boy Werner promises to live up to his ‘Turbo Timo’ nickname as £53m striker aims to terrorise Premier League defences

Timo Werner has pledged to live up to his new nickname at Chelsea.

The Germany striker admitted he was still trying on ‘Turbo Timo’ for size, but insisted he would make the moniker fit – by terrorising Premier League defences with his pace.

The £53million hitman honed his high-sprint speeds through hill running with his dad as a youngster, before sharpening his deadly running angles under Julian Nagelsmann at RB Leipzig.

Now the 24-year-old is ready to turn on the afterburners under Frank Lampard in west London, with his Stamford Bridge debut fast approaching against Liverpool on Sunday.

‘I only just heard that nickname moments ago; Turbo Timo is not the worst,’ said Werner. ‘I was a little bit surprised by it, but I hope to show that it fits me well.

‘Being fast helps give me opportunities to score goals, create chances for the team and other players.

‘My father knew I was fast and wanted me to get stronger; he let me run some hills. It’s really helped me a lot, it’s given me a way to work hard.

‘In Leipzig I learned a lot from the manager, on how to improve in different positions. But it was the right time to try something new, out of Germany, to try the Premier League.

‘It’s such a great league, with a lot of massive defenders, strong defenders. It is the point where I want the next challenge.’ 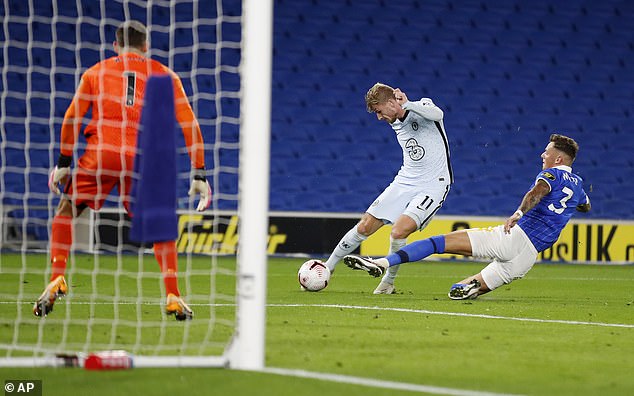 Werner has shaken off a dead leg to be fit to face Liverpool on Sunday, with Chelsea boss Lampard tipping the savvy striker to cause the Reds problems in west London.

Werner admitted after his top-flight debut at Brighton to being surprised by the physical size of Premier League defences, but Lampard said that honesty will stand him in good stead for making the grade in England. 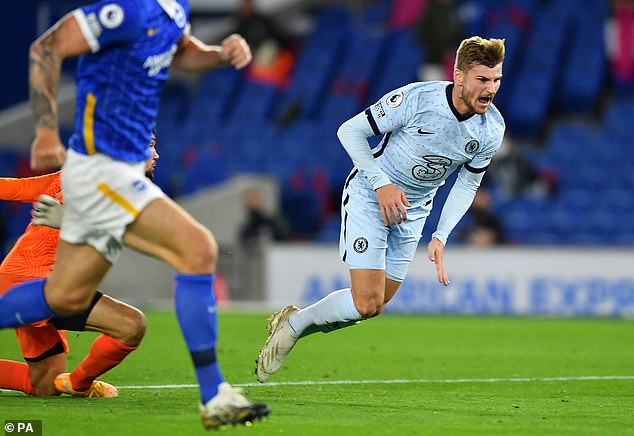 ‘I loved his statements afterwards and it follows on from the Timo Werner I spoke to when he signed and the way he’s been since he started working here,’ said Lampard.

‘He’s an incredibly-talented player. He is robust, so I’ve no doubt he can handle the Premier League and the size of the opposition.

‘And he’s very low maintenance. He comes in, he trains, he works hard, he lives right and he wants to come here and be a success.

‘All the players coming from foreign leagues have to be given some time to adjust to the league. I’m confident they will adjust quickly. We’ll work towards that.

‘I’d like to see Timo up against what is a fantastic defence, Liverpool at the weekend. I’ve no worries of how he will approach it, in terms of the size or speed or strength or Liverpool. I’m sure Timo will back himself and give everything.’