What is slapped cheek syndrome?

But official figures this year have repeatedly shown that cases of scarlet fever are continuing to soar across England and Wales.

Scientists believe cases are at the highest levels since the 1960s – and a fall in living standards has taken the brunt of the blame.

Public Health England last week called for parents to be aware of the contagious infection and to look out for signs of scarlet fever.

However, many are unaware of other infections, such as slapped cheek syndrome, that can lead to the tell-tale rash assumed to be scarlet fever.

Public Health England chiefs last week again called for parents to be aware of the contagious infection and to look out for signs of scarlet fever. However, many are unaware of other infections, such as slapped cheek syndrome, that can lead to the tell-tale rash

What is slapped cheek syndrome?

The four symptoms of the bug, which is usually mild, can also be present in children struck down with scarlet fever.

Slapped cheek syndrome then leads to a red rash on the cheeks that can spread across the body, according to NHS Choices.

The viral infection is caused by the parvovirus B19 strain. It is spread in similar ways to the flu, through droplets spread in coughs and sneezes.

But by the time the hallmark rash appears the bug is no longer contagious, the NHS states on its information website.

The bug, which can also strike adults and pose a much bigger threat, usually clears up within three weeks.

What is the treatment?

There is no vaccine and parents are told there is no often no need to see the GP for slapped cheek syndrome.

Instead, they are advised to allow their child to rest, give them plenty of fluids, take paracetamol or ibuprofen and use moisturisers for itchy skin. 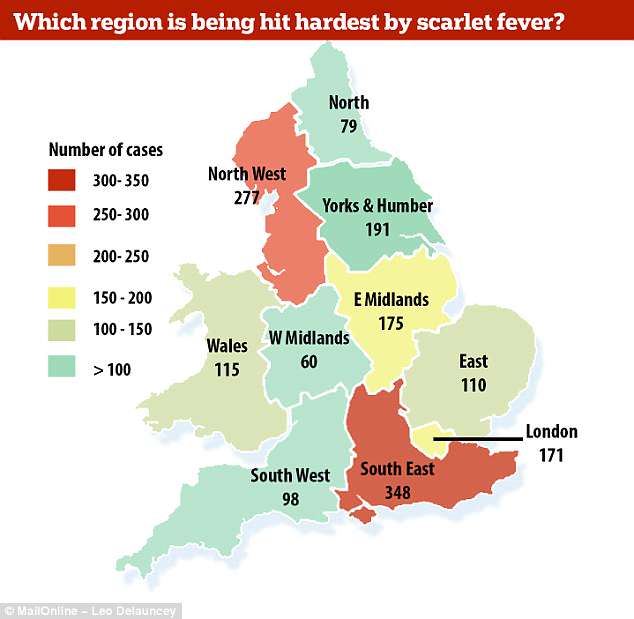 The alert over slapped cheek syndrome comes after MailOnline reported on PHE statistics last week that showed the spread of scarlet fever.

The Government-run agency’s data showed 15,549 have been struck down by the ‘Victorian’ infection so far this year.

This is almost double the 8,728 cases in the first 13 weeks of 2016, considered the worst year for scarlet fever in five decades.

Data showed there were 1,624 cases of scarlet fever recorded in the week ending April 1.

The South East region of England was hit the hardest during the seven days – with 348 cases of the potentially fatal bug recorded.

Some 277 cases of scarlet fever were noted in the North West and 191 in Yorkshire and the Humber, the statistics also revealed.

At the other end of the scale, just 60 cases of scarlet fever were recorded in the West Midlands and 79 in the North East.

Nick Phin, deputy director of National Infection Service at PHE, claimed cases had not been this high in more than three decades.

He said: ‘The numbers we have seen this year have not been seen since 1982 when PHE took over responsibility for collecting data on notifiable diseases.

What is scarlet fever and what are the symptoms to look out for?

Scarlet fever is a bacterial illness that mainly affects children. It causes a distinctive pink-red rash.

The illness is caused by Streptococcus pyogenes bacteria, which are found on the skin and in the throat.

First symptoms of scarlet fever include a sore throat and fever which may be accompanied by a headache, nausea and vomiting.

Between 12 to 48 hours after this, a characteristic fine, sandpapery rash develops, often appearing first on the chest or stomach.

Other symptoms include a white coating on the tongue, which peels a few days later leaving the tongue red and swollen (this is known as strawberry tongue).

Cases are more common in children although adults of all ages can also develop scarlet fever.

Individuals who think they or their child may have scarlet fever should consult their GP.

‘It is important to be aware that, with treatment, scarlet fever is not usually a serious illness. The antibiotics used to treat the infection reduce the risk of spread to others.’

Mr Phin added that ‘it is not uncommon to see a rise in cases of scarlet fever at this time of year’ but PHE is ‘monitoring the situation closely’.

However, a study published in the prestigious medical journal The Lancet back in November suggested cases are the highest in 50 years.

Scarlet fever is most common in children under 10. It causes a sore throat, fever and rash which can occasionally lead to pneumonia.

It was a very common infection in the Victorian era – and far more deadly – but cases dramatically reduced, partly due to better hygiene.

If treated promptly, the disease is restricted to no more than unpleasant symptoms.

However, it was a death sentence for hundreds of thousands in the late 1800s and early 1900s.

Cases have been on the up since 2014, but officials have yet been able to pinpoint why they have shot up in the past three years.