What REALLY happens when you shut the front door

When you lock the front door you hope to return to find everything exactly as it was, however, you can never be sure what happens while you’re out.

Captured on home surveillance camera, Nest Cam, this series of real-life videos document the shocking things that people never knew went on while they were out.

From naughty pets destroying furniture, and cats falling into ponds, to natural disasters and even burglars caught red handed – these videos may just have you setting up the web cam.

While the majority of pooches prefer to nap while their owners are out Brodie the Bulldog prefers to be a little more active. 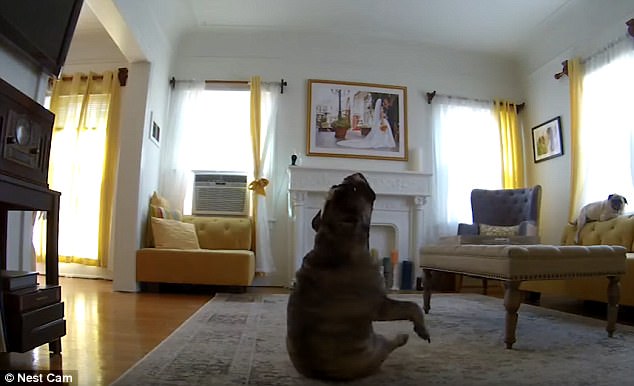 This hilarious clip captures the mutt having a boogie on his human’s rather plush looking rug.

Meanwhile his pal, a pug, watches on in amazement as Brodie performs his precarious moves for an entire minute.

While many of the videos capture the light-hearted antics of animals this clip sees the terrifying moment a tornado strikes a home in Texas. 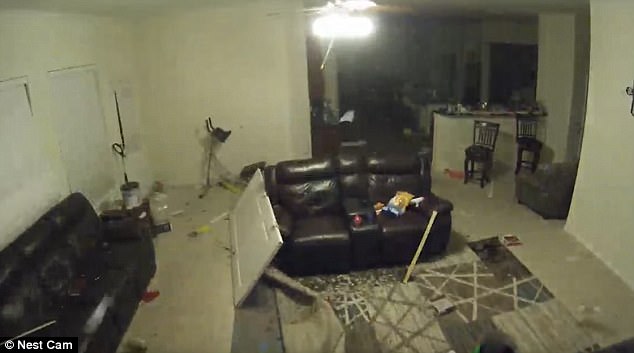 The serene living room scene is quickly ripped apart as the howling gale sweeps through the home, taking out various possessions.

Furniture is completely knocked over while the front door is ripped from its hinges and taken across the room.

Not all the footage is taken from the inside the home with this amusing clip capturing a person’s garden. 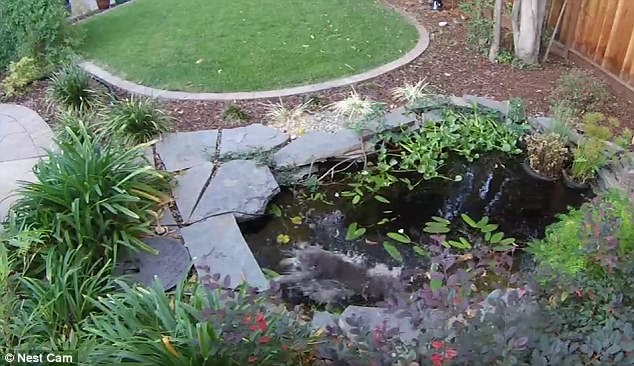 A mischievous cat lurks in the bushes of the back yard waiting to pounce upon an unsuspecting pigeon.

But as the bird approaches the kitty leans a little too far and ends up a rather soggy moggy after falling in the pond.

It is normal for there to be certain areas in the home that a dog is restricted from, a baby’s room included.

However, this funny video sees the moment an opportunistic mutt sneaks into the nursery to get a taste of what he’s missing. 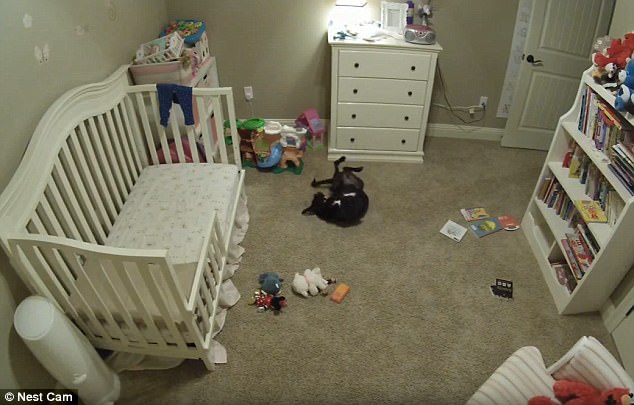 It’s not just dogs that need exercise as this rather energetic cat proves.

Aware of her cat’s wired behaviour this pet-owner has installed what can only be described as a giant hamster wheel in her front room – much to her moggy’s delight.

The feline can be seen going for a spin, however, her less enthusiastic can be seen sitting it out on the work top. 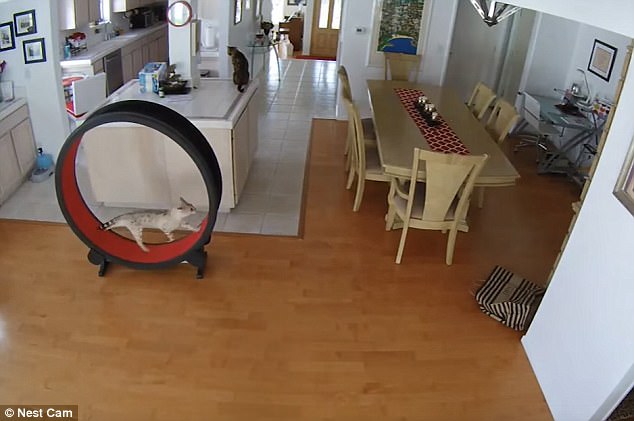 CAUGHT IN THE ACT

It is every homeowners worst nightmare to come home and discover that they have had a break in.

However, thanks to their surveillance system this woman was able to intervene.

After calming her dogs two burglars attempt to make off with her possessions – but by using the microphone fitted in the camera she warned the pair to leave – which they immediately did. 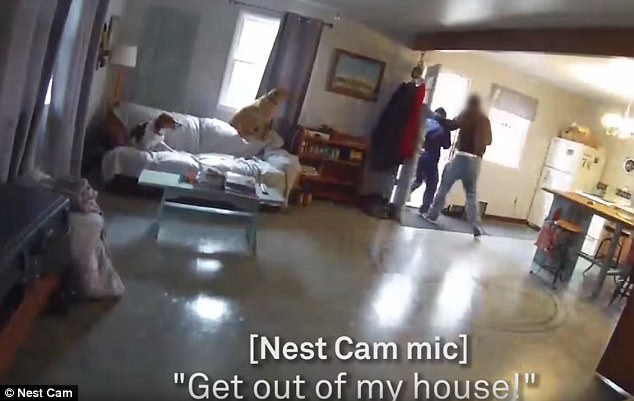 Most owners would expect their pooches to spend the day awaiting their return, however, this dog has other ideas.

As soon as his owner closes the door the adorable pooch can be seen rolling around on the sofas in delight at having the home to himself. 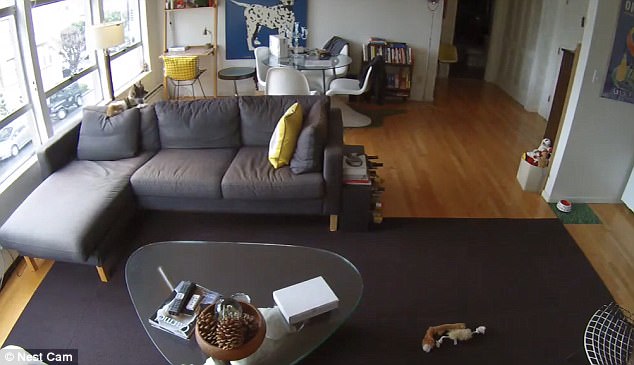 THE DOG THAT STOLE CHRISTMAS

The sight of the glowing fairy lights on the Christmas tree proved too tempting for Murray the dog not to meddle with.

The pooch can be seen using the lights as a chew toy, however, he was not expecting the tree to put up a fight giving him the fright of his life as it tumbles to the ground.

The terrified animal spends the remainder of the video hiding from the tree from the comfort of under the sofa. 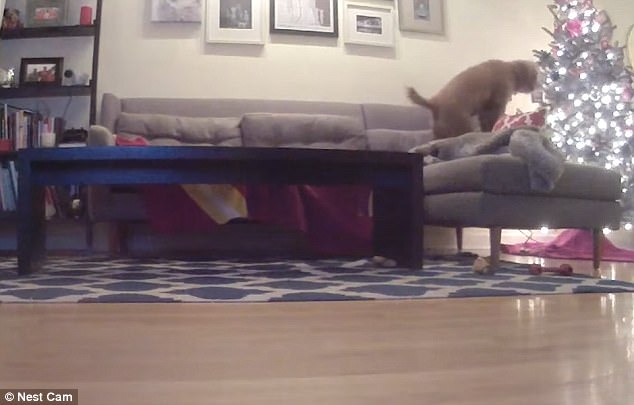 SOMEONE NEEDS A WALK

This owner was always left slightly baffled as to why her furniture was rearranged each time she came home, however, her camera was able to put a stop to her questions.

Her Doberman, Flanders, can be seen whizzing around her living room as a way to exert some of his energy.

The happy hound can be seen leaping from sofa to sofa and performing laps of the room – showing no signs of settling down. 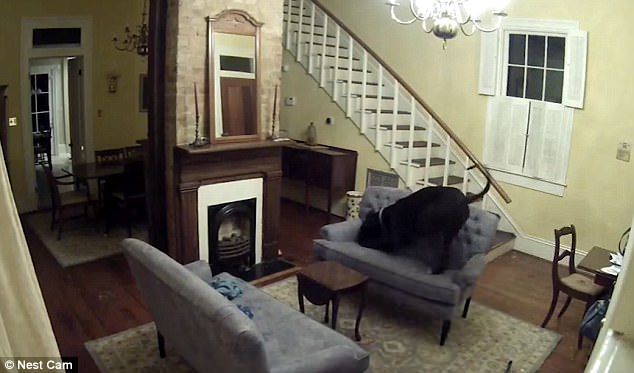