Wheelchair-bound teen ‘devastated’ after being refused access to Brisbane flight

A wheelchair-bound teenager has been left devastated after he was refused access to a Jetstar flight because the lift allowing disabled access to the tarmac was broken.

Rosie Ryan was due to fly to Brisbane from Sydney with her 13-year-old son Cormac for a medical appointment.

She said she told the airline beforehand that he would be travelling in a manual wheelchair and needed assistance getting onto the plane.

But upon arrival at the boarding gate the mother and son were told by staff they couldn’t board the flight because the lift was out of order.

Ms Ryan said she pleaded with the airline’s ground staff to let them on the plane as they had an appointment to make – and even offered to carry her 30kg son up the stairs.

‘I said I would sign a waiver, anything! I know for a fact that if there is a fire, Cormac is crawling down those stairs so why can’t he do that now?’ she wrote in a Facebook post criticising the airline.

‘We woke up probably two hours before everyone else to get on the same 8.30am flight.’

Ms Ryan said she also offered to sign a waiver form which would remove liability for Jetstar, but was told she and her son would have to wait for another flight.

‘I know my capabilities and I know that I’m able to crawl down stairs without getting hurt,’ Cormac told 7News.

Ms Ryan and Cormac eventually made their way to Brisbane on a Qantas flight, but the youngster said he was already feeling anxious about returning to Sydney on Thursday. 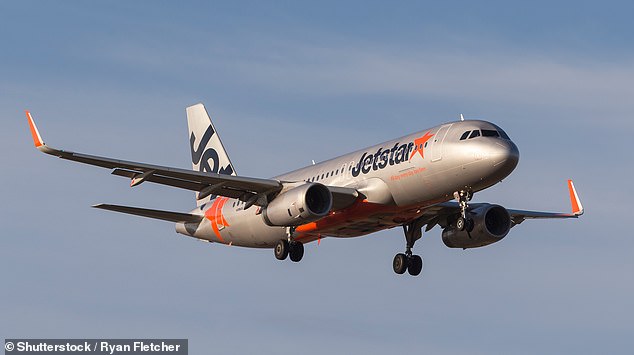 ‘At this time there’s so few flights and there’s not a lot of options,’ his mother said.

Jetstar said the lift was out of their control and operated by the airport.

Sydney Airport said in a statement though they have since informed Jetstar there are other ways to move people with mobility issues onto the tarmac if the lift is broken.