Which stocks are most exposed to summer of strikes and staff shortages?

Many companies are struggling to appease disgruntled workforces amid mounting inflation and pressure for higher pay.

Even if staff are not outright threatening industrial action, firms are finding it harder to recruit people or retain them if wages – or sometimes simply work conditions – look more attractive elsewhere.

Investing experts give their take on the impact of workforce strife and tips on the stocks most and least affected below.

Industrial strife: Royal Mail staff have voted for a national strike by a large majority

‘Between industrial action and labour market pressures, a number of companies have been in the news over the last few months for their relationship with their people,’ says Rob Burgeman, senior investment manager at wealth manager Brewin Dolphin.

‘Airlines have had to cancel flights because of staff shortages and train services across the UK have been hit by strikes, while competition for people is forcing many employers to increase wages.’

All these pressures are making life difficult for a number of companies, and this is reflected in their share prices this year, says Burgeman.

Richard Hunter, head of markets at online broker Interactive Investor, says: ‘Staff are integral to virtually every business, and while relations are smooth, the company can continue with its strategy.

‘At times of stress, however, and when the relationship breaks down, this can have an impact on the share price performance.

‘This is particularly of note at present, as a tight labour market affords some of the workforce more flexibility in moving on to pastures new.’

Which stocks are exposed to strikes or staff shortages? 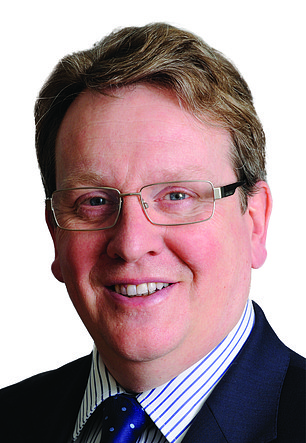 Rob Burgeman: Competition for people is forcing many employers to increase wages

Royal Mail: ‘Royal Mail is a people-heavy business and, with union membership relatively high among its staff, it is always prone to strike action – as recent events show,’ says Burgeman.

‘The company was a winner during the pandemic, but has seen its share price more or less halve since the beginning of 2022.’

Hunter notes: ‘In a recent – and frank – trading update, Royal Mail bemoaned the effect the action was having as it was hampering progress on its much-needed transformation programme.

‘Management was forced to take its eye off the ball in implementing its strategy.’

He says wider factors are at play such as increased competition in the parcels sector, but adds that a 45 per cent decline in the share price over the past year has resulted in the company’s relegation from the FTSE 100.

Laith Khalaf, head of investment analysis at investment broker AJ Bell, says industrial action has been a long running issue at Royal Mail that has raised its head again.

‘Part of the problem facing businesses is a lack of available workers, but feeding into the mix is that existing staff are unhappy with the pay rises they are receiving in the face of eye-watering rates of inflation, and neither of these issues looks like going away anytime soon,’ he says.

B&M: ‘You would typically expect the discount store to be a beneficiary of a downturn, with more shoppers trading down to save money,’ says Burgeman.

‘But, up against the likes of Aldi and Lidl, B&M has had to contend with increasing wages and logistics costs, and it doesn’t have a great ability to pass this on to its customer base.’

He notes the shares are down more than 32 per cent this year.

JD Wetherspoon: Burgeman says the pub sector has been badly hit by inflation fears over the past six months, and JD Wetherspoon shares are down 42 per cent since January and even lower than at the height of the pandemic.

‘The group highlighted staffing shortages in its October update and, with the labour market continuing to be tight, this only looks like remaining a challenge alongside other rising costs.’

Greggs:  ‘The bakery chain is another company that warned about staff shortages in October and the shares are down more than 38 per cent in the year to date,’ says Burgeman.

‘However, Greggs is a strong business and has a knack for weathering difficult periods like the one we are currently going through.’

EasyJet: ‘Airlines had to let a lot of staff go during the worst of the pandemic and now, with demand for travel rebounding, operating at that level again has been a challenge,’ says Burgeman.

‘EasyJet had to cancel hundreds of flights and has been one of the worst affected by staffing shortages. People issues combined with high fuel costs has seen the company’s share price has fall around 34 per cent this year.’

Khalaf says UK job vacancies are at a record high, putting pressure on businesses recruiting staff across the whole economy, but certain sectors and companies are especially feeling the pinch.

‘Airlines have clearly been hit by staffing problems after trying to return to a full roster of flying after the pandemic, both within the airlines themselves and amongst the businesses that provide support services at airports,’ he points out.

‘We can expect this to make a dent in the summer profitability of the likes of IAG, Ryanair and EasyJet, as flights are cancelled and passengers are needing to be compensated.’

Boohoo: ‘A recent example of the maltreatment of staff having an impact both on price and reputation is Boohoo,’ says Hunter.

‘The company was castigated for working conditions at some of its factories within the supply chain, and was reprimanded by the authorities, leading it to introduce an “Agenda for Change” programme.

‘However, along with wider pressures surrounding the retail sector, the shares plunged 85 per cent from a peak of 415p in June 2020 to currently stand at around 65p.

>>>Which stocks are likely to remain resilient to labour pressures?

RELX: This is an information and analytics firm that owns publications in the scientific, medical, and legal sectors, says Burgeman.

‘Its business is built on data and, therefore, the company is relatively resistant to labour-related pressures. The shares are up 2 per cent in 2022 and 14 per cent on where they were a year ago.’

SSE: It employs a lot of people as one of the largest UK utility groups, but sold off its retail division so is now more about the quality of its tangible assets and infrastructure, according to Burgeman.

‘It is less economically sensitive and is closely tied to the wider adoption of renewables.’

Experian: The company provides credit scores, and Burgeman says: ‘As a growth stock, it has been hit relatively hard by the sell-off that has affected these kinds of companies over the last seven months and its shares are down 21 per cent.

‘However, the longer-term picture is much more positive and its tech-based business model is highly scalable [easily adaptable and able to grow].’

Diageo: ‘People like a drink whether they are celebrating or commiserating and, as the group behind Guinness, Smirnoff, and a host of other well-known brands, Diageo tends to be a beneficiary,’ says Burgeman.

‘Although down 5 per cent in the year to date – which comes from fears over rising input costs – the company is well positioned for future growth and its products are market-leading.’

Greencoat UK Wind: This investment trust owns 43 wind farms, and Burgeman says it is essentially a ‘pure play’ on the adoption and increasing value of renewable energy, with ‘tangible assets that should go up with inflation’.

‘The dividend also goes up in line with the retail price index, meaning the real value of income should remain protected. The shares are up 7.6 per cent in the year to date, despite market volatility.’

Amazon: ‘Unfortunately, there are also occasions when staff discontent can have limited impact,’ says Hunter.

‘Amazon’s UK retailing operation has led to whistleblowing calls of staff being treated like ‘slaves’ and ‘robots’, but given the sheer scale of the company’s wider technology presence and aspirations, such calls have had limited impact on the share price.’

Ocado: ‘In terms of robots, high tech firms could yet benefit from a streamlining of processes which requires little human intervention,’ says Hunter.

‘At Ocado, for example, its increasingly famous robotic grids which automatically pack groceries for other retailers has clear potential, even though progress has been slower than the market would have liked.’

‘Even so, these further tech innovations continue to keep the ‘Ocado Smart Platform’ ahead of the game, such as moderations to the bots and grids which should reduce capital expenditure in future site fit-outs by 15 per cent, thus boosting margins and ultimately profits.’