White House turns Roseanne saga into an attack on critics

The White House complained Wednesday that if ABC owed former Barack Obama confidante Valerie Jarrett an apology for Roseanne Barr’s racist tweets, President Donald Trump should expect at least as much for enduring an endless barrage of vulgarity from his televised critics.

‘The president is merely calling out media bias. No one is defending what [Roseanne] said,’ she said her press briefing Wednesday afternoon.

The White House is arguing if ABC apologized to Valerie Jarrett for Roseanne Barr’s tweets then President Trump deserves an apology for media bias against him. 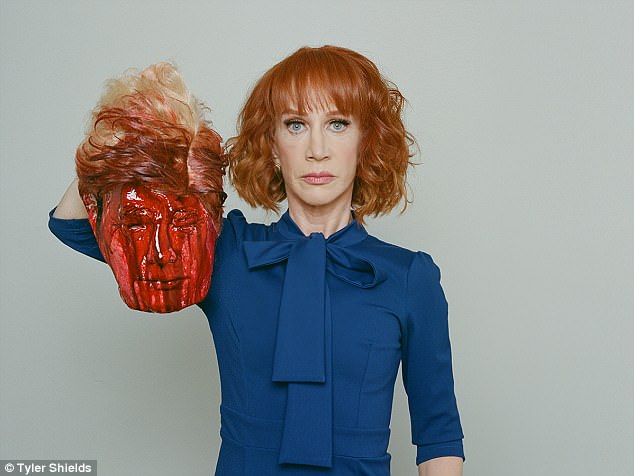 The White House pointed to this photo of Kathy Griffin holding a severed head of Donald Trump that was shown on ABC’s morning show ‘The View.’ 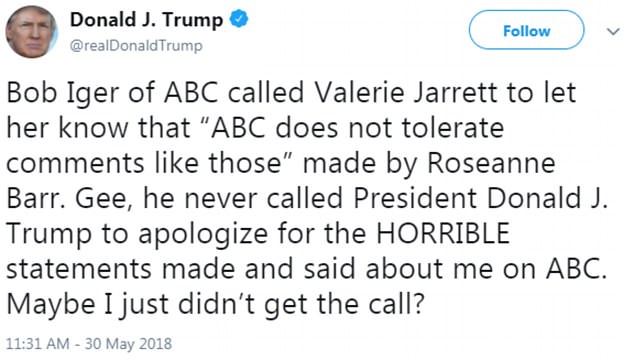 President Tump weighed in on the Roseanne Barr controversy with a tweet Wednesday.

Trump weighed in on the controversy Wednesday, complaining in a tweet that he never got an apology from ABC for the ‘for the HORRIBLE statements made and said about me on ABC’ and calling out Disney CEO Bob Iger.

Sanders expanded on what the president was angry about in a rant that called out ESPN anchor Jemele Hill calling Trump a white supremacist, complaining of comments made on ABC’s daytime talk show ‘The View,’ and slamming ESPN for hiring Keith Olbermann, who regularly tweets criticism of Trump.

ABC News and ESPN are owned by the same parent company, Disney.

‘Where was the Bob Iger’s apology to the White House staff for Jemele Hill calling the president and anyone associated with him a white supremacist? To Christians around the world for Joy Behar calling Christianity a mental illness? Where was the apology for Kathy Griffin going on a profane rant against the president on “The View” after a photo showed her holding President Trump’s decapitated head?’ Sanders asked.

‘And where was the apology from Bob Iger for ESPN hiring Keith Olbermann after his numerous explicative laced tweets attacking the president, calling him a Nazi, and even expanding Olbermann’s role after that attack against the president’s family. This is a double standard he is speaking about. No one is defending her comments. They’re inappropriate but was the point he was making.’

After Trump won the election, Olbermann began a series of web shorts titled “The Resistance,” saying he would “take on the responsibility of the resistance. I, with complete awareness of the presumptuousness and arrogance of this statement, volunteer myself.”

Olbermann is known for his liberal views. Last week ESPN announced he was returning to the airwaves for his sixth stint at the network. He regularly refers to Trump as a Nazi in his tweets.

Griffin apologized for a photo of her shown on ‘The View’ holding a bloody, decapitated head of the president. She later took the apology back. Asked if she took the photo too far, she said: ‘No, not now. Not when I see his policies.’

Hill voluntarily left her role as a co-anchor of ESPN’s SportsCenter, to work on ESPN’s Undefeated, an online vertical focused on race, sports, and culture. ESPN disavowed her tweets on the president.

Behar publicly apologized in May for mocking Vice President Mike Pence’s Christian faith and suggesting that his religious views made him mentally ill. She had said of Pence: ‘It’s one thing to talk to Jesus. It’s another thing when Jesus talks to you. That’s called mental illness.’

ABC said Tuesday that it was cancelling Barr’s television show just hours after the comedian attacked Jarrett on Twitter.

Sanders said, in response to questions, that the president has not spoken to Barr since her firing and that no one at the White House has reached out to Iger.

Sanders also complained about the lack of press coverage of the president’s bill signing on Wednesday, legislation to give patients the right to try medication that could actually save their lives.

“I’d point out that while the President signed that legislation and actually addressed America, two networks chose not to cover it, and instead covered something totally different in palace intrigue,” she said. “A massive piece of legislation that had bipartisan support, that was life changing – literally life changing for millions of Americans – two networks chose not to cover the President’s remarks on that.”

Iger reportedly called Jarrett before the network announced the cancellation to apologize to her. 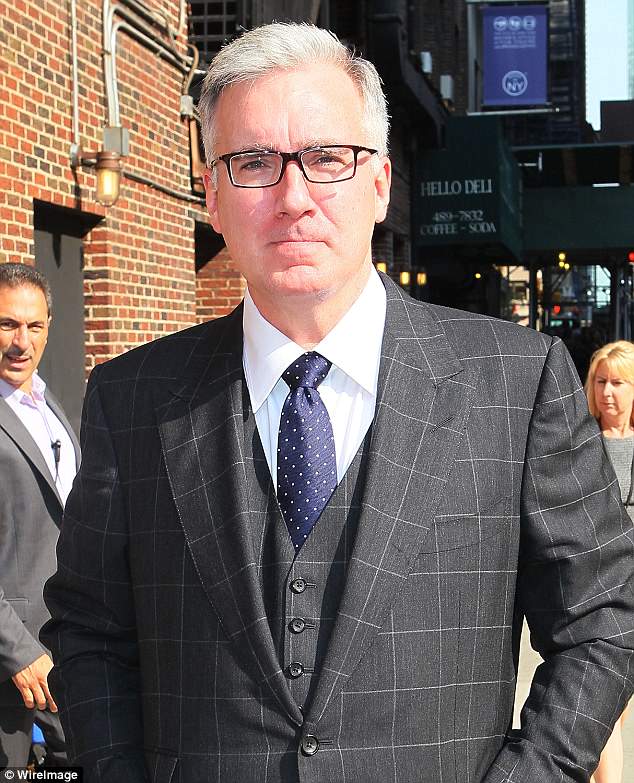 The White House used liberal journalist Keith Olbermann as an example of bias against Trump. 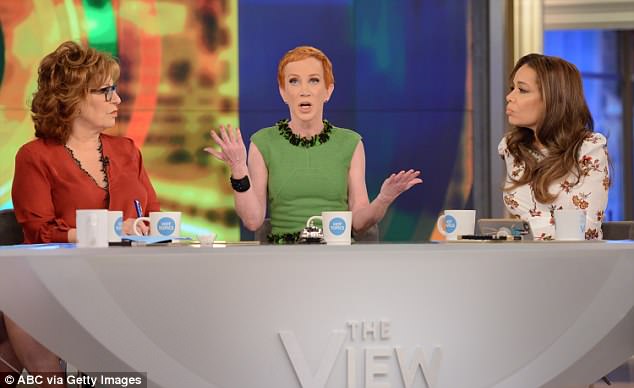 Kathy Griffin apologized for a photo of her shown on ‘The View’ holding a bloody, decapitated head of the president. She later took the apology back.

‘He wanted me to know before he made it public that he was canceling the show,’ Jarrett told MSNBC.

Jarrett, who was Obama’s senior adviser during his presidency, was born in Iran to American parents and lived in Shiraz for six years.

Trump, in his tweet Wednesday, complained he never got a call from Iger with an apology.

Iger confirmed to Vogue magazine in April that he had thought of challenging Trump in 2020 with a presidential bid but decided instead to focus on his work at Disney, which had just purchased 21st Century Fox.