Why are women still being denied breast reconstruction?

Having operated on thousands of women with breast cancer, few people are as familiar with its realities as Ruth Waters (pictured)

Having operated on thousands of women with breast cancer, few people are as familiar with its realities as Ruth Waters.

As a consultant plastic surgeon who specialises in a complex type of mastectomy, which involves rebuilding women’s breasts using their own tissue, Miss Waters believes every woman has the right to wake from breast cancer surgery ‘feeling like herself’ again.

It is a belief rooted in her own experience — not only her 21 years of expertise, but as a patient. For the mother of two was herself diagnosed with breast cancer at 41.

‘The prospect of losing a breast can be devastating since it is at the heart of our femininity,’ says Miss Waters. ‘Doctors have to understand the importance of reconstruction.’

For 17 years, Miss Waters has been doing the DIEP flap procedure, in which blood vessels called deep inferior epigastric perforators (DIEP) as well as the skin and fat connected to them, are removed from the lower abdomen and transferred to the chest to reconstruct a breast.

It takes ten hours, and its success hinges on stitching together the blood vessels, which are 3mm wide.

For all its technical challenges, Miss Waters, 58, believes it is worth it. However, she says, many women miss out on reconstructive surgery.

‘The guidelines state that all women should be offered reconstruction,’ says Miss Waters. ‘But not all hospitals offer operations like the DIEP flap, as they have to be done by plastic surgeons rather than a general breast surgeon.

‘But women are entitled to know their options. With the DIEP flap, for example, using a patient’s own skin and fat is wonderful because it mimics breast tissue.’

Out of 23,000 mastectomies performed on the NHS every year only 21 per cent of women have an immediate reconstruction. While some women won’t want it, there are concerns that this is lower than it should be.

It can be a matter of cost. NHS trusts will pay a certain amount for the operation — say around £7,000 — but this type of surgery can cost up to £20,000, so some don’t regard it as cost effective.

But as Miss Waters counters: ‘Implants don’t last for ever but with operations such as the DIEP flap, once it is done it is done. So the cost to the NHS is less.’ The surgeon can be seen in action in a new BBC series which goes behind the theatre doors at the Queen Elizabeth Hospital in Birmingham, to witness some of the UK’s pioneering surgeons at work. 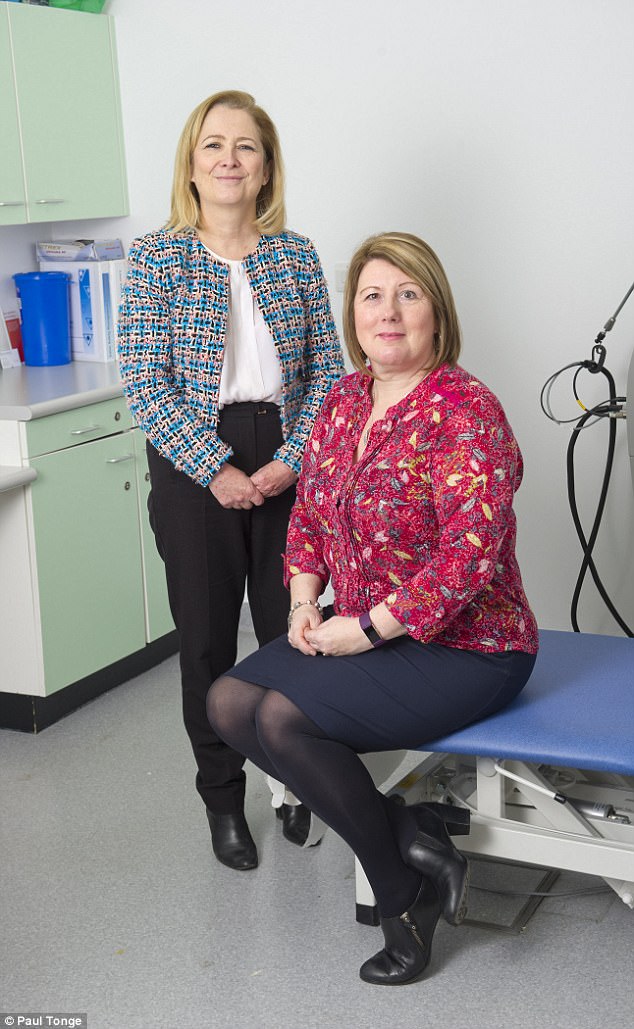 As a consultant plastic surgeon who specialises in a complex type of mastectomy, which involves rebuilding women’s breasts using their own tissue, Miss Waters believes every woman has the right to wake from breast cancer surgery ‘feeling like herself’ again

Despite facing women dealing with breast cancer on a daily basis, Miss Waters says she never imagined she would get the disease, too.

‘Naive perhaps, but breast cancer was not on my radar,’ she admits. She discovered the lump during a skiing holiday, guessing it had been there for a few months. ‘I knew from the hard feel it could be cancer,’ says Miss Waters, who lives in Leicester with husband Mark, a pharmacologist.

Experiencing life on the other side of the consulting room was difficult. ‘My medical training didn’t mitigate the shock I felt,’ she says. ‘My daughters were then four and seven. I desperately wanted to survive.’ The cancer was grade three (a measure of a cancer’s aggressiveness, with one the lowest and three the highest) and Miss Waters says her ‘gut reaction was to have a mastectomy’.

However, the reconstructive surgery she now performs was only just being introduced. After much reflection, she opted for surgery to remove the lump rather than full mastectomy, followed by six cycles of chemotherapy, then daily radiotherapy for three weeks. 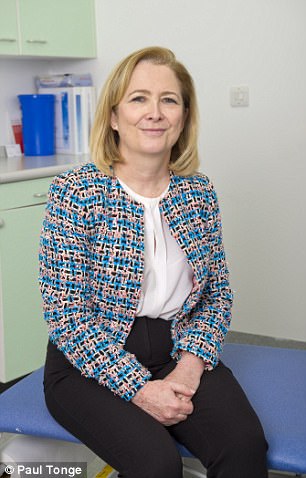 In the new series, she is filmed performing the DIEP flap on mother-of-two Donna Wilson-Mills after a mastectomy. Amazingly Donna had no idea Miss Waters previously had breast cancer

Astonishingly, during her treatment Miss Waters continued to operate. ‘I wore a wig under my surgical cap and didn’t advertise my illness to my patients. I could really understand their terror and desire to feel like the person they were before.’

In the new series, she is filmed performing the DIEP flap on mother-of-two Donna Wilson-Mills after a mastectomy. Amazingly Donna had no idea Miss Waters previously had breast cancer.

‘I always felt she understood and she really did,’ says Donna. ‘And she did the most amazing thing for me. I thought my breasts would feel numb. But I can feel them, they feel part of me. I really feel like I have my life back.’

It’s a phrase which has become something of a mantra for Miss Waters and one she hopes other doctors understand, too.

‘I want my patients to leave my care and still feel whole. It’s every woman’s right to get her life back. It’s what I have in common with my patients. For I’m just as determined to have that for me, too.’

Surgeons: At The Edge Of Life is on BBC 2 at 9pm next Monday.

What of the other advantage so often touted when robots take over jobs from humans: that they work quicker and more cheaply?

Evidence suggests this is not the case. Quite the opposite. In Professor David Jayne’s study on operations for rectal cancer, robot ops took on average 37.5 minutes more than human ones.

Studies on other types of robot surgery report similar demands for extra time in operating theatres. Why? While we might imagine that robo-ops involve patients lying on operating tables while teams of Cadbury’s Smash Martians get busy around them, that’s not how they work at all.

Robot-assisted surgery is convoluted. The patient must be positioned precisely in order for the robot arms to reach the desired organ and tissues and so perform the operation.

First, while lying on their backs under general anaesthetic, typically patients are strapped to the table with their feet hoisted up in stirrups. The table is then swung down backwards, so the patient is head-down at 45 degrees. Surgeons call this posture the ‘steep Trendelenburg’ — it looks like a medieval punishment. And this ‘precarious positioning’ demands significant extra work and care, according to a report published last November in the British Journal of Anaesthesia.

The study, by doctors and anaesthetists at the Royal Marsden Hospital and Imperial College London, warned that patients left in this position for the time required for surgery — often up to four hours — can develop complications that include injuries to their cornea and nerve damage in their hands and feet. These can be caused by unnatural pressures that result from being held in this position for prolonged periods, the researchers said.

They added that if doctors aren’t careful to monitor potential risks, the position may also cause dangerous build-up of fluid in the brain and lungs — which can cause post-operative confusion, reduced consciousness and damage to muscles — as well as blood clots that can lead to strokes.