Australians have little chance of getting a pay rise unless they change career with the Covid pandemic shattering old assumptions about lower unemployment.

An unemployment rate below 5 per cent has historically resulted in decent pay rises but the Budget forecast that was no longer the case, with wage growth to remain under 3 per cent through to 2025.

‘The outlook for wage growth is expected to remain moderate over the forecast period,’ the Budget papers said.

‘This reflects both the severe impacts of the pandemic and the continued spare capacity in the labour market in the near-term.’

Australians are set to miss out on pay rises unless they strategically change career with the Covid pandemic shattering old assumptions about lower unemployment. Pictured are Sydney nurses

The Non-Accelerating Inflation Rate of Unemployment is the theory wages rise at a faster than usual pace if the jobless level falls to a certain point.

For a long economists have thought wages would rise at a faster pace if unemployment fell below 5 per cent – and that was certainly the case between May 2006 and January 2009.

Treasury analysts still believe in the NAIRU theory but are now suggesting unemployment would have to fall to 4 per cent before wages growth climbed back above the long-term average of 3 per cent.

The Phillips curve theory, developed by New Zealand economist Williams Phillips during the 1950s, observed an inverse relationship between unemployment and inflation.

But the 1970s oil crisis led to higher unemployment and inflation – a global situation known as stagflation.

In Australia now, inflation is very low at just 1.1 per cent – a level well below the Reserve Bank’s 2 to 3 per cent target.

Unemployment is also low at 5.6 per cent and the wage price index last year stood at 1.4 per cent.

Between May 2006 and January 2009, Australia’s unemployment rate never rose above 5 per cent as wage growth remained above 4 per cent during the mining boom, Australian Bureau of Statistics data showed.

But ever since the Global Financial Crisis, Australians have missed out on decent pay increases, with annual pay levels stuck below 3 per cent since mid-2013.

Wages last year grew by a miserable 1.4 per cent, with pay levels in the September quarter edging up by a record-low of 0.1 per cent.

The Budget revealed that Treasury expected pay rise levels to be stuck at 2.75 per cent by the middle of 2025.

This was despite its forecasts of unemployment, now at 5.6 per cent, falling to 5 per cent by June 2022, as Australia remained closed to foreigners.

Treasury has revealed it would need to be lower still – closer to 4 per cent – before wages can increase at a decent pace.

That was a revision of the pre-pandemic assumption that wages would start to rise as soon as unemployment fell below five per cent.

‘This is due to structural trends such as increased competition in goods markets, increases in services being provided internationally, advances in technology, and changes in the supply of labour.

‘Declining inflationary and wage pressures over recent years despite low and declining rates of unemployment have provided evidence that the (Non-Accelerating Inflation Rate of Unemployment) NAIRU has been lower than previously thought.’

Low wage growth meant there was little chance of the Reserve Bank of Australia lifting interest rates for years to come. 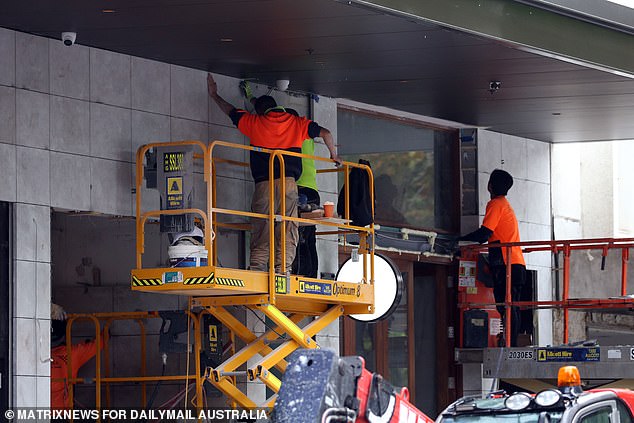 An unemployment rate below 5 per cent has historically coincided with decent pay rises. But Treasury said that was unlikely to occur in coming years, with wages growth to remain at below-average levels under 3 per cent even as the jobless level fell. Pictured are Sydney tradies

The RBA has repeatedly vowed to keep the cash rate at a record low of 0.1 per cent until inflation returned to the 2 to 3 per cent target band and wages rose above 3 per cent.

While most Australians can kiss goodbye to wage rises, some employment sectors have had decent pay increases and could continue to do so.

Australian Bureau of Statistics figures showed public administration and safety workers, including police officers and public servants, saw their salaries rise by 3.8 per cent to $94,874 in the past year.

Finance and insurance salaries stood at $105,669, marking an annual increase of 3.5 per cent. 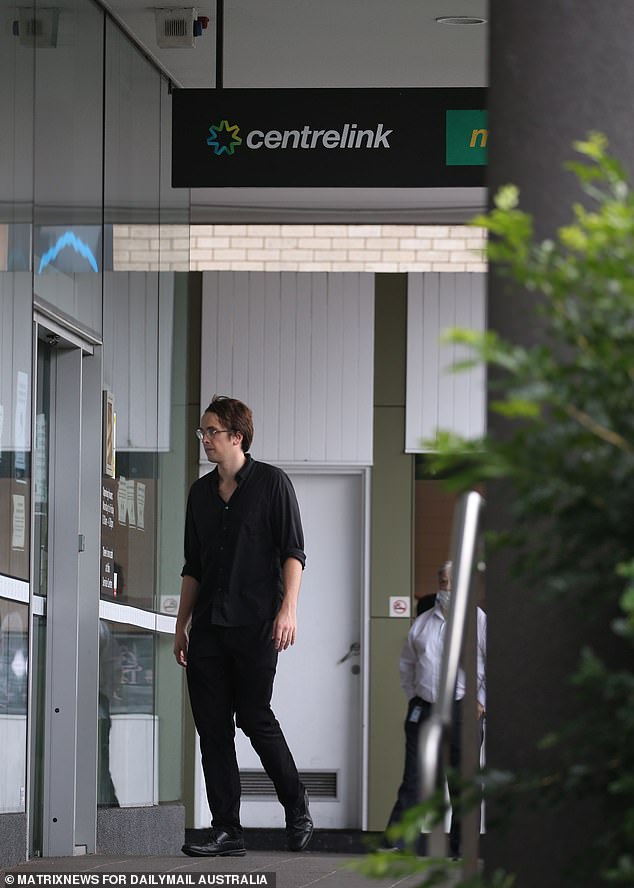 The Non-Accelerating Inflationary Rate of Unemployment, or NAIRU, is a situation where wages rise strongly if the jobless rate falls to a certain level. Pictured is a Sydney Centrelink office 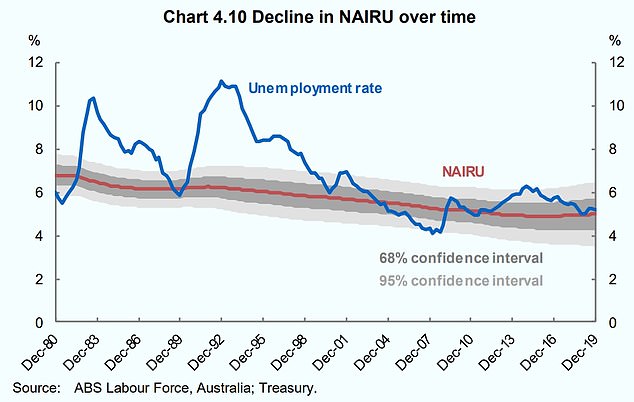 Treasury has revealed unemployment needed to fall closer to 4 per cent for wages to increase at a decent pace. Before the pandemic, it thought wages would start growing strongly again if unemployment fell between 4.5 per cent and 5 per cent

The mining industry had the highest average salary rise of $2,633 equating to a very generous $136,926 a year, although their weekly pay went up by just 0.6 per cent.

In March, Australia’s internet job vacancies tally of 238,700 was the highest since October 2008 with the number of advertised positions surging by 96.4 per cent to be double that of March 2020 during the Covid shutdowns, National Skills Commission data showed.

The volatile building sector, however, has almost tripled its demand for staff during the past year.

Demand for labourers rose by 139.8 per cent while the number of jobs for building site tradies climbed by 181 per cent.

Construction and mining labour jobs had a 154.4 per cent increase.

In some cases, the number of advertised jobs quadrupled with food preparation assistant positions up 273.4 per cent.

The hospitality sector, the worst affected by the Covid shutdowns, is recruiting again with available jobs increasing by 321.6 per cent.

Farm, forestry and garden worker jobs rose by 182.7 per cent.