Younger voters are more likely to back Labor at the May 18 election as it vows to fight climate change and make it easier for them to buy their first home.

Opposition Leader Bill Shorten has gone into the election with a plan to abolish negative gearing tax breaks for future purchases of existing properties.

This is designed to make it easier for people in their 20s and 30s to buy their first homes without having to compete with older investors, especially in Sydney and Melbourne.

Labor has also promised to stop wealthy retirees, who don’t pay income tax, from getting tax refunds when they receive share dividends, under a system known as franking credits.

The Opposition says its winding back of negative gearing and its tax crackdown on shareholders will save $80billion over the next decade.

Labor is also promising bold action to tackle climate change, with a plan to have 50 per cent of Australia’s energy come from renewable sources by 2030.

By that time, Mr Shorten is also vowing that electric cars will make up half of all new vehicle purchases in 11 years, a dramatic increase from the 0.2 per cent share they have now. 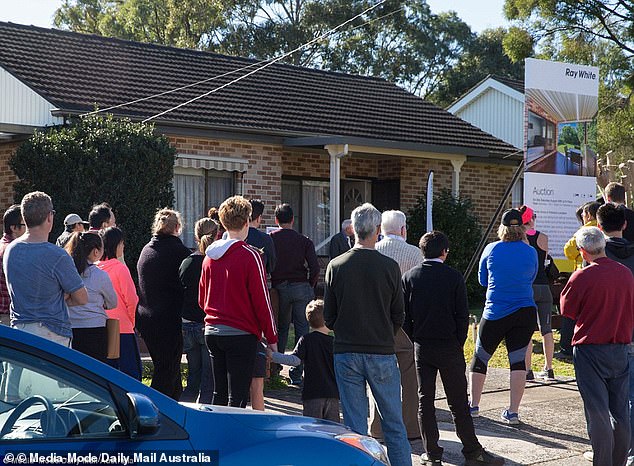 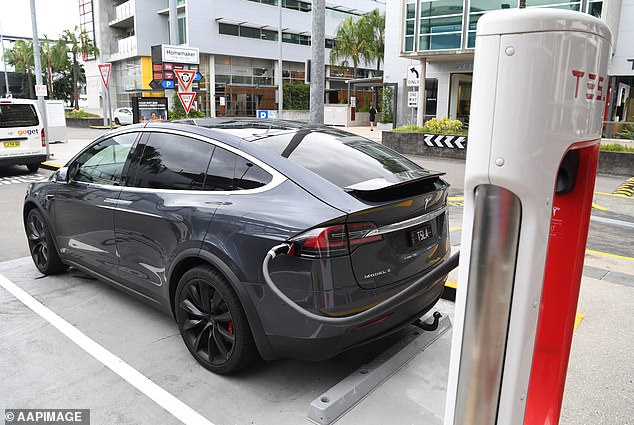 Labor also wants half of all vehicles sold in Australia within 11 years to be electric cars (Tesla Model X pictured), a very dramatic increase from the 0.2 per cent market share they have now

The Liberal Party leader made the election a referendum on the economic management credentials of Labor, which hasn’t delivered a Budget surplus since 1989.

‘To secure your future, the road ahead depends on a strong economy. And that’s why there is so much at stake at at this election,’ he told reporters at Parliament House in Canberra.

‘It’s a choice between a government that I lead and the alternative of a Labor government led by Bill Shorten.

‘I believe in a fair go for those who have a go.’ 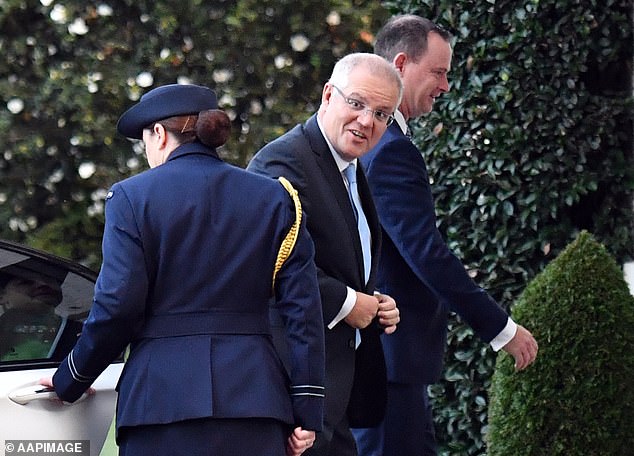 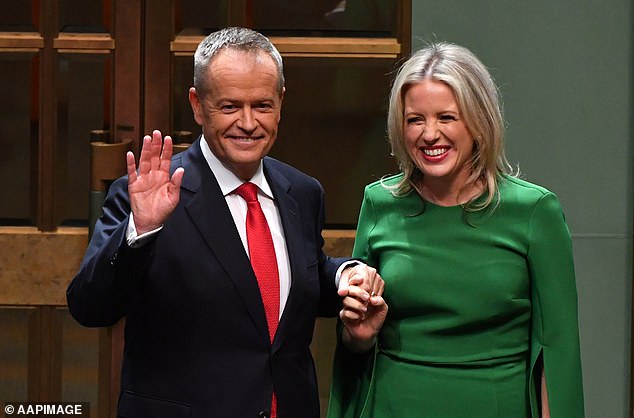 The Liberal-National coalition is seeking a third, three-year term.

Mr Morrison is the third Prime Minister to lead a divided government since the Coalition came to power in 2013, and only took the helm in late August.

Veteran election analyst Malcolm Mackerras said that while Mr Morrison had some popularity in Sydney, he wasn’t particularly well liked across Australia.

‘I just don’t think people think much of him,’ he told Daily Mail Australia.

‘He doesn’t come across to me as being at all competent.

‘He certainly doesn’t come across as deserving to be Prime Minister.’ 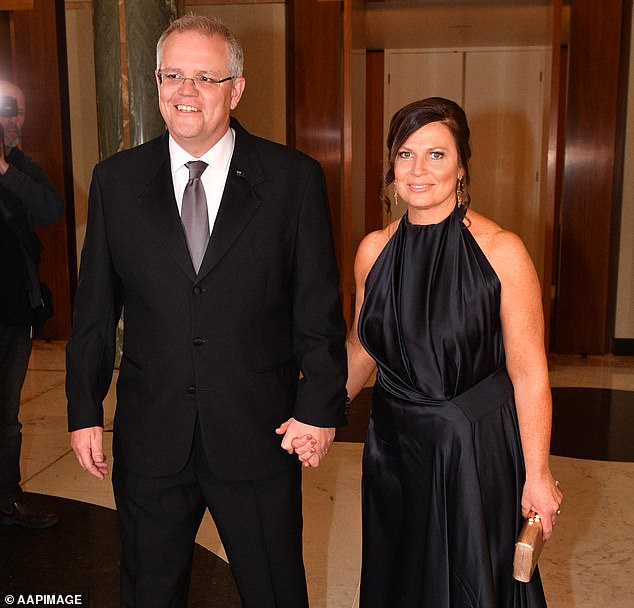 Betting agency Sportsbet is predicting the biggest federal Labor majority in 76 years, in an election where four Liberal ministers would lose their seat.

More than 16.2million voters are heading to the polls in five weeks in an election which could see a government voted out of office for only the eighth time since World War II.

Source: Seats where Labor has the shortest Sportsbet odds. Margins are based on electoral redistributions since the 2016 election, as analysed by Malcolm Mackerras

Mr Shorten told Daily Mail Australia last month his policy agenda was the most ambitious since Gough Whitlam won the 1972 election by campaigning on the theme, ‘It’s Time.’

Mr Morrison called the election a week after his Treasurer Josh Frydenberg delivered a Budget giving annual tax cuts of up to $1,080 for 10 million Australian workers earning up to $126,000 a year.

Mr Shorten has vowed to match the tax cuts and give even more to lower income earners on less than $40,000 a year, who were promised $255 a year in the Budget.

The government, however, is plagued with disunity, having disposed Tony Abbott in September 2015 before right-wing forces brought down his prime ministerial successor Malcolm Turnbull in August 2018.

Both major parties are committed to sending asylum seekers to offshore processing centres at Nauru and Manus Island in Papua New Guinea.

Labor, however, is open about them being allowed to move to New Zealand, following an offer from Kiwi Prime Minister Jacinda Ardern.

When Labor was last in government former prime minister Kevin Rudd in 2008 dismantled the Pacific solution.

Or put another way, the number of asylum seekers surged from 25 to 5,327, figures from a Parliament House research paper showed.

The policy change also coincided with the deaths of 48 people, mainly asylum seekers from Iran and Iraq, as their boat sunk and washed on to cliffs at Christmas Island in December 2010.

The Coalition has now lost 50 Newspolls in a row to Labor, trailing the Opposition 46 to 54 per cent after preferences.

If replicated at the election, the government would suffer a 4.4 per cent swing against it causing the Liberal and National parties to lose 12 seats.

Betting agency Sportsbet, however, has Labor picking up 23 seats from the Coalition, which would see its seat numbers swell to 93 in the expanded 151-member House of Representatives.

The Liberal and National parties would see their seat tally plummet from 75 now to 53, marking the worst electoral drubbing for the conservative side of politics since 1943.

This would give Mr Shorten the biggest federal election majority since March 1996, when John Howard’s Liberal-National Coalition defeated Paul Keating’s Labor Party in a landslide.

It would also mark the biggest Labor majority since John Curtin was prime minister during World War II.

But the betting agency had the Liberal Party winning back former prime minister Malcolm Turnbull’s old seat of Wentworth, in Sydney’s eastern suburbs, as another former PM Tony Abbott narrowly held on to his nearby electorate of Warringah.

Mr Mackerras was less optimistic about Mr Shorten’s chances of a Labor landslide, predicting it will win 83 seats, up from the 69 it won in 2016, and factoring in an electoral redistribution in two Liberal-held seats in Victoria.

The Coalition, under his scenario, would see its seat tally drop from 75 to 64, as the Liberal Party regained the northern Victorian electorate of Indi, where independent Cathy McGowan is retiring. 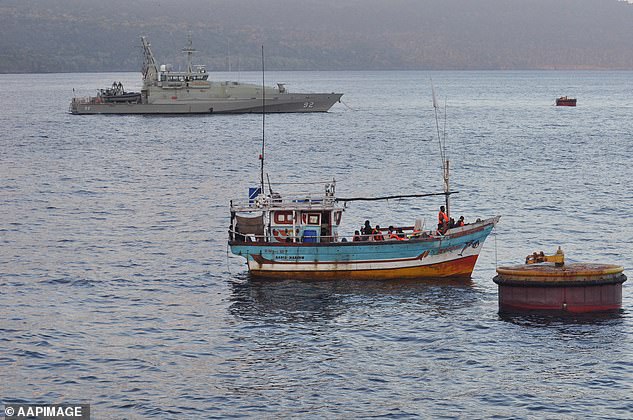 Both major parties are committed to sending asylum seekers to offshore processing centres at Nauru and Manus Island in Papua New Guinea. But when Labor was last in government, boat arrivals surged after it abolished the Pacific solution (asylum seeker boat at Christmas Island pictured)

Mr Turnbull’s old seat of Wentworth could also be another Liberal gain, as Dave Sharma defeated independent Dr Kerryn Phelps, who won an October by-election and pushed the government into minority territory.

‘I think Sharma has a slightly better chance of winning Wentworth than Abbott has of retaining Warringah,’ Mr Mackerras said.

‘Dave Sharma is thought to be a  very good candidate who belongs to basically the moderate side of the party. 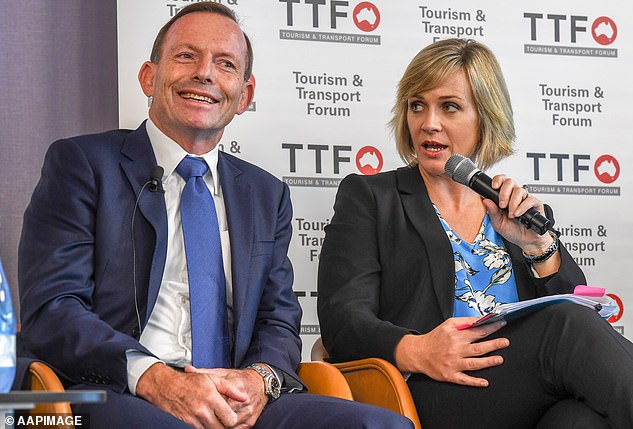 Mr Mackerras also predicted the Nationals would keep their most marginal seat of Capricornia, in central Queensland, despite assistant minister Michelle Landry holding it by a very slim 0.6 per cent margin.

Dawson, in north Queensland, would also stay with the Nationals , with renegade backbencher George Christensen campaigning for the government to fund a coal-fired power station.

‘Areas that are near to possible new coal mines stay will stay with the Nationals,’ Mr Mackerras said.

Electoral state of play in Australia

Betting agency Sportsbet has Labor picking up 23 new seats from the Coalition.

This would see Labor end up with 93 seats out of 151, giving it 61.6 per cent of seats in an expanded House of Representatives.

This would be Labor’s biggest majority haul of seats, in percentage terms, since 1943 when John Curtin was wartime prime minister.

This would also be a bigger win than Bob Hawke’s 1983 victory and Kevin Rudd’s 2007 defeat of John Howard.

It would mark the biggest landslide since 1996, when John Howard’s Liberal-National Coalition defeated Paul Keating’s Labor Party, which had been in power for 13 years.

The Coalition’s seat tally would plummet from 75 now to 53, marking its worst defeat  in 76 years, before the Liberal Party was founded.

Were the betting predictions to materialise, Home Affairs Minister Peter Dutton would lose his Brisbane seat of Dickson while Attorney-General Christian Porter would be defeated in his Perth seat of Pearce.

Aged Care Minister Ken Wyatt, the first indigenous member of the House of Representatives, would also lose his eastern Perth seat of Hasluck while Immigration Minister David Coleman would lose his south-west Sydney seat of Banks.

Former prime minister Tony Abbott is also in danger in his Sydney northern beaches seat of Warringah, against independent challenger and Winter Olympic champion Zali Steggall, although he is narrowly favoured to stay in Parliament.

Former independent Rob Oakeshott is the favourite to claim the New South Wales Mid-North Coast seat of Cowper from the Nationals, where former minister Luke Hartsuyker is retiring.

The Liberal Party could regain the northern Victorian seat of Indi, following the retirement of independent Cathy McGowan.

Were Sportsbet’s scenarios to materialise, Mr Oakeshott would be one of five crossbenchers in the lower house, along with Greens MP Adam Bandt, Centre Alliance’s Rebekha Sharkie, maverick Bob Katter and independent Andrew Wilkie.